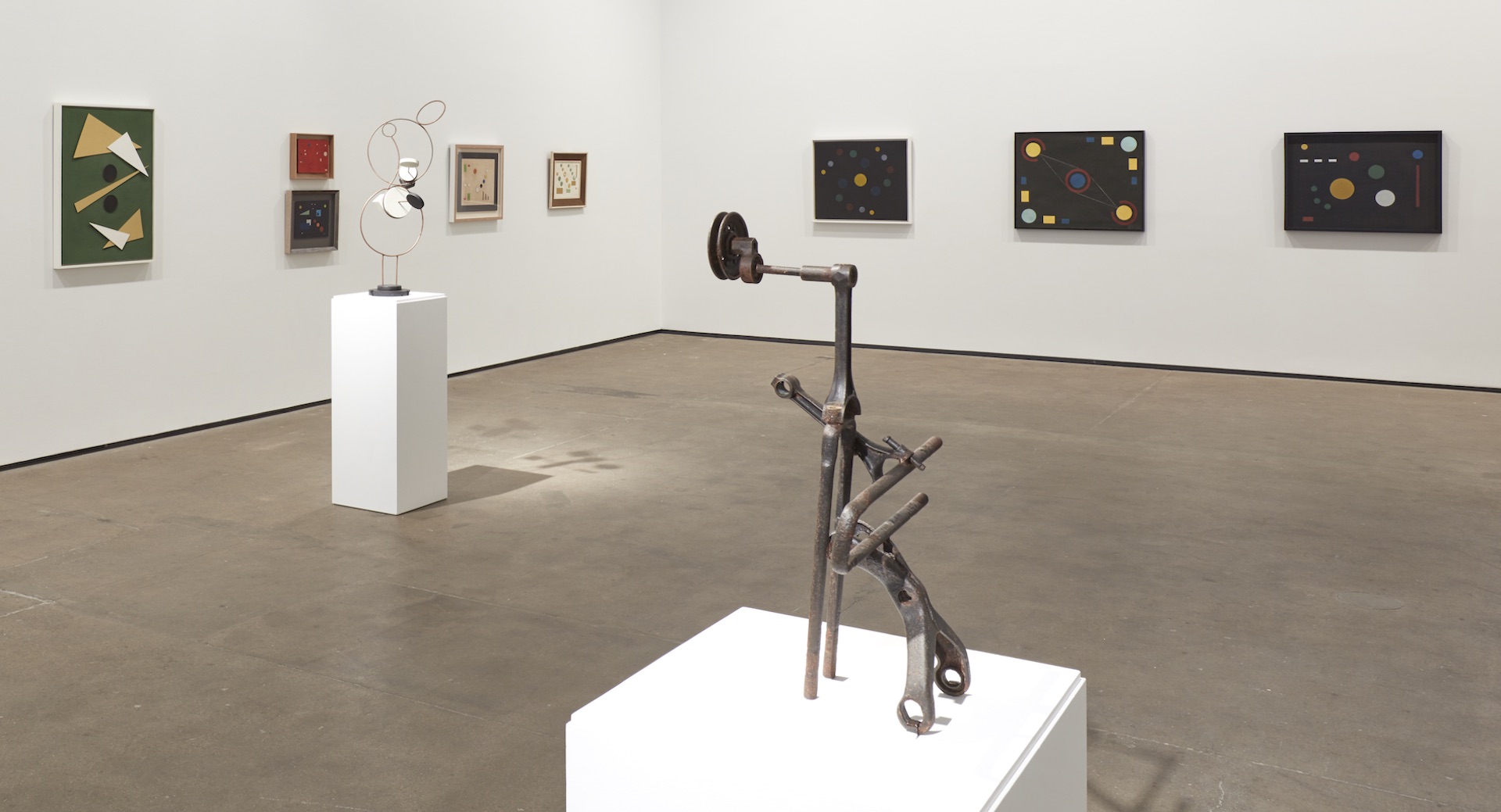 In her 20s, she led an all-women orchestra that played the open-air cafe on the Paseo del Prado. In her 30s, she became an activist, organizer, and politician. And in her late 40s, Dolores Soldevilla Nieto (1901–1971) turned to art.

Now, almost 50 years after her death, Soldevilla—better known as Loló—is having her first large-scale retrospective outside Cuba, at Sean Kelly Gallery in New York.

Constructing Her Universe: Loló Soldevilla surveys the artist’s pioneering exploration of geometric abstraction in paintings, collages, sculptures, and constructions. It also documents her vital role in nurturing and promoting mid-century avant-garde art in Cuba and abroad.

Soldevilla made figurative work throughout her career, said exhibition curator Rafael DiazCasas. So even though the show focuses on her geometric abstractions, it opens with a selection of portraits and a small figurative sculpture.

In 1949, soon after she turned to art, Soldevilla was named Cuba’s cultural attachée to Europe. She moved to Paris and remained there—with periodic trips back to the island—until 1956.

Her position gave her entrée to a wide circle of European and Latin American artists in Paris, including Cubans Wifredo Lam—a close friend who encouraged her in her art—as well as Carmen Herrera, Eduardo Abela, and Servando Cabrera Moreno, whose portrait is in the show.

By 1950, Soldevilla was already starting to experiment with abstraction, and the exhibition includes a small canvas from that year.

After a 1953 visit to London, she turned away from hard-edged abstraction and made the circle the dominant form in her work. “I have changed the entire organization of my paintings,” she wrote.

Swiss artist Sophie Taeuber-Arp was one influence on her work; Wassily Kandinsky was another.

“She developed a personal relationship with Kandinsky’s widow,” DiazCasas said. “She had access to Kandinsky’s archives and studied a lot of his work.” He pointed to two paintings from 1953 in which Kandinsky’s influence is evident.

DiazCasas noted that a small, undated painting with a deep red background was done in response to Large Red Interior, a 1948 work by Henri Matisse. “She created a minimal version of that painting,” he said.

Soldevilla was also “enchanted by the series of Constellations paintings done by Joan Miró,” which she saw in Paris in the late 1940s and early 1950s. They are reflected in her continued exploration of the circle, including a 1960 canvas titled Constelación.

“One of the things you see throughout the work of Loló is collage,” said DiazCasas. As cultural attachée and in her career as an artist, “she was always a traveler,” and collage materials were easy to carry and work with as she moved from place to place. “She fell in love with collage, and it’s an important part of her body of work.”

One wall of the gallery features an arrangement of collages on paper, along with paintings and constructions that use collage as a compositional approach.

Across the gallery DiazCasas pointed out another collage, done in 1955, with cardboard shapes arranged on a solid background. “It’s the idea of elements that move in and out of the picture plane,” he explained.

For DiazCasas, Soldevilla’s work as a sculptor should have been enough to earn her a solid place in Cuban art history. “The idea of being playful—of moving pieces around, the interaction—was very striking,” he said.

He approached an untitled sculpture from around 1954 and gave its iron wheel a spin. “This one moves, but not much, since this is an early work. But the idea of that interaction is important. She was very eager for people to touch the art, to move with it.”

Another sculpture from 1954—a bronze work encased in a vitrine—was also made to be manipulated by viewers.

Made the following year, Untitled (El Damero) was especially constructed for movement, with each cube capable of adjustment.

“She was the first person in Cuba, and one of the first in Latin America, to introduce large sculptures that were fully interactive,” DiazCasas said. In Havana, her 1966 exhibition at Galería Habana included close to three dozen sculptural objects that viewers “were moving around and playing around with,” he said.

“Visitors were able to jump into it [the exhibition], play with it, interact with it,” he said. “And that is something that has not been recorded in Cuban art history.”

At Sean Kelly, vitrines in the center of the main gallery display a selection of rare photographs, catalogues, and other documents.

This material chronicles not only Soldevilla’s career as an artist but her far-reaching influence in promoting abstraction and contemporary Cuban art. This includes Galería de Arte Color Luz, which she founded with her third husband, artist Pedro de Oraá, and her involvement in the pioneering group Diez Pintores Concretos (Ten Concrete Painters).

Most of the documentation is from DiazCasas’s own collection, but other archives, including Archivo CIFO Veigas in Havana, also lent pieces.

Ten or more private collections lent artworks to the exhibition, including Ella Fontanals Cisneros and CIFO. The exhibition has been in active development for three years, though DiazCasas has been conducting research for more than a decade.

The exhibition is accompanied by a 208-page catalogue, with essays by DiazCasas and art historian and curator Olga Viso, with a chronology that traces Soldevilla’s career in detail.