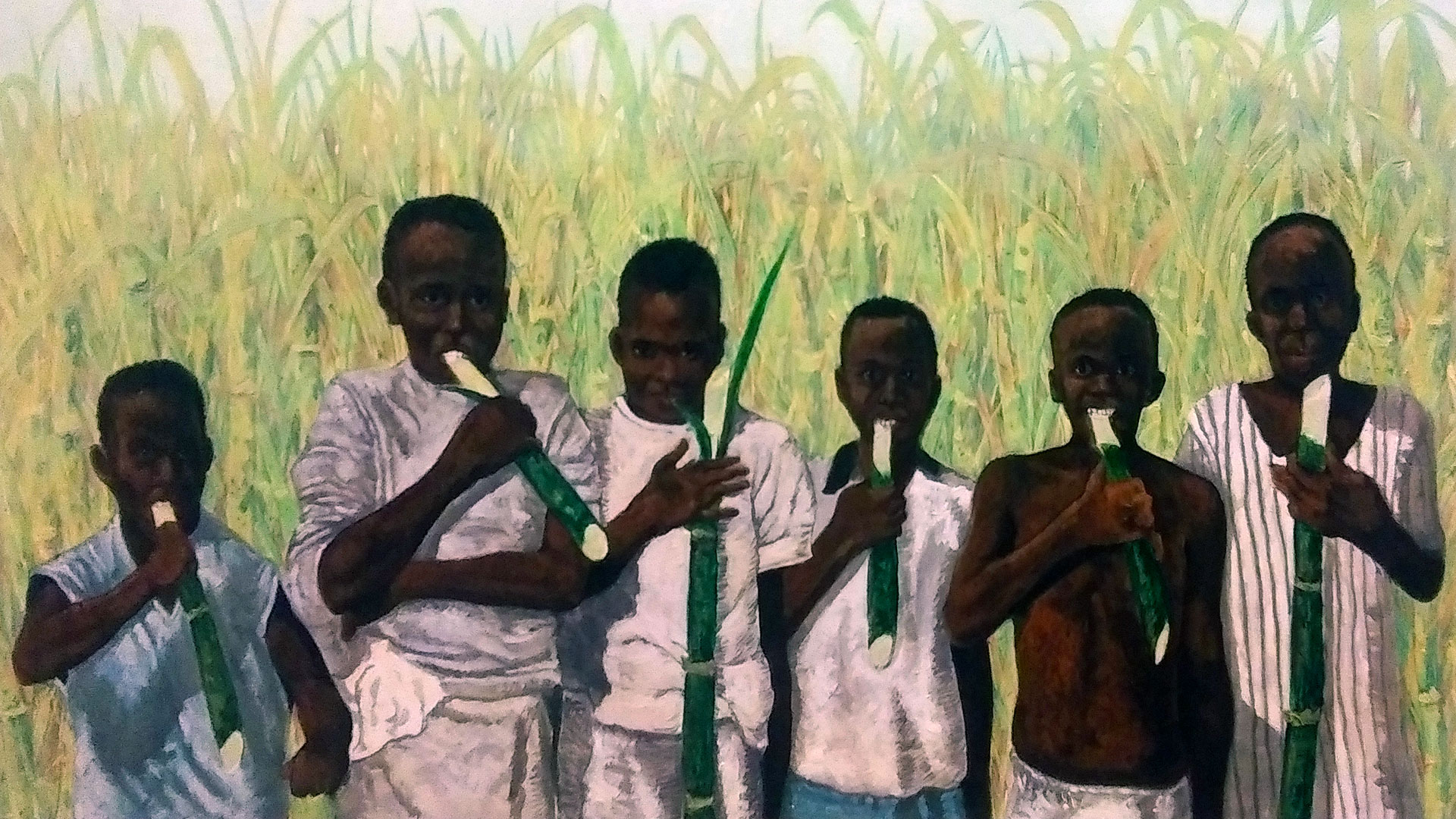 Unlike most historical surveys, the exhibition Nada Personal (Nothing Personal), begins in the present moment.

“Contemporary art,” says curator Roberto Cobas Amate, “is where the frictions between the races, the theme of racism, is most evident.” And racism, he adds, continues to be an unresolved problem.

With the title Nada Personal, says Cobas Amate, the curators wanted to point out that racism is generally not about a specific person. “It’s against the race, against the color of the skin,” Cobas Amate says.

In the Edificio Cubano of the Museo Nacional de Bellas Artes, the exhibition begins just outside the gallery, with Día de Reyes (2019), a large-scale painting by Juan Roberto Diago. “A current work,” says Cobas Amate, “in which he expresses his militant opposition to racism.”

Cobas Amate points out a phrase at the center of the canvas: Tu odio no me mata (Your hate does not kill me). At the upper right is another: Soy humano igual que tu (I am human, the same as you).

Cobas Amate’s colleague, Laura Arañó Arencibia, was largely responsible for curating the show’s contemporary section. She points out that Diago’s work completely rethinks a 19th-century painting on this theme by Victor Patricio Landaluze, which appears later in the show. “It’s totally opposite” to the racial stereotypes that Landaluze pictured, she says.

Other important artists that “we couldn’t fail to include” are Santiago Rodríguez Olazabal, José Bedia, and Manuel Mendive, she adds.

“They are artists who throughout their careers, took a type of anthropological approach toward Afro-Cuban religions and their intersections with the culture.”

At several points, the exhibition features brief wall texts by other scholars and curators, who speak about individual artists—for instance, Orlando Hernández’s commentary on José Bedia, seen in the image above.

“From the beginning, we wanted the public to have access to specialists who have worked with those artists,” says Cobas Amate. “So at different moments in the exhibition, we utilize texts to help with that communication.”

Another interesting aspect of the exhibition, says Arañó Arencibia, is that “there are several young artists who have been working with race-related themes and haven’t been included in many shows.”

Among them is Susana Pilar Delahante, represented by the installation Un chino llega a Matanzas… (2015) and the 2017 performance video Dibujo intercontinental (Intercontinental Drawing). “In her body she bears the weight of migration and her African antecedents,” says Arañó Arencibia of Delahante’s performance.

Ariamna Contino and Alex Hernández “approach the theme of racism from the perspective of genetics and perception,” Arañó Arencibia says as we come to their installation. “These are maps that indicate the genetic origins, the continents, that genetically form Cuba. A map of Europe, of the Americas and of Africa, showing the points of origin for the largest genetic pools in the Cuban population.”

The exhibition also includes two works by Belkis Ayón, as well as a work by Jesús de Armas, chosen specifically because it references the indigenous population in Cuba that was wiped out with the arrival of the Spaniards. “It was important, in this show, to point out that from the 16th century, there was a very serious conflict about race,” says Cobas Amate.

We approach Cuando Encontro Para Vencer (2000), a large work by Marta María Pérez, an artist who “has built her career on this fundamental connection between Africa and Cuba,” says Arañó Arencibia.

“It’s about the transculturation of Africans arriving in Cuba. It’s also interesting because Marta María is a white artist who understands that Afro-Cuban culture is part of Cuban culture,” she says.

That was the moment, he says, when René Portocarrero launched his series Color de Cuba. “He mixed religious and racial elements in figures of national identity,” says Cobas Amate.

We pause in front of two paintings from the 1950s by Adigio Benítez. “There was a lot of abstraction in the 1950s,” Cobas Amate says. “Adigio Benítez was one of the only artists in that era who maintained a practice of realistic figuration and social character.”

“Although many times he is excluded from Cuban art history, it was important to incorporate him in this show, because of the difference between him and the rest of the Cuban painters with their abstraction,” Cobas Amate continues. “His figuration in a realistic, social manner is linked with the black race.”

We move to the first half of the 1940s. “In this period,” says Cobas Amate, “José Lezama Lima and the Origines group were linked in a current of white criollo Spaniards. Black Cubans were completely excluded. Because the culture to which they responded was white, of Spanish origins.”

He points out a René Portocarrero canvas titled La cena. “Here, the figures aren’t communicating. The black figures are looking away, in different directions, and the white figures are absorbed in their thoughts. I think it represents a bit of the racial conflict that exists at that moment.”

We stop at an arrangement of works set on plinths. “This is a very important sculptor, Teodoro Ramos Blanco,” says Cobas Amate. “A sculptor of the 1930s who worked with the theme of the image of blacks.”

“For me, this is a fascinating painting,” Cobas Amate says, stopping in front of Primera comunión (1930) by María Capdevilla. “There is a strong contrast between the white of the clothing against the physiognomy of the faces, and for me it’s very affecting.”

Moving back in time, we arrive at the paintings by Victor Patricio Landaluze, including Día de los Reyes en La Habana, with its stereotypical depictions of black Cubans.

The show ends with El músico Quiroga by Vicente Escobar, an artist who was active at the end of the 18th century and beginning of the 19th. “He mostly painted white subjects,” says Cobas Amate. “This is an exceptional work. It portrays a black musician who ascended the social ladder.”

But Escobar himself is a more fascinating figure. “He contains the contradictions of the epoch, and the racial contradictions that persist to today,” says Cobas Amate.

“We leave the visitor, the public, with that thought. What a meditation, that it’s possible to be born black and die white.

“Much easier,” says Cobas Amate with a laugh, “than Michael Jackson.”

Nada Personal is one of five exhibitions presented at the Museo Nacional de Bellas Artes under the theme “La posibilidad infinita: Pensar la nación.” All five exhibitions remain on view through September 30.