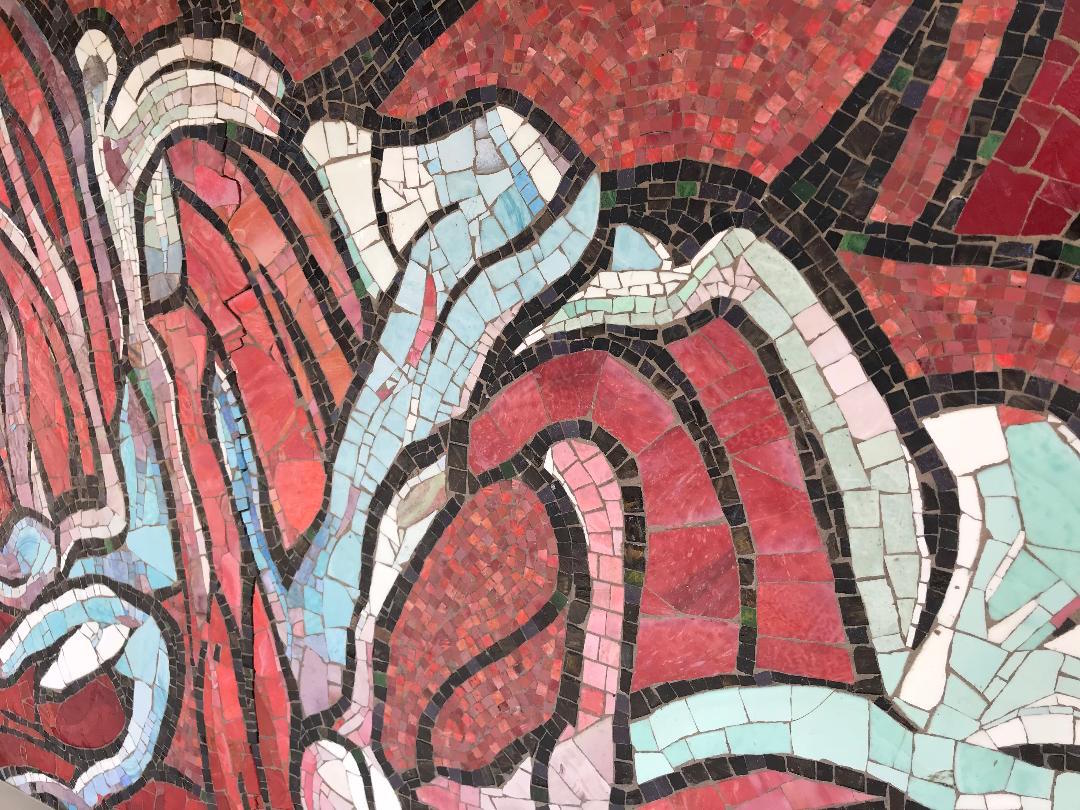 In the United States, South Florida has long been a leader in commissioning public art, including works by Cuban and Cuban American artists. But this past year has seen a number of notable works in the New York area, and just recently in Southern California. Here’s a quick look at some of the installations that have debuted in the past year.

In New York, the Metropolitan Transit Authority (MTA) is in charge of the city’s transit system, including its subways and the commuter railroads to suburban Westchester and Long Island. Over the years, the MTA’s Arts & Design program has commissioned more than 300 site-specific works of art in subway and commuter train stations throughout the MTA system—including three recent additions.

To flow, says Emilio Perez, is to move along steadily and continuously—a fitting description of an efficient transit system, and an inherent quality in his art. Perez’s abstract installation Fluxus / Rhythmus consists of six mosaic murals, each 40 feet long—three on the northbound side of the station and three on the southbound.

“The long horizontal format invites you to absorb the works while in motion,” Perez wrote in a statement about the work. “From the moving trains and from across the platform, the images will introduce splashes of vibrant color broken up by the support columns.”

In an email conversation with Cuban Art News, Perez wrote that Fluxus / Rhythmus is the first of his works to be translated into mosaic tile. “It was important for the mosaic to reflect the variations of color in a brushstroke to create the sense of movement,” he wrote. “What I discovered is that the process used for making the different color glass creates variations of tone much like a brushstroke. This made for a seamless transition of materials.”

Perez’s installation is so new that it’s not yet completed. The station’s southbound platform is undergoing reconstruction, and until that’s finished, the three murals on that side cannot be installed. But the station is open to the public, and the three murals on the northbound side are in place and visible to commuters.

First established in 1851, the town of Brentwood now has a majority-Hispanic population, primarily from countries in Central and South America. That’s one reason that Armando Mariño selected the Brentwood station as the site for his work, The Guardian Angel, which was unveiled in November.

“With this work, I try to connect the past and the present of Brentwood,” Mariño wrote in a statement about the project. The focus of his work is an owl—a protector spirit of the town, according to a local story dating from 1877—and native flowers representing the demographic mix of Brentwood’s population: Mexican dahlias, Peruvian cantua buxifolia, the Salvadorean flor de izote, and native flowers of Long Island.

“This ‘ecologically impossible foliage’ meets reality on the surface of the painting,” Mariño wrote. He chose to execute the work in laminated glass to capture the transparency and luminosity of the original watercolor. And, he noted, glass needs to be handled gently, like the balance and harmony of every society.

Atlanta-born artist Rico Gatson isn’t Cuban, but one of the eight subjects of his Beacons installation is an international icon of Cuban music.

For his series of subway portraits, Gatson chose Celia Cruz—along with Supreme Court Justice Sonia Sotomayor, musician and bandleader Tito Puente, writer James Baldwin, and four other cultural figures, as individuals who “have had an influence on the community in the Bronx or have attained international acclaim for their cultural, political, and artistic contributions,” Gatson told the art website Hyperallergic.

Gatson sourced photographs of Cruz and the others, which were then translated into glass mosaics. Each figure radiates colorful, sharply geometric beams of light.

The installation of Beacons was part of a five-month renovation of the 167th Street station, which reopened earlier this month.

Gatson appreciated the opportunity to pay homage to his heroes in such a permanent, public installation. “Beacons is my way of thanking the Bronx for the inspiration it has given to me,” he told the Gothamist website, “to these eight giants of their respective fields, and to the city in general.”

The 2016 attack at Pulse, a gay nightclub in Orlando, Florida, left 49 people dead and many more wounded. In the aftermath of the tragedy, the State of New York commissioned an official monument to the LGBTQ community.

Designed by Georgia-born, Cuban American artist Anthony Goicolea, the monument consists of nine realistic looking boulders arranged in an informal circle. Cast in bronze, the rocks are split in two. In eight of them, the gap is filled with faceted glass that catches and refracts the light. The largest boulder remains split, its inner surfaces bearing quotes from the poet Audre Lorde.

The memorial was unveiled this past summer, on June 24, with Governor Andrew Cuomo and other city and state officials in attendance.

“What’s interesting to me is that these objects have been broken, literally ripped apart and split in two,” Goicolea said about the work in an interview in Artspace. “And yet they unite again in a way that is more beautiful than they were originally.

“Holding them together are the conditions for a rainbow—accepting ambient light into their cores, and then projecting out into the world a rainbow of color. They’re not unlike the community they represent.”

Enrique Martínez Celaya: The Landmark, The Gambler, and The Crown

Late last month, the Huntington installed three works by Enrique Martínez Celaya. On loan from the artist, the works mark the beginning of a two-year fellowship for Martínez at the Huntington, in which he will create two interventions in the museum’s collections and give a public talk for each project.

The Landmark (2016), a six-foot-high human head positioned on its side, and The Gambler (2010), a life-sized sculpture of a boy on crutches bearing a house on his back, are on view in a garden just off the Huntington’s American art galleries. The Crown (2015), a fairy-tale-like image of a boy in a forest, is presented in the gallery.

We invite you to send information about new and upcoming public art projects by Cuban artists, in the US and elsewhere. Just click on “Submit News” at the bottom of the screen.