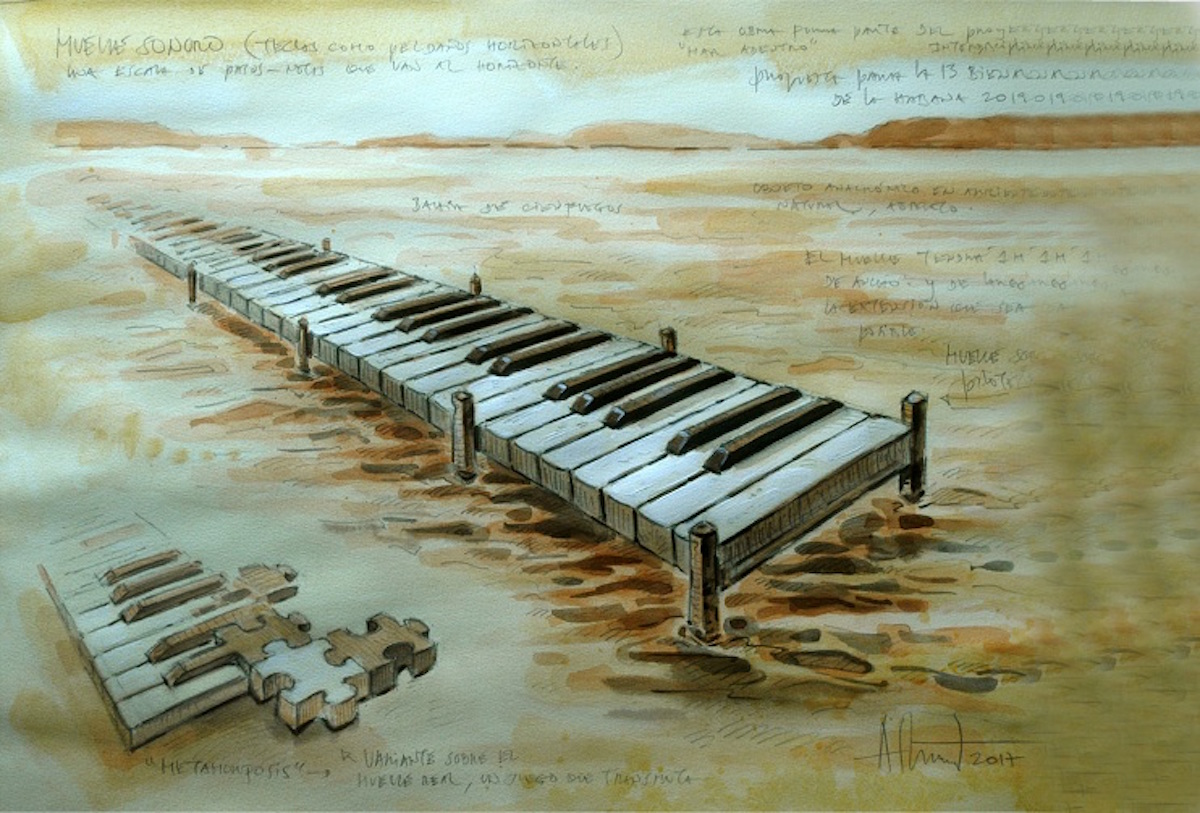 With just about three months to go, the 13th Havana Biennial is taking shape.

Opening April 12 and running through May 12, Cuba’s most important art event is expected to once again bring the international art world to Havana.

Postponed due to damage from Hurricane Irma in 2017, the 13th edition expands the Biennial’s reach in Havana and around the island, under the theme La Construcción de lo Posible (The Construction of the Possible).

Curators and government officials announced details at a press conference in Havana just before the holidays.

Some 235 artists from almost 50 countries—primarily in Latin America, Africa, and the Caribbean—are expected to participate. Among them are approximately 70 Cuban artists, including Cuban National Art Award winners Manuel Mendive and René Francisco Rodríguez.

Detrás del muro (Behind the Wall), one of the most popular exhibitions of the past two Biennials, will return in expanded form, under the theme of “liquid scenario.” Produced by Juan Delgado, this year’s presentation of public art projects will stretch even farther along the Malecón—some six kilometers (almost four miles)—with more than 70 artists invited to participate.

Among them are Cuban American artists Emilio Perez, who participated in the 2015 edition, and Enrique Martínez Celaya, who is making his “Detrás del muro” debut with a sculpture installation titled The Sugar House.

In a statement on the project’s website, Delgado noted that Detrás del muro has been invited by the Office of the Historian of Havana to join the celebrations for the city’s 500th anniversary, which will take place in November.

Another Biennial project is also part of the 500th anniversary. Led by architect Vilma Bartolomé of Laboratorio 26 and the Espacios Project, the Calle Línea Cultural Corridor will foreground the many cultural institutions—galleries, theaters, and other organizations—that line the three-kilometer (almost two-mile) –long street.

Running through the Vedado district to the Malecón, Calle Línea is one of the city’s central arteries. The Cultural Corridor is just one aspect of the Calle Línea refurbishment. As part of the 500th-anniversary preparations, the project also calls for new landscaping along the center island dividing the traffic, and for graphic designs on the street itself, with the participation of local residents.

Other projects are international initiatives. Wilfredo Prieto has invited artists from Mexico, Brazil, Austria, and Spain to participate in Taller Chullima, a collective project based in Prieto’s studio, a former shipyard on the bank of the Almendares River, on the border between the Vedado and Playa districts.

Perhaps the biggest change in this year’s Biennial is its expansion to other parts of the country. In Pinar del Río, artist Juan Carlos Rodríguez is coordinating a project known as La Farmacía (The Pharmacy). In Matanzas, Cuiban American artist María Magdalena Campos-Pons is coordinating Ríos intermitentes (Intermittent Rivers).

Five artists in Cienfuegos will present Mar adentro (Inner Sea), a series of public projects sited around the Bahía de Cienfuego. In Camagüey, the annual International Video Art Festival will become part of this year’s Biennial. A collateral project is also expected to be presented in Santiago de Cuba.

In Havana, dozens of cultural organizations are taking part, from the Biennial’s home base at the Wifredo Lam Center to the Museo Nacional de Bellas Artes, Factoría Habana, the Pabellón Cuba, and Galería Villa Manuela.

Timed to coincide with the Biennial, the Italy-based international art gallery Galleria Continua has announced plans to open “El País del Arte,” a multidisciplinary art space created in collaboration with the Cuban government, an anonymous collector, and Italian artist Michelangelo Pistoletto, who is represented by the gallery.

As the Biennial draws nearer, Cuban Art News will report on different aspects of the event in greater detail. Up next: What’s new in Detrás del muro.