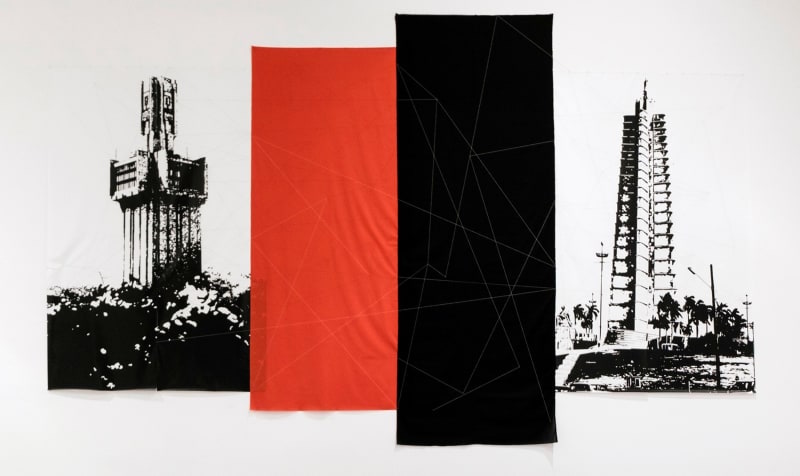 Art Basel opens today, with two days of private viewing before opening to the public June 14­–17. Here’s our roundup of where to see top Cuban art and artists at the fairs.

Galleria Alfonso Artiaco. Untitled XXII (torture), a 2015 photograph by Andres Serrano, is one of the works presented by this Naples–based gallery. Hall 2.0, Stand A10.

Annet Gelink Gallery. Two conceptual works by Wilfredo Prieto, Cork wire from champagne bottle, stretched and The soap and the spring flirt, while someone else is making a transaction in the black market(both 2018), are on view here. Hall 2.1, Stand K13.

Alison Jacques Gallery. Ana Mendieta’s Untitled (1982), a delicate drawing on a leaf, is among the works presented by this London gallery. Hall 2.1, Stand S21.

Galerie Peter Kilchmann. The gallery just opened a show by Los Carpinteros in Zürich, but they saved a show-stopper for Art Basel: Piscina Olímpica, a 2017 sculpture that lists “ice” as one of its materials. Also on view: Eating roses in the rain, a 2018 painting by US-born Cuban artist Hernan Bas. Hall 2.1, Stand K11.

KOW. This Berlin- and Madrid-based gallery is also presenting a Los Carpinteros show right now, and they’ve also held back a piece for Basel: Celosía Copta. Díptico, a delicate terracotta sculpture in two parts. Also on view, two videos by the art duo: Comodato and Retráctil (both 2018). Hall 2.1, Stand M1.

Galerie Lelong. The gallery has been closely identified with the work of Ana Mendieta and Zilia Sánchez, and both artists are represented at Basel—including a striking shaped canvas by Sánchez, from her series Topología. Hall 2.0, Stand D5.

Lisson Gallery. The fair’s Unlimited program, curated by Gianni Jetzer, is the space for massive sculpture and paintings, large-scale installations, video, and performance art. As part of this year’s Unlimited section, the gallery is premiering Carmen Herrera’s Angulo Rojo, the latest sculpture in her Estructuras (Structures) series. Hall 1.1, U29.

Neugerriemschneider. Jorge Pardo has been part of this gallery’s roster since its founding in 1994. His continuing explorations of art, architecture, and design are represented with a pair of figurative sculptures literally glowing with inner light, a hanging sculpture that doubles as a chandelier, and a colorful sculpture that could serve as a standing screen. Hall 2.1, Stand K8.

Galerie Luisa Strina. At the booth for this São Paulo–based gallery, look for Testigos: Paisaje I (2015), a delicate work on paper by Carlos Garaicoa. Hall 2.1, Stand L25.

Coates & Scarry at VOLTA. A special feature of the Volta fair is the dual-artist presentation, which sets the work of two artists in dialogue with each other. London-based Coates & Scarry is showcasing recent work by Armando Mariño alongside the work of French artist Emma Vidal.