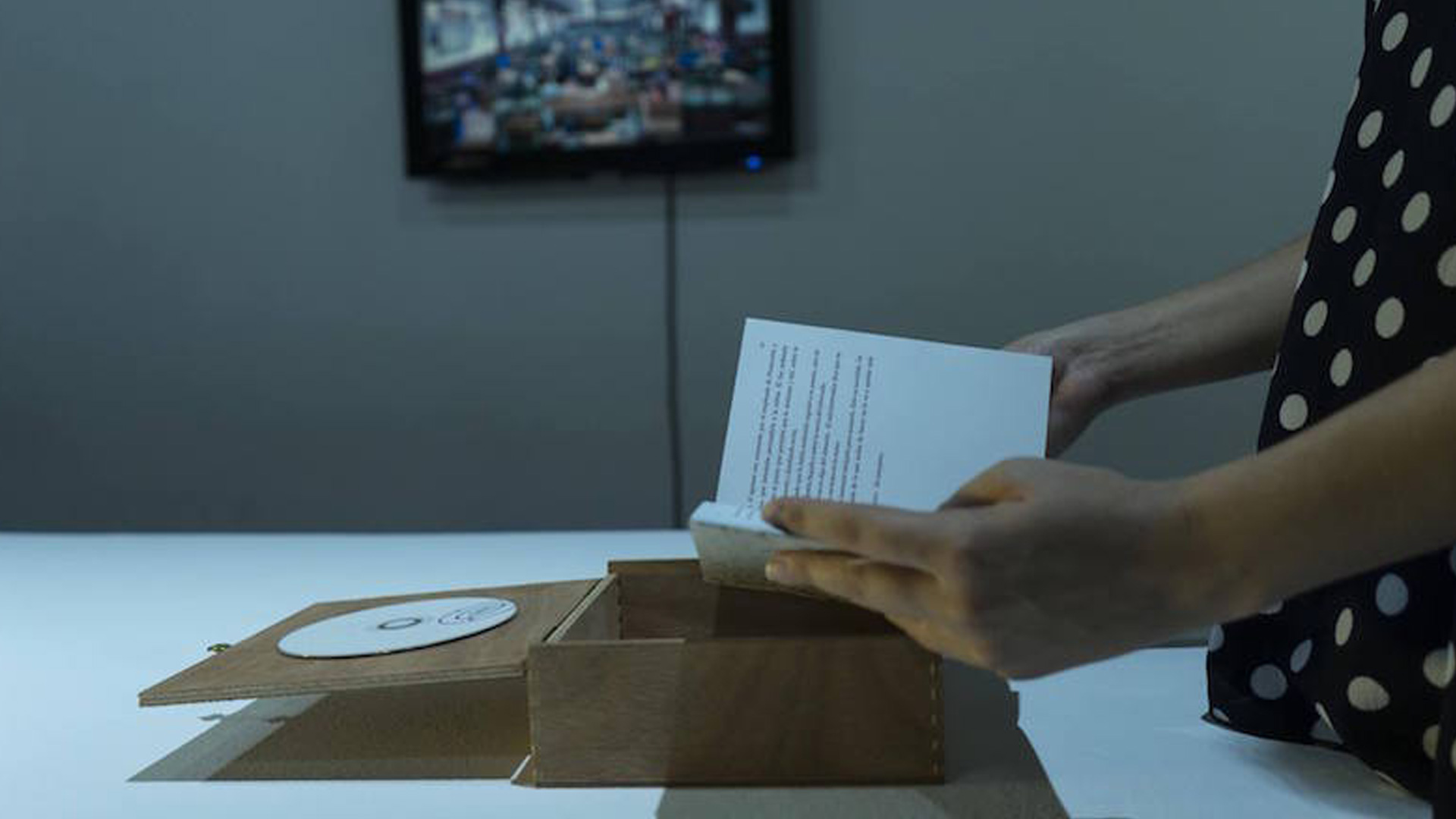 Since then, the Salon has kept up a steady pace of exhibitions, lectures, panel discussions, conversations, screenings, workshops, interventions, and other programs.

The theme of this Salon is Un ensayo de colaboración, An essay in collaboration.

With the Salon heading into its final weeks, we recap some of the highlights and look ahead to what’s still to come.

The Salon opened with an exhibition and reception at CDAV on Friday, October 27. (All events presented at CDAV unless otherwise noted.)

The first full week began with Despierto, a performance by William Ruiz on Tuesday, October 31. In early November, Yonlay Cabrera gave a talk on “Inconclusive Investigations into Sandú Darié,” about the influential 20th-century artist and member of Los 10 pintores concretos.

Cabrera then oversaw the opening of Diagramas, his own solo exhibition.

Other presentations also explored aspects of Cuban art history and their connections to Cuban art today. In mid-November José Manuel Fors spoke with artist and critic Julio Céssar Llópiz about Pintura fresca, the milestone 1978 group exhibition that Fors was part of.

Juan Delgado assembled a program on Detrás del muro (Behind the Wall), which has presented exhibitions with the 2012 and 2015 Havana Biennials. The topic of the Salon conversation: “Detrás del muro, Art, and Society.” In another presentation, Néstor Siré and Antonio M. Ramos Hernández spoke on “Aporías: ¿Limites de lo social?”

Among the projects opening in November were El arte de la escucha, described as a “collaborative work in progress.” The exhibition, wrote its creators, was based on “our inability as a society to listen to certain stories, and to leave them out of historical constructions.”

One part of the work—En la cocina de mi casa, 2005–2017, an installation by Henry Eric Hernández and Carmen Doncel (historian)—was presented at CDAV.

In Mediadores que marcan experiencias, Grethell Rasúa and Harold García created a participatory artwork and performance that was open to the public.

Participants were asked to attend a meeting the day before the performance, in which the artists explained what was needed: an object of great personal significance that would be pressed into the skin, hard enough to leave a mark.

In this video report from Cuba TV, Rasúa explains the project (in Spanish), with footage of the preparation, process, and exhibition.

In mid-December, Clandestina, which bills itself as “Cuba’s first clothing brand,” presented a talk on “Clandestina Corp: An exercise in futuristic marketing.” With its “Actually, I’m in Havana,” “99% Cuban design,” and other T-shirts, Clandestina has been covered by Vogue, the BBC, and other international publications.

The talk was followed by a hands-on screen-printing workshop, in which the phrase ‘Relajate y colabora” (Relax and collaborate) was printed on different surfaces.

And the Salon continues. Events this afternoon include a 3 p.m. presentation by Ariamna Contino and Alex Hernández on their project Aliento (Breath), and at 4 p.m., a presentation by artists Juan Pablo Estrada and Nelson Jalil on the catalogue of the Colección Invaluable, and their intervention/installation Invaluable.

On Thursday, January 18, Magaly Espinoza wraps up her weekly chat, Conversando sobre arte contemporáneo (Talking about contemporary art), at the Pabellón Cuba in Vedado. The Salon closes with an 8 p.m. concert on Saturday, January 20.

Here is a full schedule of the programming and events for the 7th Salon.