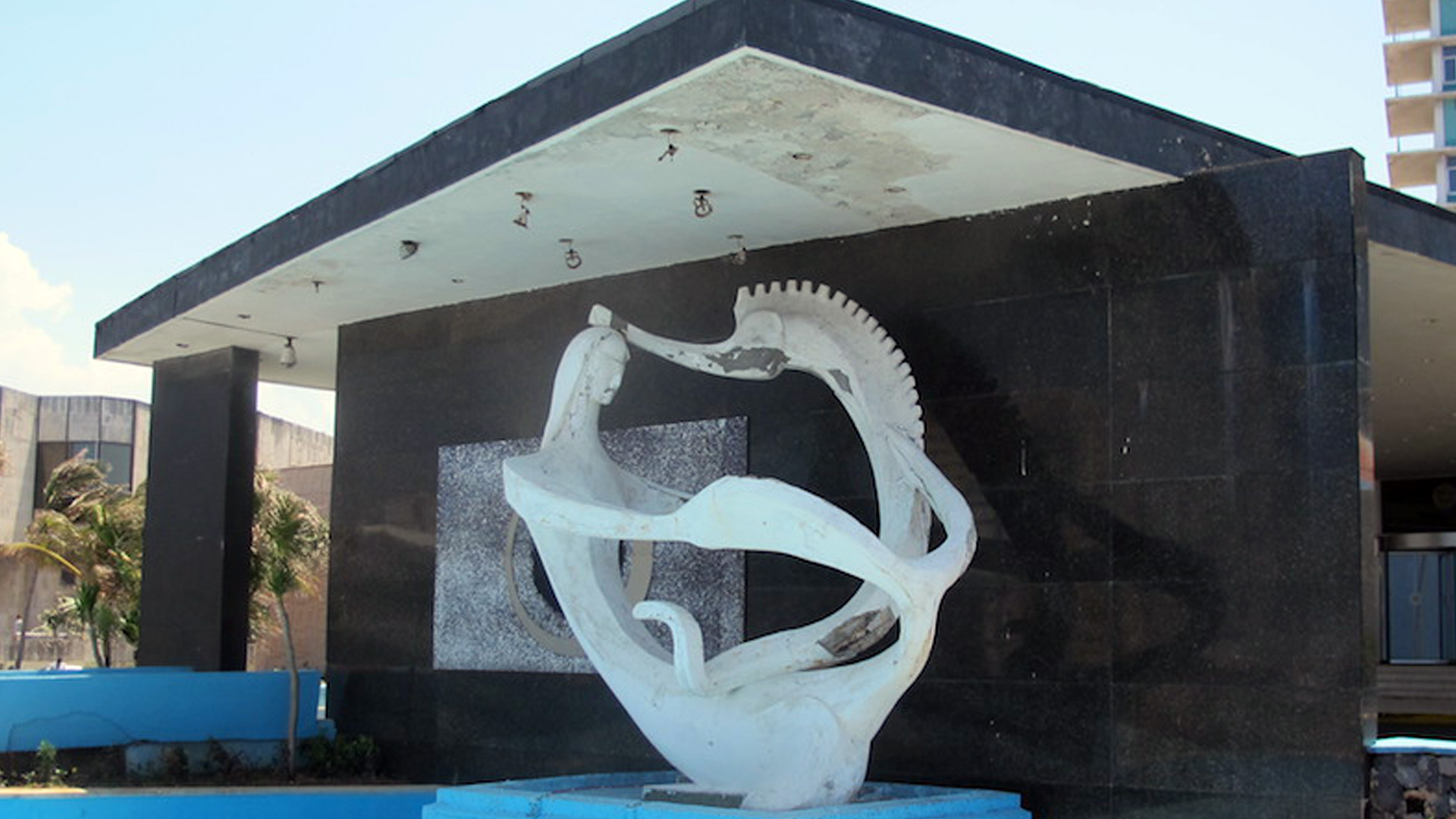 From baroque to midcentury modern to eclectico cubano, many of the island’s historic structures are embellished with decorative features and integral artworks. In an article adapted from the Getty Conservation Institute newsletter, Rosa Lowinger talks about steps being taken to preserve some of the most visible elements of Cuba’s architectural patrimony.

Barely the size of California, and with a population slightly greater than that of Los Angeles County, Cuba abounds in historic buildings and museum collections. This Caribbean nation has seven UNESCO World Heritage cultural sites and several hundred historic centers, cultural landscapes, and individual sites designated Monumento Nacional by Cuba’s Ministry of Culture. It also boasts both the oldest and the largest extant Spanish fortresses in the Americas and roughly one hundred fifty museums, many established to serve small communities.

But the principal architectural factor setting Cuba apart from most other countries in the Americas is that the vast majority of its building stock was constructed before 1960. While most are not grand enough to merit a Monumento Nacional designation, these structures testify to the island’s 500-year history—first as a Spanish colony, then as a 20th-century republic closely tied to the United States, and since 1959 as a Communist society whose government expropriated private property and presently owns all major buildings. Ranging from baroque, neoclassical, neo-Gothic, art nouveau, art deco, Italianate, streamline moderne, and midcentury modern to regional vernacular styles and an early 20th-century fusion style known as eclectico cubano, many of these historic structures are embellished with decorative features and integral artworks.

They are also in dire need of conservation.

The penchant for ornamental finishes and art within architecture was as common in the countryside as in the capital. Eighteenth- and 19th-century sugar barons and landed gentry regularly contracted local artists and Italian muralists to adorn their homes, churches, and theaters. Pairing art with architecture proliferated during the building boom associated with the 1863 removal of Havana’s city wall, peaking in the decades following the 1902 establishment of the Cuban Republic.

The grand hotels, cigar factories, theaters, casinos, social clubs, and government buildings of the era contain important artworks, including decorations by the Tiffany Studios in the Presidential Palace (1920) and by René Lalique in the Vedado mansion (1927) and mausoleum (1933) built by sugar magnate Juan Pedro Baró.

By the 1950s, artworks by avant-garde masters Wifredo Lam, Amelia Peláez, René Portocarrero, Mariano Rodríguez, Rolando López Dirube, Rita Longa, and Florencio Gelabert, among others, were de rigueur in public buildings and residences. Indeed, some of Cuba’s best murals are located in apartment building lobbies of the period.

The first two laws of the 1976 Cuban Constitution—the Law on Protection of the Cultural Heritage (Law No. 1) and the Law on National and Local Monuments (Law No. 2, 1977)—established a National Register of Cultural Property and National Monuments Commission as departments of the Ministry of Culture and defined categories for protection. Most important, the laws mandated that the restoration of art in a designated site needed the National Monuments Commission’s approval.

With seed money from UNESCO, and located in a 17th-century convent in Old Havana, CENCREM was Cuba’s first national institution expressly created to train conservators, undertaking major projects with a scientific approach. [. . .] In 1997 the college-level Superior Art Institute [ISA] began granting undergraduate and master’s degrees in conservation in concert with CENCREM.

Although CENCREM closed in 2012, largely because of deterioration of the convent where it was located, the degree program remains.

In the mid-1990s, the Office of the Historian of Havana came under the direction of historian Eusebio Leal Spengler, who devised—and was allowed to implement—a unique model for preservation and conservation that reinvested revenue from hotels and restaurants located within the World Heritage Site into conservation projects.

In 2007–8 Colegio Universitario San Geronimo, a preservation and heritage management college, was established in a restored building within the historic district. The building also houses the Historian of Havana’s studios for conserving works on paper, books, clocks, sculpture, and metals, as well as a scientific laboratory.

Yet despite these efforts, conservation is arduous in a country of such limited economic resources. When economic strictures are coupled with the limitations on materials imposed by the US embargo and the bureaucratic roadblocks created by top-down control of projects, the fact that anything has been adequately conserved is a minor miracle.

And therein lies the conundrum of Cuban preservation efforts. It’s a good thing to have strict laws protecting heritage, but if there is no project funding, and if access to materials is restricted, conservation is hobbled.

Deferred maintenance constitutes the single biggest challenge, especially for early 20th-century reinforced concrete buildings devastated by the effects of saline air and high humidity. Partial and full building collapses are not uncommon, especially when torrential summer rains saturate surfaces that then crack as they bake in the tropical sun. Indeed, the country is known not only for the quality of its architecture but for its state of decay.

However, Cuba’s changing economy and foreign investment are beginning to alter that.

Today, Havana is a city of cranes. They tower around the historic district, snarling traffic, and the sound of jackhammers permeates the city. Cuba is racing to restore its historic-building stock, a drive fueled primarily by the need for hotel rooms. . . . There are approximately twenty new hotel projects in the capital alone and many others around the country, most involving renovation of high-value historic buildings.

The opening of borders is bringing opportunity to individuals, and even non–property owners are beginning to benefit. For historic buildings, however, this is potentially dangerous. There is little or no control over intervention on structures not nationally registered or outside World Heritage districts, and even though the National Council of Cultural Heritage and the National Monuments Commission retain authority over high-value sites, investors, hotel developers, and the government’s tourist ministry press for work to be done quickly.

Moreover, new laws allowing limited private enterprise have led to the creation of restoration and construction “brigades” staffed by artists, often in conjunction with graduates of the Escuela Taller. These enterprises can sell their services as “restorers of architecture” not only to the private sector but also for work on high-value buildings, often without trained conservators providing oversight. As a result, some damaging methodologies are employed on historic finishes and integral artworks.

This peril is not lost on Cuba’s preservation professionals. Gladys Collazo Usallán, president of the National Council of Cultural Heritage and the National Monuments Commission, says her greatest concern is maintaining preservation values at a time when so much urgent work needs to be done. The council regularly convenes panels of experts to vet projects in the highest-value buildings. They strongly advocate for the inclusion of conservation professionals in all projects and for conducting thorough analysis prior to intervention.

But the pressure is daunting, especially for architectural artworks. To combat this, the council is trying to encourage best practices. A significant project under way is a nationwide inventory of murals and decorative finishes in historic buildings. Directed by Eliza Serrano, a venerated scholar and practitioner who founded the murals department at CENCREM and now teaches at ISA, this ambitious undertaking aims to catalog “everything that is a decorative surface that is part of the spatial atmosphere of a building.”

It is a formidable task, but the council hopes this data will also help train regional historic-sector workers in identifying and understanding what constitutes a historic decorative surface.

Serrano eloquently states, “We can’t separate the material from the space because the space is its material. This needs to be understood through observation and discussion of the philosophical essence of the work—how it fits into the building, what its role is in the cultural expression. We are under enormous economic pressure, but if we create an army of cultural defense, we can protect our patrimony.”

“In Defense of Decorative Finishes: Cuban Architectural Conservation in the Twenty-First Century” was originally published in Conservation Perspectives, the GCI Newsletter 32: 2 (Fall). Online. Authored by Lowinger, Rosa, 2017. © 2017 The J. Paul Getty Trust. All rights reserved. Our thanks to the Getty Conservation Institute for permission to reprint this version of the article.