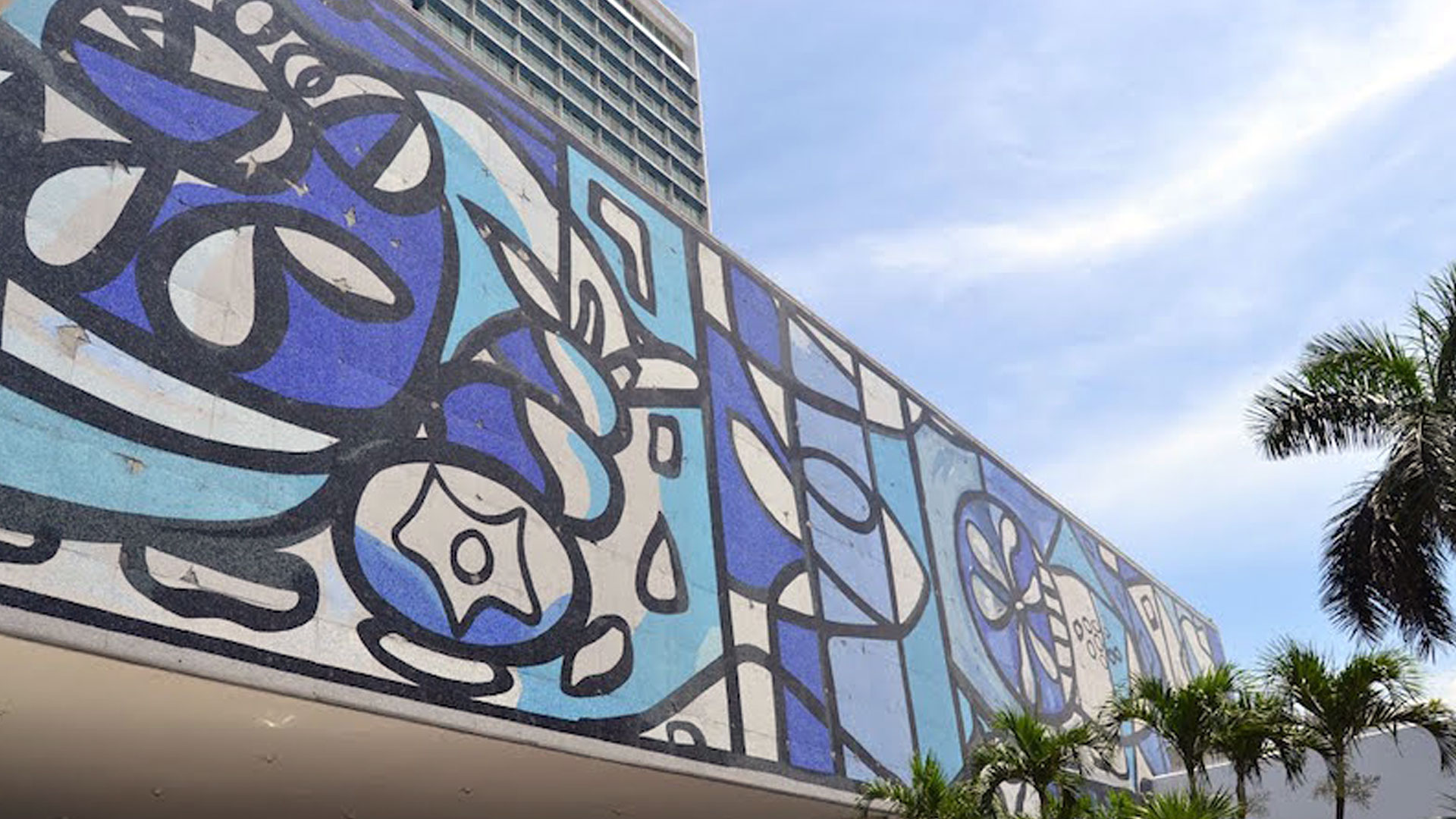 I met Rosa Lowinger at Art Basel Miami in 2015. She was introduced to me as a fine art and architectural restorer who also hosts frequent cultural exchange tours to Havana. I asked about her favorite site in all Havana (Los Jardines de la Tropical), and she asked me the same question. I confessed that, with all the beautiful choices, mine was the Tropicana nightclub. She laughed and said, “Oh I see you read the book.”

Fate had stepped in, putting Rosa on my radar.

Author, historian, architectural restorer, art restorer. Here’s what happened when we sat down to chat.

“A Place of Exquisite Ruins.” A Land That Time Forgot.” These are things one often hears from first-time visitors to Cuba. What do you say to this?

Well… Time hasn’t forgotten Cuba. Cuba has been evolving in real time. Deterioration is evolution.  It’s not something that is frozen with time, or that time forgets.

What happened is that Americans have not seen it in more than half a century.

I get it that people see exquisite ruins, but I struggle with that comparison because, though Havana is exquisite even in its ruined state, for the people who live there it’s not so exquisite.

That said, I remember my first trip to Cuba.

I too was struck by the amount of deterioration, but I also thought, “These buildings! They’re still standing. Everywhere else in the world, they’d be torn down by now and given over to developers.”

These may be ruins, but they don’t exist quite this way anywhere else in the world.

Can they be repaired? Restored?

Absolutely! Deterioration and repair go together.

There’s a lot of restoration going on in Cuba right now. I’ve seen a lot of it over the years. The first initiative began in the early 1990s, after the fall of the Soviet Union, and it is now in hyperdrive.

Hyperdrive can be dangerous to what’s great about those buildings. They have unique decorative finishes. When people rush to restore, they overlook those details—the marble, the terracotta, the tile, the stairwells, the banisters, the railings the murals, the stained glass. Those surfaces require a “delicate intervention.”

Delicate intervention, yes. Remember when the Sistine Chapel at the Vatican was being restored, and people were divided about the authenticity of its colors? It was the “Too bright” thinkers versus the “No, that’s the way it originally looked” thinkers.

The Sistine Chapel was a little different. It was basically covered in dirt and grime, and when you clean those layers of grime, the colors pop. The same thing happens in Havana in places. If you clean the mineral deposits from the surfaces of glazed tile, the colors pop.

But many things are much more subtle. Stone is subtle. Marble is subtle. One of the things that worries me is over-cleaning. Certain restoration projects in Cuba in recent years have resorted to methods of over-cleaning, leaving things too white, too bright. And often that’s achieved by removing the surface patina, which you can never get back.

What restorations in particular do you consider to be successful?

Without question, the most successful restoration project in Cuba is the whole compendium of the historic section in La Habana Vieja—Old Havana. It’s not so complicated, because Colonial buildings are mostly made from similar materials: stone, tile, painted wood, and tend to be more homogeneous in terms of those materials.

The restoration of La Habana Vieja was spearheaded by a historian, Eusebio Leal [Historian of the City of Havana].  It is a big-picture idea, a vision of the whole. The key is not turning the city into a museum. Places are slowly being made habitable, and people are not chased out of buildings. A lot of work has been directed toward the children and the elderly of Old Havana, and the monies that are earned from tourism are funneled back into restoration.

This is what makes a successful restoration. This is what happened in the city of Trinidad. Their historic restoration has been the economic drive to their success.

What would you like to see chosen next for restoration?

For me to work on or for a Cuban project?

Let me answer that a little differently.

Right now, they [the Cuban government] are choosing what’s most important to them, and that means something that can be converted into income—hotels, restaurants, and certain palaces that were made for that reason. I’d like to see that work done well, without losing sight of the preservation principles that have driven so much work so far.

But specifically… I love Los Jardines de la Tropical, the Tropical Beer Gardens, and I would love to see that done. It, too, is a place for the Cuban people.

It’s a series of fanciful concrete structures, buildings, and pavilions, made in the 20th century. It needs work—but very subtle work, because if you get someone in there with just some buckets of cement, it’ll be a disaster.

I also love the Amelia Peláez mosaic on the façade of the old Havana Hilton building [currently the Hotel Habana Libre; see image earlier in story]. The mosaic has already been restored once, but it’s in bad shape again because it has problems that are just not well understood. Now the Patrimonio [Dirección de Patrimonio Cultural] is working on it, and I think it would be magnificent to see it thoughtfully conserved and restored.

Can you say something about Cuban modernist architecture?

The thing about modernism in Cuba is, in and around the mid 1940s, the Cuban intellectuals—the artists, the writers, the composers, the architects—were grappling with what it means to be Cuban, and how to express that idea artistically. The architects and others latched onto modernism as a way of throwing off the freighted, Spanish Colonial past, and looking to something that was brash, and young, free of convention and hyper-sexy. They learned and borrowed from everywhere—Brazilian Modern, Le Corbusier—and then they made it Cuban.

I feel the best of Cuba is expressed in those buildings. Walking the neighborhoods of Havana, sometimes the modern homes and buildings are the hardest to see for their beauty. When you must paint a spare minimalist building electric blue because that’s the only color at hand, it does lose something. But there is so much style there, and they are amazing buildings to this day.

Okay, let’s get to it: Temple of modern glamour and the subject of your book, Tropicana Nights, the Tropicana nightclub. For me, it was love at first sight. I saw it as a tourist at night, and even in its compromised condition, it was impossibly glamorous. It was a bit like the swanky nightclubs of LA, New York, or Miami.

Except that what you saw in Miami and Los Angeles was actually Cuban first, and that is exactly what drew me to Tropicana.

You know, as a young Cuban American growing up in Miami, the nostalgia component of one’s parents pining for the past was kind of overbearing. Here I was, in the 1960s and 1970s, quite young, American, just wanting to be myself. I thought, “Enough of this pining for the old country.”

Fast forward: I visited Tropicana for the first time as an adult, and already an architectural conservator. I saw those buildings in their decay and said, “Wait a minute! What is this?” Most people do see it at night, in all its magical beauty, and no one ever sees the prized, internationally renowned, modern architecture.

Tropicana Nights is a brilliantly researched, entertaining book about the Tropicana as told by the owner Martin Fox’s widow, Ofelia Fox. It is also a metaphor for the history of Cuba in certain time and place, a world of glamour, glitz, and talent juxtaposed with stories of life in Cuba.

As I read it, I found it very visual, and I also myself casting a movie (or a show). What a visual treat that would be.

Thank you for saying that. It’s great timing to be able to talk a bit about the “visual treat.”

There are a lot of things in play right now. I’m having fun talking to people about how best to do that.

People are interviewing me [about a possible visual production], but although they may not know it, I am interviewing them too.

Tropicana Nights cannot be just another sloppy mafia tale about gangsters and corruption—one that paints Cuba of the 1940s and 1950s as only a place where people got what was coming to them. Many books have done that.

Those books are hardly ever written by Cubans. It’s a foreigner’s vision of our country.

Tropicana was a nightclub, a place where you could sit, dine, and drink, see a show, and watch the world unfold before you.

Are you still involved in the restoration of the Miami Marine Stadium? Another fabulous modernist creation in ruin, this one in Miami.

Yes. And you know, I consider that a Cuban building, too. It was designed by Hilario Candela, a Cuban, who trained in the United States and interned with Max Borges Recio, who designed the Tropicana.

So, for me, this is a great fit. It is a reinforced-concrete building, a third of it sitting in the water, located on a wide expanse of Biscayne Bay. We’re working with the design team doing the development for the restoration, specifically on cleaning and repair methods.

What other projects are you working on?

There’s also a wild project at Houston Methodist Hospital. We’re removing a 96’ x 17’ mosaic from above the outside wall of the emergency room and relocating it.

We’re also working on the gold mosaic façade on the historic May Company building in Los Angeles, and public art collections in Santa Monica, LA, Fort Worth and Beverly Hills.

We recently received an award for our work at the Seventh Regiment Armory in New York City, restoring a Tiffany mantel.

Is there a dream project in the making?

Yes. Something is germinating in my mind, and has been for a few years. It will be a novel—a story that uses my profession in some profound way.

The thing about conservation and restoration is that it is sometimes very poignant. Layers of living are revealed and wiped clean. As human beings, we don’t want to lose things, to let go of things we live with and remember and love. I also want it to be love story; this I learned from my husband. Everything is better when seen through the lens of love.

Here is your chance to say anything you want to. What would you like to tell the world?

Don’t tear down historic buildings. Don’t be foolish or reckless about that. Try to save them, because history is conveyed in brick and mortar.

When you can see the evidence of history, you are more conscious of the present. Havana’s magnificence is that you can walk from one end to the other and witness its history like a pop-up book. You can start in the mid-15th century and walk your way to the present.

The only way to do that is to hold onto your historic buildings.

Amen. And thank you, Rosa.