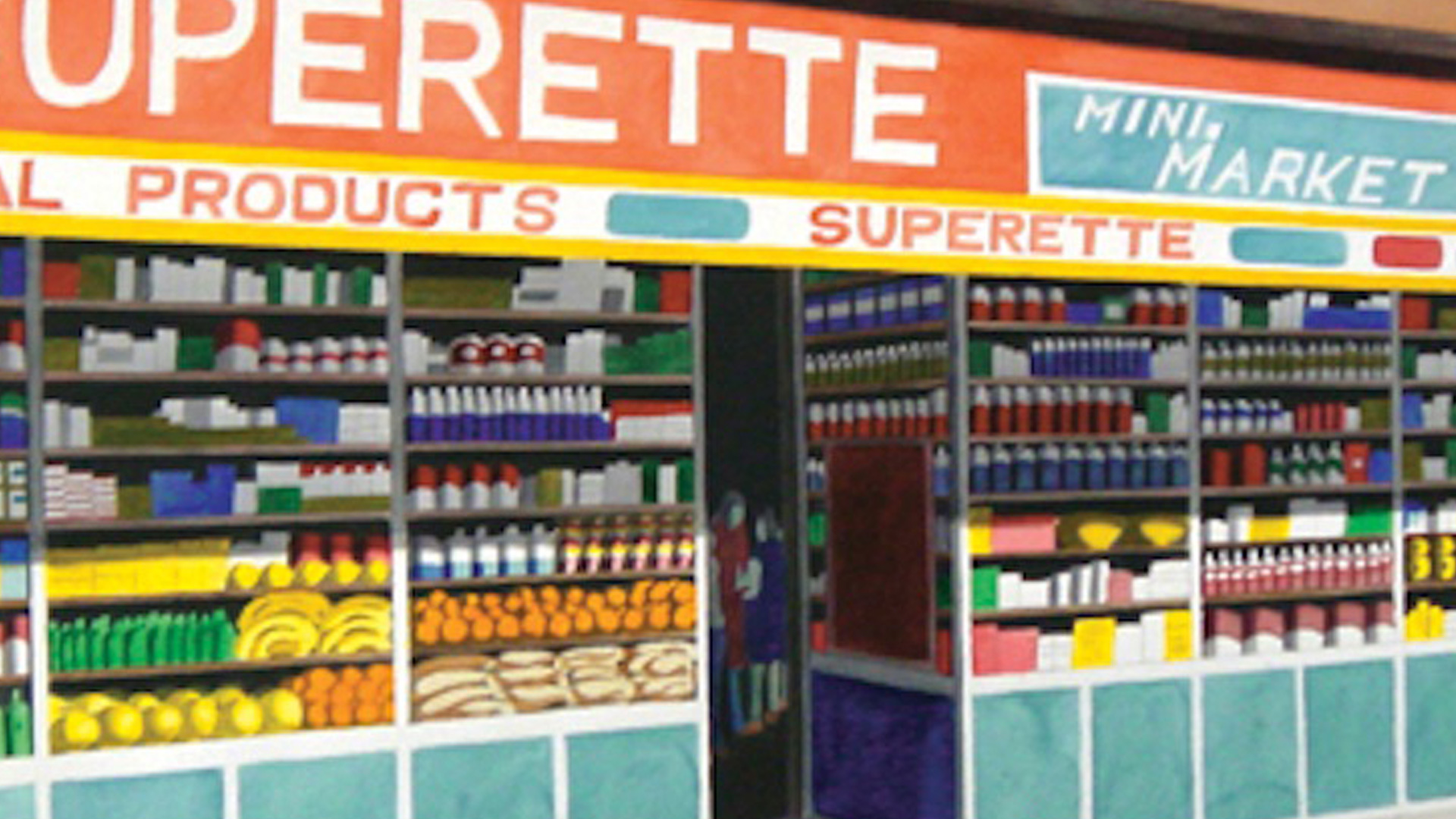 The show, opening Thursday, February 9, at the Lowe Art Museum, University of Miami, is the artist’s first in South Florida in over a decade. Co-curator and architecture scholar Victor Deupi talked with Susan Delson about the exhibition, Sanchez’s career, and the role of architecture in his art.

Tell us a bit about the show. How did it come about?

I have always been interested in architectural representation, and in particular how artists, rather than architects, viewed the built environment. It is an enormous topic, and I am surprised by how little this is discussed in architecture schools.

In any event, while doing some research a few years ago at The Metropolitan Museum of Art in New York, I stumbled across a collection of some 250 un-catalogued travel drawings, watercolors, and lithographs of Cuba and the Caribbean by Emilio Sanchez (1921–1999). He donated this collection to the museum in 1965, and the works remained for the most part undisturbed until I “rediscovered” them in 2013.

Thinking at first that Emilio Sanchez was a 19th-century travel artist (I was not familiar with his work at the time), I was stunned to see that the works dated from the 1940s and ’50s. I was instantly hooked, as few mid-century artists were doing that sort of thing, and the project started to take shape.

How large is the show, and how is it organized?

The exhibition brings together nearly three dozen examples of this under-appreciated artist’s remarkable oeuvre, works that have never before been shown together. Additionally, we are exhibiting personal documents, letters, sketchbooks, doodles, and other ephemera to give a sense of who Sanchez was—in the round, as it were.

Collectively they represent nearly six decades of Sanchez’s professional career and shed new light on this enormously prolific Cuban-American artist, whose work was last highlighted in a monographic show in Miami more than a decade ago.

Emilio Sanchez in South Florida Collections is a testament to the artist’s creative spirit, his mastery of a range of media, and the impact of his extensive travels throughout North and South America and the Caribbean region. The exhibition allows viewers to follow his development from the 1940s to the 1990s by losing themselves in his dreamlike land- and cityscapes, peering through his Cuban-inspired stained-glass doors and windows, and marveling at the fantastical and monumental structures that fill the Lowe’s galleries.

To do so is to begin to understand the complex vision of a 20th-century Cuban-American artist who perhaps stood apart from mainstream modernism in both his native and adoptive countries, but whose life and career are inextricably linked to his journeys throughout, and within, the U.S. and the Caribbean.

Did Sanchez ever live in South Florida himself?

Emilio Sanchez lived primarily in New York and Cuba. He never lived in Miami, though he often visited family and friends here. He was represented by several galleries in Miami over the years, and he had several exhibitions throughout South Florida. He also donated his works to several institutions. After his death, the Emilio Sanchez Foundation continued to place his drawings, paintings and sketches in important collections.

Therefore, the main idea of the exhibition is simply to draw on examples from South Florida collections that cover his entire life and every medium in which he worked. Having said that, the casitas are extremely popular and we will have several on view.

That brings up an interesting point. In terms of architecture, what sort of structures did he like to depict?

Sanchez rarely depicted the famous or more obvious buildings in Cuba or elsewhere. He preferred rustic buildings, dilapidated structures, cluttered interiors, or busy urban fabric. His sketchbooks are filled with architectural details or preliminary studies of colors and shadows.

His houses tended to be inspired from existing structures – his personal photographic collection is vast and you can sometimes find the precise building he was drawing – but the finished work would be significantly different from the original, transported to another world.

His keen eye and remarkable ability to edit out incidental elements and details imbue the work with a dreamlike quality, as if the buildings he depicted existed in a parallel universe born of memory, longing, and imagination.

As an architectural scholar, what drew you to Sanchez’s art?

His approach was largely intuitive; by avoiding the mechanical precision and rigidity of linear perspective, he adopted a loosely empirical approach that resembled the architecture and natural forms he so admired in Cuba. His architectural paintings, in particular, might even be said to incorporate a sense of “imagined realism,” given that Sanchez often combined playful or fanciful elements with his depictions of actual structures or streetscapes.

How did New York figure in his art?

Sanchez spent the latter half of his career creating architectural views of New York City, endless vistas of sunrises over the East River, and sunsets across the Hudson River. The early influences of his teachers at the Art Students League, particularly Reginald Marsh, can also be seen in Sanchez’s interest in harlequins, cabaret scenes, and New York society ladies, which fascinated him as much as urban cityscapes.

One of the few Cuban-born artists to live and work primarily in New York City in the mid-20th century, Sanchez was a modern travel artist, a 20th-century flâneur of the world around him.

Let’s focus on a few specific works. Maybe you could select three and then tell us about them.

Let’s start with El Chalecito (early 1950s). This vernacular scene depicts a thatched-roof hut (bohio) with campesinos tending their garden or relaxing on the porch. The drawing was featured in Sanchez’s first solo exhibition in Cuba—a show that opened in March 1956 at the Lyceum in Havana. Interestingly, Sanchez’s stepfather, the Peruvian painter Felipe Cossío del Pomar, curated the exhibition.

Next, Beach house on island in Cienfuegos Harbor in Cuba (circa 1950). Viewed frontally, this composition moves away from Sanchez’s more perspectivally accurate works from the early 1950s. The striped roof of the house recalls the iconography of a circus tent, and the seven arched bays ostensibly reference the porch on Sanchez’s family home in Senado. This painting was presumably the first oil painting completed in Cuba and, according to the artist, was meant to represent a beach house on an island in Cienfuegos Harbor.

Last, El Ventanal (1971/73). Here, Sanchez provides an unconventional composition, abandoning his full-view paintings of buildings for a closely cropped detail of a colonial window with wooden screen. These architectural details are typical of those found on houses throughout Trinidad and other colonial towns in Cuba.

Working with my co-curator Nathan Timpano has been a great pleasure and experience, as I am admittedly an architect and architectural historian. Nathan’s expertise in 20th-century Latin American art allowed me to understand Sanchez in a much broader context. He could point to things that I could not see, and in fact, much of what has been discussed here is as much his as it is mine.

Finally, curating an exhibition with my wife, Jill Deupi (Beaux Arts Director and Chief Curator of the University of Miami’s Lowe Art Museum), has been a great personal joy and professional satisfaction. She jokingly tells everyone that for the last few years we have had a ménage à trois with Emilio Sanchez! Our children even talk about him as if they knew him well.

Emilio Sanchez in South Florida Collections opens this Thursday, February 9, at the Lowe Art Museum, University of Miami, where it runs through May 21.