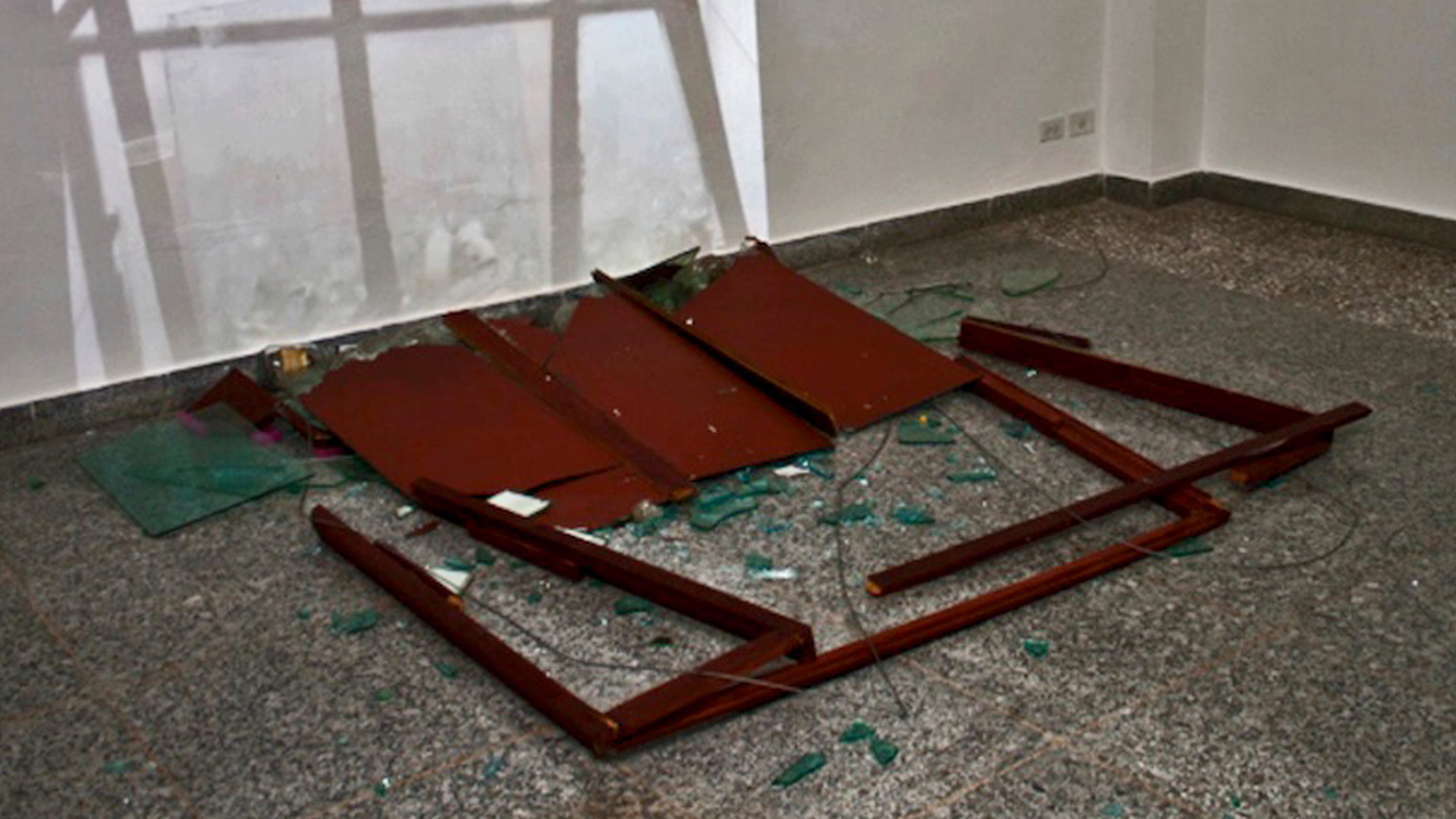 Osvaldo González, too. At Galería Servando, Autofagia presents a group of eight oil paintings by this emerging artist. Taking domestic space as their setting, the canvases abstract, fragment, and reconstruct a dreamlike reality. On view through June 17.

And Lester Álvarez Meno. At El Apartamento, Estado de silencio, the silence of the title is the type that comes after a tremendous crash—as implied by La vitrine que cae (The Cabinet That Falls Down), 2016, an installation that depicts the aftermath of just such an event. Other works on view include La Maleza (Wasted Library), 2015–2016, an editioned series of 39 books bearing such titles as La Historia del horizonte and Cuentos del insilio (Tales of Insile). On view through June 18.

And Cool War at the Lam Center. Game-art creators from the island and the United States join together in Cool War: Game art across the straits (Game art a ambos lados de los estrechos). Emerging in the context of normalizing international relations, Cool War recalls the military technologies and black-and-white thinking that shaped early video games, while exploring the potential for more playful, open forms in video art.

Participating artists from the island include Rewell Altunaga and Rodolfo Peraza, who curated the show with Claudia Taboada and Rachel Price (author of the book Planet/Cuba); US artists include game-art star Cory Arcangel and Matteo Bittanti & Colleen Flaherty (COLL.EO). On view through June 30 at the Wifredo Lam Center of Contemporary Art.

A Double Bill in Miami. Two artists with vastly different styles but a shared commitment to painting are partnered in a pair of shows at Mindy Solomon Gallery. Geandy Pavón: Political Fold presents recent work based on archival photographs as source material. “The subject portrayed in each photograph”—often classic icons of government, power, and money—“allows me to travel from one genre to another, such as landscapes or portraits, but always conceived from the perspective of a still life painter,” Pavón said in a gallery statement.

José Manuel Mesías: About the Absolute Truth uses paintings of everyday life to reflect both his own inner monologue and Cuban society. “My work exudes the beauty and deterioration of the urban setting,” he said in a statement, “as it transmits the anxiety and marvel that the world, in equal parts, provokes.” Both exhibitions run through August 13.

Saturday in Miami: Outsiders. At Pan American Art Projects, Felipe Consalvo, Isabel de las Mercedes, Samuel Feijoo, and Ruperto Jay Matamoros are among the 14 artists featured in this show of outsider art from the Caribbean, Honduras, and Florida. Religion, daily life, and the fantastic are among the themes explored in the works on view. The opening reception runs 4–6 p.m. this Saturday, June 11, and the show runs through July 23.

Tonight in NYC: Somos in Chelsea. In recent years, acclaimed documentary filmmaker and cinematographer Roberto Chile has turned his attention toward photography. The results are on view at Cuban Art Space in Chelsea, where Somos: Photographs by Roberto Chile opens tonight with a reception 6–9 p.m. The artist is expected to be on hand for the opening. The show runs through July 10.

Cuba at Art Hamptons. Thanks to Galería Habana, Cuban art will be a presence at this fair in Bridgehampton, which helps kick off the summer art season in the Hamptons. Galería Habana is presenting Artchipelago (Because every artist is an Island), an exhibition featuring the work of a dozen artists, including Roberto Fabelo, Carlos Garaicoa, Ariamna Contino, Adonis Flores, and Glenda León, among others. The show will be open during the run of the fair, June 23–26.

In addition, a panel discussion on “Cuban Art Today” will take place on Saturday, June 25. Presented in conjunction with the exhibition, the discussion will include Carole Rosenberg of the American Friends of the Ludwig Foundation; Luis Miret of Galería Habana; and artist, critic and curator Tonel (Antonio Eligio Fernández). 3:30 p.m. in the fair’s VIP Lounge.

Tonight in Washington, DC: (Art)xiomas. Curated by Gabriela García Azcuy, this group show includes work by a dozen young and emerging Cuban artists, including Ariamna Contino, Jorge Otero, Adislen Reyes, Adrián Fernández, Alex Hernández, and Frank Mujica. The exhibition debuted last November at the Centro Cultural Español in Miami; now, it’s coming to the Art Museum of the Americas, where it commemorates the centennial of the museum’s founding director, José Gómez Sicre—the curator who brought MoMA director Alfred Barr to Cuba in the 1940s and was an organizer of the landmark 1944 exhibition, Modern Cuban Painters. (Art)xiomas, Cuba Ahora: The Next Generation runs through August 7. Tonight’s reception runs 6–8 p.m. Admission is free but you must pre-register here.

José Rosabal receives Bugatti-Segantini Career Prize. This Saturday, June 11, the veteran abstract artist José Rosabal—one of two surviving members of the 10 Pintores Concretos group of the 1950s and early 1960s—will receive the 57th Premio internazionale Bugatti-Segantini. Acknowledging Rosabal for his accomplished career, and for his longstanding commitment and dedication to Concrete art, the ceremony marks the first time that the award has been given to a non-Italian. An exhibition by Rosabal will open that evening at a 6 p.m. reception at the Villa Brivio in the town of Nova Milanese.

Honorary doctorate for Bruguera. Tania Bruguera was the commencement speaker for the 2016 graduating class of her alma mater, the School of the Art Institute of Chicago. She was also among those receiving an honorary doctorate from the school, where she has been part of the distinguished alumni lecture series. With members of the group Mujeres en movimiento, Bruguera will lead a series of New York City walks in July as part of the Elastic Cities project. More info here.