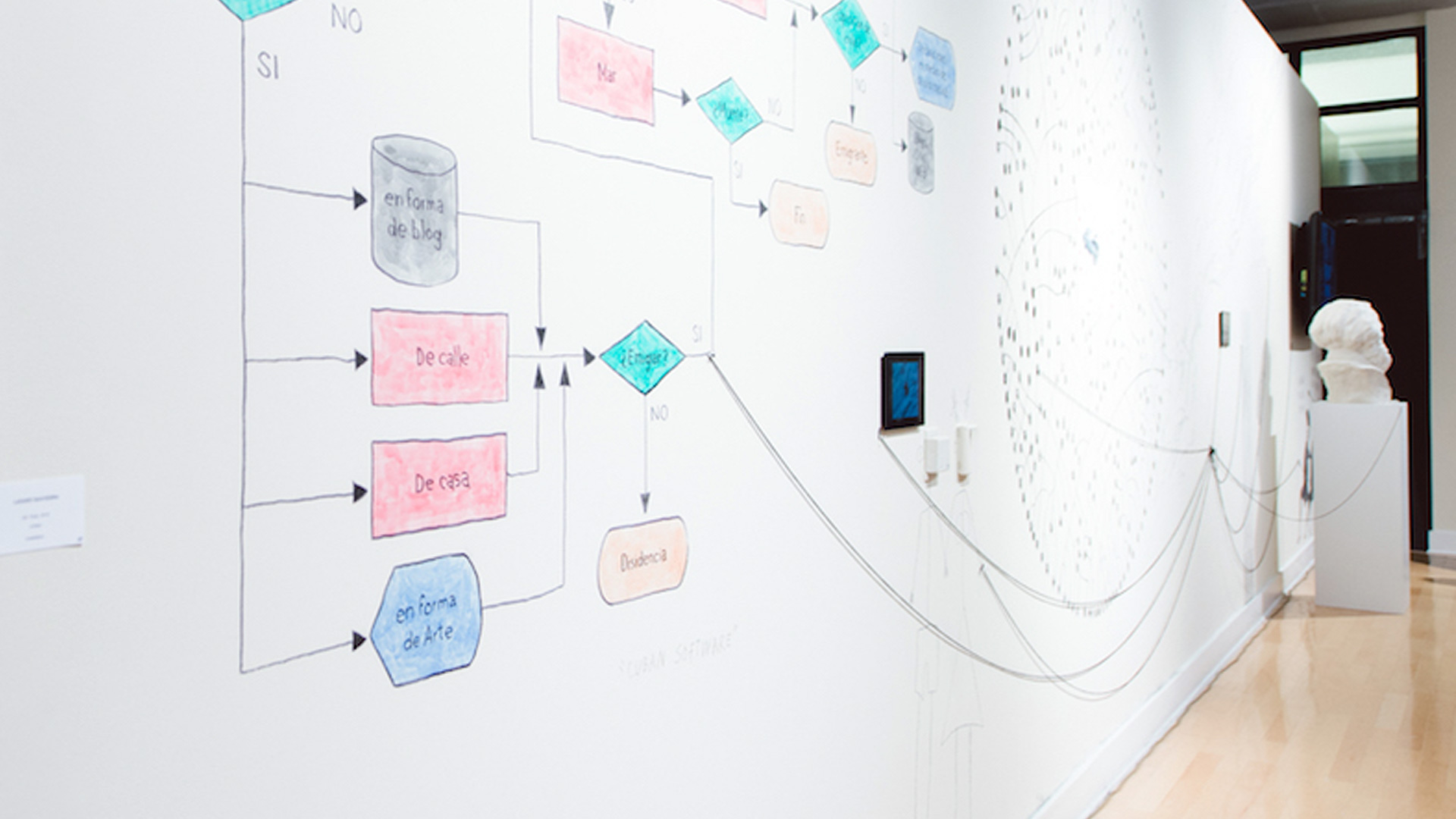 Under the suggestive title Growing Up In Neverland, the Scarfone/Hartley Gallery of the University of Tampa recently presented a group show of  eight Cuban artists (Ernesto Leal, Pedro Pablo Oliva, Sandra Ramos, Lázaro Saavedra, Esterio Segura, Javier Castro, José A. Vincench, and The-Merger collective). The exhibition, curated by David Horta, had the aim of promoting cultural dialogue between the island and the United States. The works in the show, made in the last ten years, address life in Cuba: daily routines, the Cuban identity conflict, the function of art, political contingencies, and migration.

The exhibition’s title—itself borrowed—emphasizes the intertextual character of many of those pieces, as well as the sui generis status of an island both near and at the same time arcane, given the very particular conditions of the Cuban reality. On another level, Growing Up In Neverland points to the prevailing playfulness in the show—an echo of Peter Pan author J.M. Barrie’s stubborn desire to never leave childhood—while being acknowledging adulthood’s eventual arrival and all that it implies.

The theme of migration is addressed by works by Pedro Pablo Oliva, Sandra Ramos, Esterio Segura and The­-Merger.

For its part, Goodbye My Love (2012) by Esterio Segura (Santiago de Cuba, 1970)  is a detail from a public art installation shown at the Jose Martí International Airport during the 11th Havana Biennial, and in a pedestrian corridor just off Times Square in 2013. Goodbye My Love incorporates the kitsch that is so vital to Segura´s work and Pop art, as essential resources that sustain the bittersweet moment of separation.

90 Miles (2011) by Sandra Ramos (Havana, 1969) recreates a fictional bridge that seeks to unite the two ends of the Straits of Florida. The artist starts with aerial photographs taken during flights between Miami and Havana, which are integrated into light boxes that the public can walk on.

90 Miles was shown for the first time in Sandra Ramos: Living at the Vortex at the Dot Fiftyone gallery in Miami, and a year later was part of her personal exhibition Puentes: entre lejanías y cercanías llevadas a cabo held at the Museo Nacional de Bellas Artes in conjunction with the 11th Havana Biennial. A version of this Puentes series, 50 Millas. Italia- Costa – Báltica was included in the Cuban Pavilion at the Venice Biennale 2013.

Lázaro Saavedra´s Cuban Software (2012), first presented in the solo exhibition No concept at Galería Habana in 2013, appropriates the syntax of computer programming language to expose the different trade-offs and/or alternatives that emerge from an initial problem: “Breaking away from the common doctrine, belief or conduct.” Binary strings (1 and 0—here translated as Yes or No) are derived from each of the possible alternatives, drawing from the initial statement an incisive panorama that portrays, not without irony, the setbacks Cubans face when it comes to ideology.

The show included two paintings from José Ángel Vincench’s 2015 series Pintura de Acción (Action Painting). This series reflects the logical evolution of the artist´s interest in abstraction, silence, and the interstices of the two in art and Cuban political life. The “dripping” of these paintings is a testimony of the acts or the “action” of vandalism that the homes of those who openly oppose the Cuban political system are subjected to. In fact, the artist starts from documentary photographs often included as a reference, which are carefully reproduced through the traditional technique of gold leaf—effectively seeking to legitimize the voices of dissent within Cuban contemporary society.

Vincench’s series El peso de las palabras (2015) addresses the prejudices that are latent within Cuban idiosyncrasies. Vincench takes words from popular slang that are used to stigmatize and segregate: in this case, Disidente, Cherna, or Pasa (referring, respectively, to the political otherness, homosexuality, or blacks).

Also drawing on popular culture, Javier Castro Rivera (Havana, 1984) uses video as a sociological tool. Castro avoids artificial lighting and other technical paraphernalia that means an alteration of the subject being portrayed, making the final record as authentic as possible and the presence of the camera almost unnoticed.

Growing Up In Neverland implies, in its own title, consciousness and reevaluation around the specific context (The Cuban Revolution of 1959) in which these artists have come of age, and inserts their creative production into that context, alongside its avatars, misfortunes, precepts and utopias.