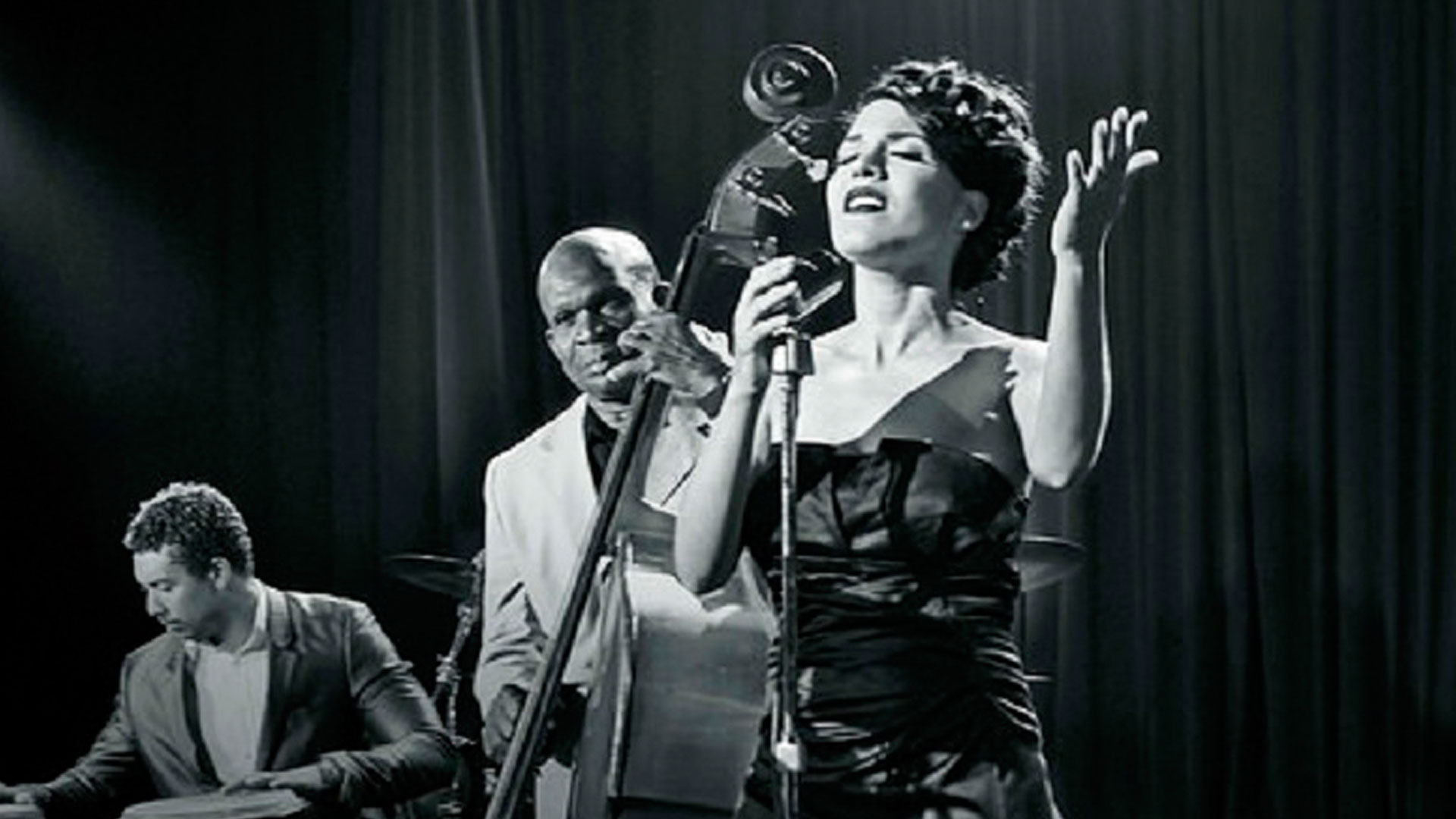 At the recent Lucas Awards in Havana, “Canción fácil,” the video clip starring Haydée Milanés and made by acclaimed film director Fernando Pérez, swept the awards for Best Video of the Year, as well as Best Director (Fernando Pérez), Cinematography (Raúl Pérez Ureta), Art Direction  (Alejandro Gutiérrez), Best First Work, and Best Video Song. Fresh from her win, Milanés spoke with Cuban Art News writer Michel Hernández about her upcoming projects, what it’s like to work with her father, and where she enjoys performing most.

After recording five albums, appearing in large and important venues in Europe and Latin America, and reaching the top of the contemporary Cuban music scene as a young songwriter renowned for the high quality and poetic character of her work, Haydée Milanés is paying tribute to the person responsible for this success: none other than her father, Pablo Milanés, founder of the Nueva Trova movement and a living legend of Latin American music.

At 34, Pablo´s youngest daughter is no longer trying to avoid her father´s shadow. She talked about this new phase of her career in an interview with Cuban Art News. The conversation took place in Nuevo Vedado, where she lives with her 2-year-old daughter and her husband, the audiovisual producer Alejandro Gutiérrez.

“My father is very important in my life. I admire him a lot—as a person, as an intellectual, and as an artist. He is a complete human being and is well aware of what is happening in the world. He has lived a lot,” said Haydée, seated on the sofa in the room where she works.

“At first, I wanted to get away from his influence and make my own work known. Now it´s time to pay him my own tribute, because he is certainly the greatest influence over my career.”

With a style that is quite distinctive in the local Havana music scene, Haydeé has released albums like A la felicidad and Palabras—the latter with songs by the renowned Cuban singer and composer Marta Valdés. For her new project, Haydée plans to record two albums featuring Pablo´s “new and little known songs,” including “Te espera una noche de éxito,” “A veces cuando el sol,” and José Martí poems, she said, “set to music by him.”

Where are you with this project?

It’s being realized. My father is very excited, and has given me the freedom to do it. It´s really nice to hear the blending of our voices. We used to sing together at home, and now I plan to record those songs on two albums. I want the first one to come out later this year.

Is there anything about your father that particularly encouraged you to undertake this project?

I’m still discovering facets of my father´s life. Some days ago, for example, he told me that when he worked in a printing shop, many books passed through his hands, and this stimulated his avid interest in reading. He also worked for a film magazine, and thus his love for cinema was born. He has lived very intensely. As a teenager he did many jobs and met many intellectuals whom I later encountered through him. All this attracts me about his life.

Knowing Pablo, I can imagine he is the main “critic” of your career.

I am interested in knowing his view on the things I do. It is very critical, and I really appreciate it. For example, he is happy with the album I did with Marta Valdés´ songs. Coincidentally, he recorded those songs the year I was born. My mom was pregnant with me, and I was also pregnant when I recorded the songs.

How is your relationship with your father, considering that you both have very different and intense careers?

We usually see each other on weekends. When I’m recording, I see him on weekdays, or he comes here and brings me his hard drive so we can copy some movies for him. Believe it or not, he is a total movie buff; he sees more movies than albums. He calls me and asks if I have any new movies, and if I do, he comes over right away. Now he is fascinated by his granddaughter. We see each other a lot, but not as often as I would like.

Tell us about Palabras, your album of songs by Marta Valdés.

I was quite surprised with the result of this album, because Marta´s music is not for the multitudes. Nevertheless, it has been widely accepted among Cubans with different creative concerns. This album covers various stages of Marta´s music; as you know, she was one of the major composers of the feeling genre back in the 1950s. Because of their quality, these songs will never get old.

I learned about many Cuban musical genres from my father, who has been devoted to musical treasures, and now also through Marta. Sometimes she mentions a composer´s name and gets upset because I don’t know him. I explained to her that many of my generation don’t know them.

The problem is that there was a time when many of these great musicians were bypassed in Cuba; they were not given the place they deserved. Also, there’s a lack of information, which takes its toll on young people today. It’s a very dangerous process, because a part of our national identity is being lost forever.

The prestigious Cuban filmmaker Fernando Pérez made the video clip of “Canción Fácil,” one of the key songs in the Palabras album. How did you get to Fernando?

I met Fernando during a concert I did in the Chaplin cinema as part of the Young Filmmaker’s event. I was always eager to talk with him because I admired him as an artist and a person. Later, he heard about my music and Marta´s album. I invited him to the concert, and he talked about his desire to make a video clip for“Canción Fácil.” In the concert, he had felt a very strong attraction to that song.

The video was made very quickly; it flowed very well. That was something big in my life, because I never imagined that Fernando would make me a video clip.

With Palabras and now taking on this ambitious project with your father´s songs, where do you think your career is at this point?

It´s been a long time since I’ve composed. I’m more focused on doing arrangements. I discovered with Marta´s album that I can make vocal, piano, or string arrangements, and I have enjoyed it a lot.

In my father´s album I also plan to do some of the musical arranging, and then I will focus on composing. I also want to finish an album I started with Brazilian singers, which I put aside during Marta´s recording. I’ll go back to this after my dad´s album. It includes some of my songs sung by Chico Buarque and also by Luis Melodía, a singer who is not well known in Cuba. I also plan to invite Pedro Aznar.

These days, we don’t often see you in Cuban performance spaces, especially in the big theaters.

The only place I feel comfortable playing my music is at Cafe Miramar; other facilities don’t have the right conditions for this type of work. My music is meant to be played in nightclubs, jazz clubs, but there are very few spaces for this.

I can’t do a concert in a theater every month because that is very expensive. There are theaters that don’t have lighting. You have to pay for that, and also for the sound system, and that takes a lot of money. A concert requires many things that the artist has to pay for, and it’s not profitable. You can allow yourself this luxury when it´s a big concert, but it’s not economical to do this more than a once a year. Not even with the box office proceeds they give you to cover everything, from the musicians to promotion.

You haven’t thought of “migrating” to private clubs?

I’ve heard a lot about those clubs; I think that some work even better than state facilities in terms of promotion. But right now my biggest passion is my daughter. Raising her takes so much time, and I´ve realized that playing and sharing with her gives me enormous pleasure. I wish I had more time to read, watch movies, stroll the boardwalk, watch the sea. I don’t go out much or go to concerts—that is missing in my life. But I´m sure that the time for going out and having fun will come back.

How do you perceive the thaw in U.S.-Cuba relations?

Some young Cuban musicians have wanted to be like North Americans, and have lost their own style when playing and making instrumental arrangements. Everyone has to be well-grounded in their roots. Today more than ever we have to look to the origins of our culture, which is very valuable. We must also listen to Cuban music and think about the feeling, the son, the rumba, and Cuban instruments.

This U.S.-Cuba exchange can be very helpful, because they are two great cultures that have been separated by political problems, but whose union will bring significant results. And to prove it, we just have to look forward.