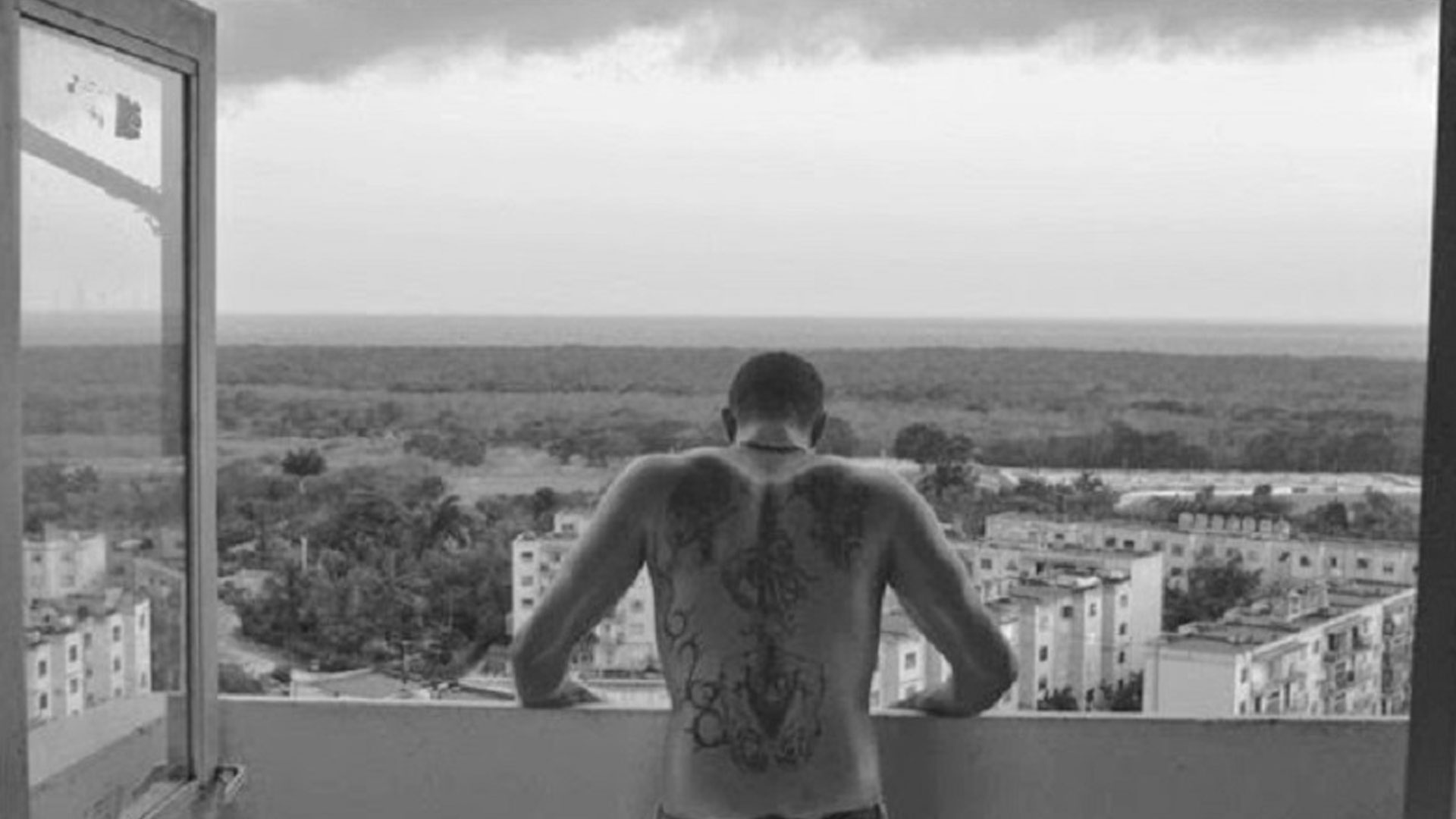 Carlos Machado´s film, La Obra del Siglo (The Project of the Century), tells the story of three men from different generations, living together in an apartment in Nuclear City, an area in Cienfuegos province near what was to have been the first nuclear power plant in the Caribbean. The collapse of the USSR left the project half-completed. Using the ruins of the project, the director refers to the human crisis this event left behind, reviewing Cuba’s recent past to make a universal comment about the fate of utopia.

Thomas Humphrey of Cineuropa has described the film as “a heavyweight of the new Latin American wave.” ICAIC’s Muestra Joven, the most important showcase for new voices in Cuban audiovisual production, chose the film to launch its 2015 edition. Two dozen festivals in the U.S. have invited Quintela´s film, and many more around the world.

La Obra del Siglo has now been selected by ICAIC as part of the official roster of the 37th International Festival of New Latin American Cinema, opening today in Havana and running through December 13. Cuban critic and film historian Luis Reyes Dean speaks with the director.

Which came first: the world of Nuclear City or the history of the characters?

It started with a script titled The Balcony, which Abel Arcos, author of The Swimming Pool, wrote long ago. I started rewriting it while studying at the International School of Film and Television of San Antonio de los Baños (EICTV). Coincidentally, I participated in a script workshop in Nuclear City, with the theater group La Fortaleza. There, I felt that this was the place for these three characters. It’s a forgotten place—there aren’t even road signs to get there. The locals sometimes go to the bank to collect payments, and they can’t get paid because they don’t appear on the list of pensioners.

What was the social reality you discovered there?

About the locals, I know that those who could emigrate did so, and those who could work in the tobacco factory did so, as did those who decided to raise animals. Those who couldn´t, killed themselves. Nuclear City is the place with the highest number of suicides in Cuba. The theater group La Fortaleza, as well as social and community services there, were created to reduce the number of suicides. Near this place is one called Las Quinientas, where the picapiedras—“the Flintstones”—live. “The Flintstones” are those who steal building materials to sell. I couldn’t put their story in the movie because it’s too big, I’ll make a short film about that.

As a Cuban independent film, getting La Obra del Siglo made was almost an adventure story. Where did the financial resources for production come from?

To access international funds from Cuba is very difficult: there is no law concerning cinema, there are few producers, people have no legal standing. Our producer, Uranio, is registered in London and only Abel Miyares (a producer who lives here), my wife, and I are involved.

The first money for the film came from World Cinema Amsterdam, from the Amsterdam Festival, where I presented The Swimming Pool, and then from the Prince Klaus Foundation, which gave me 5,000 euros. We did preproduction with that. Hernán Massalupi, an EICTV professor who produced titles like Whisky(Uruguay, Juan Pablo Rebella, Pablo Stoll) and Freedom (Argentina, Lisandro Alonso), had his own company, Rizoma. We applied to the Berlin Festival’s World Cinema Fund through Rizoma, which has won several times. WCF supported us with 35,000 euros. After that, Ventura Films, a Swiss company joined the project, and contributed 10,000 euros.

How did the Cuban Film Institute (ICAIC) support you?

ICAIC enabled me to get some services cheaper, such as the accommodations in Cienfuegos. They gave us permissions, hotel bookings. But everything was delayed because the German fund did not send money on time, due to a change of administration. We finally had to go ahead and shoot, after six months of waiting.

We had permission to film in Nuclear City, which is impossible. Abel Miyares, more familiar with production in the countryside, borrowed some money; the writer Abel Arcos, the soundman, and someone else loaned me funds. The whole shoot was done with loans. I did that because I was 29, but I will not do it anymore. Filming lasted 22 days in May 2014. The films you admire take time and money.

The editing includes a lot of archival material, historical images, as well as a bold, improvised structure.

We discovered the archival footage while doing research. With that, I knew I had material that would give me the luxury of not having continuity or doing without things during filming. Then, the editor, Yan Vega, came on board and we started working. In general, there are many things in the staging that reflect the rehearsals we had done with actors; other things drew on what was going on in Nuclear City and got transformed.

Your interest in creating a film with universal appeal is also noteworthy, because it goes beyond the familiar places and idioms that we’re used to in Cuban cinema.

As an island, we are so disconnected that we don’t realize that. It’s assumed that you want to make your own film, which is part of your heritage, and you also want people everywhere to see it and understand your world—even if that’s a delirium. Leaving aside Hollywood films, you come to understand a film from any country. And Cuban cinema needs that. When it achieves that, Cuban cinema will regain the recognition it had in the 1960s.

I met a guy in Rotterdam who thanked me for dedicating La Obra del Siglo to Sara Gómez, because according to him it has a lot of her spirit but is modern. And it is nice it to be connected not only to films of the 1970s, 1980s, or 1990s, but with previous works. [Sara Gómez (1942–1974) was an Afro-Cuban filmmaker who directed documentaries and a feature film in the early days of ICAIC.]

The political content of this work is evident. Are you willing to assume the risk of being interpreted from opposing viewpoints?

La Obra del Siglo is political, but not exclusively. One of its main points is to observe how the failure of that nuclear project affected the family. The extreme poverty is in the family, in human relationships, not in the fact that they have nothing to eat.

It is so easy to film poverty. Nuclear City is full of signs on empty buildings that say “Fatherland or Death,” “We Shall Overcome,” or “Resist.” It’s so easy to put the camera there. In my film, there are none of those signs. I was very respectful in dealing with that world. If it were a documentary I would do it, but this is a fiction film. It will bring you along in another way. From masculinity, for example.

Because, in the end, the film is about “who’s got the biggest.” It’s a movie where there are no women. The first time we edited the movie, it was realistic. But imagine going to Nuclear City to make a realistic film. It won’t make me look good, because I’m not from there. While there for just a month, hundreds of hidden stories better than this emerged, perhaps two hundred possible films, which are not here.

La Obra del Siglo uses a bit of that, but goes in another direction. It’s a social and political film that uses realism when needed. It digs up a lot of things that need to be put on the table.

What did you do next?

I made a film in Japan, thanks to the director Naomi Kawase. We met in Japan, at the festival in Nara. It’s a very small festival, where Naomi invites five filmmakers whom she likes, and she invited me and The Swimming Pool. The prize awarded by the festival is to make a film; Naomi becomes your producer and finds the funding so you can make a movie, under certain conditions.

I accepted because it is work, and also the chance to make an international movie which tells a story that has nothing to do with Cuba. In short, I need money to make the films I want to make in Cuba, money that comes from outside funds and producers. Here, these resources are not available, nor is there the Internet to access these funds, so you’re offline.

I can make Cuban films in Cuba, but I can also make a film in China or wherever I’m called. Costa Gavras, for example, can make films in Argentina, Germany, and Greece. In the end, it will allow me to get the resources I need to make good movies in Cuba, albeit smaller films. This is the opportunity Japan gave me: to make a movie in comfort, with conditions.

A version of this interview was also published in Cuba Contemporánea; adapted with permission.