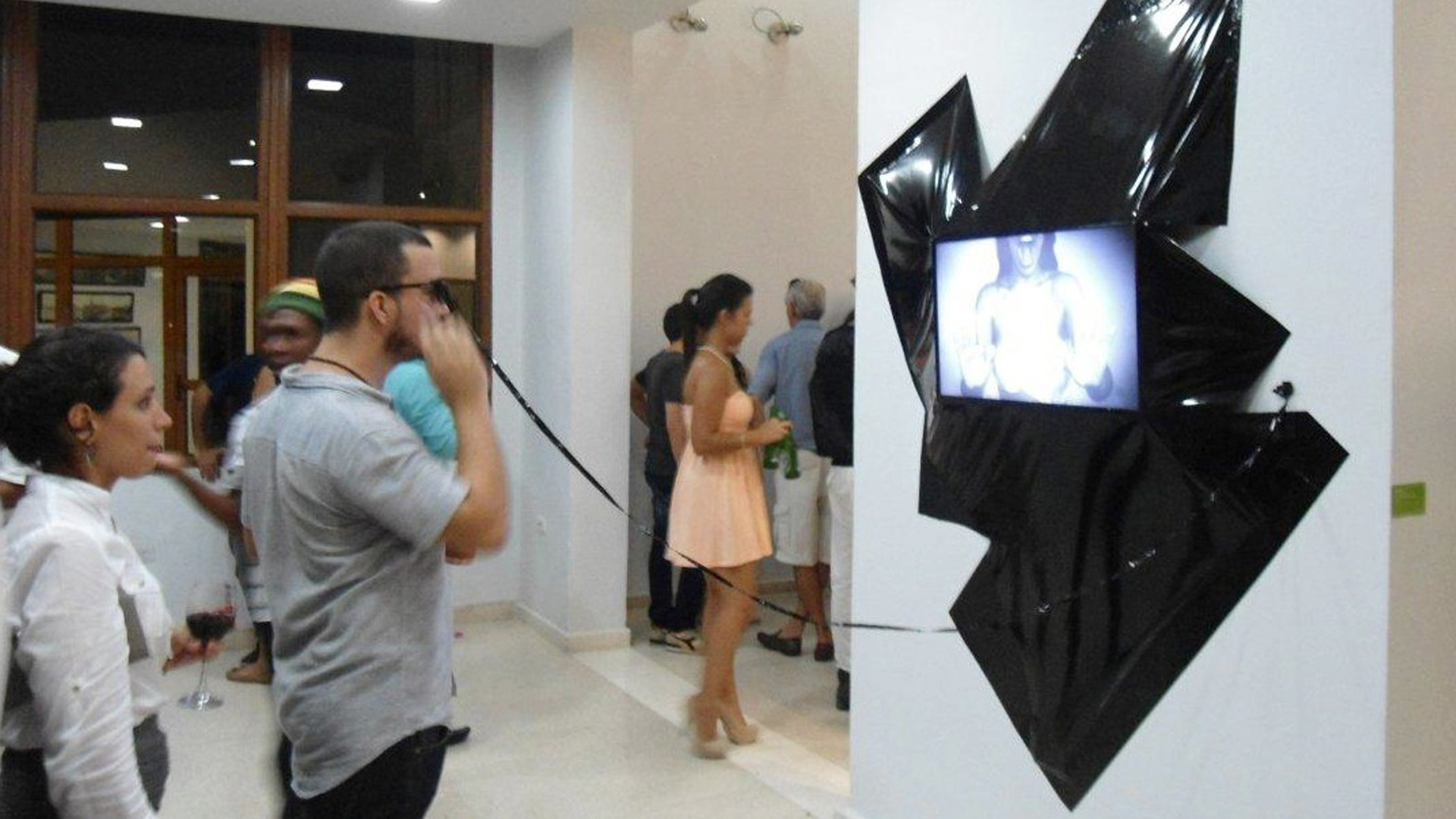 This month, the third edition of Post-It—a juried competition, exhibition, and sale of works by island artists under 35—ended its run at four Havana galleries. Art and visual media critic Hamlet Fernández, professor at the University of Havana and three-time winner of the Guy Cisneros National Prize for art criticism, takes Post-It 3 as a jumping-off point for an assessment of the current moment in contemporary Cuban art, and where the field is headed.

If we take as a reliable reference what was shown in the third edition of Post-It, the aesthetic offerings of our young artists would seem bleak. Organized by the state-owned Cuban Fund of Cultural Assets (FCBC), this competitive exhibition and sale is open only to artists under 35 years of age. During September and October, four galleries in the capital—Galiano, Collage Habana, Arte-Facto, and Artis 718—are exhibiting works selected by a jury.

Although 166 artists from across the country responded to the call for entries, and 48 of them were chosen by the jury, this is a segment of creative production that cannot be taken as representing the whole. In a competitive exhibition-sale, presumably, the artists most interested in participating are those who have not yet managed to find a spot in the market, or in high-profile exhibition circuits.. However, this edition of Post-It—which, it must be said, has not differed much from the previous two—allows us to reflect on certain aspects that can be generalized as characteristic of the current field of Cuban art.

One of these traits is the way Cuban artists are relating to the art market. Perhaps the commercial incentive is one of the reasons that a higher percent of exhibited works are two-dimensional, for the most part painting. Does this correspond to something like a new painting boom among young artists? Or is it a strategy for getting into an expo-sale? It’s easy to suppose that the second assumption is nearer to reality.

The problem isn’t that many of these young people have decided to try their luck with two-dimensional work, even when we know that they also work with other media and techniques. What is truly alarming is the low quality of the vast majority of the works. Inconsistent pictures are plentiful, both in purely pictorial terms and in discursive and conceptual intention: boring painting, sometimes poorly made, with no visual or conceptual force. With the exception of a few artists who are already recognized as painters, with mature work with already defined contours, it seems that the rest choose painting as a business strategy. The lack of technical skills and ideas to make something relevant contributes to the thwarted success of such efforts.

Art education has a clear responsibility regarding this lack. While some of the competing artists are self-taught, most come from middle-level schools, and even from ISA (Instituto Superior de Arte). If paintings displayed in Post-It 3 are of poor technical quality and devoid of cultural substance, it means that academic training is not producing good results in any of these areas. Students are not learning rigorous technical skills, nor are they acquiring the intellectual capacity to develop an aesthetic discourse with conceptual processing. The question of art education at both mid- and high levels is the subject of urgent debate, in which updating the education program and rethinking the kind of artists to develop must be core issues.

In Post-It 3, photography has been better represented, in line with the dominant conceptual and visual thinking of the moment. But I think very little photographic work was displayed in the exhibitions, considering the quantity and quality we have seen recently in both solo and group exhibitions. Presentations of sculpture and installation works were few and timid, and so were video works. Conceptual, performative, or more experimental works were glaring in their absence.

One is tempted to think that, for our youngest artists, the market imperative has become a form of a priori self-censorship, with a lack of creative risk, with thematic and critical timidity—in a single phrase, with aesthetic obedience. But obedience to what? To the market? To the institutions run by management committee? I think it is a tacit obedience to a low-profile market: a market in objects that satisfy decorative needs.

We know there is another level of market that can distinguish the good from the bad, the aesthetic fake or the kitsch from the risky search for new horizons in artistic expression. Betting on the shortcut that ends at the souvenir market is professional suicide. And for its part, the serious market must abide by an aesthetic discourse that aspires to be artistic rather than salable, not simply offering objects for sale under a façade of art.

In this situation, the institutions involved in developing promotional strategies with a commercial profile—that is, the Cuban Fund of Cultural Assets and its Post-It project—should be more demanding in the choice of works. A more rigorous selection based on quality, not quantity, would improve the general image of the show and of young Cuban art.

It is better to have a competition with 20 works of great quality than to cram four galleries with objects of dubious artistic validity. This would create a budget surplus that could be used for further promotion and marketing, with a view to building a more discriminating market. It would also save the public from a waste of time and energy.

I think that what is happening in the visual production of young people confronting the market is indicative of a more general dynamic expressed in contemporary Cuban art. In the recent 12th Havana Biennial, the attitude of a good percentage of the visual artists is very similar, though on a different scale, to the phenomenon we see in the latest edition of Post-It.

It is a fact, backed by the events of the last three or four editions, that the Biennial, for local artists, is no longer an event to showcase the most innovative, daring, and experimental works, in terms of what can be proposed and experienced as creative discourse. It has become a supportive context for wholesale selling.

Zona Franca, in the Morro Cabaña Complex, has not offered an overview of the newest, most worthy, and most experimental contemporary Cuban art in either of its two editions. Rather, it has been a chaotic showcase flooded with objects made for the market—with some honorable exceptions, of course. I don’t think you can say anything different about the numerous Open Studios all over the city.

It is not new, nor will it scandalize anyone, to say that the Havana Biennial has gradually become a fair for Cuban art. This has several causes, of course. The first is that what is considered the official show is each time becoming weaker, more diffuse, and more difficult to appreciate, due to the number of ephemeral events scattered throughout the city.

A great number of the foreign artists invited by the curators are completely unknown, even in their countries of origin; and in many cases their proposals are unattractive both for the Cuban public and for the foreign collectors and curators visiting us. Consequently, the Cuban work overrunning the city becomes the main cultural attraction in the big market of casual tourists.

If the management of most state commercial galleries is inefficient, if they don´t have the budget to attend major international exhibitions, if the burgeoning private initiative is not legalized, it´s completely understandable that the Biennial becomes a great opportunity to hit a market that remains closed for most Cuban artists.

How can we complain if this anxiety-provoking way of opening the market at the expense of creative rigor is replicated and expressed in more modest events, such as a competitive exhibition and sale like Post-It?

These critical assessments aren’t meant to demonize the market. The problem is that Cuban art is tied to a low-level market lacking in rigor—and this, at a time when quality should be a number-one priority, especially in events that become a barometer of the national art production.

The underlying structural problem seems to be an imbalance in the internal functioning of the field of national art. The market should be a subfield that functions in an interrelated way with the rest of the subfields. But in Cuba, the domestic market is virtually nonexistent—with the exception of weak institutional collecting—which makes production dependent on the demands of a foreign market.

This foreign market is difficult to access. Therefore, when the market looks towards Cuba, as happens in the Biennials, artworks that haven’t been sold in years must be offloaded in less than a month.

With the boom in tourism, especially from the North, perhaps that imbalance affecting the field of Cuban art since the 1990s will find compensation. Or perhaps the tendency of aesthetic complacency within a pedestrian market, expressed in Cuban art at this moment, will become even more ingrained.

That looming commercial apotheosis can flood artists’ pockets with money, and also the management personnel, but it can also flood the Cuban contemporary art field with aesthetic mediocrity, conceptual inconsistency, political indifference, and lack of cultural and historical commitment to Cuban visual arts. Eventually, this behavior may end up undermining the market’s interest in Cuban art, if the mercantile tendency wins out over a creativity not subordinated to the market.

The weight that tips the balance will depend on the artists, on the management of state and private institutions, as well as on all professionals involved in the dynamics of this field.