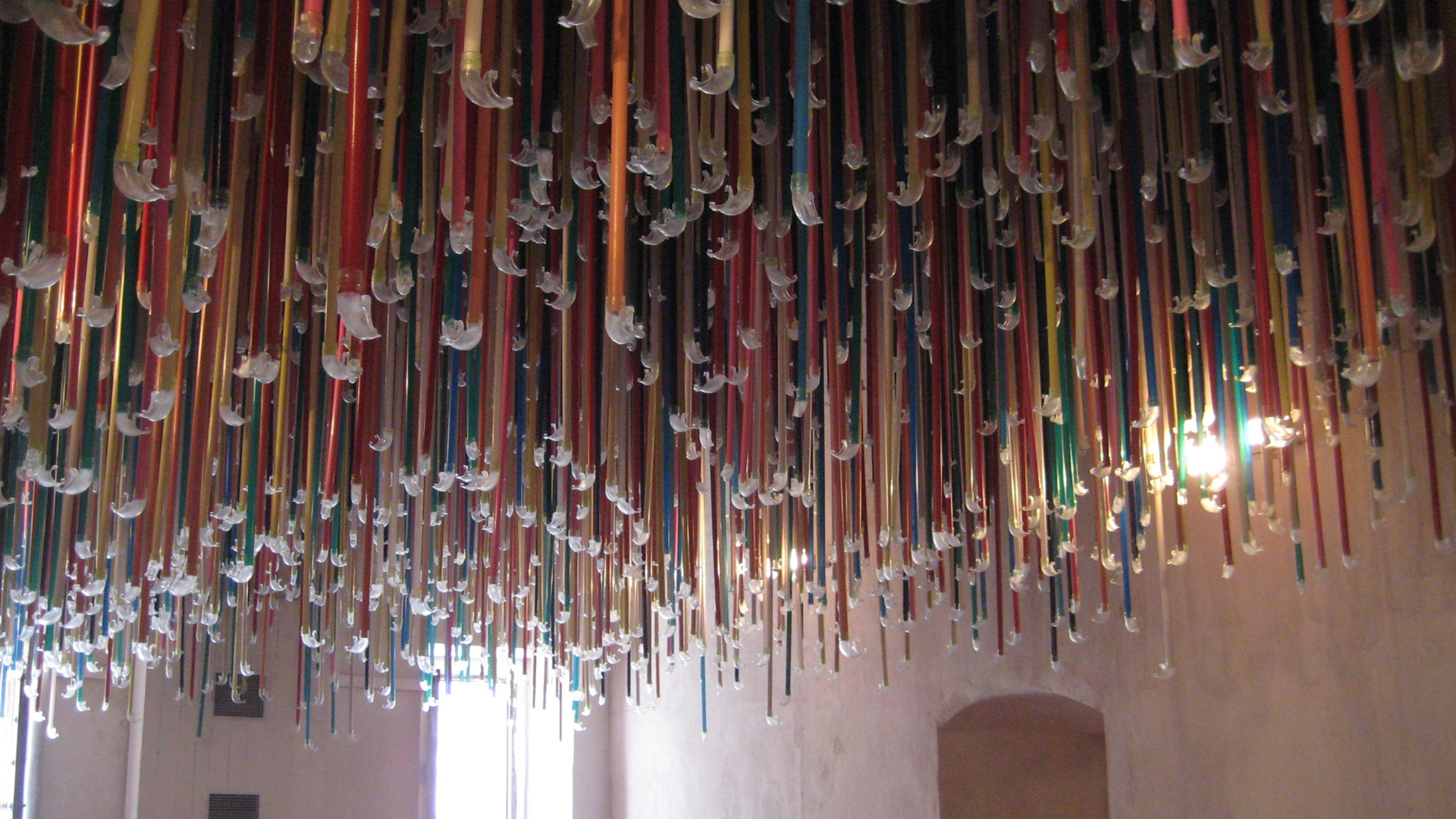 Concrete Cuba in London.  Artists associated with the group Los Diez Pintores Concretos (Ten Concrete Painters) take the spotlight at David Zwirner, in an exhibition showcasing the group, active in the late 1950s and early 1960s. In all, 11 artists are featured, including Rafael Soriano, José Ángel Rosabal, Loló Soldevilla, and Salvador Corratgé. Concrete Cuba opens this Friday, September 4, with a private viewing from 6 to 8 p.m., and runs through October 3.

And Martínez-Cañas. There’s more than one show opening in Chelsea next Thursday—September 10 also marks the opening of María Martínez-Cañas: What Remains at Julie Saul Gallery. Bringing together two distinctly different bodies of work—one from the 1980s, early in the artist’s career, the other, current works on paper—the show illuminates Martínez-Cañas’s longstanding interest in process, and her inventive experimentation with photography as a medium. On view through October 24.

Estévez in Miami. Taking its title from an ornate kite featured in the exhibition, Carlos Estévez: Celestial Traveler opens at the Frost Art Museum on Saturday, September 12. The reception runs 4–7 p.m. The show is on view through January 3.

Intersections too. With a title that references Dada and Surrealism, as well as Miami’s increasing importance as a hub for Latin Americans, Intersections (after Lautréamont) introduces the work of artists in CIFO’s 13th Grants & Commissions Program–among them, Javier Castro, who recently completed a residency at Cannonball in Miami. The show opens at CIFO Art Space this Thursday, September 3, with guided tours by the artists at 6 p.m. and a reception at 7. The show runs through November 1.

And Pérez Monzón for Art Basel. One of the hits of the recent Havana Biennial is crossing the Florida Strait this autumn, just in time for Art Basel Miami Beach. Gustavo Pérez Monzón: Tramas, which debuted at the Museo Nacional de Bellas Artes in May, will open December 3 at CIFO Art Space, where it will run through May 1. Curated by Elsa Vega and René Francisco, the show features more than 70 works made between 1979 and the late 1980s.

Feminine Voices in San Francisco. The Innovation Hangar at the San Francisco Palace of Fine Arts is the scene of a one-day show of 40 women artists from the island. Running 11–4 p.m. on Sunday, September 13, Feminine Voices and Poetics includes work by Aimé García, Belkis Ayón, Lidzie Alvisa, Susana Pilar Delahante, and Mabel Poblet, among others.

Mendieta in Minnesota. Covered in Time and History: The Films of Ana Mendieta brings together 21 films and 26 related photographs in the largest assemblage of Mendieta’s film work to be presented in the U.S. The exhibition opens on Tuesday, September 15 at the Katherine E. Nash Gallery at the University of Minnesota, which organized the show.

And catching up on continuing exhibitions…

Lavastida in Miami. History, ideology, and collective memory are themes explored in Hamlet Lavastida: Prophylactic Life. Focusing on the concept of “prophylactic work” as an ideological tool in the early years of the Revolution, the works reflect on official documents and images aimed at creating the “New Man.” Curated by Janet Batet, the show runs through October 10 at Dot Fiftyone Gallery.

Esquivel in Chile. The Centro Cultural Matucana 100 in Santiago kicked off its new season with a cycle of six exhibitions on the theme of politics and celebrity—among them, the international group show Intimate Strangers: Politics as Celebrity, Celebrity as Politics. Included among the show’s 38 artists: Alexis Esquivel, whose paintings and murals have depicted Barack Obama, Raúl Castro, and other political figures. On view through September 28.

Bruguera at Yale. Since 2002, the Yale World Fellows program has brought “accomplished, mid-career, global leaders” to the New Haven campus for a four-month, immersive residency. Running August–December, the program combines a 15-week global affairs colloquium, informal leadership conversations, and self-directed study. Among the 16 fellows in the class of 2015: artist-activist Tania Bruguera, who in July was also named New York City’s first artist-in-residence for the Mayor’s Office of Immigrant Affairs. Since December, Bruguera had been in Havana, resolving legal issues in connection with an attempted performance event in the Plaza de la Revolución. According to the Los Angeles Times, she flew from Havana to New York on August 21, and was picked up at the airport by representatives from Yale.

Y en español. And for Spanish-speaking readers, an interesting interview on Cuban art with Chelsea gallerist Sean Kelly, which appeared earlier this summer in El País.

Sheet music at the Wolfsonian. The Wolfsonian–FIU Library is celebrating the diplomatic warming trend with a new gift to its collection: some eight boxes’ worth of sheet music related to the Cuban War for Independence, better known in the U.S. as the Spanish-American War. The cover images in particular reflect, in popular culture terms, U.S. attitudes toward Cuba and the war.

New album from Arturo O’Farrill. Another project with historical roots was sparked by the thaw in Cuban-U.S. relations. O’Farrill’s Cuba: The Conversation Continues imagines picking up the legendary 1940s musical exchange between U.S. jazz great Dizzy Gillespie and Cuban master percussionist and composer Chano Pozo. Released late last month, the double-disc album features music by Cuban and U.S. composers, including a changüí by Cotó (Juan de la Cruz Antomarchi) and a 13-minute suite in honor of José Martí. The musicians include O’Farrill and his Afro Latin Jazz Orchestra, Bobby Carcassés, Alexis Bosch, and Danfis Prieto. And listen to O’Farrill as guest DJ on a broadcast of the U.S. radio program “Alt.Latino” on NPR here.

For last-minute Update additions that came in after deadline, see the photo album just posted on the Cuban Art News Facebook page.