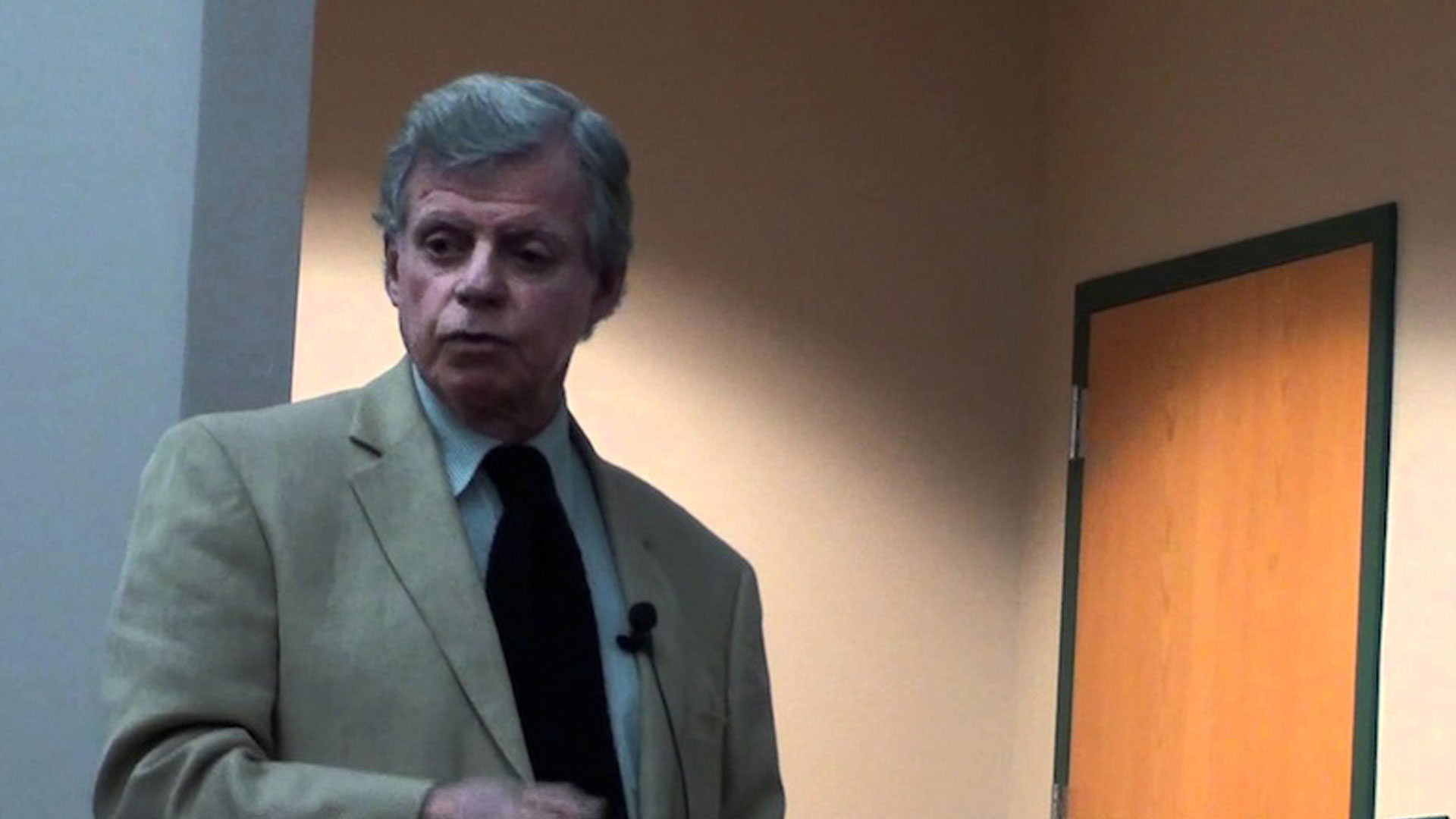 Architecture in Cuba was kidnapped by construction: that’s one of the ideas most often stated by prominent Cuban architect and urban planner Mario Coyula Cowley (Havana, 1935–2014). Throughout a long and productive life, Coyula shared his views through articles, lectures, and interviews, in which he identified the main conflicts facing Cuban architecture from January 1959 to the present.

Playing different roles, Coyula took part in a variety of scenarios that made him one of the major critics of architecture and urbanism in the Greater Antilles. In his career he served as Doctor of Technical Sciences and emeritus professor of the José Antonio Echevarría Higher Polytechnic Institute, director of the Havana Architecture and Urbanism organization, a member of the Group for the Integral Development of the Capital, and first president of the Havana Monuments Commission. He received the National Architecture Award and the National Award for Cultural Heritage for lifetime achievement.

Why did major investment in Havana cease after 1959?

It was due to politics and social justice. Also, remember that most of the Revolution’s leaders were not from Havana but from the eastern part of the country, where there was a kind of prejudice: seeing Havana as the beautiful woman who spends it all, leaving nothing for the rest of the country.

The government’s idea was to develop the rest of the country by making investments in new jobs, factories, dairies, social structures, and hospitals. I think it was the right policy, but it remained in place too long. Also, it’s one thing not to make new investments, and another not to repair the buildings. So the capital went to ruin. That’s stupid even from an economic point of view.

When I was a member of the Group for the Integral Development of the Capital, a specialist suggested that it would cost a lot to repair Havana, about three billion dollars. In response I asked if it was not logical to spend money to preserve a city with such a tremendous value. That’s the mentality that we often do not have.

I remember Dr. Eusebio Leal’s initial struggle to restore the Old Havana. There were those who were for its demolition—they did not know how to address that problem. Happily, they couldn’t do it: more than 70,000 people living there had nowhere else to stay. That’s how the development of the Centro Histórico came under the direction of the City Historian’s Office.

That is one of historian Eusebio Leal’s achievements: he proved his theory. It is something we should extend to the rest of the country. If you see it as a burden on your shoulders, you’re lost. But if you see it as an investment, you’ll solve many problems.

What was the thinking behind the new construction in the rest of the country?

After the 1960s, that was the phase when architecture was kidnapped by construction and therefore was no longer architecture. The interest in beauty, functionality, expressiveness was lost. The problem was to fulfill the goal and that’s all. The funny thing is that beauty began to be rejected out of the supposed need to put up many good buildings. What we ended up with was a few ugly, poorly constructed buildings.

Currently we have that same mentality. When it comes to construction plans, we’re still thinking in terms of the crane, the “grand panel” system, slow and expensive technologies with investments in manufacturing. We take them on, but then we realize that they no longer work. It’s amazing, we don’t learn from these experiences.

We think in terms of the building, but no one thinks of the environment, landscape, services, and infrastructure. The last time we thought like that was early in 1959–1961, in the so-called Pastorita buildings in La Habana del Este. They made 8,000 complete houses, with kindergartens, schools, parks, shops, clinics, interior streets, parking spaces. When a building is not finished it remains halfway. Or worse, workers improvise it. In the end, it’s crap.

What alternatives could so-called cuentapropistas—the self-employed entrepreneurs—and the state and non-agricultural cooperatives use to give new life to Havana’s La Rampa?

The involvement of all these stakeholders is needed, but with good projects. The problem is that we’re in a vicious cycle. I’ve written about this, I’ve talked about it, but there is still some prejudice around authorizing the private work of professionals in their own professions. It’s crazy that an architect cannot have a private practice. Who will ensure that these small cafes opened by individuals or the state will have well thought-out, well constructed designs?

There is talk of reasserting urban control through the procedure of building permits. But the building permit should be based on a project. Where are the professionals to make those cafes, restaurants, private businesses, and state projects?

I think they should re-introduce building permits, and that implies resuming the projects. What can a state enterprise do in the private sector? State-owned enterprises are responsible for airports, and major projects like the Mariel Terminal—not for private cafes.

At the moment, nobody is in charge of the small projects that give shape to the city by being at street level. When you move through the city, what you see is what’s in front—and lamentably, what people put there obscures the buildings’ facades. Today, facades are hidden behind car porches, garages, workshops, and sheds that people put up to sell things.

Many architects want to join together in cooperatives, but the Ministry of Construction disagrees—as if architecture in Cuba was the property of that ministry.

Because there were prejudices. First, the idea of ​​integrating, on a national level, the vertical activities of different agencies was accepted only reluctantly. And only at very high levels, because it’s politically correct, but not by those who had to put it into effect. They saw it as interference—meddling in their domain.

For one project, I remember securing, through collaboration with a foreign NGO, a portable machine to make construction blocks—one of the things local industries usually need to address a need at the neighborhood level. That was a fight to the death. The building officials in the town declared that the machine had to be for them.

In the workshops we supported small businesses, such as an artisanal business in La Güinera, where women made bags and wallets from hyacinth, a water plant that has very good fibers for weaving. Then the Provincial Directorate of Handicrafts came and said the workshop should be under their supervision.

They had the kind of mentality where what is not understood is frightening. In reality, the TTIB are an element, perhaps not necessary, but very convenient for democracy working at the grassroots level against the vertical thinking that’s dictated from a Ministry on down. These leaders never know what people really want. They don’t ask the people who receive a product whether they like it or would prefer something else.

Theoretically, to guarantee the continuity of the project there had to be a taller for each Consejo Popular (People’s Council) in Havana, but only 20 of them remain. Delegates are elected, they come and go, and every time a new one comes everything must be explained again. But the talleres remain, because they’re the professional strength of their People’s Councils.

The banality of new construction—what’s the best way to address this issue?

It is very difficult to solve this problem. We have lost the guidelines for comparison. Before the Revolution, a mason would have learned the skill from his father, who might have worked with leading architects on some of the mansions in Vedado. They were very careful, with good taste and enormous practical skill.

La Habana del Este was good because the workers had not yet learned to build badly; quality was still a basic requirement. The problem is in the point of comparison. It is important to look for quality regardless of the money spent, as Celia Sánchez did in the Parque Lenin.

There are no longer individuals who know how to build well. Or they remain silent to avoid trouble. It’s important to make a few well-constructed buildings in visible places. With the Revolution, the construction was done beyond Havana, then at the periphery of the capital—including the restricted-access projects that the architect Salinas did in military areas or in MINFAR offices. You have to build good, visible projects as examples or demonstrations.

Why are ideas and projects from the Faculty of Architecture in Havana not better known or publicized?

Out on the street, there’s very little promotion of what the Faculty does. This is because CUJAE is far away, and everyone finds it hard to get there and back.

Faculty exhibitions were opened in the House of Green Gables, in Old Havana, at UNEAC, but they not enough. We have to do more. The work needs to be seen on TV. We need to display images of good works, even if they’re just at the idea stage, so people can know what is wrong and what is right.

There are journalists with little architectural knowledge writing about the work, speaking of the brigade who built it, or the driver. They never mention the architect who designed it, as they have no knowledge by which to assess whether the building is good or not. Ugly, badly built, dysfunctional buildings are often palmed off as bonita. Criticism is frowned on because there’s always a government functionary in the background.

The problem is not technology but organization, motivation, structure. Technology should be properly used, depending on the place and circumstances, without our falling into the delusion that we will solve the housing problem in Cuba through access to cutting-edge technologies.

Years ago, when a special project was being planned, there was a search for the best architect in Cuba. A group of architects and engineers were selected, who were to create their works in an office where all their material needs were taken care of and they had the spiritual space in which to work. That’s what Celia Sánchez and Pastorita Núñez did.

And the results of many competitions—where are they?

Ten years ago, UNEAC launched a competition with the goal of repairing the sidewalks of La Rampa and adding mosaics with new works by more contemporary artists. We were able to place only one, on the corner of Don Quixote Park. Competitions encourage people. There are alternatives.

We have done projects for almost all places in Havana: to rehabilitate Calle Cuba, Chinatown, the port, La Rampa, the Plaza de Cuatro Caminos, the Customs Office, and the Tivolí Factory in Cerro, where there were plans to build a cultural center. You have to invest thought, so that maybe you can withdraw money later.

My wish is that Galiano again becomes Cuba’s shopping street, that Calle Colón is revived, and that the Otto Parellada (Tallapiedra) power plant is turned into a museum of modern art or science and technology. Depressed areas in cities around the world have been rescued by putting museums there, or universities where young people add life to the streets and thus fight against prostitution and drugs. They are investments worth making.