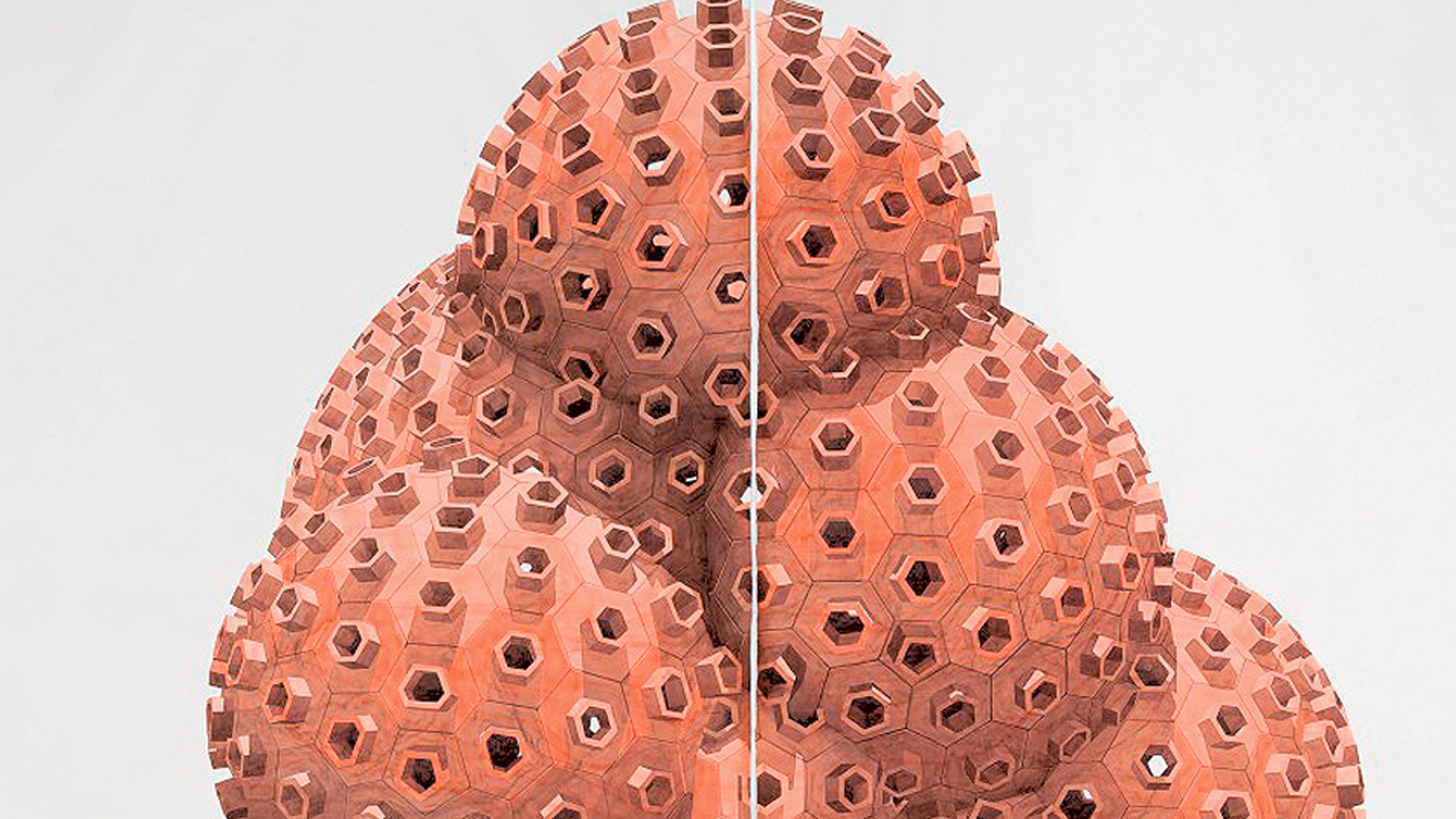 Gelabert in Miami. An active member of the Cuban art scene in the 1980s, these days Florencio Gelabert may be best known for Islands, his colorful offshore contribution to the first edition of Detrás del muro (Behind the Wall) in 2012, and Stella, his installation of black tree stumps set on mirrored squares in this year’s edition. At the MDC Museum of Art + Design, Journeys: A Dialogue with Time presents a new series of large-scale sculptures, along with installations, drawings, and sketches. On view through August 16.

And Carlos Luna. At the Frost Museum of Art, Green Machine: The Art of Carlos Luna traces the artist’s path from Cuba to Mexico to Miami, and the many influences he encountered along the way. Presenting several distinct cycles of work, the show includes a series of ceramics produced at a renowned pottery in Puebla, Mexico, as well as tapestries reproducing Luna’s works. On view through September 13.

Novoa, too. You may have seen our “Bienal Snapshot” on Emptiness, Glexis Novoa’s installation for this year’s Detrás del muro. Now, an “intervention/exhibition” of the same name is on view at the University of Miami’s Lowe Art Museum. Like the work in Havana, Miami’s Emptiness features the artist’s meticulously drawn, hybrid cityscapes to lead viewers through the space. On view through October 1, Emptiness will close with a public “effacement” ceremony led by Novoa himself.

Korda in Greater LA. Make that Long Beach, specifically, where the Museum of Latin American Art (MOLAA) is presenting 19 photographs of the Cuban Revolution’s early years. Taken by Alberto Díaz Gutiérrez—better known as Korda—the vintage prints in Korda include the iconic portrait of Che, arguably the most widely reproduced photograph of our time. On view through September 6.

And save the date. Mark your calendar for February 2016, when MOLAA celebrates its 20th anniversary with its first Biennial of Latin(o) American Art. The invitational exhibition will include art produced by a full spectrum of Latin American artists living in their native countries, the US, or abroad, who are connected to Latin America through their ancestry. The three curators for the exhibition are Chon Noriega, professor in the UCLA Department of Film, Television, and Digital Media; Elvis Fuentes, former curator at El Museo del Barrio and project director on the multi-museum show Caribbean Crossroads; and Dermis Leon, an award-winning curator based in Europe.

Estévez in Lima. The full moon as a source of illumination—of the mind as well as the nighttime world—is the inspiration behind Carlos Estévez: Plenilunio, a new show of solo work at Galería Enlace Arte Contemporáneo in Lima, Peru. In 15 canvases and four drawings, Estévez explores themes of family ties, the meaning of success, and spiritual journeys. On view through July 31.

And a save-the-date for Miami. Carlos Estévez: Celestial Traveler opens with previews on September 9 at the Frost Museum of Art, where it runs through January 3.

Los Carpinteros in Vienna. Forty years after it joined with New York’s MoMA to organize the exhibition Drawing Now, Vienna’s Albertina museum returns with Drawing Now: 2015, an international show surveying the draughtsman’s art over the past ten years. Among the exhibition’s 36 artists or groups are Los Carpinteros, represented by more than one large-scale diptych drawing. On view through October 11.

Alpert Award to Bruguera. The Herb Alpert Award in the Arts is an annual prize given to one risk-taking, mid-career artist in each of five categories: dance, film/video, music, theater, and the visual arts. This year’s winner in the visual arts is Tania Bruguera. “Making videos and installations as well as performances, she appropriates the resources of power to create power, doing this through the means of art,” reads a statement on the Alpert Awards website. The award carries a cash prize of $75,000. Bruguera remains in Havana to address ongoing legal issues.

Princesa de Asturias Award to Padura. The prestigious Princess of Asturias Award for Literature has been won by Leonardo Padura. Chosen from a field of 27 candidates from 18 countries, Padura was cited for his “impeccable exploration of the story and ways of telling it.” He is best known for his quartet of Havana detective novels and more recently The Man Who Loved Dogs, his 2009 novel based on the life of Trotsky’s assassin Ramón Mercader. The award carries a prize of 50,000 euros. Previous winners include novelist Philip Roth, playwright Arthur Miller, and UK writer John Banville.

Cuban Films in NYC. Just opened last night, The Americas Film Festival of New York runs all week. On the schedule: several short films from the island, and on Tuesday, June 23, at 6:30pm, a screening of Omara: Cuba (2015), by Lester Hamlet. Plus, on Wednesday evening at 6:00, the 2013 documentary No Limits, about artist Alexandre Arrechea and the fanciful skyscrapers of his Park Avenue public art project. For details, see the film festival schedule.

Unfinished Spaces Goes Global. We hear from our friends at Unfinished Spaces that the acclaimed, award-winning documentary about Cuba’s National Art Schools is available for streaming worldwide on the VHX platform, along with half-a-dozen streaming platforms in the US. For links, or info about buying the film on DVD, see the Unfinished Spaces home page.

Cuban Art Awards on PBS. Last week, the US-based, nationally broadcast PBS News Hour featured a five-part series on “The Cuban Evolution.” The segment on the visual artsincluded scenes from last month’s Cuban Art Awards event at the Wifredo Lam Center, and an interview with Howard Farber of the Farber Foundation, sponsors of the Cuban Art Awards (and Cuban Art News). Also of interest: the segment on Havana’s architecture and urban fabric, featuring interviews with Dr. Eusebio Leal Spengler, Historian of Havana, and art and architecture conservator Rosa Lowinger.

Farbers and Pizzuttis Named to Top 200. Recently, the online magazine Artnet News posted its list of 200 top collectors worldwide. Among them are two couples noted for their focus on contemporary Cuban art: Cuban Art News publishers Howard and Patricia Farber of the Farber Collection, and Ron and Ann Pizzuti of the Pizzuti Collection. Of the Farbers, Artnet News wrote that they “fell in love with the art of Cuba during a visit to the island in 2001, and have since created a stunning collection of some 200 pieces.” And the Pizzutis, Artnet News said, “have recently amassed a stunning collection of contemporary Cuban artists.”