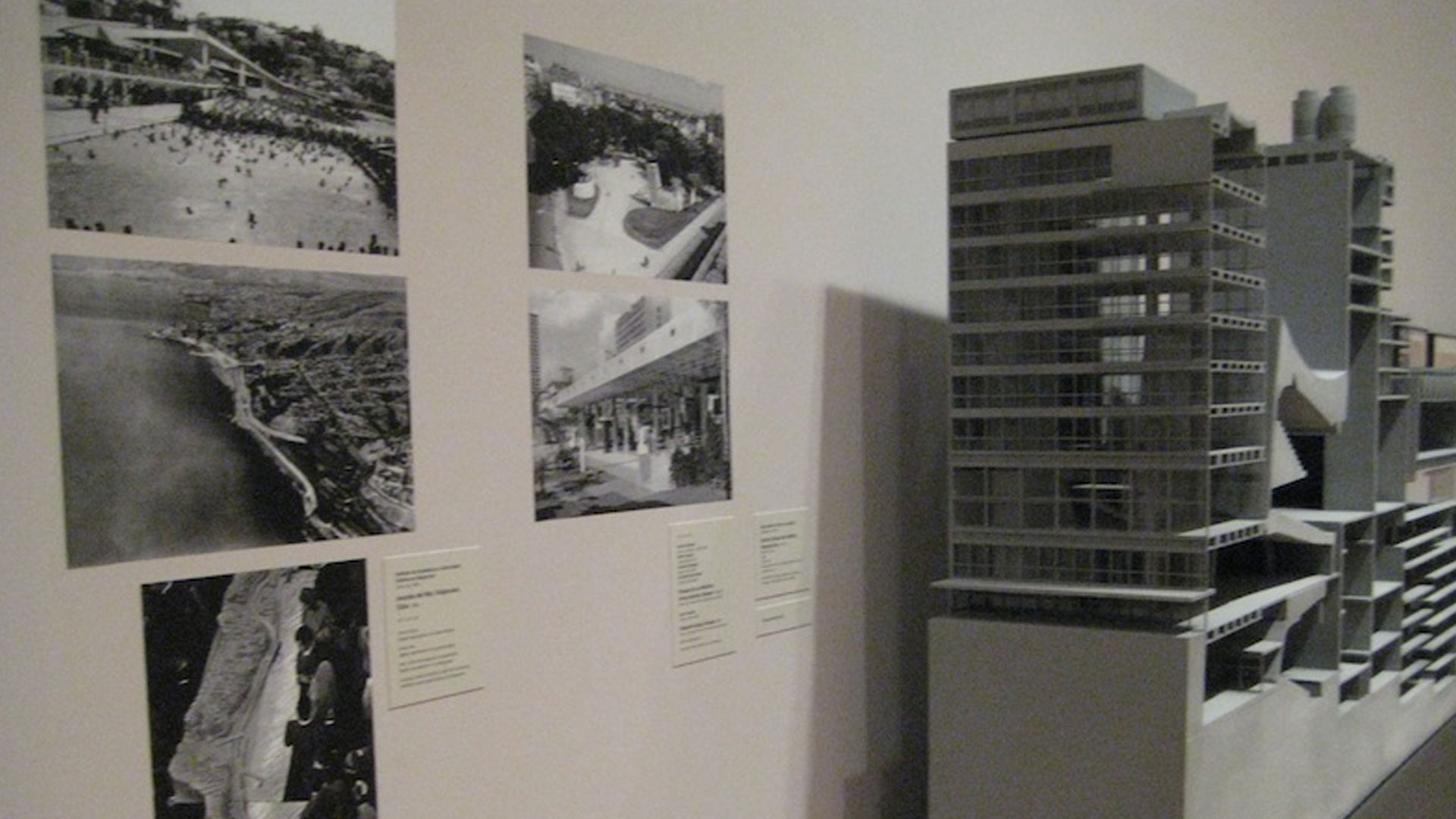 To piece together a coherent overview of 25 years of architecture in a region as large and varied as Latin America and the Caribbean is a daunting task. But Latin America in Construction: Architecture 1955–1980, the new exhibition at the Museum of Modern Art in New York, seems to have accomplished that goal.

With more than 500 works on view—including architectural drawings and models, vintage and recent photographs, and rare film footage—the exhibition explores themes of cities in transition, experiments in housing design, utopian (and dystopian) architecture, and the gradual internationalization of Latin American architectural practice.

In the process, it also brings to the forefront important examples of modernist Cuban architecture. More than 50 works in the show—most of them photographs—document projects by such architects as Mario Romañach, Humberto Alonso, Juan Campos, Emilio Escobar, Mario Coyula, Matilda Ponce, and Alberto Robiana, among others.

Assembling the Cuban component of the exhibition “was one of the toughest for us,” said the show’s curator, Barry Bergdoll, in a quick interview during the media preview, because of the difficulty in accessing the island’s architectural archives. But the curatorial team was able to secure material from private archives, resulting in what Bergdoll calls “very, very important photographs” appearing throughout the exhibition.

“I think the important thing here is that we treat Cuba as part of this big conversation,” said Bergdoll, “not as a separate country. We have not embargoed Cuba in this exhibition.”

In his introductory remarks to the audience at the media preview, Bergdoll called the exhibition “a historical investigation, reopening questions from that period for exploration.” He noted that with three degrees in art and architectural history from US universities, “I was taught nothing about this architecture.” He later added, “Even the little bit that I knew was a non-verifiable cliché.”

In the introductory gallery, “A Region in Motion,” a seven-screen film installation offers a poetic glimpse of the hectic modernization that took place in the decades before 1955 in seven cities, including Havana. Other footage, shown on small flat-screen monitors throughout the exhibition, focus on specific architectural projects—including Havana’s National Art Schools (now ISA), designed by Ricardo Porro, Roberto Gottardi, and Vittorio Garrati.

“There’s a wonderful film that no one’s ever seen before, that Garatti recently discovered and provided for us,” Bergdoll said of the display about the National Art Schools. “You’ll see models, images, plans, and then this unknown film footage.”

Here, a close-up of the wall display, with the rediscovered film footage playing on the small flat-screen monitor at lower right.

One reason the National Art Schools project is so important for the exhibition, said Bergdoll, is that it’s part of “the Cuban reflection on ‘Is there an alternative way toward national development, towards modernization, that might be a critique of what the capitalist world is doing?’ It’s a very interesting moment of alternative experimentations in Cuba.” For him, the National Art Schools are “absolutely key to that exploration.”

Here, a wider shot of the National Art School wall display, seen as part of a broader exploration of urban development.

In the section of the exhibition exploring cities in transition, the display included photographs of the Parque de los Mártires Universitarios in Havana by Emilio Escobar, Mario Coyula, Sonia Domínguez, and Armando Hernández, top at center; and the Pabellón Cuba by Juan Campos, bottom center.

A wall display in the section on experiments in housing design included, at left, photos of Las Terrazas Community in Sierra del Rosario, Pinar del Río province, by Mario Girona and Osmany Cienfuegos; and a photo and drawing of a multiflex housing system in Havana designed by Fernando Salinas.

“You are not going to find US and European architects working in Latin American contexts as you go through the show,” Bergdoll told the audience at the media preview. “This is a show about ideas bubbling up, being explored, being traded among people who are interested one another’s works.”

In “Export,” one of the show’s final sections, “we see Latin American architects operating internationally—having practices in multiple cities, having commissions abroad,” said Bergdoll. “And I think that opens the possibility for a new round of research on the impact of these ideas outside the region.”

Among the works in this section is the Cuba Pavilion for Expo 67 in Montreal by Vittorio Garrati and Sergio Baroni, seen here in the two photographs at center.

For Bergdoll and his team, one of the problems with a broad survey show like this is that “people want to know what the buildings look like now.” To solve that, the curatorial team organized an Instagram feed and put out a call for current images of key works in the exhibition. In Cuba, that list includes the Coppelia ice cream shop; the Escuela Primaria Gustavo Pozo on the Plaza de la Revolución in Havana; the Instituto Superior Politécnico José Antonio Echeverría, CUJAE, Havana; Pabellón Cuba, Havana; and Las Terrazas, Las Terrazas Sierra del Rosario in Pinar del Río.

So far, says Bergdoll, the Instagram feed has received 20,000 images throughout Latin America and the Caribbean. A rotating selection of Instagram images closes the show, projected as a mosaic on a video wall outside the final gallery.