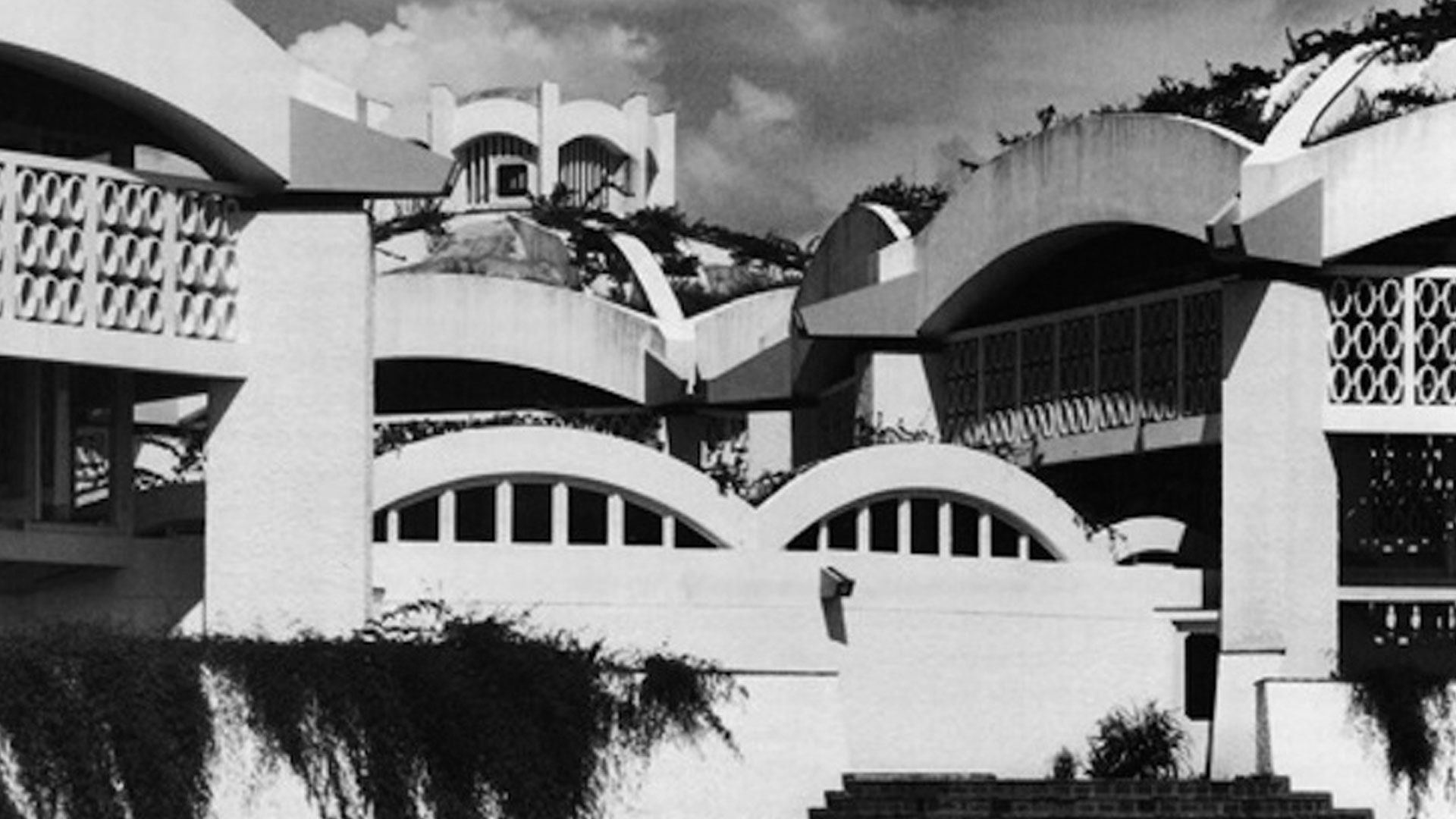 In memory of the architect, who died in December at the age of 89, here’s the second of two excerpts from an interview by Jorge Fernández, done in 2000, that appeared in the Cuban magazine Revolución y Cultura.

The symbol is very powerful in your work; the form does not exist in the same way. How do you handle all significant possibilities in the artistic creation?

For me, the School of Dance is male, macho, in the sense that it’s something epic, triumphant, something glorious, ethical, and explosive. I think the opposition of male and female, good and evil—indeed, the meaning of opposites—is something that is inherent in mankind. There’s a phrase in the fragments of Heraclitus that says, “the name of the bow is life and its work is death.”

There is a constant in the universe, and that’s the union of opposites. This conflict can be found in the Catholic religion, between God and the devil, and between good and evil; in the sense of thesis and antithesis in Hegel´s philosophy; and in the interaction between yin and yang in Chinese culture. Marx, after taking Hegel´s dialectic and building his own philosophical method, speaks of opposites and the struggle of opposites. Janus is the god with two heads, one looking to the past and the other to the future. There’s a key with the name or letter Alpha, and the other side bearing the letter Omega, beginning and end together, unified. And that is an essential problem of human existence: opposites together.

And I have used these ideas in other architectural works I’ve done later. For example, in a school I did in Montreuil, near Paris, I designed the façade as two beasts: a bar becomes a male beast and the other a female beast, as if the male were to cover the female, and in the middle there is a ying and yang reaching the ground. When you enter, there’s a tree of life, and when you go to the back, there’s a scissors. The building becomes a pair of scissors, that is, a symbol of death, the grim reaper cutting life. The tree of life is its opposite, both of them in the same building. In these school buildings it wasn’t so much the sense of opposition that interested me—they simply attempt to affirm life.

In the School of Dance I looked for a sense of exaltation at the entrance—that is, the vaults rising in an exalting manner, as in the Byzantine architecture. Then, when you pass through the central plaza, there’s glass, broken as if from a punch. It’s the symbol of the breakdown of that moment. When I walk through the inner colonnades there’s an agonizing sense, because there are arrows going in all directions which should provoke the anguish that I felt at that romantic moment in the Revolution—the sense of danger that so much energy might stop, or that something bad could happen. Then you enter the dance studios, and the notion of exaltation is reiterated. That is, if you want, there’s more composition. In the other school, the Visual Arts, it’s Eros in the Dance, not Thanatos. I wanted a mystery, for things to be not so clear, in the nature of a jungle–consuming the world because that’s its creative nature.

Please talk a bit about the Visual Arts and Dance buildings in the context of your life at the time.

The 20th century saw many social changes that had no expression in architecture. Russian Constructivism was the gestation of the dynamics of a movement, but it left no buildings behind, except the Soviet pavilion of the Exposition Internationale in Paris. For me, the Revolution was a fundamental problem. That is, I lived profoundly, like two sensations that were in the air. The exaltation I felt when I saw a plaza where a million people could gather in a state of near ecstasy—this I tried to create here [in the School of Visual Arts], to convey an explosion, as if there were some winds from below with a centrifugal, crazy force that pieced the air with domes. I did columns that didn’t go all the way up—I made the tops black, to create the sensation that everything was broken and flying, as in an explosion.

In the other building, the Dance, I brought a sense that when students danced, they could feel that sense of exaltation, could play with the movement of the dance. Because I’ve always believed that architecture means creating a poetic framework for human action, that it’s important to establish a dialectic between what the interior of the building says and the image that one imposes on it. I wanted the sala de la Danza to symbolize excitement. It also had a second aspect: when a dancer performed a grand jete, looking up with the movement of the arm and the body, that the domes themselves would rise up in a crazy way and leap through the air—exploding as if the dancer, using the force of his body in his leap, caused the architecture itself to expand up and out. For example, the wall is on a point, in the interior, and then comes

I wanted the dance hall to symbolize excitement and also had a second aspect, when a dancer performed a grand jete, looking up with the movement produced by his arm and his whole body, so crazy inflated domes and these took over the air, explode as if the dancer, deploying his strength through the jump, would have caused the expulsion of architecture out. For example, the wall is at a point, inside, and then comes a passage of openwork, and then the whole roof appears. This solution, from the architectural point of view, creates the illusion of being caused by the force of the dancing performed there,  and plays with the ambiguity of different meanings.

I would like you to comment on your experiences in Cuba in the founding of the School of Architecture, the latest seminars that you did in CUJAE, and the meetings and new friendships in your country.

I tried to create an urbanism of communication with the students, and their work was superb. The kids here, for me, were a wonderful experience. At first they found difficult to adapt because they were not used to what I was doing. Today, we are trying to get people to focus again on quality. In the past I tried to create a really good school of architecture in Cuba but I could not, I was not allowed to.

How have you reconciled the Western canon and the African canon? How do you live in the center of Paris, being so Cuban, and also have a special affinity for the best of African culture?

Let me explain: when I go back and forth—and I think that’s essential for a creative worker—I integrate myself into the context there. When the artist is in Cuba, the artist is Cuban, and when he’s in China, he’s Chinese. When I’m in Cuba I am Cuban, and when I’m in France, I’m French. When I was building the Center for Art and Communication in Vaduz, Liechtenstein, I was Austrian. If I have to build in Africa I am an African—I did a project for Dabai and I did it in African. And when I have to go to other countries, I join the local context as well—I did that in Spain, Germany, and Iran. I am a very difficult architect to follow because I never do the same thing over again.

Does Cuba remain, in your mind, as the image of a tarantula?

I will now take an image of Paul Klee’s. He said that an artist is like a tree that has its roots in the earth, absorbs sap, passes it through its trunk, and produces branches and leaves. I like this image a lot. All artists live in a world—I lived in this world of the Revolution, and this produced the branches and leaves that is my artwork.

Now, what about me? The earliest memory I have is of my life is as a very small child in a grand colonial house in Camagüey, my hometown, where my family lived. There was a room that had big Baroque cabinets, and I in my short pants would play on the floor with my toys. From behind the cabinet came a tarantula. It walked over my legs to the other side and went on its way. That was a strong image for me, one that produced art—because in my art there is always a tarantula or spider that appears when I make a painting, or at the moment I do a drawing.

For example, I love to draw scorpions. In the School of Dance building, I left a tarantula in the theater; and theater, at its core, is a tarantula. Sure, if you want, it’s a thing of mine, a piece of my inner world that came there. I wsn’t looking to convey something terrible to thestudents—It was my own tarantula I was leaving with them, the tarantula of the child Porro.

I remember someone saying to me—pure comedy: “Why don’t you go to Cuba?” There were years when I didn´t come to Cuba, and I said: Because I would have to demand that the government of Cuba put me, with my short pants, in the same room I was playing in, with the same toys on the floor, and then, from behind the Baroque cabinet there, let the tarantula walk over me again, to close the cycle and end my problem with the tarantula … And of course, the Cuban government cannot give me that. It’s a joke. And then I came.

You first returned in 1996, after thirty years of not being in Cuba. What did you feel when you revisited the schools? How much nostalgia, and how much sorrow?

I cried like crazy. When I entered the buildings, I entered crying. It was a very strong emotion. It was like being reunited with a piece of my own flesh, my arm or my leg, my liver—God knows what part of my body. It was a very emotional encounter, belive me.

And how do you feel now this project is being restored?

If you were to define yourself after so many years, what words would you use?

I would define myself as a man of love. I am a man of love indeed, who loves deeply. I  often feel that I’m not loved, that there are people who do not love me, but that I love them anyway.

Are you satisfied with your life, with your work?

Yes, because I think that life has to be composed in the same way that a work of art is composed. Otherwise, life is not worth living. You have to compose it as Leonardo and Botticelli made a picture. You have to compose it well, to make that life beautiful. Although it can be very tragic, and there can be very hard, very difficult times. But it has to be beautiful. . . And I think my life is not ugly. . .