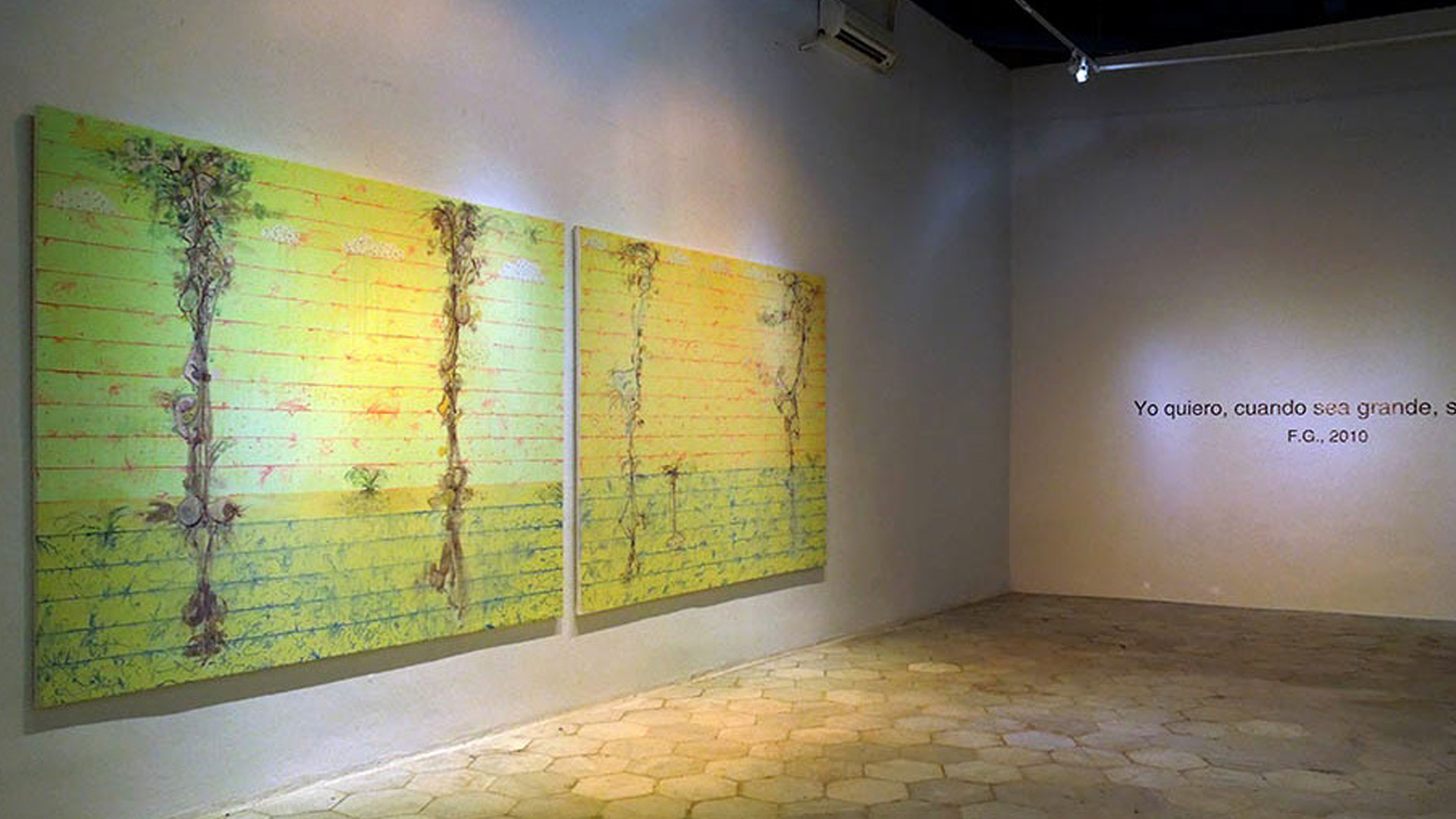 Eduardo Ponjuán at the Museo Nacional. Earlier this fall, Eduardo Ponjuán, winner of the 2013 Cuban National Award in the Visual Arts, opened a solo exhibition, Besame mucho, at the Museo Nacional de Bellas Artes. The exhibition brings together two distinct bodies of work: Unmonumental, a set of installations that reflect the artist’s personal history and his thoughts on art, art history, and the human condition; and Besame mucho, a series of works that address the loss of his mother, who died in spring of last year. The exhibition runs through February 1. Look for a photo walk-through on Cuban Art News in January.

And Saavedra receives the 2014 award tomorrow. Congratulations to Lázaro Saavedra, winner of the 2014 Cuban National Award in the Visual Arts. The award will be presented in a ceremony at the Museo Nacional de Bellas Artes tomorrow, December 17, at 3 p.m.

Flavio Garciandía at the Wifredo Lam Center. This retrospective of the artist’s work since the 1970s bears the whimsical title Quisiera ser Wifredo Lam… (pero no se va a poder) [I’d Like to be Wifredo Lam… (But I’m Not Able to Do It)]—particularly ironic since the show is hosted at the Wifredo Lam Center of Contemporary Art. Curated by Cristina Vives, the exhibiton features some 70 works, including loans from the Museo Nacional, tracing Garciandía’s career from the photorealist works of the early 1970s through abstraction, the Tropicalia series of the late 1980s and early 1990s, to his most recent production. On view through February 6.

Edel Rodríguez at La Casa de las Américas. Rodríguez is an award-winning, Havana-born graphic designer and illustrator who served as art director for Time magazine for over a decade. Now, he’s opened a solo show in the Galería Latinoamericana. The works include Rodríguez’s designs for movie, opera, and Broadway theater posters and ad campaigns, along with original drawings, illustrations, book covers, and more. On view through January 19.

Luis Enrique Camejo at Galería Artis718. In a show that opened this past weekend, Camejo unveiled his first bronze sculptures, made this year in Miami. The show is being presented by a new gallery in Miramar, Artis718, which opened this past summer.

Santiago Rodríguez Olazábal at Galería Habana. Rodríguez Olazábal decided to title his solo show Palabras (Words). “For me, drawing is a way of writing, with an iconography that reveals and expresses the qualities of its own poetic circumstances,” he explained in a statement. “This was the reason I conceived the images that inhabit this project as if they were words.” The show, which opened in early December, runs through January 9.

Roberto Diago at the Biblioteca Pública. In the gallery of the Rubén Martínez Villena Public Library, Diago’s solo show La Piel que habla (The Skin That Talks) runs through next month.

Tomorrow: Light es luz. Just in time for the holidays, this project invites four artists—Alexandre Arrechea, Alejandro González, Lorena Gutiérrez, and Milton Raggi—to light up a street in Vedado, for the (mostly) nighttime enjoyment of residents and passersby. Or as curator Cristina Vives puts it, to “intervene with lights” in the usually darkened streets. It’s the latest in a series of collaborations between the Norwegian embassy in Havana and Estudio Figueroa-Vives. The reception is tomorrow evening, December 17, 7 p.m. at Estudio Figueroa-Vives on Calle 21.

Opening Thursday: Glauber Ballastero: Homostalias Arquea – Appaloosa. At Galería La Acacia, this solo show invites viewers into a different world—specifically, la República Honolástica del Dermis Cromopilato, a fictional space depicted in paintings, resins, drawings, and a video installation. In this realm, Homostalias Arquea is the plant that permits citizens of Ballastero’s republic to attain the state of Appaloosa, in which only pure, essential sensations are experienced. The opening on Thursday, December 18, begins at 7; the show runs through January 16.

Opening Friday: Reynier Leyva Novo: El peso de la Historia. Novo’s latest work takes as its starting point an investigation into the laws that were implemented in the early days of the Revolution, and the modifications they’ve undergone recently. Computer software enabled Novo to calculate the area, volume, and weight of the ink used in those documents; the gallery walls are the surface on which Novo translates this data in artistic terms. El peso de la Historia (The Weight of History) opens this Friday, December 19, at the Galería de Arte Villa Manuela, with a reception at 6 p.m.

Coming Soon: The 8th Havana Charrette. The 2015 Charrette will take place March 15–21, and will focus on the waterfront area of Miramar. For details, click here.

And on to Europe…

Carlos Garaicoa: Orden Inconcluso in Madrid. At the Centro de Arte Dos de Mayo (CA2M), Orden Inconcluso (Unfinished Order) takes an architectural perspective on the artist’s oeuvre. Curator Agustín Pérez Rubio traces a trajectory through works that comment on the large-scale social projects of Cuban architecture, analyze macro-economic structures, and observe the small realities of daily life. On view through March 8. And through January 3, you can catch another Garaicoa show in Spain: Orden Aparente (Poético Político) [Apparent Order (Poetical Political)], curated by Vicente Todolí, at the exhibition space of the Fundación Botín in Santander.

Here’s a quick video look, in Spanish, at Orden Aparente (Poético Politico), including an on-camera moment with Garaicoa.

Elio Rodríguez in Valencia. At Galería Charpa, Elio Rodríguez: Presión contenida (Contained Pressure) is the artist’s first solo show in Valencia. The exhibition presents Rodríguez’s work as a single large installation, rather than works to be read individually. Look for large-scale sculptural works, including inflatables.

Cuban Contemporary Perspectives #1 in Milan. Presenting work by Eduardo Ponján, Lázaro Saavedra, and Tonel, this is the first of four group shows focusing on Cuban art and artists to be presented at Milan’s Galleria Bianconi through March 2016. Organized by Giacomo Zaza, who curated the Cuban Pavilion for last year’s Venice Biennale, the series of exhibitions will also feature work by Liudmila y Nelson, René Peña, Sandra Ramos, and Luis Gárciga, among others. Cuban Contemporary Perspectives #1 runs through January 18.

Los Carpinteros’ Helmet in Germany. The Museum Folkwang in Essen, Germany, has made a point of displaying ancient and non-European works in its collection alongside European avant-garde and contemporary art. With that in mind, the museum invited the duo Los Carpinteros to create a sculptural showcase for the presentation of small objects. The result: Helm/Helmet/Yelmo, 2014, installed at a central point in the permanent collection galleries. Over the next five years, the museum will use the structure to display a rotating selection of works from their archaeology, global arts, and applied arts collections.

Next week: What’s happening in the US, including awards, fellowships, and other news.