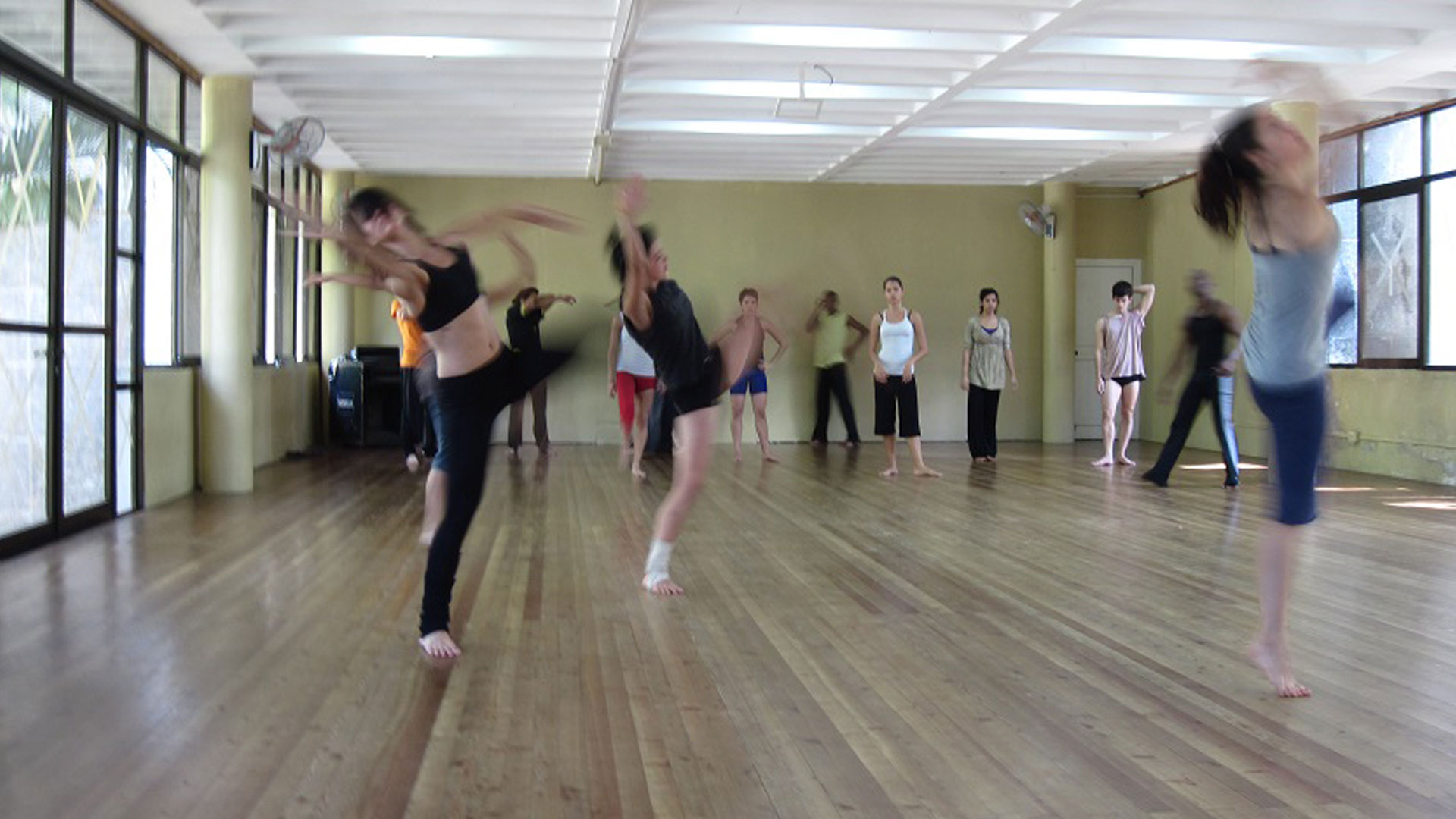 MalPaso, a Havana-based contemporary dance company, had a successful debut in the United States at the Joyce Theater of New York on May 27–June 1, 2014, then moved on to perform in Miami June 4-6. Dancers Osnel Delgado Wamburg and Daileidys Carrazana Gonzalez, both formerly with Cuba’s largest contemporary dance company, Danza Contemporánea de Cuba, founded MalPaso in December 2012. Friends advised them against the move, saying it was a misstep, a mal paso. And yet, less than two years later, the founding duo and seven talented colleagues are performing for international audiences.

Their current program includes a piece of choreography by Delgado in collaboration with MalPaso dancers, 24 horas y un perro (24 hours and a dog, 2013), and a piece created by New York choreographer Ronald K. Brown, Por que sigues (Why You Follow, 2014). In 24 horas y un perro, dancers move through a typical day to the jazz music of Grammy Award-winning Cuban-American composer, Arturo O’Farrill (who performed live with his Afro Latin Jazz Ensemble at the Joyce). Brown’s Por que sigues references the Yoruban god Elegua and is set to recordings of smooth vocals and drum remixes by various musicians. Both works shared a light, festive air without being explicit about the reason for celebration. This vibe encouraged audiences to sit back, relax, and enjoy the panoply of movement before them.

By any standard, these achievements are significant. For a Cuban company, the trajectory is extraordinary. Performance exchanges between the U.S. and Cuba involve logistical challenges and high expenses, and MalPaso operates without governmental funding. That said, the company’s accomplishments can be explained by looking beyond the nine MalPaso dancers to consider the individuals and institutions from both countries that have made their poetic steps and “missteps” possible.

While the National Ballet School in Havana is internationally recognized, the other schools are relatively unknown outside Cuba. The ballet hub in Camagüey grew out of the work of Joaquín Banegas, Sylvia Marichal, and Fernando Alonso, who founded and built the Ballet de Camagüey and its affiliated school, starting in the late 1960s. The Cuban modern dance establishment started with dancer and choreographer Ramiro Guerra, who founded Cuba’s first professional modern dance company in 1959. Guerra combined North American dance techniques with Cuban folkloric traditions to create a unique Cuban modern dance aesthetic.

As Guerra professionalized Cuban modern dance, others focused on its instruction and popularization. In 1961, a campaign to train art instructors began at the Hotels Comodoro and Copacabana in Havana. Under its auspices, dancers affiliated with Alberto Alonso’s experimental dance company (including Luis Trápaga, Sonia Calero, and Cristy Domínguez) and North American dance professionals living in Cuba (such as Lorna Burdsall, Elfrida Mahler, and Waldeen de Valencia, née Falkenstein) worked on a curriculum for teaching Cuban dance. Pedagogic experiments were institutionalized with the Escuela Nacional de Arte founded in 1965 (today the National Dance School in Havana). Elfrida Mahler took modern dance to the eastern part of the island in the 1980s, and two MalPaso dancers came out of the resultant Bayamo scion in 2009. [For more on the history of the Escuela Nacional de Arte, see the excellent documentary, Unfinished Spaces.]

Although experts like scholar Suki John have praised Cuban modern dance for over a decade, international publics are less familiar with the form and its history. Hopefully the varied backgrounds and collective talent of the MalPaso dancers will begin to address this lack of awareness. [For more on Cuban contemporary dance past and present, see Suki John, Contemporary Dance in Cuba: Técnica Cubana as Revolutionary Movement (McFarland, 2012).]

In addition to past dance innovators, there are important contemporary contributors to the MalPaso success, including the Joyce Theater of New York and the Ludwig Foundation of Cuba. Under the leadership of Executive Director Linda Shelton, the Joyce began organizing trips to Cuba as part of their Travel Program in the early 2000s. Through these trips, the Joyce connected with Cuban artists and organizations, including the Ludwig Foundation. Founded in January 1995, the Ludwig promotes the work of young Cuban artists and is one of the few nongovernmental, nonprofit organizations on the island. Fernando Saez, the Ludwig’s Director of the Performing Arts Program, helps to organize performance demonstrations by various Cuban dance companies for Joyce travelers.

The Joyce and the Ludwig also help to bring Cuban dance to the U.S. They worked to ensure that the ¡Sí Cuba! Festival included performances by Danza Contemporánea de Cuba at the Joyce Theater in May 2011. This was the first performance by the company in the U.S. since it was founded in 1959.

Both organizations also promote dance developments on the island through choreographic exchanges, as evidenced by the most recent MalPaso venture. In the spring of 2013, the Joyce sent Ronald K. Brown to Cuba to audition companies for a new work. Brown considered a dozen groups but chose MalPaso, which had been founded with the help of Fernando Saez only a few months earlier. The MalPaso dancers impressed Brown with their maturity, work ethic, and openness. Brown returned to Havana in March 2014 with Arcell Cabuag (Associate Artistic Director and dancer in Brown’s Evidence, a Dance Company), to create a new work in a three-week residency. This coincided with two Joyce trips, ensuring that U.S. supporters sat alongside Cuban audiences at the Havana premiere.

From the audience’s perspective, MalPaso, Brown, the Joyce, and the Ludwig have achieved a great success. But what about for the artists involved? According to the collaborators in the post-performance Dance Talk at the Joyce on Wednesday, May 28, the experience has led to collective growth. Discovery has come through allowing individual rhythms to synergize in spite of different languages, life experiences, and backgrounds. This points to the power of cross-border collaborations, particularly in dance, as bodies learn from each other while moving expressively through common spaces.

A brief look at the figures and networks behind MalPaso’s performance illustrates the caliber of the Cuban dance establishment and the significance of international linkages for its continued growth. The story of MalPaso demonstrates how mobility, both across borders and on stage, can defy artistic and political stasis. With steps and missteps, MalPaso and their collaborators move forward, propelling dancers and audiences from Cuba and the U.S. in the right direction.