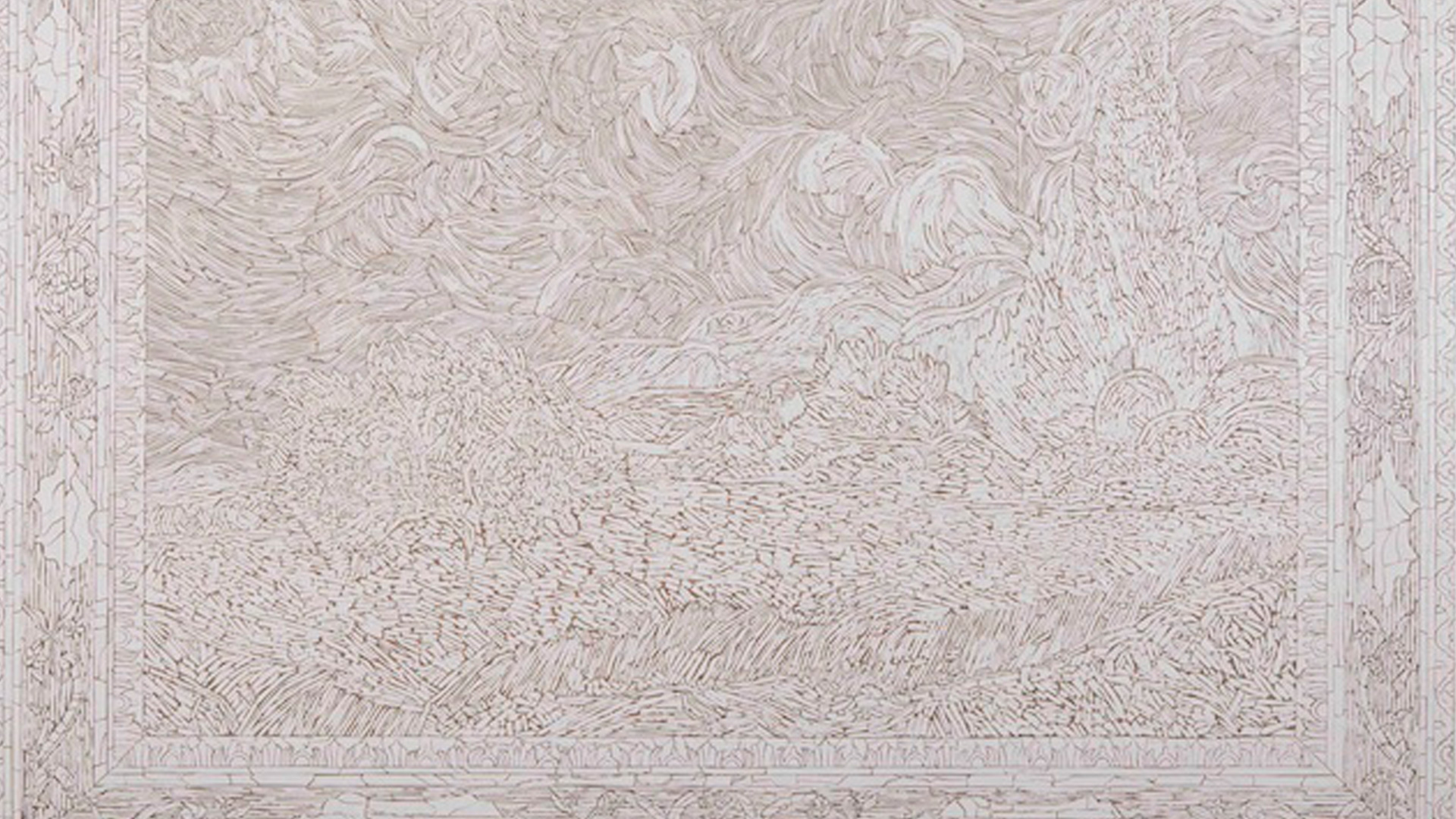 On March 8, the solo show Pavel Acosta: Stolen from the Met opened at Zadok Gallery in Miami’s Wynwood art district. At the same time, the artist’s work has also been included in the group show Romance, curated by Peter Menéndez, presented this month at the Under the Bridge project space in North Miami. (That show closes on March 29, with the closing reception on Friday, March 28.) And an Acosta piece will be part of the upcoming exhibition Caribbean: Crossroads of the World, opening April 18 at the Pérez Art Museum Miami downtown.

Stolen from the Met was curated by noted art historian Bernice Steinbaum, while the catalogue essay was written by art historian and curator Elvis Fuentes.

Stolen from the Met should be understood as an installation, comprised of six works that take, as their starting point, classic works of Western art history by Diego Velázquez, El Greco, Jean Baptiste Greuze, Johannes Vermeer, Pablo Picasso, and Vincent van Gogh. The show’s most immediate antecedent is Wallscape, Acosta’s contribution to the 2013 Bienal at New York’s El Museo del Barrio.

The technique of creating collages from dried paint has obsessed the artist for years. In a sort of urban archeology, his series Stolen Paintings, presented in Havana in 2008, extracted fragments of paint from deteriorating buildings and old cars, which the artist used as the raw material for his collages. Although in this series the dominant theme was the lack of resources and the black market, it also focused on memory and a certain surreptitiousness, which has undoubtedly been an integral part of the series since the artist’s arrival in the United States.

Stolen from…  is an open series, with a direct relationship to art history and several concepts associated with it, such as the original and its aura, arts education, and the increasing elitism of art spaces, among others.

In a sort of secret obsession utilizing segments of walls, Acosta begins with a process of destruction, which should be understood as a rigorous scrutiny of art history and Western culture. With the paint scraped from the wall, the artist recreates works that he has observed for years in catalogue reproductions, in a patient act of reification and discovery. The use of the color white is vital in the series’ conceptual approach, as is the careful installation of the artworks, which, suspended from the ceiling, lay bare the entire structure.

“Pavel has an encyclopedic eye,” explains Steinbaum. “He has such a deep knowledge of art history, and at the same time, the technique behind it—how an artwork is constructed. When we look at a painting, we look at the colors. We cannot avoid it. Pavel makes us to think about other things. He makes us rethink, in a way that we were not aware of, the original painting—the way things move, the brushstrokes.”

Once the works are completed, the fragments of wall suspended in space coexist in an essential dialogic relationship that questions the “white cube” gallery space and  the sacred notions long associated with the artifacts of the artistic process. Even at first glance, it’s evident that each work is inseparable from the fragment of wall on which it was created—the source of the scraped paint from which it was made. It’s as if the artist were interested in giving us access beyond the formal “show,” extending our view to the backdrop as well, as the only way to guarantee an effective reading of art history. On the floor below each piece, a QR code gives access, through a mobile device, to a digital image of the original painting on the Metropolitan Museum of Art website.

Steinbaum explains: “The reason that Pavel cuts [the section] off the wall is because he wants us to know that he is not really copying these paintings. These are the ghost images of what stays on the wall after the painting is removed. That is why the way these pieces are installed is so important.”

The show’s title implies other levels of interpretation as well. On one hand, it refers to the appropriation process underpinning the series; on the other, it questions the process of “rarification” that underlies art collecting and museums, which at the very least removes the artwork or artifact from its original context.

In the Caribbean: Crossroads exhibition opening next month at PAMM, Pavel Acosta will present La Jungla (The Jungle), an appropriation of Wifredo Lam’s famed painting of the same name. It’s part of the series that the artist is currently working on: Stolen from MoMA.

Pavel Acosta: Stolen from the Met runs through April 24 at Zadok Gallery, Miami.