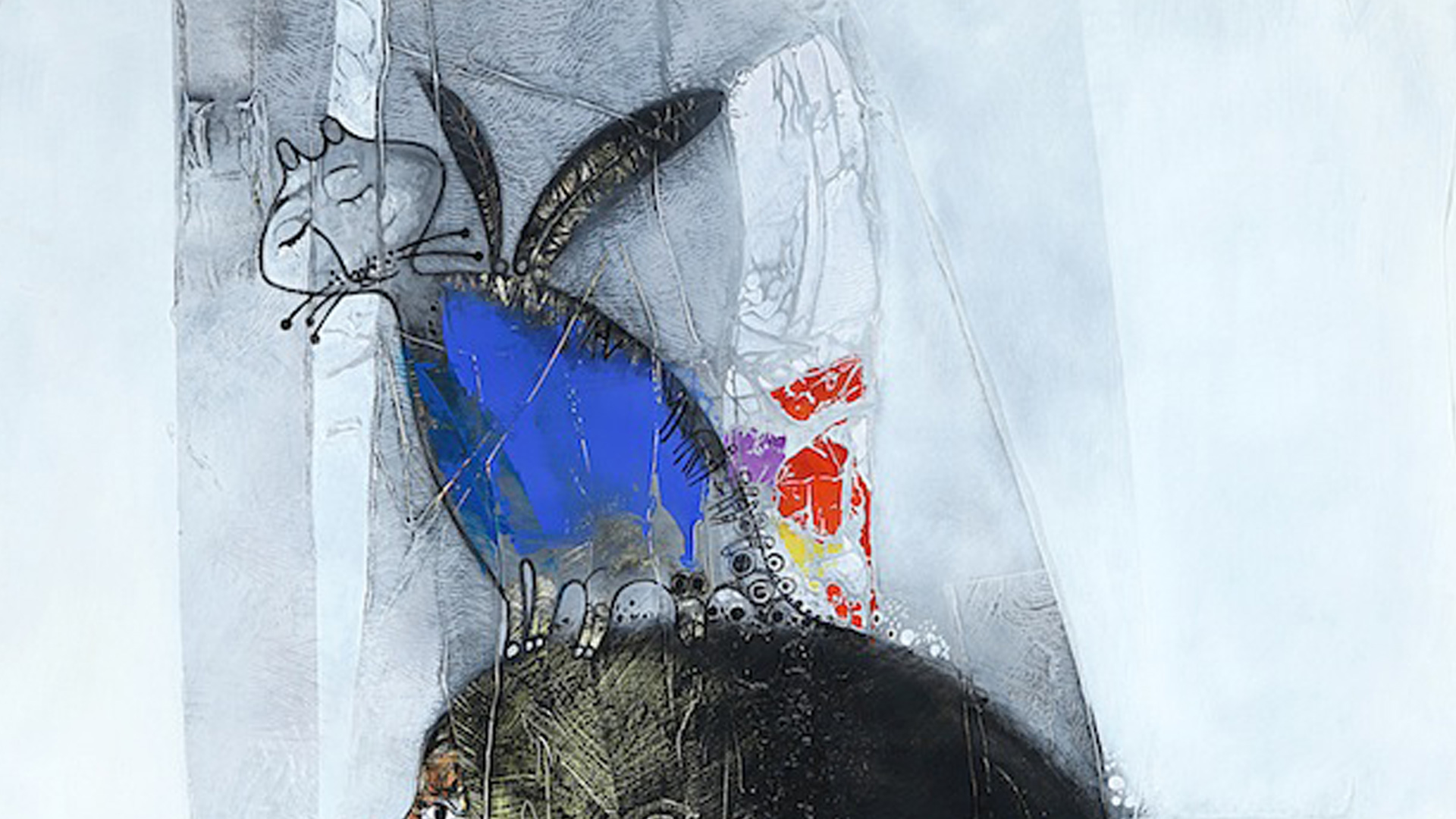 From the beginning, your work has unfolded like a fable across the pictorial universe, in paintings permeated by a sense of anecdote, with imaginary characters that embody a history with a touch of humor, and with a marked moral character.

From the start of my career, I have tried, unintentionally, to record my life, my times, and the society that surrounds me—the world I live in, with its contradictions, its joys, its sorrows. All of my work is a big fable, or small fables that are intermingled in this grand fable which is the Cuban reality.

Your creativity is a breath that has enlivened Cuban art: the passion and sensitivity attuned to the everyday. How do you conceive the creative act?

Creating is a great mystery—even for the creator, who finds out; at the end, how the thread of a connection has been realized in the work. I make a lot of sketches, I process the work over and over, but I also give it leeway: I’m freer, more spontaneous. Eventually, these works will be part of a larger work.

For more serious works, which are always larger, I have a process of study, design, sketching the composition, researching the image. It’s a detailed process.

Which artists do you feel a kinship with?

I have to admit that I’m not inspired by one single artist. Behind me there are so many influential people. Among Cuban artists are certainly Antonia Eiriz (1929–1995), and Eduardo Abela (1889–1965). Also Marc Chagall, and most recently Gustav Klimt and all the Symbolists.

But it’s a spontaneous process. I don’t deliberately go in search of cubanía. It’s something in the artist´s body and blood. I belong to a generation graduated in the 1970s, along with Nelson Domínguez, Flora Fong, and Eduardo Roca (Choco), for whom it was a theoretical objective to maintain, within the artistic expression, a certain tradition of what we call cubanía.

Nelson Domínguez was heavily influenced by Wifredo Lam. Eduardo Abela was a strong influence on my work, and still is. And of course, all the Cuban humorists, and the inevitable presence of that marvelous woman, Antonia Eiríz.

Unlike Flora Fong or Zaída del Río, whose work reflects the pleasure they take in color, I was more focused on showing a critical perspective on society within cubanía. I moved toward a critical analysis of society within the experience of Cuban society.

The world of childhood is like a magnificent bridge that opens to imaginary worlds in your paintings, taking us back to a transfiguring look at Cuban reality with its enchantments and deliriums. It’s a world of daydreams that seems to be emphasized by the tendency of your characters to close their eyes.

You’re asking why I close the eyes of my characters. I wish I knew! I think they take on a sensation of tenderness. When we meet someone, we’re accustomed to looking into their eyes. I try to avoid spectators becoming trapped by the eyes of the characters, pushing them to navigate the context. The eyes are very distracting.

In the end, I drag in a childhood that comes from I don’t know where. Or yes, perhaps it comes from my father´s death when I was six. Perhaps it’s my unconscious wish to remain there, trapped in that moment of childhood. Perhaps it’s an escape. Maybe I’m running away. I don’t know. I’ve never left childhood, which is lovely.

You mentioned Antonia Eiríz. Like her, you’ve devoted yourself to spreading culture through the community. Tell us a little about your casa-taller, your home workshop.

From the beginning I was conscious of the need for a different space culturally speaking. I know about the many limitations of students and visual artists, and their need for a much wider knowledge of the art world. So I decided to have, as they say, a house of independent culture.

There was no problem starting a home workshop. I tried to create a place where artists could think freely and have access to free information, with no limitation or censorship.

However, I realized artists don´t live only on visual information, but on philosophy, literature and other expressions of human beings that are not closely related to the visual image, and then a problem started. We had different kinds of literature, some of them censured by the government—for example, the work of Cabrera Infante or Zoe Valdes, as they had decided to live abroad, or Heberto Padilla´s.

I was interested in encouraging people in the province think in a different ways, to see multiple routes and not just one road. This idea was not accepted; so we were questioned, very much questioned.

The house had a very good cinema space. There was no cultural space in Pinar del Rio. I was not told to close it, but I was told that “the cultural space is no longer playing the role it was opened for,” and that implied its closure. I regret it very much, because it was a space of cultural dissemination for the province. I was very sorry.

There is an interesting duality in your work: the hero and the antihero. Often your characters are like the classic Greek hero, a victim of circumstances that overtake him, limited by his human condition.

The human being needs to see the ordinary man, the man who kisses, who walks with his children holding them by the hand. This human dimension also allows us to understand the error in so much of human nature.

There is another figure often present in my work: José Martí. Painting Martí was an obsession for me: a sort of inherited historical debt. [Oliva’s grandfather, who had been enlisted in the Spanish army, was directly involved in Martí’s death in Dos Ríos.] I felt I had a history of gratitude to this unique figure in the history of the country. A poet, a patriot, an impassioned human being.

The joke is this bittersweet Cuban trait of scoffing at the most adverse circumstances. One of the most typical traits of contemporary culture on a global level is the sense of dystopia: the lack of belief in achieving utopia. It’s a contemporary disenchantment that is very present in your work, blended, however, with a profound humanist sensibility.

Disenchantment seems to be a contemporary sign of the times. In my works I feel that even when there is crisis, there is a profound confidence and humanism. If that weren’t so, we’d have to kill ourselves. Remember that hope is the future. Human beings are always going to struggle to live better, both in spiritual and material terms.

After the conflicts in Pinar del Rio, a character named Utopito appeared in my work. The very incarnation of utopia, but at the same time disenchantment. Utopito lives a very great contradiction. It’s the contradiction in which the Cuban people have lived, with plans today that later fail. Then others are put forth and again fail.

Utopito is a dreamer, He’s a pinareño, a Cuban full of contradictions, who believes in the society one moment, in the social design, but other times doesn’t believe. He is filled with contradictions, he jokes, suffers, ridicules. He is a personage very similar to the Salomón of Chago [Santiago Armada] or Abela’s Bobo. He is the character that is today the center of my artistic universe.

I tend to separate things. Here, for example [pointing to works in the Latin Art Core´s exhibition], these works are part of a series I call pequeñas cosas (small things). They show faces of women I loved so much. But, the center of my work is Utopito, who is contradictory, hopeful at times, but dark—most of the works in the series are dark.

Now I’m finishing up the Utopito exhibition. The idea is to first present it in Pinar del Río, if I can. Later, I’d like to show it Havana, then here [in Miami]. We’ll see. Utopito is a little irreverent—thanks to Antonia. We’ll see what the future holds for Utopito. Let’s hope we can do it all, because, as you know, it depends on many things, including the visa.

Pedro Pablo has left a work in progress in order to give us this interview and now he rushes off to return to the studio. In the doorway of the gallery, he turns one last time and tells me: “One last thing, muchacha. Don’t lose tenderness.”