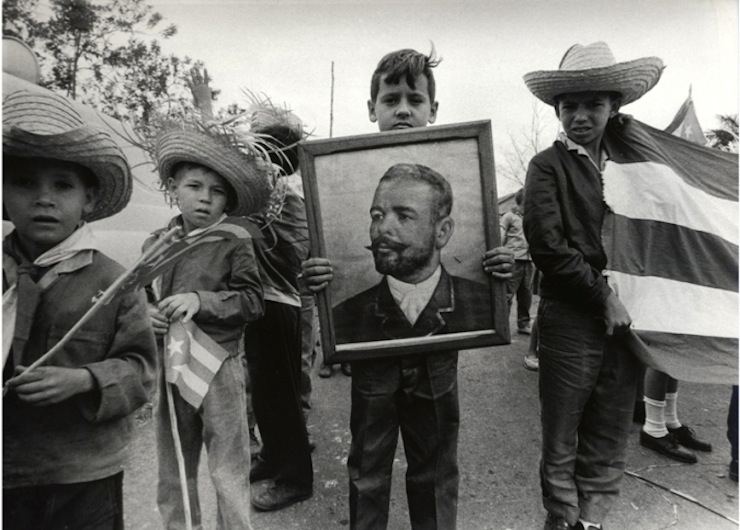 This Saturday, January 18, the Cuban American Phototheque Foundation in Miami opens Iván Cañas: A Retrospective, a career survey of the renowned photojournalist. To mark the occasion, here’s an essay by photography scholar Grethel Morell Otero and curator Abelardo Mena on one of Cañas’s major projects: the long out-of-print photo book, El cubano se ofrece (The Cuban is Offered).

In Cuba, 1969 had been baptized as the “Year of the Decisive Effort.” It was the final step in the “10-Million Ton Sugarcane Harvest,” which would break all sugar production records in Cuban history, according to the plans devised by the political leaders. Its revenues would launch the island into the orbit of the developed world. It was a trial by fire for Cuba’s economy and political capacity.

As a response to Fidel´s call, repeating the slogan “The Ten-Million Sugar Harvest Moves Ahead,” Cubans plunged into the humid environment of the sugar cane plantations. Cold nights and early mornings were lit by rustic kerosene lamps, so as not to stop the cutting of the legendary machetes. Breaks were short. Cutters hurriedly ate their meals (canned “Russian meat,” root vegetables, beans) standing in the cane fields, then fell into exhausted slumber on jute-sack hammocks. That year, gaining a “skilled worker” title and a permanent job were the most important goals. Cubans´ utopianism and moral voluntarism made such a feat of unflagging labor possible.

For some renowned journalists, 1969 was “the longest year.” For meteorologists, on the other hand, it produced record-low temperatures. Cities were quiet: bars and cabarets had been closed since March 1968, thanks to the “Revolutionary Offensive;” Christmas holidays and the festivities of December 31st were celebrated in the cane fields. The sugar cane harvest was the war front; all of other activities were on hold.

Iván Cañas, a young journalist from Cuba Internacional magazine (founded in 1962), traveled to Caibarién town, which is 305 kilometers (approximately 190 miles) far from Havana, in the northern part of Las Villas. He carried a Leica M-2 camera with Sumicron 35mm lens and was accompanied by journalist Félix Contreras. Amid the intensity of the harvest, they were assigned to report on the conditions of that labor force—cane cutters, fishermen, farmers, and former industrialists. “I was struck by the atmosphere of such people,” said Iván. “I wanted to bear witness to something that had certain limits—that is to say, a people, a city, an era—and at the same time reflect on our character, our personality as Cubans…”

In February 1970, Cuba magazine (successor to INRA magazine, founded by Fidel Castro in 1959) published an article by Cañas and Contreras under the title “Caibarién.” Like a photo essay, the article sought to integrate Contreras´ enthusiastic text and those Cañas´s eight full-page images. Gloomy black-and-white photos depicted improvised, “spontaneous” environments and people who were more focused on their own activities than on the official harvest projections or speeches. Despite the characters and poses there was no display of smiles, common in the official press, but rather a bottled-up sense of strain.

A new realist photography was born—a departure from the crowds in La Plaza de la Revolución, the heroic rallies and portraits of charismatic leaders in olive-drab uniforms, the themes of “epic” images by photographers such as Korda, Salas, Corrales, Fernández, Mayito, and Noval, many of them published in the newspaper Revolución. Too, it was a departure from the literature de los años duros (of the harsh years), written in the 1960s by Heras León, Fuentes, and Jesús Díaz.

But those published images were merely the tip of the iceberg. By his own count Cañas made four trips to Caibarién that year, traveling on old buses from Havana. He carried an Exakta camera with a 21mm lens, made in the German Democratic Republic (GDR). He used it to record the everyday lives of a town that—like García Marquez’s Macondo in One Hundred Years of Solitude—seemed to be floating above History.

With more than 200 4 x 6 photos and countless contact sheets, Cañas asked Raúl Martinez for advice. Martínez (Ciego de Ávila 1927- Havana 1995) was the most important Cuban Pop Art painter, book designer, and master of generations. So it was that the initial draft of El cubano se ofrece, a manifesto of the generation of Cuban photojournalists of the 1970s, came from four hands. In the photos selected by Cañas and Martínez, Cubans were not shy in front of the camera. They faced the camera, head on, and let the photographer do his job.

Overtly influenced by Robert Frank and the best U.S. documentary photography, Cañas and Martínez designed one of the first auteur books of Cuban photography. Martínez presented a maquette of the initial draft to the Cuban Book Institute director’s office. After an enthusiastic initial reception came the rejection: the proposed photo-essay was considered a “pessimistic, nostalgic and defeatist vision” of Cubans.

In August, 1970, on TV, Fidel acknowledged the failure of the sugar cane harvest and proclaimed a new slogan “Turning setbacks into victory.” He invited his fellow countrymen to a carnival, which to this day remains unforgettable. Photographic images, however, could not convey so much as a trace of ambiguity. The project of El Cubano se ofrece would be postponed for more than a decade.

The year 1981 was a fortunate and defining moment for Cuban art. The concept introduced ten years earlier during the First Congress of Education and Culture, “Art, a weapon of the Revolution,” was still often used by extremely orthodox officials. But an exhibition held that year, Volumen Uno (Volume One), would shake the institution of art on the island down to its foundation, paving the way for a “new Cuban art:” rambunctious, irreverent, experimental.

That year, in Galería L—an exhibition space at the Universidad de La Habana—Cañas opened the exhibition El Cubano se Ofrece, with a selection of images taken in Caibarién. Cañas’s friend, Cuban writer Reynaldo González, delivered a presentation speech at the opening. A year later (1982), the Ediciones Unión publishing house, part of the National Union of Cuban Writers and Artists (UNEAC), finally released El cubano se ofrece as part of the Cuadernos de Fotografía collection. The book was designed by Raúl Martínez and Héctor Villaverde, with a preface by Reynaldo González, who was a witness and victim of one of the darkest periods of the Cuban culture.

The images did not closely follow the design of the original 1969 book, with its open realism,  candid poses, and unflinching assessment of Cubans clinging to their traditions, to their everyday efforts to survive,  a (bitter?) smile ready to bloom across their faces. However, the introduction of a happier, more optimistic element, with photos taken by Cañas at other times, made it possible to publish the work that had been rejected so many years before. Thanks to this, the photo essay was more balanced in terms of narration, yet more profuse, ambiguous, and dilated than its original.

Currently, the book El cubano se ofrece is an odd item that can be found occasionally online. It has never been republished, either on the island or abroad. And with only one exception (Morell 2008), recent research in Cuban photography does not mention this work—as if it belongs to a Cuba that no one cares to remember, on the island or abroad.

So when the curators of Photography-Cuba produced the exhibition La mirada perdida, Cuba 1970-1984 (The Lost Gaze, Cuba 1970-1984), which included this series as a part of the unknown or forgotten documentary photography of that era, they intended to rediscover the meaning of El cubano se ofrece in the photographic tradition of the island. From this the idea emerged of creating (with the photographer’s decisive and generous participation), a portfolio of Cañas’s images of the Caibarién of that time, which is history now.

Apart from valuable documentary testimony, these six selected images convey a sense of that era, a way of being Cuban, caught in black-and-white images by an artist whose compositional eye owes a debt to the tradition of photojournalism. La clase obrera (The Working Class) is Cañas’s most popular work, an almost iconic representation: although a bit unfocused, it was published as a full-page image in an article published in Cuba Internacional in February 1970. It was on the cover of the exhibition catalogue of 1981, in the 1982 book, and appeared in the credits of a film by noted French filmmaker Chris Marker.

Under the title Obreros (Workers), this image was taken in 1977 at the Cubana de Acero Steel Factory for an article published in Cuba Internacional. Although this image depicts workers at their jobs, from a realistic standpoint and with a frontal gaze to the camera, it was not included in the book. The portfolio editors have now brought it back to claim its place and historical context.

Carros fúnebres (Funeral Cars) is one of the most visually solid works in Cañas’s extensive oeuvre, combining an incisive use of lighting with a sharp sense of humor. It was taken in Caibarién in 1969 and was included in the opening pages of the book. Viejo Almacén (Old Warehouse) shows a decayed building with the name of the town near the top. It is a symbolic, graphic image about Caibarién and its people, at the time a prosperous town full of markets, fishermen, sugar cane fields, steam locomotive, and industries, now a shadow of its past glories.