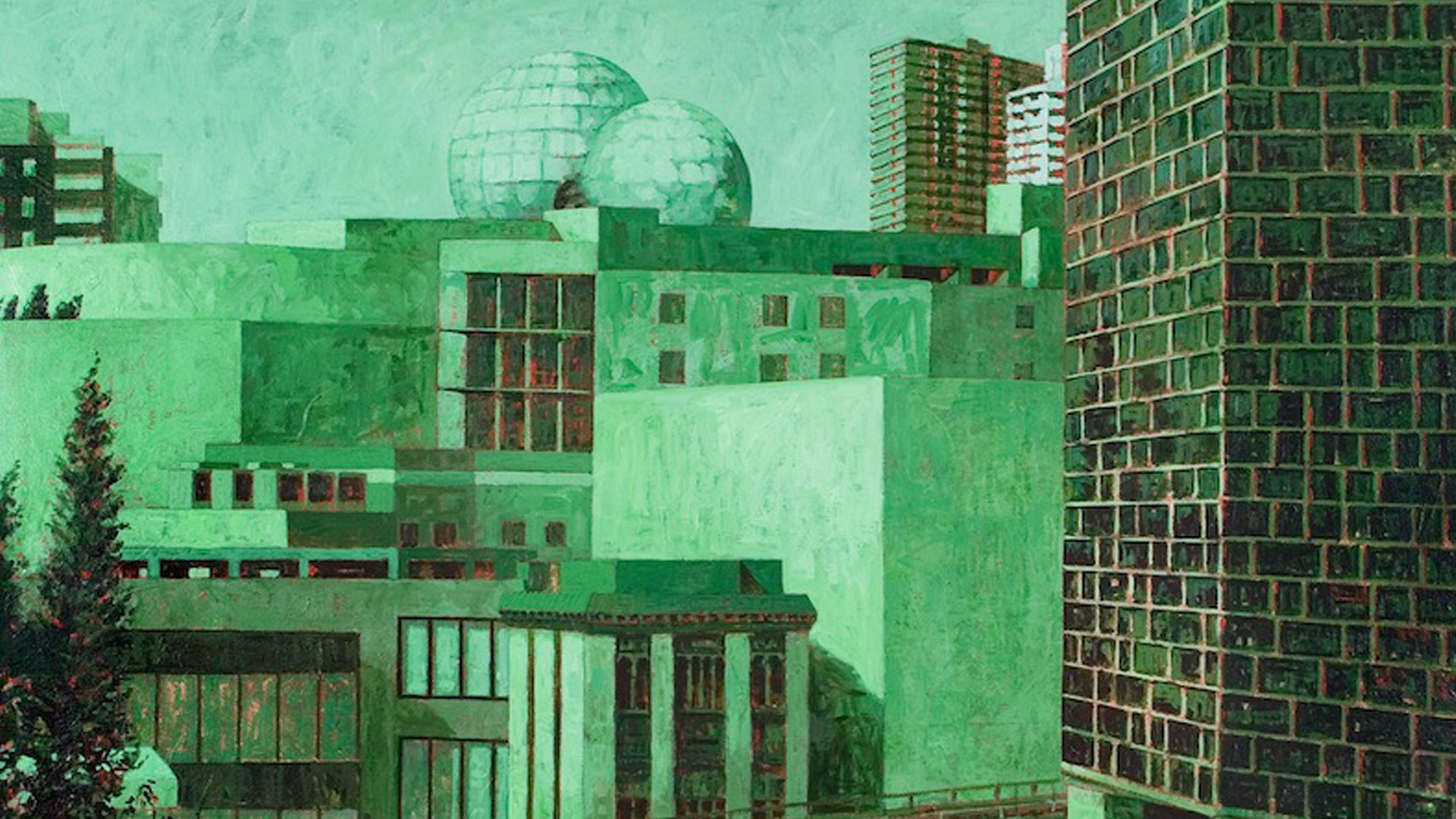 Gustavo Acosta (Havana, 1958) is one of the strongest exponents of Latin American pictorial neofiguration since the end of the last century. His first works emerged within what’s known in Cuba as the Eighties Generation. It was that generation whose artistic intelligence flourished in a “honeymoon” with the utopian project of the Revolution, followed by profound disillusionment. After the fall of the Berlin Wall in 1989 and the hardships of the so-called Special Period, many artists left the country, becoming part of the socio-cultural phenomenon of “diaspora” boldly described by Iván de la Nuez.

The exhibition Espaço do Silêncio (Space of Silence), which recently closed at the splendid Caixa Económica Federal in Rio de Janeiro, has two important characteristics: it´s Gustavo Acosta´s latest exhibition, and it’s the broadest, richest, and most contradictory retrospective of the artist´s work presented to date. Curated by Rodolfo de Althayde, its impressive trilingual Portuguese – Spanish – English catalogue documents the more than 60 works that comprise the show. Surveying over three decades of work, the show offers an insightful perspective on one of the most interesting sensibilities at work in the contemporary Latin American art scene.

Recently, Acosta spoke with Dennys Matos about his career, the evolution of his art, and Espaço do Silêncio.

How do you fit into what´s now known as the Eighties Generation?

In the first exhibitions I took part in during the 1980s—salons, group shows of the collective 4×4, and my first solo show—I usually presented drawings on paper. I introduced myself as a draughtsman and was labeled and rewarded as such for some time. Some of these 1982 drawings are now on display in Rio de Janeiro.

Why did you choose to draw in that particular style?

I think this had to do with a way of understanding art from different angles with respect to the generation before us.

The art of the 1970s was characterized by a virtuosity of execution, an obsession with what we called the artistic “kitchen,” and above all, a thematic direction from which we had no alternative but to distance ourselves. That’s one side. On the other, I was interested in talking about my country and its history, but not from the positivista-épico (positivist-epic) perspective of the generation born after 1959.

Why is that approach positivist?

Because we were shown a schematic Cuban history, divided between a before and after the Revolution. That is, a bad “before” and a good “after.” And the history at the time was presented as a kind of nebulous good fortune, sweetened and positivist. Up to that point, all efforts to impose Socialist Realism had been in vain, but art “within the revolution“ almost always depicted a positive, affirming reality.

I was interested in working with Cuban visual history in another way—a way that was inspired by the work of the American conceptualist artist Roger Welch, who exhibited in Cuba in 1981. He made sculptures and installations, but also drawings and fabrics based on photographic documentation, manipulating and working on them directly. The images were from rural areas of the U.S. Midwest, and they captured the transition and conflicts of American agricultural society in its transition to a purely industrial culture.

That fascinated me. But at the time photography was for me inaccessible, in economic terms and in any practical sense. But I could draw from photos. I stuck to my idea of studying and sharing the real history, the history that doesn’t have medals and isn’t in books. So I started drawing towns, municipalities, cities, buildings, spaces, and streets. I discovered and incorporated them into the personal record of an unknown nation. Those drawings were made a bit like a documentary photo shoot, with a narrative component that was almost like a chronicle—a photo series by someone traveling through the interior of the country and wanting to give visual testimony of what he’s seen. Those drawings identify me, and gave me the chance to be part of the 1980s art scene.

The exhibition in Rio de Janeiro is like a retrospective, surveying more than 30 years of work. How would you describe that creative trajectory?

I’ve done other large projects with the Pan-American Art Projects gallery in Miami, but they’re more focused on specific periods and ideas. But there are two important antecedents to this retrospective in Rio. One of them happened in 2006 at the Nina Menocal Gallery: an ambitious exhibition that coherently surveyed my previous work. The other was not as extensive but it was still a comprehensive exhibition: Siete Tardes (1999, MUCI gallery) in Caracas, Venezuela. This gallery had collected my works from different eras. And it exhibited this collection, comprised of works I had never seen all together. A very interesting dialogue was established, because it presented different approaches over time to a topic I had addressed repeatedly. For the first time, I was an spectator of my own work.

How does this exhibition in Rio differ from those mentioned above?

In the first group of works of those years—many of them included in these shows—there was somehow a cognitive interest. While representing the locations and working with the visual history of my country and city, I felt a need to empathize with it. In general, I was someone who avoided all nationalist sentiment, the virile or viral recognition of lo nacional. The problems we had in our country, the problems affecting our culture, made us look much farther afield.

When my work began to be recognized, I tried to discover, to re-encounter, what was significant in that sense of lo national, and make peace with it. I told myself, “This is what it interests me to talk about.” For a long time, I made works that allowed me, like a magic mirror, to see  and recognize myself. That would occupy the first eight years of my career.

After saturating myself with it, I got tired of referential visual communication, of using photography as a source. I started working on a piece that was perhaps more symbolic. What unfolded was a universe more linked to expressionism and symbolism, a more analytical approach not only to images but to the concepts of my work.

Did you consciously avoid references to Cuba?

Yes, I stopped talking about Cuba specifically and started using a far more universal language in my works, as a defense mechanism. We won´t talk about censorship, but there was an element of coercion toward art production coming from the state and from art institutions. And though I was never an artist who demonstrated obvious opposition to the government, in those years any image was likely to be interpreted as critical of the state. Including a Cuban flag in a work was alarming; a carton of eggs was already an open challenge. The use of “national symbols“ in art was banned. And pictures of my work were not positivist; they were never optimistic about the reality in which we lived. In the Rio exhibition, this period is well represented. In 1991 I left Cuba indefinitely—first to Mexico, then to Spain, and then my sojourn in the U.S.

How do you see your sojourn in the U.S.?

Going to the United States, to Miami, made a difference with respect to what I had been doing before. Someone told me, “Since you came to Miami your paintings have become more beautiful, you are no longer furious.“ Certainly it was a more reflective moment. A moment in which I decided to incorporate a complicated duality into my work: Cuba and outside Cuba.

To this point, my time in Mexico and Spain hadn’t left a mark—it had no great significance, because I continued painting as if I were still on the island. When I got to Miami this changed, as I began to establish critical dialogues between the two realities. Even when I paint, for example, images of Havana, I paint them from a distanced viewpoint. It’s like when you look at one place but realize that you are in another.

Paradoxically, when the subject is Miami, I cannot yield to the temptation to look with eye of a newly arrived immigrant who doesn’t belong there yet.

Does the Rio exhibition convey those changes?

Completely. Here, I could see the evolutionary cycle of 30 years—a sort of timeline. Previously, my painting was scenic, violent, almost structured, trying to plunge the viewer into a universe he had to accept, like it or not. The visual impact of the work was more important than the way it was made.

At some point I started to paint, not draw with paint. I began to enjoy the details of the process more, the addiction to painting—and that’s a topic in itself. In my latest works the point of view has changed: the eye viewing the scene has risen, playing at being God, sometimes violating the vanishing points and horizons. This creates a distortion of the traditional representation: I’m not playing according to the rules. The painter wants to be a photographer, a filmmaker, or a crazy comic-book illustrator. What’s interesting is that 30 years ago, I was trying to do the same thing.

[For more views of the exhibition, visit the Cuban Art News Facebook page.]