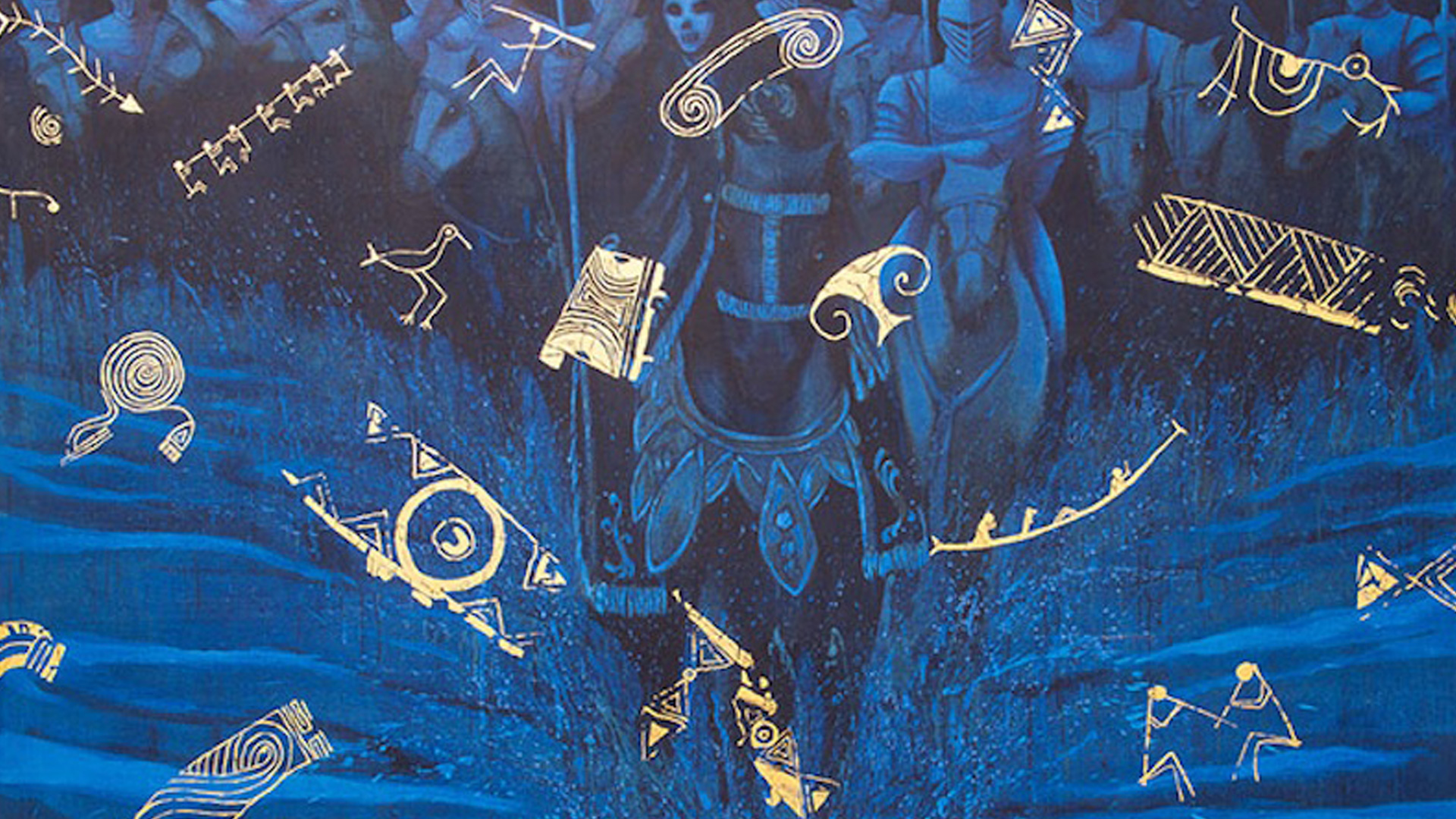 Earlier this month, Humberto Castro: Tracing Antilles opened at the Frost Art Museum in Miami. Here’s a photo walk-through of the show, accompanied by excerpts from the catalogue essay by curator Ana Estrada and the artist’s statement by Castro.

From the essay by Estrada:

Tracing Antilles is an ongoing project produced by multimedia artist Humberto Castro. Based on a series of historical and visual explorations of the islands of the Antilles, the exhibition investigates the evolution of culture in this highly complex region. The work does not aspire to be a chronological account of historical events, but seeks to explore impressions, or traces, of collective experience that still influence the Caribbean psyche and artistic expression today.

. . . In the opening installation entitled Tracing Antilles, from which the exhibition takes its name, the canoe emerges as the key symbol of movement and refuge. The history of the Caribbean begins with the canoa and the migration of peoples through the rivers and coasts of South America. With the movement of these wooden canoes and paddles carved from the trunks of large trees, the islands were populated.

Later in the exhibition, the installation Escape represents the evolution of the canoe, a vehicle originally used in the transportation of people, transformed into an oar-driven piano representing the global movement of Caribbean culture and art.

Most of what we know of the pre-Hispanic cultures comes to us by way of the sixteenth-century Spanish chroniclers, such as Fray Bartolomé de Las Casas (1474-1566). Deeply moved by the tragic incidents of abuse recounted in Las Casas’ The Devastation of the Indies: A Brief Account, a document presented to Emperor Charles V in an effort to put an end to the atrocities committed against the indigenous people, Castro depicts various accounts of human resistance . . . The installation Deconstruction/Reconstructionreveals that through the rubble of a near extermination of indigenous cultures on the islands, the artifacts of a lost ideology arise and still engage us with their beauty and mystery. Among the ceramic shards and stone fragments, objects of power related to the shamanic practices of the Taíno remain whole and untouched by time.

The colonizers’ insatiable thirst for gold and wealth continues to be reflected in the years of struggle and political turmoil the islands have endured through the centuries. In El Dorado (Plate 34), the artist presents the Conquistador as an archetypal force that endlessly haunts the Caribbean imagination. Behind the gleaming surface of indigenous symbology emerges a ghost-like convoy of medieval conquerors arriving on the shores of Hispaniola. In Castro’s visual language, the Conquistador represents a ruthless energy of brutality driven by a hunger for power and domination, a force that continues to express itself in the Caribbean’s legacy of dictatorship.

. . . Although the imagery presented in Humberto Castro’s Tracing Antilles may not always be hopeful, it is honest. Throughout the work, the common themes of chaos and metamorphosis emerge, processes of change that may be painful and uncomfortable to consider, yet always open to the possibility of transcendence. We leave the exhibition more educated about our collective human history and more aware of what the consequences may be to the choices we make today as a society.

From the artist’s statement by Humberto Castro:

The exhibition at the Frost Art Museum is an introduction to my project and forms the base from which future exhibitions will proceed. Major themes consist of the migration of pre-Hispanic populations from diverse points of the continent towards the islands, forming their first communities before the arrival of European cultures. Other issues such as the extermination and destruction of cultures during the colonial era, as well as the reconstruction of others, reveal cultural and religious syncretism, inevitable dictatorial policies and political chaos. Unfortunately, I have found that the story does not change. History continues to repeat itself in many different forms, but on this journey, we will be curious to ask ourselves what these islands would be if there had never been any contact with Europe.