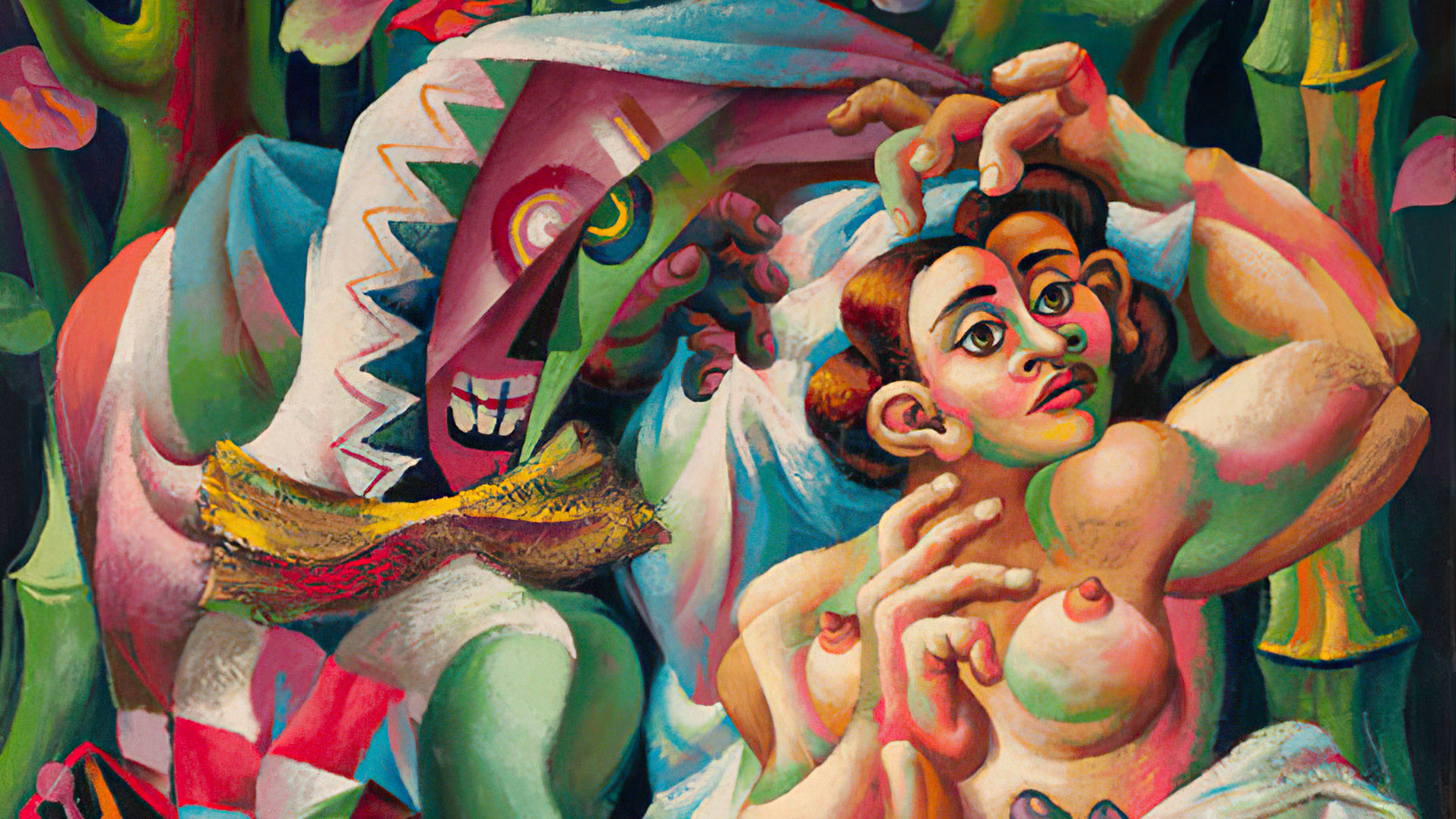 At the Vero Beach Museum of Art, Cuban Art and Identity: 1900-1950 surveys painting from the first 50 years of the Cuban Republic—a time of nation-building when many artists focused on defining lo cubano. In excerpts from his catalogue essay, “Representing lo cubano: Cuban Painting, 1900-1950,” curator Juan A. Martínez looks at the theme of music in the art of this era.

Cuban art in the first fifty years of the Republic (1902-1950) came of age and caught up to the achievements in literature and music. So-called modern and academic artists from multiple generations produced a remarkable body of works with emphasis on the expression of Cuban themes. The interest in exploring and visualizing themes of collective identity is intricately connected to the rise of a new republic trying to define itself.  As it is often the case, an intellectual elite took on the task of imagining the nation for all citizens. In the case of Cuba, this process interacted with the clash of Spanish and African traditions, a strong North American presence, volatile governments, and the ups and downs of a monoculture economy based on sugar. Looking to the countryside and the city of Havana, navigating the Spanish and African heritages, sensing the political and social environment, artists created a wealth of narratives and symbols of lo cubano,or that which is Cuban.

The aim of this exhibition is to look at Cuban painting of the first fifty years of the Republic with emphasis on subject matter rather than style. It aims to explore four major themes found in academic or traditionalist and modern painting: the Cuban countryside, Havana interiors, religious traditions, and music.

In representing the Cuban countryside, traditionalist and modernist painters generally concentrated on the landscape and on the life of the peasant or guajiro(a). For the most part, the peasant and country life was romanticized as pastoral. The land itself, its flora, and rural traditions were seen as a major source of national ethos by both camps.

Contrasting with the images of Cuba showing the countryside as the repository of that which is authentically Cuban are those that represent the city of Havana as the epicenter of Cuban culture.  Modernist and traditionalist artists painted the streets, architecture, and interiors of the capital. The carnival, processions, street vendors, views of narrow and populated streets in Old Havana, the city’s “baroque” architecture, and still life of typical flora and fauna also became symbols not only of Havana, but of Cuba itself.

The Spanish conquistadores annihilated the indigenous Taínos and their culture, including their religious practices. They were not as successful with the Africans they later brought as slaves. Since at least the nineteenth century, syncretic religions of African and European beliefs developed in the island. European/Spanish, Yoruba, Congo, and Calabari religious traditions collided and blended in Cuba giving way to new religions such as Santería, Palo Monte and Abakuá. During colonial times there was a production of Catholic religious paintings for churches and wealthy patrons, but it never developed into a strong school or gave us outstanding painters in that genre. In the Republican period there were a few painters, modernist and traditionalist, who represented religious images based on Catholicism. More painted poetic versions of Afro-Cuban religious figures and practices beginning in the late 1920s.

Given the prominent role of music in Cuban culture it is not surprising that it is a recurrent theme in painting of the early 20th century.  Cuban music, like most the Island’s culture, began to develop in the 19th century while still under Spanish rule. By the 1920s there was a variety of popular music on the scene: Danzón, Son, and Rumba, among others. These musical forms combined European and African instruments and musical elements to create Cuban music. Music and dance were also major ingredients of Afro-Cuban religious practices. At times, the line between the visual representation of popular and religious music/dance is blurred.

Since the early 20th century popular music has been one of Cuba’s major cultural exports and known far better than its literature and visual arts. The musical forms known as Rumba and Son were particularly popular in the 1920s and 1930s and inspired a number of painters. Among the modernist painters, [Eduardo] Abela was one of the first to represent scenes of musicians and dancers performing popular music, such as Fiesta en el batey (Party in the Batey), 1927. In this early modernist painting, Abela was particularly effective in giving the sense of animated dance movements and supposedly music through the handling of color and lines.

Víctor Manuel painted a few, but ambitious carnival scenes in the 1940s. The one in this exhibition, entitled Carnaval, shows a group of revelers, some couples, engaged in vigorous street dancing. Among the traditionalists, Oscar García Rivera was also attracted to carnival scenes, as seen in his large Comparsa (Carnival Parade), c. 1940. Using a representational approach, García Rivera concentrates on illustrating a custom rather expressing, as in the case of Víctor Manuel, the rhythm and sensuality of Afro-Cuban popular music.

Carlos Enríquez’s The Musicians, 1935 is an outstanding representation of a Son musical group of the 1930s, when this type of music was at its high point.  He paints a group of Afro-Cubans playing bongos, guitar, singing, and dancing.  The expressionistic approach and the dynamic representation of the dancing figure suggest the music itself. Sánchez Araujo’s (1887-1946) Black Musicians is a study for a section of a large painting entitled La Rumba of 1937. In a realistic style that contrasts with Enríquez, he also represented a convincing scene of a musician in action and the suggestion of drumming sounds.

One of the most impressive representations of the musical theme in Cuban modern painting is [Mario] Carreño’s Afro-Cuban Dance, 1943. This large painting offers a monumental expression of sacred Afro-Cuban dance and by extension music. A costumed male is shown dancing with a semi-nude female in the countryside at night. The massive but dynamic figures, painted with bright colors, bold curves, and collage elements, create a strong sense of movement. The mood of the painting is earthy and mysterious at the same time.

In two important and contrasting paintings in this exhibition the piano takes center stage. This instrument was introduced to Cuba in the 1830s and its practice soon spread due to the formation of numerous music schools during the same decade. By the early 20th century piano lessons were part of the education of middle and upper class Cuban women.

Peláez’s Women Playing Piano, 1940s, represents that tradition. In her various versions of the subject, sometimes showing a duo playing the instrument as in this case, the performance or lesson is an intimate and domestic affair, suggested by the closeness of the figure(s) to the picture plane and by the shallow home interior. On the other side of the spectrum, the piano is part of a popular music scene in Roberto Diago’s (1920-1955) Pianist, 1940s. He represents a nude Afro-Cuban woman wearing large earrings and playing the instrument in a pitch-black space.

The extensive use of black in the background gives the painting an air of mystery, accentuated by the ambiguity of the scene itself. Is this a nightclub act? Black musicians working directly or indirectly for the tourist industry prevailed in Havana then as now.

Painters in the early Republican period introduced Afro-Cuban popular music into high art as an expression of lo cubano. They paid tribute to Cuba’s most widely recognized artistic form, the traditionalists mostly concerned with representing the musicians, instruments and dancers, and the modernists with the expression of the music’s insistent rhythm.

Cuban Art and Identity: 1900-1950 runs through February 2 at the Vero Beach Museum of Art.