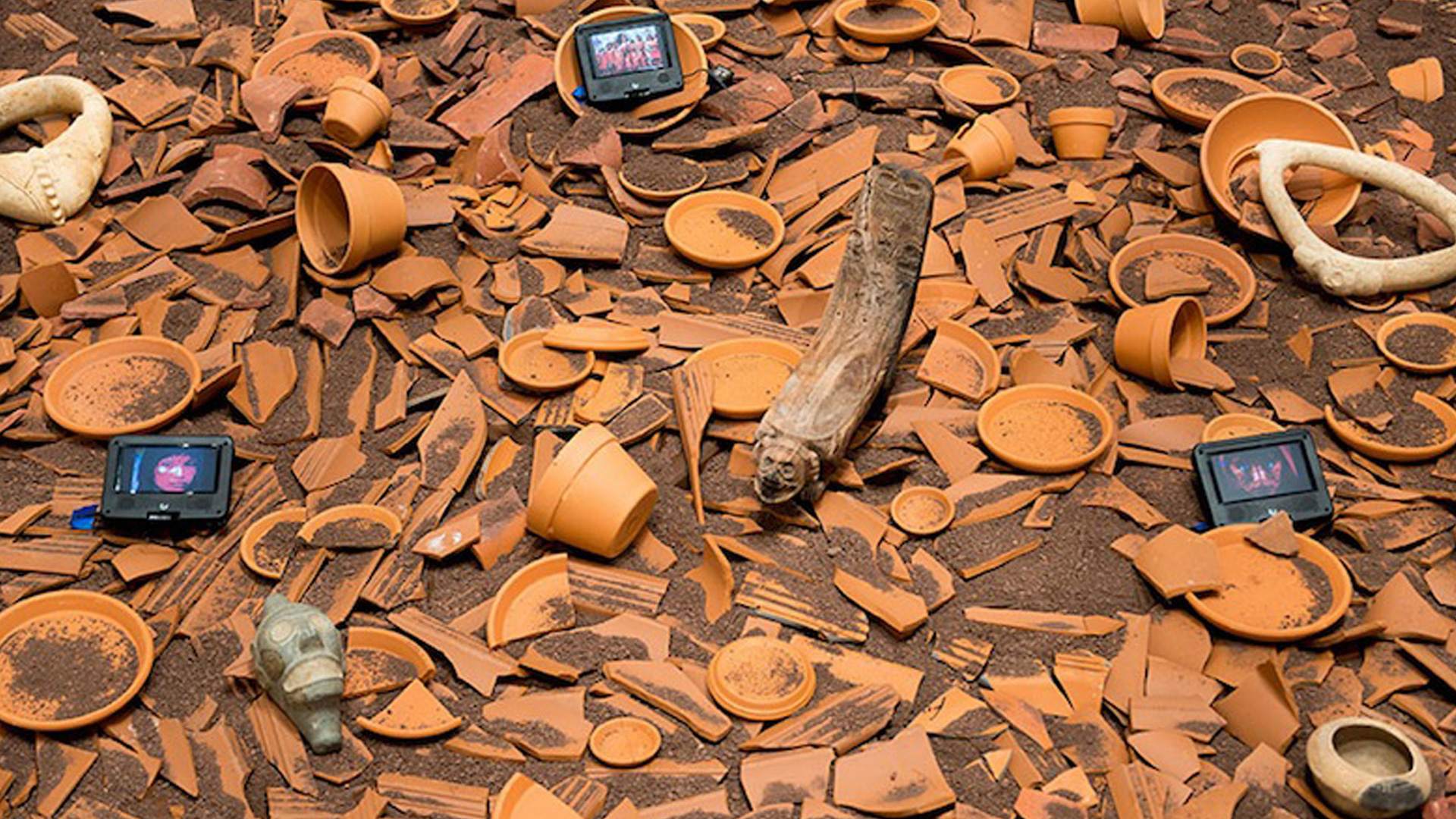 With so many shows opening this week and next, this Update is focusing on just that. Stay tuned for another Update next week with news of current shows by Carlos Garaicoa, Humberto Díaz, Los Carpinteros, and many other artists.

Peláez coming to the Pérez. Looking ahead to December, the new incarnation of the Miami Art Museum opens its doors to the public on the 4th. A major retrospective by Chinese artist Ai Weiwei tops the exhibition list, but the show we’re waiting for is Amelia Peláez: The Craft of Modernity. A focused look at the artist’s work set against the changing cityscape of Havana, the exhibition will be on view at the Pérez Art Museum Miami from December 4 to February 23.

Closing this Sunday: Pan American Modernism. At the Lowe Art Museum in Miami, Pan American Modernism: Avant-Garde Art in Latin America and the United States looks at modernism as an international phenomenon throughout the Americas. The show sweeps through 13 countries throughout the hemisphere, offering an interesting context in which to consider works by Cuban artists such as Eduardo Abela, Wifredo Lam and Amelia Peláez. The show runs through this Sunday, October 13.

Opening tonight: CINTAS Foundation Fellows Finalists Exhibition in Visual Art. For decades, the CINTAS Foundation has been awarding fellowships to creative artists of Cuban background living outside the island. This year’s finalists in visual arts are Cristina Lei Rodríguez, Joseph Michael López, Lourdes Perdomo, Marta María Pérez Bravo, Olivia Ramos, Lissette Schaffler, Rubén Torres Llorca, Iván Toth Depena, and Angela Valella. Works by all nine artists are on view at the MDC Museum of Art + Design in Miami through December 15. The winner will be announced at tonight’s opening reception, which begins at 7 p.m.

Opening tomorrow: Ever Fonseca in Havana.  Last year, Ever Fonseca was awarded Cuba’s National Prize for Plastic Arts (Premio Nacional de Artes Plásticas). To mark the honor, the Museo Nacional de Bellas Artes is presenting Ever Fonseca, Evocación Lírica (Lyrical Evocation), a selection of works gathered from the MNBA, the artist’s own collection, and the collections of institutions such as the Biblioteca Nacional José Martí. Curated by Hortensia Montero, the show spans Fonseca’s career from 1960 to the present, and includes works that have never been shown publicly. In announcing the show, Elsa Vega of the MNBA praised Fonseca’s “intrinsic relationship with the island’s indigenous flora and fauna, and with the myths and legends of the Cuban countryside, which have imparted a mythological and genuine character to his lyrical expression.”

Opening Saturday: Curators, Come Home! in Havana. Last April, independent curator Sandra Ceballos initiated a new exhibition series: Curators, Come Home! A response to her earlier, anarchically open-to-all exhibition Curators, Go Home, the series opened with a video show curated by Gerardo Mosquera. Now, the second installment of Curators, Come Home! is set to open at the Espacio Aglutinador gallery. Organized by curator, author, and professor Rachel Weiss of the Art Institute of Chicago—whom we interviewed in 2011—the exhibition presents a video installation by Celia Gonzáles and Yunior Aguilar, and the Cuban premiere of El Canto del Cigne, a documentary about conceptual and performance art in Cuba in the 1980s by Glexis Novoa. The opening reception begins at 7 p.m. Saturday, and Weiss is expected to attend.

Opening next Wednesday: Humberto Castro in Miami. At the Frost Art Museum, Humberto Castro: Tracing Antilles is a multimedia, site-specific installation that takes a conceptual look at the islands of the Caribbean. To create the work, which was commissioned by the museum, the Miami-based artist traveled to Haiti and Cuba “to make real contact with the islands and their populations in an effort to understand the long-term effects of colonialism.” The continually transforming exhibition is a mix of large-scale paintings, bronze sculpture, traditional crafts, pre-Columbian artifacts, video, photography, and found objects. The opening reception is scheduled for 6 p.m. next Wednesday; the show runs through February 16.

Opening next Thursday: Concrete Paradise in Coral Gables. A longtime landmark on the city waterfront, the Miami Marine Stadium was shuttered in the wake of damage by Hurricane Andrew in 1992. A modernist icon in poured concrete, designed by Cuban-born architect Hilario Candela, the stadium has since become home base for a graffiti artists, skateboarders, and leaping parkour practitioners. Now, a civic group is looking to restore the stadium to its former splendor. At the Coral Gables Museum, art and architecture conservator Rosa Lowinger has curated Concrete Paradise: The Miami Marine Stadium takes a thoughtful look at the stadium’s past, present, and visions for its future. On view through January 5.

Cuban Art and Identity: 1900-1950. At the Vero Beach Museum of Art in South Florida, curator Juan A. Martínez surveys painting from the first 50 years of the Cuban Republic—a time of nation-building when many artists were focused on defining lo cubano, the essence of what is Cuban. Addressing such themes as landscape and peasant life, Havana as the nation’s cultural center, religious traditions, and music, the exhibition features works by Armando Menocal, Mario Carreño, René Portocarrero, Amelia Peláez, Eduardo Abela, and many other artists. Drawn from public and private collections in the U.S., the exhibition also includes, as a point of comparison, works in more traditional styles by Antonio Rodríguez Morey and others. Opening Saturday, October 19, the show remains on view through February 2.

González-Torres at Princeton. Don’t look for this exhibition in the Princeton University Art Museum’s galleries. For Felix González-Torres: Untitled, the museum has installed the artist’s now-classic billboard of an empty bed—evoking the haunting sense of love and loss that defined the AIDS crisis—in various locations in the Princeton area, including just outside the museum’s front door. On view October 21-December 16.

Fusco wins Absolut Art award. Congratulations to performance artist and scholar Coco Fusco, winner of the 2013 Absolut Art award for art writing. The award carries a cash prize of €20,000, plus a budget of up to €25,000 for the publication and distribution of a new book in collaboration with a leading publishing house. Fusco’s proposed book will analyze recent performance practices on the island.

Varela in California. Nueva trova icon Carlos Varela kicks off a mini-concert tour in California this weekend with a Saturday-night concert in Sacramento, presented by the nonprofit cultural group Californians Building Bridges. The evening event also includes an exhibition of work by Cuban artists Kadir López and Alejandro Leyva. The next day, October 13, Varela moves down to Los Angeles, where singer Jackson Browne is presenting him at the legendary club Largo at the Coronet. The following Wednesday, October 16, the two singers join forces in San Francisco in a gala benefit for the Rainforest Action Network. The tour wraps up on Friday, October 18 with an 8 p.m. concert at San Francisco’s Brava Theater Center.