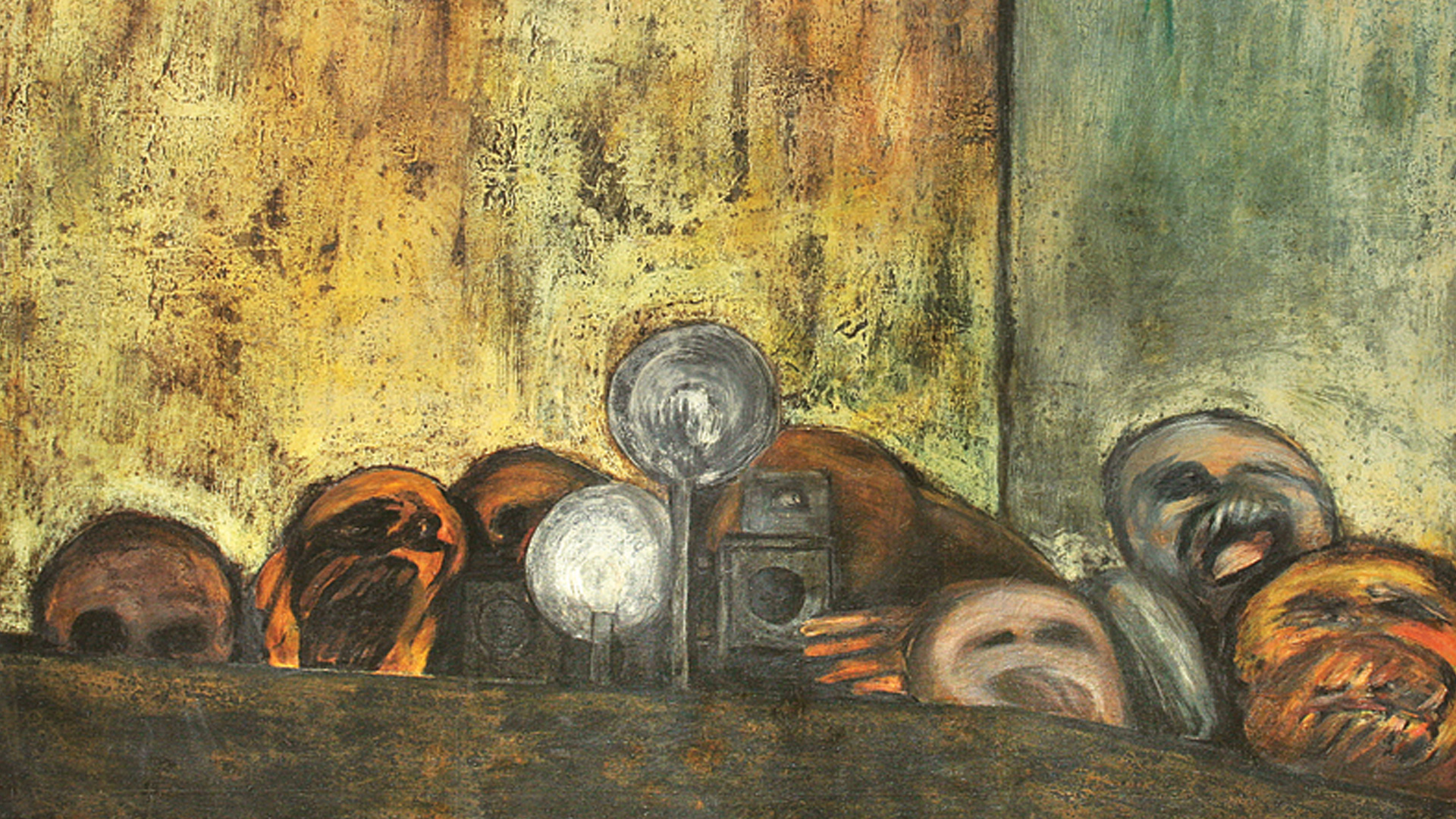 Antonia Eiríz was born in spring, on April 1st, 1929, in the Juanelo neighborhood of Havana. According to the Chinese zodiac she is a snake, and those born under this sign always prefer intellectual challenges. Matters of the body do not interest them, but rather analysis and intuition.

Daughter of Galician immigrants, she is the youngest of six siblings. In accordance with the educational thinking of the time, Antonia, like her sisters, soon learns to cook, knit, and embroider. She loves costume design and, encouraged by her sister Mercedes, Antonia begins studies at the San Alejandro Academy in 1953. There, she takes classes in drawing, painting, sculpture, and engraving.

Soon, this enigmatic woman with the large eyes and intense inner life becomes the leading figure in Cuban art. In his book Elapso Tempore, Hugo Consuegra, a colleague and close friend, describes his first meeting with Antonia:

“Of greatest importance for me is that here in the Lyceum, on May 21st, 1953, I first saw Antonia Eiríz. I already knew her from ‘hearsay,’ since Antonia had been, from an early age, ‘a legend in her own time.’ She was my age, 23, and was dressed in her favorite outfit: a white blouse, scooped shoulder to shoulder, with a neckline of small triangular laces, I think it’s called—and a black skirt à la Edith Piaf.”

Nineteen fifty-three is also the year in which Antonia participates in her first exhibition, along with Guido Llinás, Fayad Jamis, Antonio Vidal and Manuel Vidal. That same year she marries, and a year later her son Pablo is born.

Although Antonia did not formally become part of Los Once [The Eleven], her connection to this pioneering group, is essential. It is not only profound friendships that link her to the group, especially to Guido Llinás, whom she considers her mentor, but that her training and her vision as an artist take shape during this time, along with her relationships with members of the group:

“The 1950s were, for me, the most ‘Cuban’ in every sense: in clothes, music, art. Los Once wanted to broaden the artistic vision beyond just painting what was ‘Cuban.’ The meetings were held at Raul Martinez´s house, with painters and sculptors such as Tomas Oliva, Guido Llinás, Antonio Vidal, and Hugo Consuegra. The only time I was in Portocarrero´s house was when we went to see him because he was a little upset with us. They explained that they were not against him but as young artists they needed to do something new. I shared Los Once´s ideas, but I was never part of the group.”

The group Los Once signified a fundamental shift in modern Cuban art, pushing beyond the folklorism that dominated Cuban painting and adopting a position of social engagement and commitment. It is in this context that Antonia Eiríz emerged as artist.

When, in 1959, the exhibition Cuatro pintores y un escultor [Four Painters and a Sculptor] was presented at the Lyceum in Havana, Baragaño wrote an article in the newspaper Revolution that became a sort of mission statement for the group:

“Poetry is made with life, with dreams, with matter, and with the man. The political militance of poetry within a party line is the vilest of cowardices. Because while it´s true that the poet must have a clear revolutionary vision of the poetic and the political, when the political is turned into a poetic theme, everything stops. Poetry is dialectical construction and destruction of reality, to arrive at a fundamental synthesis.”

Four years later the group showed their work again, in Galería Habana, coming together under the exhibition title Abstract Expressionism. This would be the last exhibition of the group.

A year later, two solo exhibitions by Antonia Eiríz are presented. The first, Pinturas y ensamblajes [Paintings and Assemblages], takes place at Galería Habana, the same space in which she had shown with Los Once the year before. The second, Ensamblajes, takes place at the Museo Nacional de Bellas Artes, where she is invited to present her work as an artist of the month.

These two exhibitions, as Edmundo Desnoes well states, have the shock of an earthquake, shaking up everything that had been established. Desnoes says: “When a volcano is born, the whole landscape changes. And that is Antonia Eiríz’s exhibition at Galería Habana.”

In the text of the exhibition catalogue, written by Consuegra, one can read:

“… the painting of Antonia Eiríz is a mixture of kicks and trumpet blasts, but in a dose so sharp, so stark, so unadorned that it becomes almost intolerable for the viewer who likes only to be flattered, entertained, and sweet-talked, and for others who partake of art as a cerebral hors-d’oeuvre. …”

Referring to the style of her work, Antonia says in an interview with Giulio V. Blanc that she always wanted to be an abstract painter. This comment, which so often goes unnoticed, is essential. Antonia is obsessed with portraying entelechies, capturing essences, controversial states of being. Her interest is in accessing the invisible, the unrepresentable, the visceral. Which is, in essence, abstract.

Antonia would say that these “small heads and figures appeared almost by a weight of their own, which was not my intention.” With a misshapen, ghostly appearance—without hands for caressing or feet for walking—they seemed to drift through rather than inhabit the space. They are like lost souls who wander in a sort of terrifying purgatory. Or more horrific, like soulless, tormented bodies that merge into the hostile space that constrains and annihilates them. Except for some faces in which features can be recognized, as in La Anunciación, these visages—inheritors of Ensor´s anguish—are synthesized from three vital and useless holes. Faces like profound, empty, bowls, blinded, dried up, incapable of tears, without the grace of eyelids bringing the relief of rest and sleep. Bowls possessed by anxiety, their deprivations including even the commiseration of the last mite.

The mouths are immense holes, chilling prelude to a bottomless abyss: the depths within. When the mouth is more fully detailed—which occurs above all in works from the early years of the 1960s (En la cola, La cámara fotográfica, Los de arriba y los de abajo, El dueño de los caballitos, among others)—the dominant trait is not tender lips but sharp teeth that seem more beastial than human. Terrifying gatekeepers. Later, the mouth will be only this: a vast entry hall to monstrous tunnels that grow in dark cliffs, inhabited by the scream or the plea that we fail to understand.

Antonia Eiríz: A Painter and Her Audience remains on view at the MDC Museum of Art + Design in Miami through November 17, 2013.