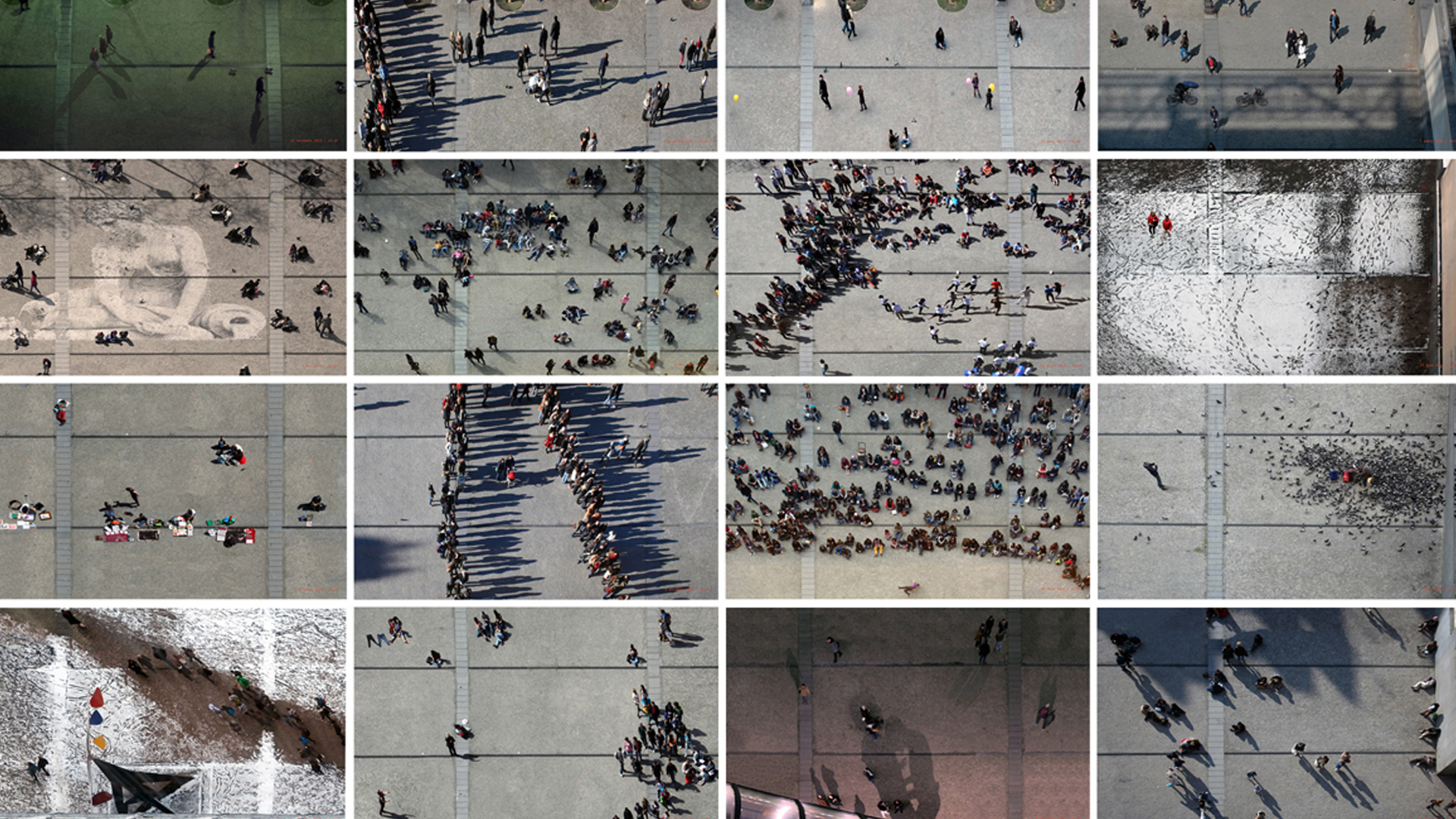 On Tuesday, we began our focus on Cuban artists in exhibitions outside the Cuban Pavilion with a look at the Latin American Pavilion. Today, we wrap up our coverage of the Venice Biennale with Personal Structuresand the virtual exhibition Balconism.

Personal Structures with Atelier Morales. Part of an ongoing global art project initiated in 2002, Personal Structures brings together artists of diverse cultures and ages to explore time, space, and existence. Presented as a collateral exhibition at the Palazzo Bembo, this iteration of the project includes more than 70 invited artists from over two dozen countries. Representing Cuba: the Paris-based duo Atelier Morales (Teresa Ayuso and Juan Luis Morales).

Here is Atelier Morales’ statement about Tribute to Monet, their work in Personal Structures:

Our project is a tribute to Claude Monet and his Rouen Cathedral series, which the French Impressionist painted from February 1892 to April 1893. These consist of 20 selected paintings depicting the main façade of the cathedral at different times of the day and year, and reflecting changes in appearance and feelings towards the monument depending on variations of lighting conditions. Monet showed, at his gallery in Paris, an unprecedented experience: the relationships between space, time and existence through art.

Monet named each of his pictures according to the time of day and particular atmosphere surrounding the cathedral such as A l’aube, Effet du matin, Plein midi, Soleil, Plein Soleil, Gray time, Harmonie brune, and Journée. In this way, the viewer could see and appreciate both the different artists’ mood in relation to his subject and the visual conditions transforming that particular space as time was changing.

Tribute to Monet expands the Monet experience through actual technologies such as digital photography and three-dimensional prints; it allows the spectator to feel, observe and analyze the urban space, the Pompidou art center in Paris, as an architectural setting and a mental symbol. The viewer can observe simultaneously the changes of light, atmosphere, actions, and people in the space represented.

We are showing multiple large-format images of the same space and buildings at Beaubourg area, taken at 20 overlapping times and periods of the year. The work has an evolving nature, each of its parts is marked with the date and time the photograph was taken; this allows any image to be replaced by a new one whenever a collector acquires one or more. In other words, new dates and hours of the same image will be constantly filling the voids. Our artistic proposal consists in merging the different times of day in one work, instead of presenting each part on itself.

Monet chose a cathedral for his series, because of its religious significance and architecture in the admired Gothic style, at that time. We have chosen the Pompidou art center, a cultural symbol of communication for millions of people who visit it today. Museums in general have become an essential place for elevating and stabilizing our 21st-century existence.

At Palazzo Bembo the viewers will have the impression of travelling through this urban space at different moments in one moment.

Balconism Virtual Exhibition with Carlos Garaicoa. Presented by the independent, Milan- and Zurich-based curating agency Art Apart, Balconism offers a virtual tour of Venice by way of 10 balconies, selected by an international group of artists including Carlos Garaicoa.

Here is Art Apart’s description of the project:

The project Balconism, invented by Oxana Maleeva and Steve Piccolo, takes an ironic, vaguely Situationist approach, offering an experience to all, without limits of time and space, lingering on the threshold (the balcony) between public and private, earth and sky, reality and imagination.

The free Balconism app is not “about” art… it is an artwork in its own right. The exhibition exists only on a virtual level as an application for iPhone/iPad and a website, as well as a special issue (on paper) of the artists’ magazine E Il Topo. Visitors to Venice can use the Balconism map to find the original balconies, observing their transformations and listening the stories invented by the artist-authors. People anywhere in the world can also take a virtual tour using the app.

During the Venice Biennale artists attempt to come to terms with the unique atmosphere of the city, all too often by inserting objects that often seem to compete with it, rather than enhancing a context already packed with history, monuments and works.

Balconism refrains from disturbing the city, and tries to put its beauty into focus by providing an unusual filter for the experience of Venice. Balconism also sets aside the idea that art has to be made by artists. The lack of material artifacts in the show opens the way for the participation of writers, critics, musicians, designers and architects, treating the city as a true encyclopedia of possible narratives, from the perspective of different disciplines.