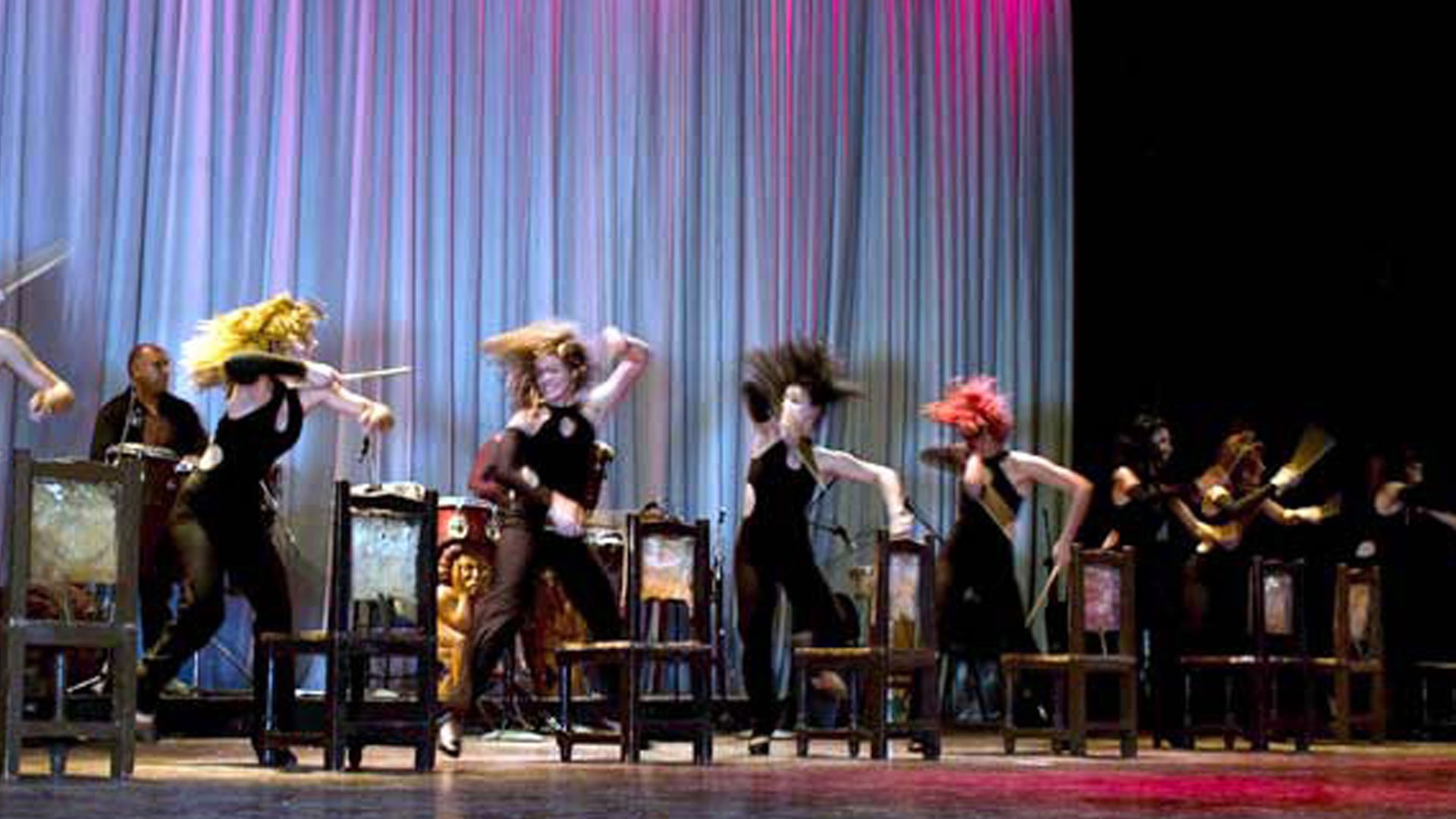 “Girls, learn with your mouths and then move your feet. And one, two, three, ta tatá qui qui qui tá,” says music director Eduardo Córdova Díaz to the twelve Habana Compás Dance (HCD) company dancers. They interpret Liliet Rivera’s choreographies using drumsticks, slippers, chairs, claves, castanets, heels, chequerés, drums, in addition to flamenco gestures and Cuban folkloric dance moves. The youngest dancer of the group is just 20, and the oldest is 24. “In a perfect picture of the company we wouldn´t wear dresses but pants, something modern, and we cannot miss a drum,” muses dancer Ileana Diaz a few minutes before another rehearsal. “Sticks and chairs would also be part of the picture,” say Grettel Llorente and Mónica Diaz, also dressed in black leotards and shorts.

Although there are new faces and a more diverse style, eight years of friendship have motivated this group since the very beginning. “What moves HCD is unity. Had it not been for the relationships we have, the group would have split up,” says the choreographer and director, whom everyone addresses simply as Liliet. The girls don’t complain about commuting on their own every day, and recently they spent two months without payment—which they sometimes invest in their own costumes. Also, they don’t miss a single day of classes and rehearsals, which have been taking place for a few weeks at the Prodanza Center located in the Marianao district of Havana.

The lack of a headquarters prevents the establishment of children’s workshops—very important for the maintenance of a company that is not state-supported. Previously, the troupe rehearsed at the Concepción Arenal Student Society, where nearly 300 children from 5 to 14 years old were enrolled and offered percussion and dance classes. “Little by little, the great avenues will open up and we’ll go ahead,” says Liliet confidently; she is eager to give her colleagues a more comfortable rehearsal space and more adequate salaries. Some members of the group have completed college or high school, or have graduated from computer science or accounting courses; others continue university studies in the little free time they have available. The pace is hectic indeed: Habana Compás Dance ballet classes and physical training take place on Monday, Wednesday, and Friday; contemporary dance and folklore on Tuesdays and Thursdays, always in the morning. And after lunch come rehearsals.

“At least we do what we like. The more we learn, the more we will merge. When dancing, Liliet mixes everything,” explains Ileana, while the music of the pas de deux adagio from Le Corsaire wafts down the stairs and some neighbors stir dominoes nearby. Ignoring these nearby sounds, the dancers comment on the latest course that allowed them to discover the joropo, a Venezuelan and Colombian traditional genre they feel able to dance and play now. According to Liliet, the broad spectrum of training as a choreographer has allowed the group to move from jazz to acrobatic elements—something they couldn´t do ten years ago.

“Work, work and work, I always say that, because nobody can fight against work,” says the young director. Public response in Cuba and abroad confirms that they are on the right track: in the street, HCD is identified as the beautiful dancers of the sticks and percussion chairs. Liliet Rivera, Lisette Fleitas, Thais Hernández, Mirlenis Rodríguez, and Adriana Bolufé were the staff pillars on which Liliet began to base the company. In 2004, for different reasons, each left the Lizt Alfonso Company. Their professional experience with Lizt gave them two unbeatable tools: dance company training and a friendship that made them join forces to dance again, with the certainty that together they could carry out a project. Liliet had already choreographed. That moment of absolute freedom, coupled with the confidence of their friends, encouraged them to test new styles. Thus “Habana con paz” was born, as a fruit of love for their city and way of life.

The company dancers began searching new paths, and in 2008, a friend called in Eduardo Córdova. “The idea that the girls play percussion with drumsticks was his. Percussion accompanied by footwork is not like the normal footwork percussion with castanets. The difficulty increases! But Cordova taught us to read music, to play percussion; he stayed with the company with no self-interest, just that of helping us,” says Adriana Bolufé, a founder and current flamenco teacher. “He makes his own drums, paints the chairs we use, teaches us to play, and gives us advice.” “Córdova is special,” several dancers chorus almost in unison, and laugh at knowing that the public thinks there is a relationship between him and Liliet, due to their close friendship.

As a choreographer, Liliet has always been attracted by polyrhythms since her first creations with flamenco, ballet, and especially contemporary dance and Afro-Cuban elements. “After Córdova´s joining the group, I saw the future of the company more defined. Then the name of Habana Compás [rhythm, beat] fit perfectly,” says Liliet. She feels excited when remembering how much the use of chequerés, keys, drums, flip-flops, castanets, canes, and stools added to their performances. At first, they were incorporated by chance because they had nowhere else to sit where they rehearsed, and they found that these items worked aesthetically within their choreography.

Still seeking her own imprint, the director had the dancers let their hair down in order to break with traditional ballet style. Many of the dancers had to overcome dizziness and achieve better control. Over time, the initial members of the company gave way to younger dancers: one of them decided to move to Canada, the rest wanted to fulfill the dream of becoming mothers. But the relay was already in place.

Some girls had followed the founders from the Lizt Alfonso dance academy; others had come from Spanish societies or from the Spanish Ballet of Cuba School. All of them joined together in an attempt to do something different. Naturally, Adriana became the flamenco teacher and Lisette Fleitas the company régisseur. Liliet turned to the direction, choreography, and percussion accompaniment. Córdova developed her music skills and even taught her to play the siete bocas—“seven mouths”—a fusion instrument of bata drums that he himself created.

“I was called as a musician to join Habana Compás. But when I saw the conditions of the dancers, I thought about making my old dream of a percussion lab, and I began to train them to play congas, bata, and bongo. And when I saw Liliet’s skills, we started working together as a percussion duo,” says the king of drums. In addition to painting the chairs used by the dancers in every performance, he has exhibited an impressive collection of hand-carved instruments, in and outside of Cuba. Córdova feels proud when the girls are asked about their professional formation or when some people question whether they are drummers or dancers.

“I just gave them a tool to achieve a better fusion,” he humbly says, like an adoring father. He holds no title, yet is sensitive to the moods in the group as well as to external influences—sometimes harmful—perhaps because the child who longed to study psychology instead of music is still in him.

“Be careful with this, turn a deaf ear to negative things, all that one sees or hears is not true, analyze, verify, there can be no division. When something good is being created, destructive forces join together to thwart the attempt. Therefore I teach you love; I want you to see this job as a spiritual rather than material wave, a commitment to fulfill with oneself and others,” he reflects.

The noise of trucks, buses, and old American cars going up and down 51st Avenue in Marianao again mix with the clicking of dominoes nearby and the Corsaire music, composed by Ricardo Drigo in the nineteenth century. The HCD dancers put on their heels within a narrow hall, perhaps designed to encourage cooperation.

Rhythms arise from the palms of their hands; with their skirts they trace the paths in the choreography. They take the colorful chairs and improvise with a genuine naturalness. But the director is not satisfied; she believes they can still work with many more Cuban rhythms, and use pantomime and contemporary dance elements. Every Friday, Habana Compás Dance performs at La Maison, the Cuban fashion house. HCD participates in various theatrical galas, TV shows, and performances in hotels and festivals. Chile and Turkey were the scenes of their last performances abroad. Now, an event in Mexico is promised, perhaps the next opportunity to showcase the skills acquired with so much sweat.

The girls said that every teacher has been important. The joy of rehearsals diminishes any mishap. “We´ve made a big effort, but when I feel tired I look back and I see it is worth continuing,” Liliet confesses, before starting to rehearse again.