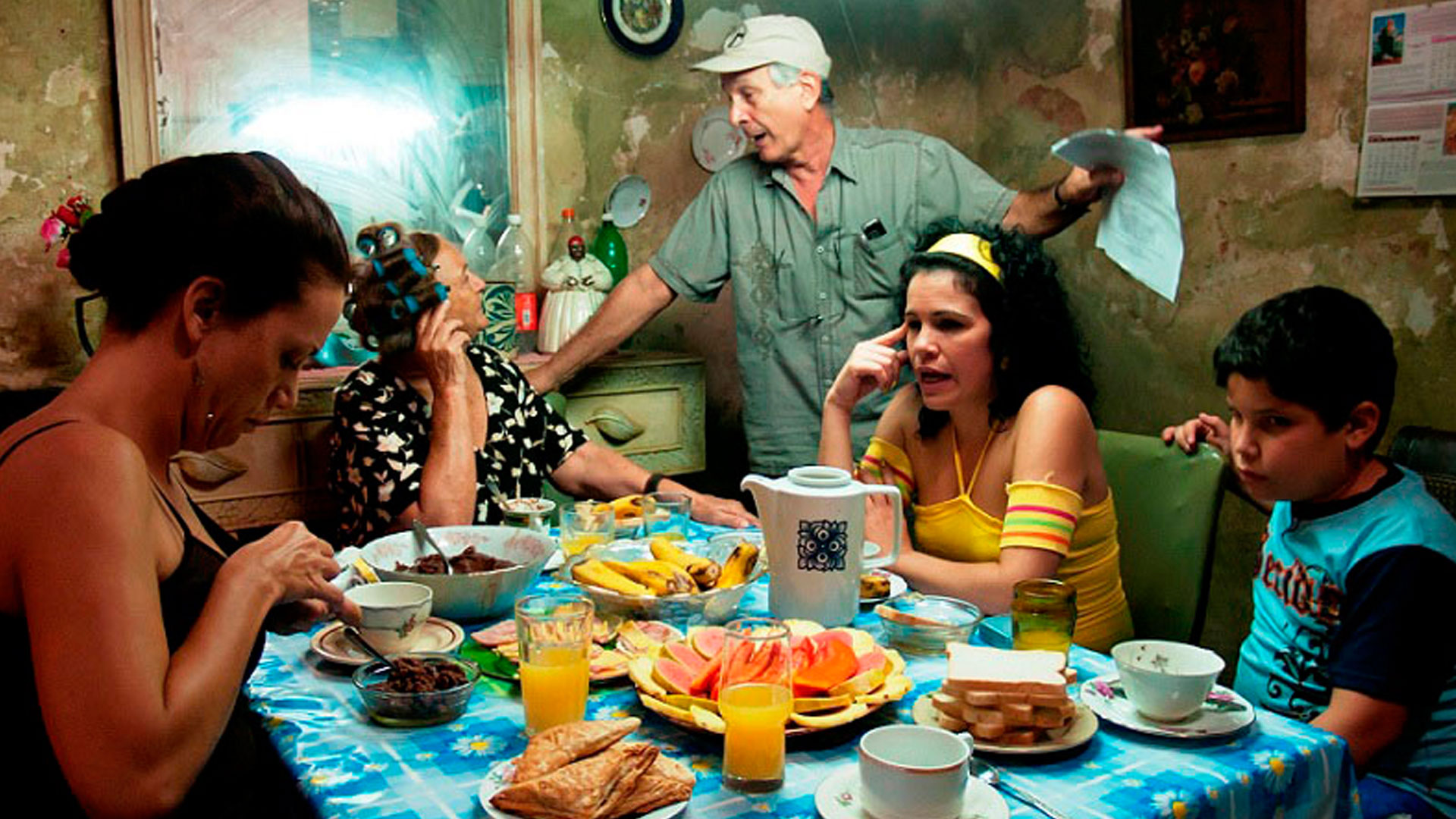 The new Cuban film La película de Ana (Ana’s Movie) premiered during the recent 34th International Festival of New Latin American Cinema in Havana, where it earned the awards for Best Screenplay and Best Actress for Laura de la Uz. A few months back, Cuban Art News spoke with the film’s director, Daniel Díaz Torres, who also directed Alice in Wondertown (1991) and Lisanka (2010). Díaz Torres (b. Havana 1948) talked about his experiences shooting and designing La película de Ana (Ana’s Movie), while editor Manuel Iglesias worked nearby on a sequence of the film.

Daniel, what´s the film about?

It’s about an unlucky actress, past 30, whose economic problems push her into prostitution. She becomes a person she doesn´t want to be in order to get out of that difficult situation.

This role she takes on is one of the best she has played, but it can never be publicly acknowledged because it’s practically a scam. It begins as a way to get out of financial difficulties; however, she becomes ensnared, “entangled in the net of a lie.” It also creates a conflict for her as it involves other family members. There is a prostitute who initially helps Ana for her own economic benefit, but who will work as an alter ego because she has interests beyond the strictly material. And here begins an interesting relationship between the two characters.

You wrote the script with fellow Cuban screenwriter and director Eduardo del Llano. How did the idea come about?

This project had existed for several years. The idea came from actress ​​Tamara Morales, who told Eduardo del Llano and me about this story. Then for some time we thought about what tone to take with this very evocative idea.

How does this film show hustling (jineterismo) in Cuba?

And there is enough of the reality of this phenomenon (hustling tourists) in the film. But not only in the sense of sexual transaction. We tried to make the phenomenon of prostitution not only a sex-related issue, the selling of the body. It also has to do with other things: feelings are often prostituted, even professions. This film shows prostitution in a more general way. That’s what matters and what I’m trying to do.

This story takes place in the year 2000.

At some time during the 2000s, not to be too specific. We didn´t want the film to be set in 2011, 2010. Rather, I would say it’s a story that takes place in the early 2000s. I think the excessive contemporaneity of a film begins to establish, almost unconsciously, codes and references. It’s better to be a little more open to interpretation.

Given the social content of the story, what can this film offer Cubans today?

From my point of view, we’re talking about personal dignity, authenticity, the fact of practicing prostitution—even unconsciously—by doing things you don’t believe in. Doing things for economic benefit without considering that ethics have been left behind.

These are present-day reflections linked, in turn, to the real and objective problem of meeting economic needs. People also need to feel that somehow they are fairly compensated for their effort and work.

Tell us about the cast and their performances.

The film is carried primarily by the two leading ladies: Laura de la Uz as Ana, and Yuliet Cruz, who plays the role of Flavia. Other characters are Yerlín, Paula Alí, and Tomás Cao. There are two foreign roles, played by a well-known Austrian actor, Michael Ostrowski, and a German, Tobias Langhoff. They play two reporters who come here with good intentions but with a clichéd view, to show the phenomenon of prostitution in Cuba as part of a more general international report on prostitution. This element triggers Ana´s risky decision to enter this underworld, which will bring her many problems.

Laurita, as Ana, had poignant moments in the film. I’d never worked with her before, but I really thought she could play this role. And far from disappointing me, I think she helped the film a lot. I owe much of the film’s success to her commitment and devotion. Laura and Yuliet were the first two people I spoke with; I liked the opposition between the two. And I think I like the way this occurred in the film.

In the case of the foreign actors, they arrived in Cuba with practically no time to rehearse. They arrived and began filming right away, which is quite hard, especially without knowing the language. They had to make a big effort to speak Spanish. The Austrian actor knew a little Spanish, the German none at all. It took a lot of work because it’s not easy. It was also difficult for Yuliet: she had to learn a little German and speak it in the film, because her character supposedly knows some German and is a translator.

Recently Cuban cinema, including independent films, has been rejuvenated with new faces—actors who had little film experience, and also younger individuals. Your latest films have been an example of this. Do you think this was intentional?

I don’t think about it. I think there are many prejudices and clichés. If there is a good actor, and he or she can achieve different characters authentically, I don’t see any reason to say: “No. He/She has already worked on several films and now should not work in another.” No! I think this has to do with the requirements of each particular project.

What can you say about La película de Ana In terms of genre?

[Film editor Manuel Iglesias responds:] I don’t mind saying this film is a comedy. But comedy is very broad. The dramatic comedy was invented by Italians, a form in which I would like this production to be inserted—there are extraordinary films here.

[Díaz Torres comments:] It’s like a comedic drama. More than a laugh, I’m interested in evoking a slightly bitter smile when viewing the story. A film that makes you think can also be entertaining; I can’t separate them. And for me the entertainment aspect does not imply something frivolous or superficial. It´s worth debating this topic. Of course, there may be lousy comedies, as there are also very bad dramas. And no one is exempt from making a bad film. But that is not attributable to a genre.

What has been your principal point of reference or inspiration?

None directly. I think about those directors and comedies I like. I think of the great films Woody Allen has done in this genre. I’m thinking about directors who have made very poignant comedies. And I think that’s what you would most like to do when you’re making a movie.

La película de Ana has a film-within-a-film element and plays with “mockumentary” features.

That’s a given, since the main character is forced to make a fake documentary about her false life. But what happens? That reality begins to break into images that are no longer the simple product of a falsehood but are real images. And in turn, there’s a point where the real prostitute is also filming. We hope that all this breaks down the fiction of the film and begins to suggest another possible reading, and that it makes you ask questions.

Who are the main specialists in the film crew?

I´ve always worked with cinematographer Raúl Pérez Ureta. Raúl wasn’t available for Lisanka, so I worked with photographer Ángel Alderete and was very happy with his work on that film.  I work with an assistant director, Hoari Chong, with whom I’ve made my latest movies. I haven’t yet defined the music.

Raúl Pérez Ureta has photographed most of the Cuban films produced by ICAIC recently. To what extent do you consider it healthy that a single cinematographer has so much responsibility?

If the directors ask for him and they work well together…. It’s not as if they have to use him because he’s on staff. I think there’s a moment when a certain level of communication is established with the cinematographer. Raúl’s first picture as director of photography was with me on Otra mujer (1986). Then we continued working together on almost every film. So if many directors choose Raúl, it has to do with the results on screen. There are some very good cinematographers here, and I doubt that Cuban cinema would be paralyzed if Raúl was busy elsewhere. But it’s no wonder he has earned prestige because of his work.

How was this movie produced?

It’s basically an ICAIC [Instituto Cubano de Arte e Industria Cinematográficos] movie with support from several international institutions. There are many prejudices about these co-productions, but I think almost all co-productions have been beneficial for Cuban cinema—I have no doubt. Most Latin American films have been co-produced, because making films is so expensive. And actually, the Cuban state cannot afford them, with very few exceptions. Everything must be done with rigor. One has to try, let’s say, not to prostitute oneself for a few cents by doing something one doesn’t believe in.

That brings us back to the subject of La película de Ana.

Yes. There are very bad co-productions, as there are also very bad Cuban films. Co-production is not a negative thing that sets out to damage a movie. Without co-productions, Cuban cinema would have died in the 1990s. That´s a fact, indeed.

How does the distribution of a co-production like this work?

It’s very complicated. It depends on the agreements reached, the territories that the co-producer has, what was agreed to in order to get the picture made. Some films have more distribution than others; it depends on each particular project. ICAIC always has the national territory to exhibit productions whenever they want. And usually there are expanded agreements with Latin America and other countries.

I have another script, called El buen demonio [The Good Demon], which I hope to get rolling.