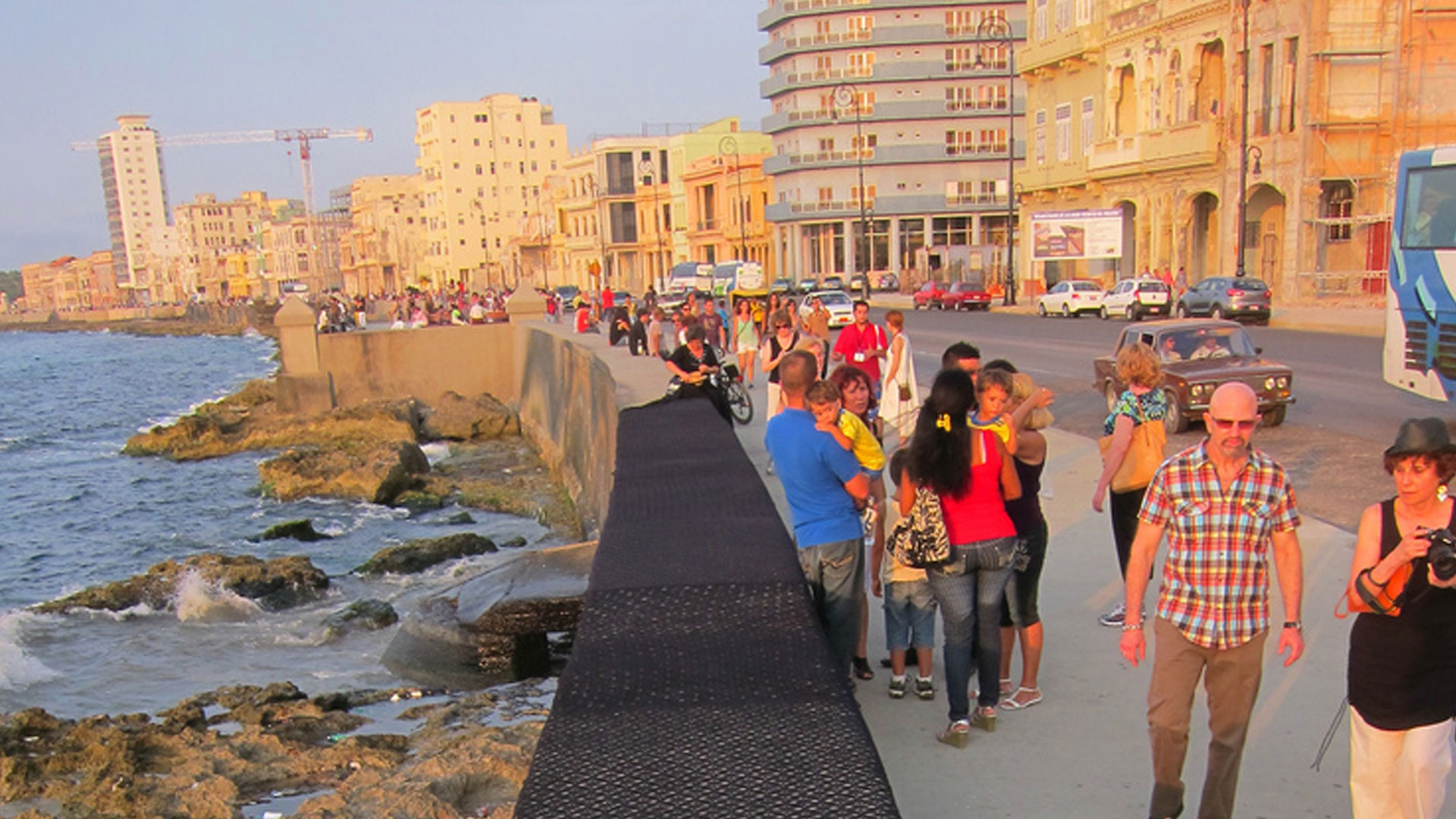 My conversation with Aimée García Marrero took place on a rainy November afternoon. Aimée tells me in advance that she is a woman of few words. On the day of our meeting, she is dressed in a simple white blouse with small pleats down the front. Handwork and crafts are an inseparable part of her life and creative work. “When I was a little girl, a woman who looked after me taught me how to knit and embroider. My mother was also very knowledgeble about crafts. All of this had a big influence on me,“ she says.

Aimée García Marrero (b. Matanzas, 1972) is, among of female artists, a kind of rara avis. Although her poetic oeuvre has lately become a space for confrontation and a distinctive discourse within the feminine gaze, she says this development hasn’t been deliberate. But it is no secret that her artistic language—existential and introspective—is marked by her female identity.

Her art also addresses postmodernist considerations such as intertextuality, and is closely related to signs and symbols. As a writer, painter, and sculptor, her work has been shown not only in Cuba, but the United States, Venezuela, Mexico, and Spain.

How did you become an artist? Was there a family tradition in this regard?

As a child I entered the Matanzas Vocational Art School, where I graduated in 1987. I went on to high school and then graduated from the Instituto Superior de Artes (ISA) in 1996. No one in my family was interested in art professionally. Art was only a hobby for my mother and for several maternal aunts and uncles.

Your studies at ISA took place during the deep economic crisis after the collapse of the Soviet regime, known in Cuba as the Special Period, which was especially difficult between 1992 and 1994. What was the impact of this crisis on your ’90s generation?

When we appeared on the Cuban art scene, most of the artists from the 1980s generation—who had participated in such polemical cultural activities as the exhibition at the Castillo de la Real Fuerza—had left Cuba. My generation had to face the so-called Special Period with all its hardships. As a result, we began to approach art in a more symbolic way, I would say, from the iconic point of view.

Moreover, as there were no resources to build even a frame, we had to be constantly inventing. We tried to do our best with few resources.

Censorship and obstacles posed by art institutions added to those hardships.

Our generation began producing controversial art in a more insidious way—not like the ’80s generation who did it more openly. We began to use appropriations and, I think, a softened visual, so that the confrontation with the institution is not so straightforward. In fact, that strategy still stands.

Today, very strong messages pass censorship and reach galleries if the artist is good at the game between art and institution. With us, artists learned to convey their messages in a less direct manner.

In art, there is a tendency that critics call “neohistoricist.” Could your art be defined in this way?

From the time I studied at ISA, my early works made reference to art history, but not so directly. Rather, I show my concerns as an artist and investigate more current topics by using mythological and Renaissance elements. Although my work has evolved, I have maintained this way of speaking out in my creative style.

Are you aware of your condition as a female artist and the presence of a language of gender in your work?

The gender issue is so implicit in my work, although I do not want to accept it. But it’s not a priority of my work. It is linked to my essence as a woman and as an observer of the surrounding world. My work has a great deal of self-reference, as it is based on my reflections on society and my womanhood.

I have explicitly addressed this issue in very specific works, such as the series Sabor del Silencio (The Flavor of Silence, 2002), in which I use family life and everyday objects, such as embroidered cooking pots and a table with an embroidered cloth. With this series, I wanted to talk about the silent burdens in women´s lives by using kitchen objects.

Why the interest in self-reference?

I use it as a way to channel the experiences coming from outside, establishing a dual language between the internal and the external. This double discourse goes through the social and the individual, as I am a human being.

Are you concerned about being classified as a feminist?

My work has nothing to do with feminism. Not related at all. I see no relationship between my work and feminism.

What tools have been useful for you in addressing the issue of gender in art?

That approach was not born consciously but from things inherent in my previous education, such as embroidery, weaving, and crafts, which I began to use as tools.

How did the transition from painting to micro-installations come about?

When I was a middle-level student, I began to study sculpture. However, during the Special Period, we only had mud to work with, and I just wanted to try other materials that were not available at that time.

So while I was at ISA, I switched to painting, but always related to objects. I made wooden frames with handpainted plaster reliefs. So my paintings became more like objects. Then I started making actual objects, which incorporated wires, newspapers, lace, lead, hair, blood.

What are your future plans?

To keep doing the kind of work I like: painting, photography, objects. I am preparing for an exhibition in Colombia. For next year I have planned a solo exhibition at the National Library of Cuba gallery. I´d like to show new installations and, if possible, work directly on the walls.

You can’t make installations that the public can interact with in all galleries; it depends on many circumstances. So I thank both Juanito (Delgado) for choosing me, along with 24 other artists, and for giving me the opportunity to participate in the 11th Havana Biennial as part of his curatorial project titled Detrás del muro (Behind the Wall).

Speaking of Pureza (Purity), your work showcased in the 11th Havana Biennial: From your viewpoint, what were the connotations of that giant black crocheted mat that the public saw draped over the wall of the Malecón?

It was a kind of game, a way to interact with the public so they could see my design. People passed by, looked at those two crocheters and wondered why they were sitting there, crocheting. For me, it was an act of continuity and growth, making a 20-meter-long fabric. I wanted to talk about patience, perseverance. Also about waiting. The Malecón is linked to encounters and partings, to dreams and disappointments.

Did becoming a mother prompt a change in the way you view and feel about your art?

It’s not easy to detach from a genre you have been working on for a long time. When I try to let go, it somehow re-emerges. I made a work where my son, Gabriel, appears and also some small embroidered firearms—perhaps this was a product of the act of giving birth to my child.

Motherhood is beautiful and, at the same time, difficult. I could not work for two years. It was a kind of artistic block. I see my current creation as a process of continuity of my previous work. Maybe motherhood did influence me, but I haven´t thought about that.

Is it possible to think of a future art where both feminine and masculine approaches could be equally shown without talking about gender perspective? Or for you, would that be a utopia?

I think it’s better to face artistic creation from the point of view of reflecting on the human being, the individual, as a species. Viewers or critics attach gender qualifiers to speak of exclusions that may or may not be real. I hope one day there is no need to qualify my art that way.