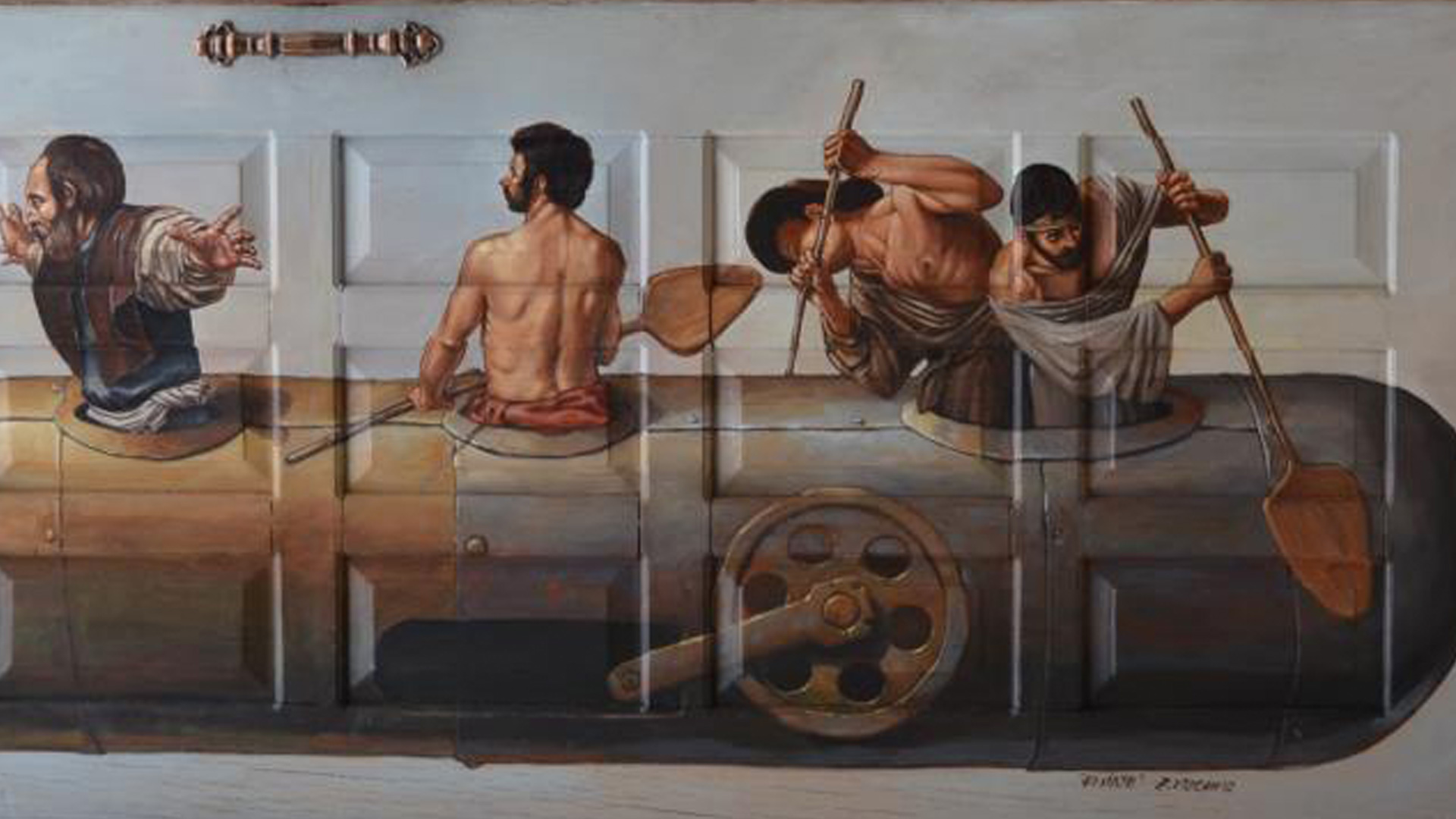 In the dynamic Cuban printmaking scene, Zenén Vizcaíno (b. El Vedado 1962) is an acid and explosive combination of Virgilio Piñera and Umberto Peña—and not because of the chemicals he uses in his prints. Now based in Mexico, Vizcaíno was, in Cuba, a disciple of printmaker and painter Carmelo González (1920-1990). As he explained in an email interview, his overarching artistic theme is the experience of the individual, in all its complexity and contexts, but never losing sight of the universality of human life.

While the Soviet Union was collapsing in 1990, Vizcaíno graduated in printmaking at the famed San Alejandro Academy. His thesis work already displayed a postmodern sensibility (though without a clear self-awareness of doing so), appropiating an artwork by Francisco Goya. It earned him the La Joven Estampa Prix (Young Printmaker Prize) awarded by Casa de las Américas. Gradually, Vizcaíno was enticed into objective figuration, a flirtation with the spectator in which inanimate objects assume lives of their own as protagonists in an irreverent argument.

For the past three years or so, Zenén Vizcaino has been working and exhibiting in Mexico. He has also shown his prints in Zurich and Sug, two cities in Switzerland.

Why did you take the everyday object as a poetic device?

For some time the object was the subject of my work. After many centuries seeing humankind representing itself in all media and in the most amazing ways, I found it most interesting to focus on manmade objects as the main theme of my work. Each object brings a unique and diverse story to each human being.

How did you arrive at the Taller Experimental de Gráfica (Experimental Graphic Workshop) in Havana?

José Omar Torres, my art teacher since I was a teenager, took me there, since he also made his lithographs there. It was in the early 1980s. I wasn´t studying at San Alejandro yet. I’m talking about the old workshop, in front of El Patio restaurant, in the former home of the Condes de Jaruco. This experience, seeing those great masters of Cuban graphics, and painting working there, was like love at first sight.

It was a small workshop with a family atmosphere. Besides José Omar Torres, as teachers you could see there, almost any day, artists like Armando Posse, Alfredo Sosabravo, Roger Aguilar, Choco (Eduardo Roca Salazar), Zaida del Río, and Nelson Domínguez. And many others I’d rather not to mention so as not to have an endless list. And there were artists from all parts of the world, who would drop by.

So I started to learn how to make prints, watching and following what they did. Then, when the new workshop opened—the big one on the Callejón del Chorro, at that time headed by (Francisco Rafael) Paneca—I started working there continuously.

What did you learn at the Taller Experimental?

At the TALLER—I say it with capital letters—I had many lessons that I still put to use. I gained a sense of discipline and learned how to behave properly. I worked with the master printmaker (José) Contino, and with him, you could not leave a single thing out of place. I also met many good and great friends and artists whom I lived and studied with daily.

There were, in those days, ten print shifts daily, minimum. Imagine the amount of work done, and of very high quality. Working there was a goal, a challenge and a merit: the mecca of Cuban printmaking at the time.

Do you define yourself as a writer or painter?

I am a contemporary artist. After doing a lot of graphics for about 20 years or so, interspersed with some periods of painting, I stopped printmaking for a while. Now I paint a lot, in different media. This makes me see the work as more vital, more renewed. I also do a lot of watercolors, which is difficult but very rewarding.

Which printmaking technique do you prefer?

I started out doing woodcuts. It’s a technique that calls for few resources: chisels, woodblocks, rollers, and a paper folder or spoon. With that you can finish a work. Then I made etchings, a difficult technique that I love so much—working with acids and the magical process of doing something without being able to see it, discovering later what you created only by making the print.

In the last few years I moved closer to lithography, which is simpler in execution. Now I’ve become somewhat lazy. I prefer lithography to other techniques that require so much work. I even do them in a single color and then manipulate them one by one. So I change the status of multiple pieces to make them unique. It’s more interesting that way.

Printmaking, like silkscreen printing and poster art, was a strong movement in Cuba early in the Revolution. With great skill, and because of the mix of who we are, Cuban printmakers appropriated techniques, concepts, and approaches to become as advanced in this field as any other part of the world. A lack of resources intensifies the wit, ingenuity, and talent.

Here you find the products of so many good engravers. And events like La Huella Múltiple, (The Multiple Print), El Encuentro de Grabado (Encounter with Engraving) or La Joven Estampa (The Young Print), where La Casa de las Américas recognizes excellent work with innovative discourse at the level of the most important artists in the world.

Is experimentation important in your work?

I do not think I am an experimenter. I am rather a restless artist. I change media, I mix techniques and styles. I follow the styles of major and minor masters. I invent and reinvent my work. Now, I am passionate about altarpieces and do as many as I can. Here one can find many things: iron, wood, whatever I consider necessary for the work.

What projects are you working on now?

My main project is to be alive. I work daily with joy. The next project is an exhibition at Veracruzana University [in Mexico], where they have a beautiful and very large gallery. I would like it to be something like a retrospective of my paintings, graphics, textiles, altarpieces, drawings, and my latest pieces. But things always seem to take their own path. That keeps us always moving.

I hope to return to Cuba at the end of this exhibition. It was supposed to be a double show with Vicente Rodríguez Bonachea (1957-2012), and it was supposed to open in November. But now plans have changed and I’m waiting for a confirmation on the date.

What is the role of teaching in your artistic life?

For more than ten years I’ve had a group of students to whom I teach drawing and painting, and give feedback about their work. Now I travel more and they’re far away, but I advise them and review their work through digital media, which make the world closer, virtually speaking. You can learn from teaching. Your knowledge becomes stronger and forces you to respond, to keep yourself updated on everything. I miss my students indeed

Would you say that choosing the path of the artist has paid off for you?

It has been as important as simply being alive. Living is a daily experience; you open your mind to other multiple and enriching ways of doing and thinking. You have a project in mind and ten of them make you sleepless. To make an artwork is like making a child whose fate you’ll never know.

Zenén Vizcaíno b. (Havana, March 5, 1962) Graduated in Mechanical Design of Dies and in Engraving at the San Alejandro School in 1990. A member of the Union of Cuban Writers and Artists (UNEAC) and the Graphical Experimental Workshop in Havana. UNEAC Coordinator of Guanabacoa village, where he has led the community project, “The Workshop,” since 1999.