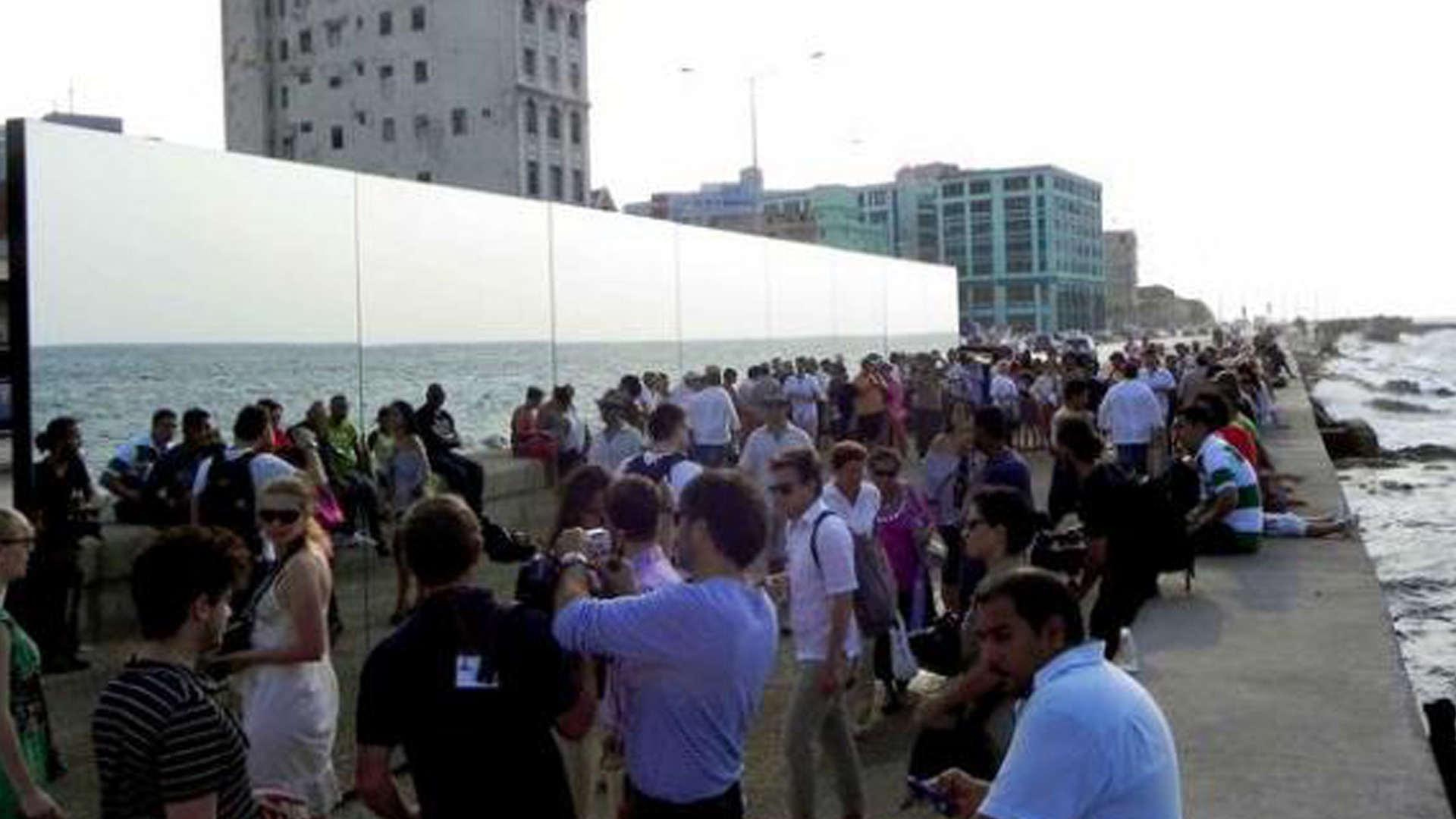 When we first mentioned Detrás del muro (Behind the Wall) in our Bienal preview last November and then profiled it in February, we knew it was going to be one of the most ambitious projects in a Bienal focused on bringing art out into the street. But we didn’t realize it would be so much fun.

Some of the works, like Alexandre Arrechea’s tower of ears, Nadie escucha (No one listens), were installed well ahead of time. But a week before the opening, the Malecón was dotted with art crews working feverishly to get the works installed and ready. As time went by, a lack of labels for the artworks turned the nightly stroll along the city shoreline into a sometimes-surreal journey of discovery: coming across a ghostly extension of the Malecón wall and finial in transparent Plexiglas, for example (Donis Dayán’s Limites), or a pair of gigantic wooden oars lying on the sidewalk (by Kcho), which were immediately appropriated as a bench by night-time fishermen. (For images of works in Behind the Wall, check the photo album on the Cuban Art News Facebook page.)

Because the opening coincided with Mother’s Day, the Malecón drew an even larger crowd than usual that evening, including many couples and multi-generational families, who freely mingled with the “art crowd” and took pleasure in exploring the art: opening and passing through the doors of Rafael Domenech’s Possible Chances, a freestanding red sculpture made of doors of varying sizes; posing for photos with Nadie escucha, sometimes with one arm draped over an ear; and grabbing a moment’s rest on Bancotodos, Inti Hernández’s sculpture of circular interlocking benches.

The evening quickly took on a festive air, in part from the performance works that punctuated the event. In Poemas para un agujero (Poems for a Hole), Fidel Ernesto Álvarez sent a troupe of performers down the waterfront, each carrying a huge bunch of black helium balloons, their strings anchored by a single starfish. Later the balloons were released, each bunch with its starfish taking off across the sky like an enormous misshapen bird.

By contrast, Carlos Martiel’s performance, Sujeto (Subject), was more than down-to-earth, with Martiel himself lying naked in the rocky shallows beyond the Malecón wall, a line of thin threads connecting his body to the shore. Aimée García’s Pureza positioned a woman at either end of a vast piece of black crochetwork, where they continued to crochet the piece. Between them, the work spread out like an enormous afghan, turning the wall—the usual seat for Malecón strollers—into a homier, more comfortable perch. Adonis Floris’s Fe—an enormous, handcrafted flat sculpure of the two letters—became an inadvertent performance piece as his team scrambled to finish installing it during the opening. It fit right in with the evening’s spirit of process and play.

Some of the artists listed in the original project proposal ultimately didn’t participate, while others scaled back or rethought their works. Originally envisioned as a series of wi-fi signs projected over the buildings facing the Malecón—a poignant wish for greater Internet access on the island—Alejandre González’s Sueno de una noche de verano (Dream of a summer night) became Sueños humidos (Damp Dreams), a series of signs bearing the wi-fi symbol attached to the chain-link fencing in front of the buildings. Florencio Gelabert’s Islas was envisioned as being anchored far enough offshore to break the horizon line, but the colorful little islands—including one with a stuffed parrot—ended up in the shallows, a reward for those hardy enough to belly-slide onto the wall and peer over. Originally proposed as a flock of oversized, freestanding pinwheels, Marianela Orozco’s Playtime became one lone pinwheel—a crowd-pleaser (and favored photo spot) all the same. Esterio Segura’s project Submarinos hecho en casa (Homemade Submarines) was part of the exhibition, but also became the subject of a separate gallery exhibition.

Many of the most successful pieces had a light, playful quality that counterbalanced their metaphoric significance and underlying meanings, which passers-by found immediately appealing. Duvier del Dago’s Dissection re-created one of the ancient cannons of the nearby fortaleza in papier-mâché, in a slice-by-slice exploded view that audiences explored with great curiosity. Arlés del Río’s Fly Away, with its silhouette of a jet plane carved out of a length of chain-link fencing, prompted more than one viewer to spread her arms in response. And in the humid evening heat, Roberto Fabelo Hung’s Aire fresco (Fresh Air)—a translucent scrim that envisioned glaciers floating in the harbor—brought its share of chuckles.

The project that perhaps most clearly defined the evening was Rachel Valdés’s Realidad/Happily Ever After, a gigantic length of mirror set up on the pavement opposite the Malecón wall. Broader metaphoric interpretations were largely set aside by a crowd that delighted in gazing at itself, posing and snapping photos with gusto and turning the work into a performance piece. Valdés made it even more festive by adding live music and a portable bar that dispensed mojitos to one and all—Malecón-strolling families, Bienal visitors, artists, and everyone else. Grandmothers sat on the wall across from Valdés’s mirror, elbow to elbow with foreign visitors as toddlers darted among them. In all, the opening of Détras del muro was one of the Bienal’s more memorable excursions into public art, and a provocative exploration of its theme, “artistic practices and the social imaginary.”