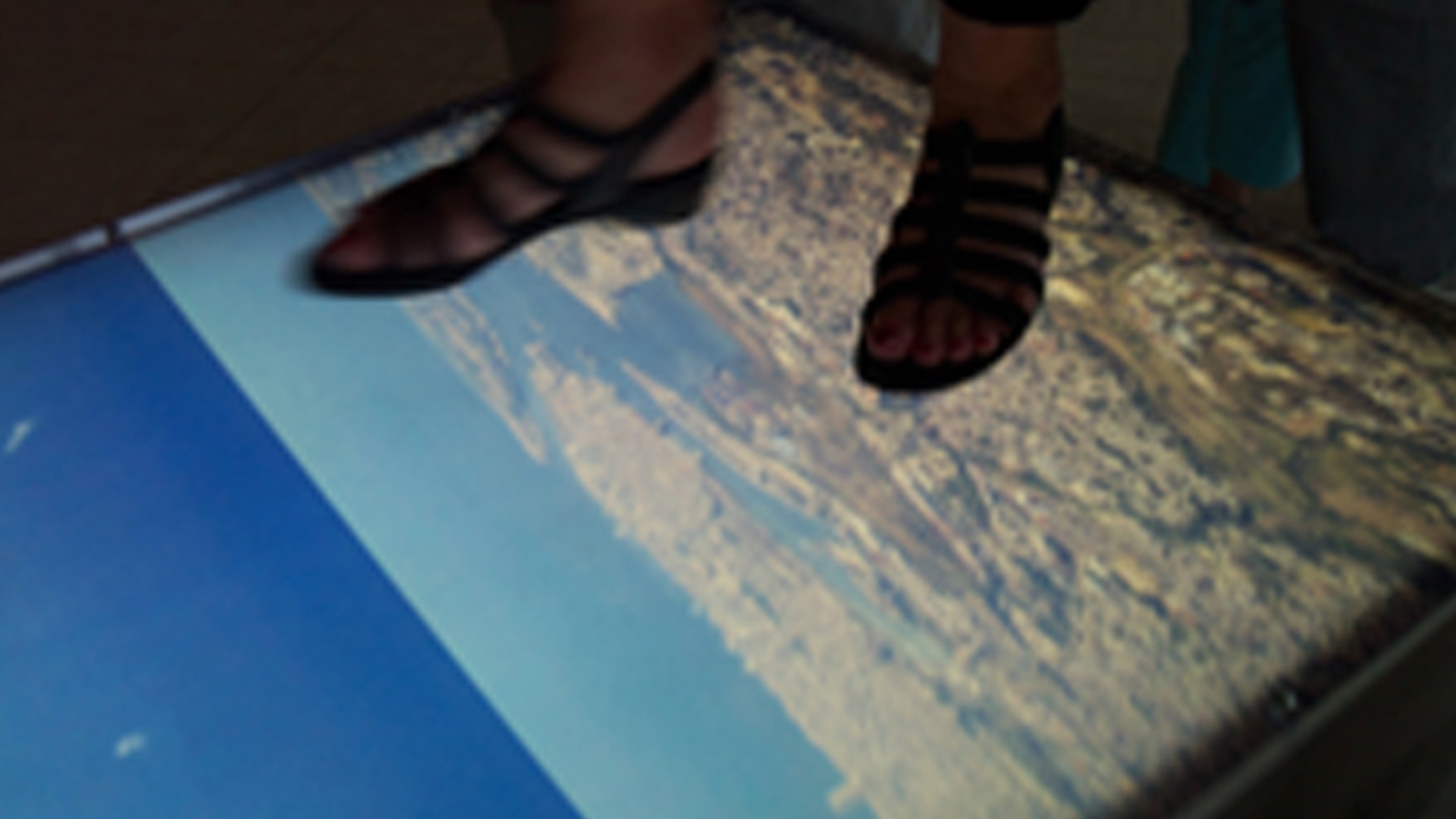 As the 11th Habana Bienal prepared to open earlier this month, the Museo Nacional de Bellas Artes hosted the debut of two solo exhibitions: Abel Barroso – Cuando caen las fronteras (When the borders fall) and Sandra Ramos – Entre cercanías y lejanías llevadas a cabo (Between nearnesses and distances achieved). The day before the shows opened, Cuban Art News dropped by for a chat.

The first stop was the Barroso show, where the artist and his installation team were putting the finishing touches on a gallery’s worth of new sculptures and two-dimensional works. Made almost entirely of inexpensive wood—Barroso’s material of choice for most of his career—the works address issues of immigration, foreign travel, and the sometimes insurmountable difficulties involved in crossing national boundaries.

Some of the pieces, like Visa Vending Machine and Mi casa es su casa, are wall-hung, two-dimensional pieces composed of various wood inlays, occasionally embellished with ink or paint. One, La historia contada por quien la cuenta (History as told by those tell it), is a map of the world filled in with the long, elegantly turned shavings from sharpened colored pencils, painstakingly produced by Barroso himself over the course of a week. Within the map, the color of the shavings in each section corresponds to the language group—Latin, English, German, etc.—spoken in that part of the world.

Perhaps more striking are freestanding sculptures like Visa Monopoly and Residencia Multiplé, a large, hexagonal birdhouse emblazoned with another map of the world. In this case, it’s a metaphor for the borderless world that Barroso envisions: “Birds don’t need passports, they have no borders. Here, they enter through a hole in one country and leave through another.”

According to MNBA curator Abelardo Mena Chicuri, who was also visiting the gallery, what distinguishes Barroso’s work is that “it’s not globalized art, but Cuban art with a global view.” Learning that Barroso’s main studio and workshop was in his home province of Pinar del Rio, not Havana, Mena Chicuri humorously described him as a guajiro globalizado, a “globalized” peasant or countryman. Barroso agreed. “I try to keep the origin of my place in the aesthetics of my work,” he said, “but the themes are universal.”

Barroso took a moment to introduce his father, whom he called “my secret weapon.” A structural engineer by profession, the senior Barroso has long helped his son design his artworks, and began working with him full-time when he retired two years ago. The elder Barroso’s expertise may be one reason the handmade wooden pinball machines in the installation Pinball del emigrante actually work—although, reflecting the challenges facing global emigrants, each of the seven games is notoriously difficult to win. (That didn’t stop visitors at the opening reception from trying their hardest, giving the sculptures a thorough workout.) As Barroso noted, the wooden skyline behind the games is not merely a cityscape, but another form of a border that a prospective emigrant must get over.

Pinball del emigrante has been acquired by Pan American Art Projects in Miami and will be presented as part of a solo exhibition at the gallery in late November, which will coincide with Art Basel Miami Beach. Art, as Barroso might say, often travels more easily than artists. (For images from the exhibitions and opening receptions, check the Barroso and Ramos photo galleries on the Cuban Art News Facebook page.)

Sandra Ramos was taking a late-lunch break when Cuban Art News arrived at her exhibition, but Corina Matamoros—curator of contemporary Cuban art at the MNBA and curator of both solo shows—was on hand for a chat and walk-through.

Where Barroso’s work is characterized by wry humor and a deliberate simplicity of materials, Ramos’s art, says Matamoros, takes a different approach. “There’s more nostalgia,” she observes, “but also more technology. The use of media, like digital photographs. The materials and the way of producing the work are more sophisticated.”

At first glance, two large artworks dominate the Ramos show. Outside the main gallery, 90 Millas (90 Miles) is a walkable bridge that marks the distance from Miami to Havana in a series of illuminated photo panels. At either end is an aerial view of one of the cities; between them are shots of the sky above the Florida Straits, recorded in ten-mile increments. The opening reception saw dozens of visitors making the metaphoric journey from one end of the bridge to the other.

The second large work, El punto cercano más lejano (The close point furthest away), fills a small gallery with a gigantic replica of the buoy that marks the southernmost territorial waters of the United States. A video system in the buoy projects a view of the United States on one wall; the opposite wall shows a view of Varadero, the Cuban resort area.

Other works in the Ramos show take what Matamoros describes as a “more interior, more personal” approach, focusing on the theme of the passport. For the installations Horizontes I and II, Ramos asked friends living abroad for their expired passports, then used them as the basis of the artworks, painting or otherwise embellishing them. “They’re all different, because they’re from different years, different eras,” says Matamoros. “She painted them in a style that conveys a lot of nostalgia, for the things left behind, for the dreams of an immigrant. And that’s the tone of the exhibition.”

Many pieces reflect the delicacy and attention to detail that characterize Ramos’s work. One of the painted passports, for instance, is embedded in the sand of a home-country beach. A seriograph of her own eyes is the basis for another series, Miedo secreto (Secret Fear), in which each repeated print is individually painted or decorated. “She would paint or stick on a passport,” says Matamoros, “or the island of Cuba. Or she’d draw a heart.” True to the exhibition’s theme, the catalogue itself took the form of a passport, which Ramos stamped for visitors at the opening reception.

In comparing the two artists, Matamoros points out that “Abel’s work is active, with humor. And analytic—he analyzes things. Sandra feels the experience. Abel is thinking globally, for all people. I think Sandra is thinking for Cubans in particular. That may be the difference.” Even so, the artists have a significant point in common: despite their shared focus on travel and emigration, and their growing international reputations, “they both live in Havana.”