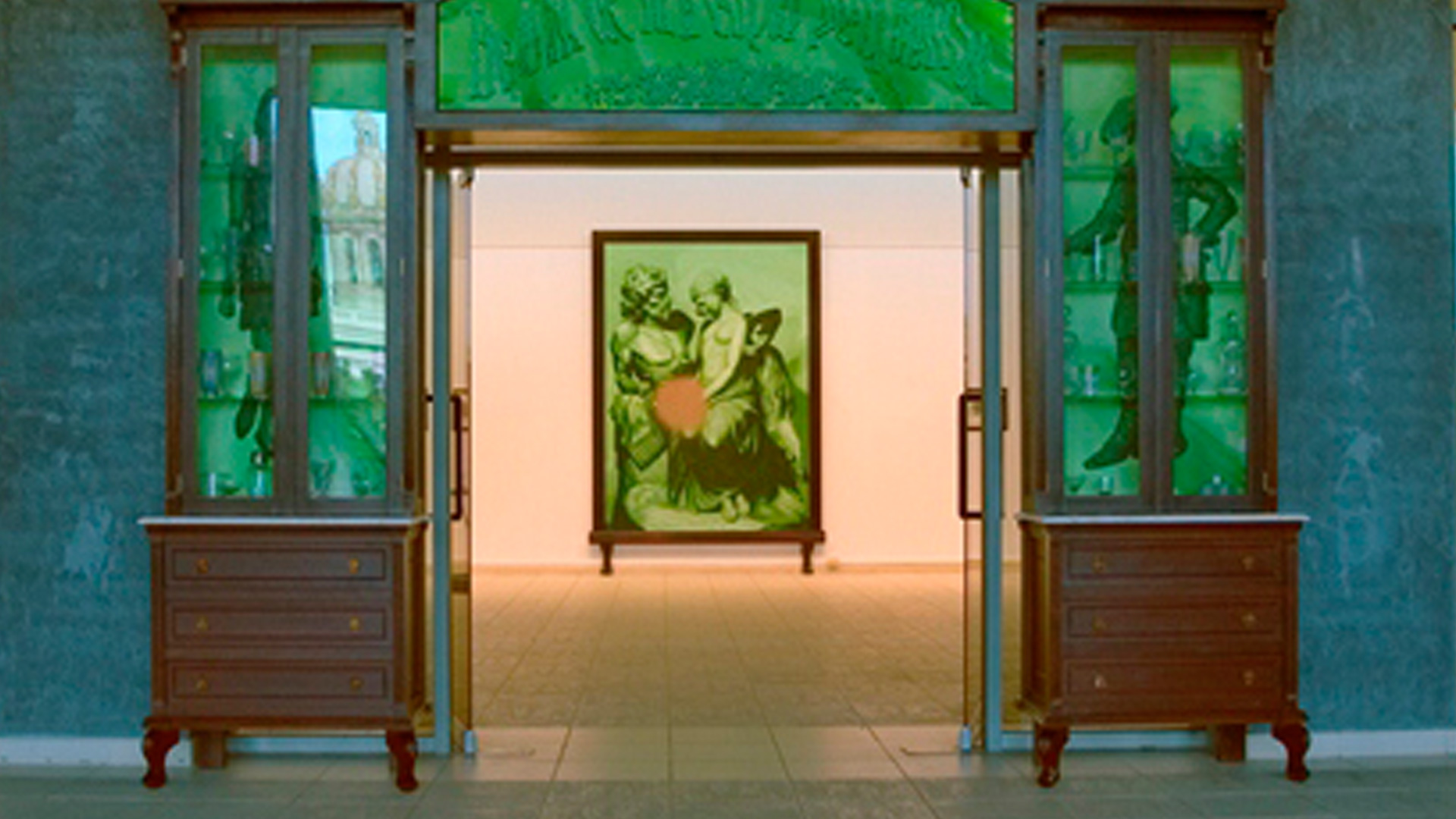 Described by the U.K. website Publishing Perspectives as a “de-facto digital library of Cuban culture,” the online journal La Jiribilla celebrated its tenth anniversary in 2011. Among its end-of-year articles was a detailed recounting of the year in art on the island. We are pleased to present this “2011 Visual Cartography” by Mabel Machado as a two-part series on Cuban Art News, where it appears in English for the first time.

Our thanks to the author and La Jiribilla.

The year 2011 saw significant milestones in Cuban visual arts. The 115th anniversary of Amelia Peláez´s birth prompted an homage to the Vanguardist painter at the National Museum of Fine Arts, which presented a wide selection of works from every period of her career. The centennial of noted caricaturist Juan David’s birth was celebrated at the 2011 Humor Biennial, held in San Antonio de los Baños. The centennial of Chilean Roberto Matta—linked to Cuba since the 1960s—was celebrated with an exhibition of “books-objects” by the artist, organized and presented by Casa de las Americas.

As in the exhibition dedicated to Matta, the 33rd Havana Festival of New Film recalled the late filmmaker Humberto Solás on the 70th anniversary of his birth, with an exhibition held at Gallery 23 y 12. The exhibition, which included such artists as Manuel Leal, Carlos Llobera and Pablo de Jesús Díaz, consisted of 12 works that reference film cameras, some of them used by Solás in three of his films, as well as photographs documenting the production of the film El siglo de las luces (The Age of Enlightenment).

The centennial of abstract art in Cuba was also commemorated in 2011. Abstract expression on the island, whose avant-garde was conceived in the 1930s, is represented by such artists as Marcelo Pogolotti, Amelia Peláez and Enrique Riverón, Sandu Darie, Carmen Herrera, Pedro Álvarez, the groups Los Once (The Eleven), Diez Pintores Concretos (Ten Concrete Painters), the Cuban Group of Optical Art, as well as Carlos Trillo, Julia Valdés Flavio Garciandía, Eliseo Valdés, Jorge William, and Rigoberto Mena.

In July, we celebrated the tenth anniversary of the reopening and expansion of the National Museum of Fine Arts (MNBA). At present, the main goals of the institution are maintaining its exhibition program and cultural outreach activities without interruption. In addition, the MNBA sustains two principal lines of inquiry: heritage research, to bring to light existing works in public holdings as well as pieces treasured in private collections; and the promotion of contemporary artists, especially those whose works are not currently displayed in the museum.

With those goals in mind, as the date of his birth anniversary neared, the museum opened the exhibition Felipe Orlando: Citizen of the World, the largest retrospective of the artist’s work to date. The exhibition surveyed Orlando’s career in 24 works from the museum collection and 11 from the Orlando family’s collection, which traced his development from his student days through the late 1980s. Among the works on view was The House of the Carolinas (1943), which, along with Retrato de Concha (Portrait of Concha) and Doble Retrato (Double Portrait), is among the most distinctive in the figurative period of this Cuban artist, who also worked in abstraction.

The show Nada (Nothing), by painter Carlos Quintana, was the first exhibition of his work in the museum’s Cuban Art building. His latest work may be seen in medium-format canvases, which address passions, rituals, and visceral atmospheres. Meanwhile, the show Hablando en Lenguas(Speaking in Tongues) put the audience in touch with the work of abstract artist Rigoberto Mena, a painter of the 1980s generation whose work is characterized by long processes of inquiry and experimentation.

The last of the Cuban artists whose work was exhibited at the museum this year was René Francisco. His presence in the museum since December 16 brought to a close the tributes paid to this painter and educator, who won the National Arts Award in 2010. Viejo verde (colloquially translated as Cradle Robber or Dirty Old Man) looks back at the artist’s first creative phase, during his training at ISA (the Higher Institute of Art), when the art of the 17th and 18th centuries were among his main referents. The founder of Pragmatic Pedagogy conceived the exhibition as a journey through all genres, both technical and thematic, that he has tackled in the course of his career, and as a reflection on the relationship between new and old, and between seduction and power.

Another of the MNBA´s major achievements, ten years after its reopening, is an increased contact with art from other countries, which over the past twelve months was seen in the opening of exhibitions like The Soviet Avant-Garde and Caravaggio and His Followers. The first, which opened during the summer, was drawn from the holdings of the Valencian Institute of Modern Art (IVAM), and included representative works from the flowering of Soviet art after the October 1917 victory. Alexander Rodchenko, El Lissitzky, Gustav Klúcis, Valentona Kulagina and Varvara Stepanova, among the ten artists represented in the exhibition, were influenced by the development of media and propaganda and explored concepts of suprematism, Constructivism, and Cubism.

The presence in Cuba of the canvas Narcissus by the Italian artist Caravaggio became one of biggest media successes and public events of the year. The Universal Art special exhibitions salon hosted the renowned painting by this Italian painter. The Ministry for Italian Goods and Culture, however, brought to the island an exhibition of a dozen works by painters who, until amost the mid-17th century, demonstrated the strong influence of an artist who had himself been part of no identifiable school.

On the topic of Italian art, but in a more recent variant, the MNBA also presented a solo exhibition by Ugo Nespolo, an artist linked to Pop Art, conceptualism, and arte povera. These paintings and videos revealed the transgressive tendencies of the artist, who made history with his 10-meter-long painting, The Museum, first shown at the Leghorn Museum in 1976.

A gift from collector Gilbert Brownstone brought to the museum works by artists who made history in the broader art world. This treasure, which Brownstone considers a suma of his intellectual life, includes pieces by Picasso, Duchamp, Calder, Lichtenstein and Warhol. It represents the largest donation received by the institution since its reopening in 2001.

Among the exhibitions of foreign art that came into the country this year is La distancia de la realidad(The Distance from Reality) by Yang Fudong, one of the most acclaimed contemporary artists in China, whose works have interested institutions such as MoMA’s Film at Gramercy Theatre program in New York and the Musée d’Art Moderne in Paris. In Yang Fudong´s videos and photographs, on view at the Havana’s Wifredo Lam Center, there is at times a certain escapist tendency, which can sometimes drift toward introspective attitudes, in which the aspirations of his generation in China are enunciated or deconstructed.

At the Center for the Development of the Visual Arts, the exhibition Cartographies of Creativity: 100% Valencian made a stop in Cuba. It was part of a tour that, sponsored by the Valencia Foundation for the Promotion of Contemporary Arts and Museums Consortium, promoted regional art outside the territorial limits of Spain. Works reflecting a wide variety of formats, techniques, and subjects represented artists who have been highly awarded at the national and international level, as well as talented emerging artists and new forms of art.

From Colombia came the exhibition Aurora by painter and sculptor Ana Mercedes Hoyos, among that country’s most prominent artists. The exhibition at the José Martí Memorial featured recent paintings that reveal a higher stage in the artist’s evolution, which has been marked by her anthropological studies and intense periods spent observing and living with communities descended from the African diaspora.

Nearly half a century of abstract prints by Manuel Felguérez were on view at the Casa de las Americas’ Latin American Gallery. Felguérez is known as a member of the generación de la ruptura—“the generation of the break”—in Mexico, whose formal and conceptual changes were highly influential in the 1950s.

The group exhibition Horizontes Insulares (Insular Horizons), at the Center for the Development of the Visual Arts, focused on representations of insularity as a concept in contemporary visual art. This gathering of works from different countries was preceded by the exhibition Islas, organized by the Atlantic Centre of Modern Art in the Canary Islands (CAM) in 1997.

The discovery of two new frescoes by Cuban painter Domingo Ravenet at the University of Havana Central Library was, without doubt, one of the most important events of the year for Cuban cultural heritage. Prometeo Encadenado (Prometheus Bound) and Prometeo Raptando en Fuego (Prometheus Abducted in Fire, both 1945), were hidden for 40 years under ceilings that had been installed in the facility. Domingo Ravenet, one of the essential figures of the Cuban visual arts vanguard, was linked to the Revista de Avance, the First Exhibition of New Art, and such artists as Amelia Peláez, Victor Manuel, Marcelo Pogolotti, Carlos Enríquez, and Eduardo Abela.

Meanwhile, Casa de las Americas revealed a new facet of the photographer Alberto Díaz (Korda) with his exhibition Bembé. Prepared in 1960 for a report for the journal INRA, with text by the musicologist Odilio Urfé, these photographs revealed Korda´s interest in Afro-Cuban religious traditions. It included photographs Korda himself had kept, which document different phases of a Yoruba ritual.

Punto y Seguido (To Be Continued), on view at the Villa Manuela Gallery, UNEAC, brought habañeros up to date on the visual arts in Cienfuegos. The show aimed at changing the perception that the capital has about art in the provinces, as being local production of limited interest.A broader and more systematic approach was demonstrated in Senderos (Paths), a group show by artists from Pinar del Río, which occupied the principal galleries of the Cuban Pavilion. Of exhibitions from this region presented over the past five years, this show was considered to be the most truly representative of the artists there. The catalogue pointed out that the exhibition concept “is modeled on the paths that emerge in creativity, with an emphasis on painting, either motivated by tradition or by the possibilities that the pictorial space provide for discussing a variety of issues.”

In a different presentation mode, and with activities that went beyond simple exhibition, the initiative De la punta al cabo y la Isla también, which has toured the Cuban provinces, brought together 11 artists led by Ernesto Rancaño. The painters have held workshops and meetings with local artists, and made visits to art schools and prisons.

Next: 2011 in solo exhibitions, art awards, publications, auctions, and international events on the island.

Cuban Art News thanks author Mabel Machado and La Jiribilla for permission to translate and republish this article.