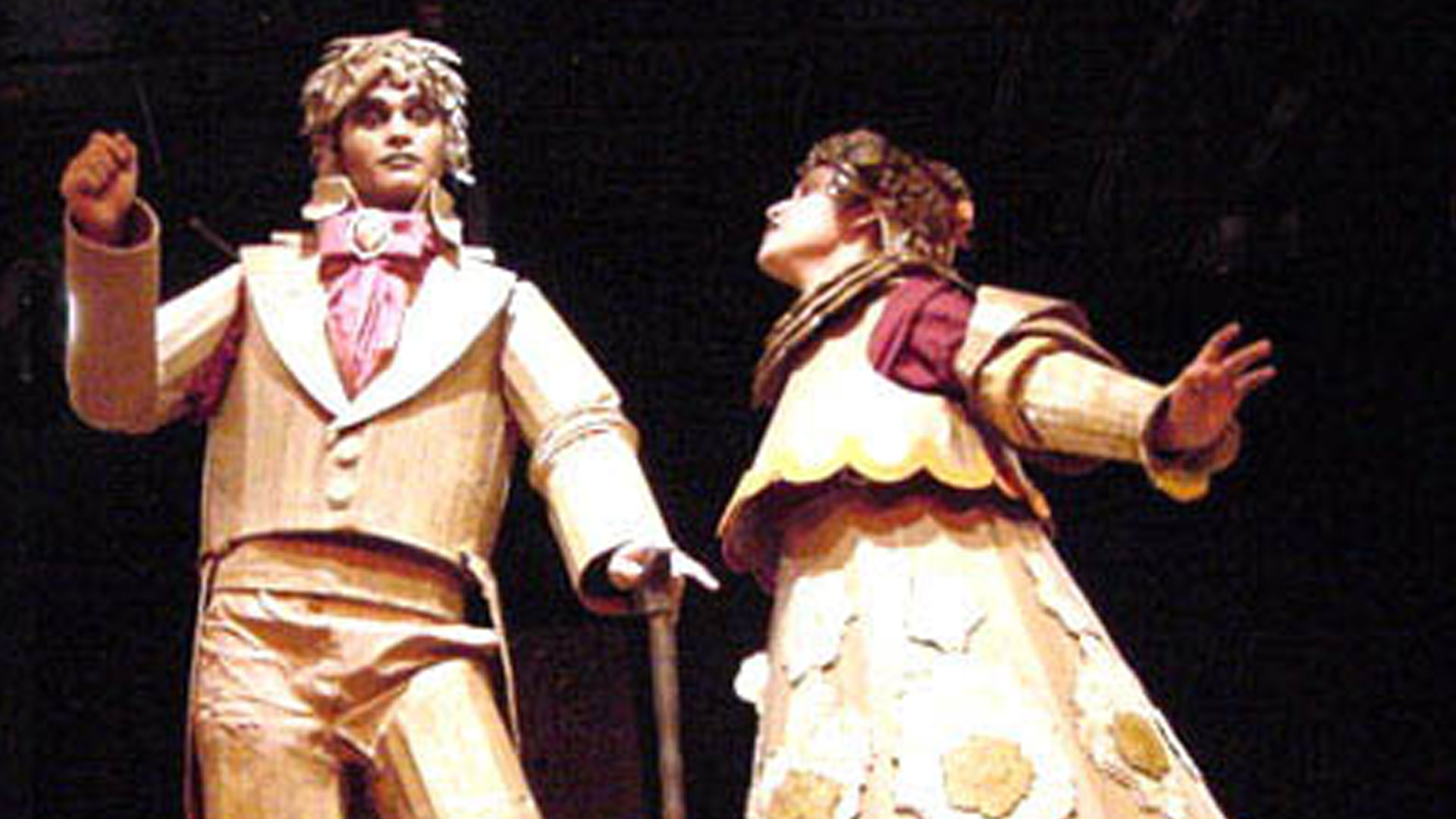 In the living history of Cuban theater design, no one can deny the leadership of María Elena Molinet and Eduardo Arrocha, or the respect with which they’re regarded. Both have earned many laurels and awards, including the National Theatre Prize. They represent the continuity of a tradition passed down from such masters as Andrés García and Rubén Vigón. For Arrocha, theater, dance, and cabaret are all familiar fields. Near the sea, in the east of Havana, he talked about his career, with the humility that often characterizes true masters.

Arrocha, your biography mentions that as a 24-year-old student at the San Alejandro Academy, you took a long trip across Europe. There, you enjoyed masterpieces that you’d seen only through reproductions. Did that revelation influence your decision to become a designer?

As the song goes, I have so many memories of this trip that they crowd each other out. Getting to know cities that I was somehow familiar with, such as Venice and Rome, was a real discovery. Being in front of a work by Botticelli was an indelible experience, and to this day I have a huge reproduction of Botticelli’s Florahanging over my bed.

But there was something more. I felt excited to be in a museum, in a palace, or on an avenue that I knew certain artists and so many other people had walked before. To go to the Prado and see icons such as Las Meninas by Velázquez, to imagine yourself standing in the same place where he could have stopped, are memorable experiences. Hearing a Mass sung in the Vatican, or visiting the city of Bruges to enter a little church and find a small painting by Michelangelo there. These are things that leave traces in your life as a designer and a human being.

If the impact of those great works was so profound, what happened to make you turn away from the intense world of painting toward and toward what was then a much smaller one: theater in Havana in the 1950s. What made you definitively become a designer?

This field didn´t seduce me immediately. I had returned from Europe. My father had built me a studio at home with plate-glass windows, like the ones you see in the movies or in La Boheme, and I came back thinking I would be a painter. I started to prepare the canvas, the oils, but suddenly something broke inside me.

And that was a good thing. I felt something else was happening inside me. Even at that early age I knew I wouldn´t become a painter. I did well with it, I received awards and recognition, but I had this feeling at a crucial age: 25 years old. At the time, fate acquainted me with Andrés Castro´s theater at Las Máscaras, where María Elena, my wife, was studying acting. It was she who asked me to design the decor for the end-of-the year party. Through intuition, and with two or three books on costume history, I reconstructed a bit of 1888 Paris in El sombrero de paja de Italia (The Italian Straw Hat.)

Andrés Castro was so pleased with those sketches that he exhibited them in the lobby of the theater. Andrés García, the group’s official designer, saw them and asked who the other designer was. They said, “He’s not a designer, he’s a painter.” And he answered with a succinct phrase that I always remember: “No, he is not a painter who can design, he is a designer who can also paint.” And so a career began that came to include designing for dance, ballet, theater, and variety shows, and continues to this day.

You had no previous experience in the stage design. Who, besides Andrés García, were your influences in those early days?

At that time there was a group of designers, like Luis Marquez, María Julia Casanova and Andrés, but I mainly owe my training to Rubén Vigón. He guided me from not only the artistic viewpoint but from the professional as well. He taught us what it meant to be a designer, to commit to an audience, and his ethics.

It was a whole approach that he passed on to us, a really broad vision. I hadn’t gotten anything like that at San Alejandro, except from Carmelo González, who taught me a lot about drawing, and Augustín Fernández, who gave me private lessons and helped me master composition. Portocarrero taught me to use colors, and it was he who told me: this disappears, that lacks feeling. I learned a lot from him.

And talking about masters, I have to mention Rafael Mirabal, one of the most brilliant designers I’ve met. I should also mention the duo Oliva-Fernández, Raul and Salvador, who were well established. I was always very aware of what they did, and whenever I had an opportunity, I showed them my work. Those were my influences, my reference points. We didn´t always share the same sensibility or style, but I felt great respect for them.

Rolando Moreno was a fellow student. He’s another excellent designer, based in Miami, with whom I always had a bit of a competition. I saw him recently. When we talked about that time with Vigón, he told me that he always worked hard to be the best, and ended up wondering why I had appeared. I did exactly the same, wondering why he had appeared.

Recent exhibitions have given people the opportunity to better appreciate your work. Your eye for detail is immediately evident, and the pleasure that you take in executing your sketches. Why the meticulous care? Why, from the sketch onward, do you insist on investing these drawings with your own personality, making them much more than a simple starting point for the creation of a costume?

Unfortunately, in Cuba most designers cannot express their work as they want to. There are many reasons for this: some don´t have prior training, having acquired their knowledge through working. At times there have also been great shortages of materials—we cannot make a detailed sketch if we don’t have adequate resources to create it. There is no need to use tempera or watercolors of extreme high quality, but they must be of a certain caliber to permit the full expression of your talents.

Most designers don´t care for the stage in the process that I consider so important. Those six years of academic training, plus the three previous years I’d spent in Guanabacoa, my home town, very much influenced my attitude as designer. This helps in the composition, in the drape of the cloth, in achieving a foreshortened effect, and it gives you the ability to characterize a design. I’ve worked with directors who commented that in my sketches you can already see how the costume or the set design will be, because there are those who can read the future of the sketch even in the most awkward notes of a designer.

I have been told that, but I wouldn’t know how to do it any other way. Even the projects I’ve taken on out of financial need, I can’t simply do mechanically. After the first sketches—which are done in a flurry, to get them out as quickly as possible—I have to begin finding my own way of conceiving the image. I’ve been working like this for fifty years, and it seems I haven’t done too badly.

Recently, Ramiro Guerra exhibited photos, designs and programs of the time he was at the helm of the Modern Dance Group (1959-1971). There, your sketches for his choreography came to light. In those designs you experimented with Pop Art and other contemporary trends, setting aside your taste for the Baroque and Renaissance art. How can Eduardo Arrocha be all that, and never lose his identity?

I have tried to not let myself stagnate. I identify with the Renaissance and Baroque periods, not only for their opulence, but as a concept, and they have been so important for me. The study of those times has been essential. So I decided to design a Giselle set in the German Renaissance.

Two months later I had to do a work that took place in a Havana solar (tenement). I knew I could put these ballet images into a drawer, waiting for the moment when they could be useful again. And I undertook this new project for the Teatro Martí, which could be done with the same diligence that I used in approaching the Renaissance. For La Chacota, I went with an excellent photographer, camera in hand, walking thorugh the solars of Havana, looking for interesting things for my staging. And today these images are a documentation, a reference, for the city.

The Baroque is always present in my work. Ramiro Guerra was one of the few men of theater, who, before starting a project, conducted serious and comprehensive research. At that time Ramiro projected the “Ten Commandments of the Apocalypse,” and we lived the pop world, a world of hippies. We consulted many images. Now I see and I say, in the 1970s I was looking forward. It´s amazing to see how all this has made it possible to talk about the style that characterizes my work today.

For fifty years, you have earned the respect of technicians, artists, stagehands, everyone in the theater. You’ve designed and created worlds with cloth, gauze, and even cardboard, such as in Escándalo en La Trapa (Scandal in La Trapa). What is the secret of your tireless and versatile personality?

Curators at the Raúl Oliva gallery say that, according to their statistics, I have designed more than 460 productions—if that’s not a record, it’s a good average. I think that giving every project your all, putting into it everything one is and has been, is essential. Just so that what we do actually looks like us. Perhaps it is due to that sense of commitment that I have earned the love and respect of many actors, dancers and technicians. I can not betray myself. Whatever I do, I show what I am in every sketch. So I have made those designs with cardboard, which is not so flexible, as in Escándalo en la Trapa. And I’m still doing that, getting ready for everything to come.