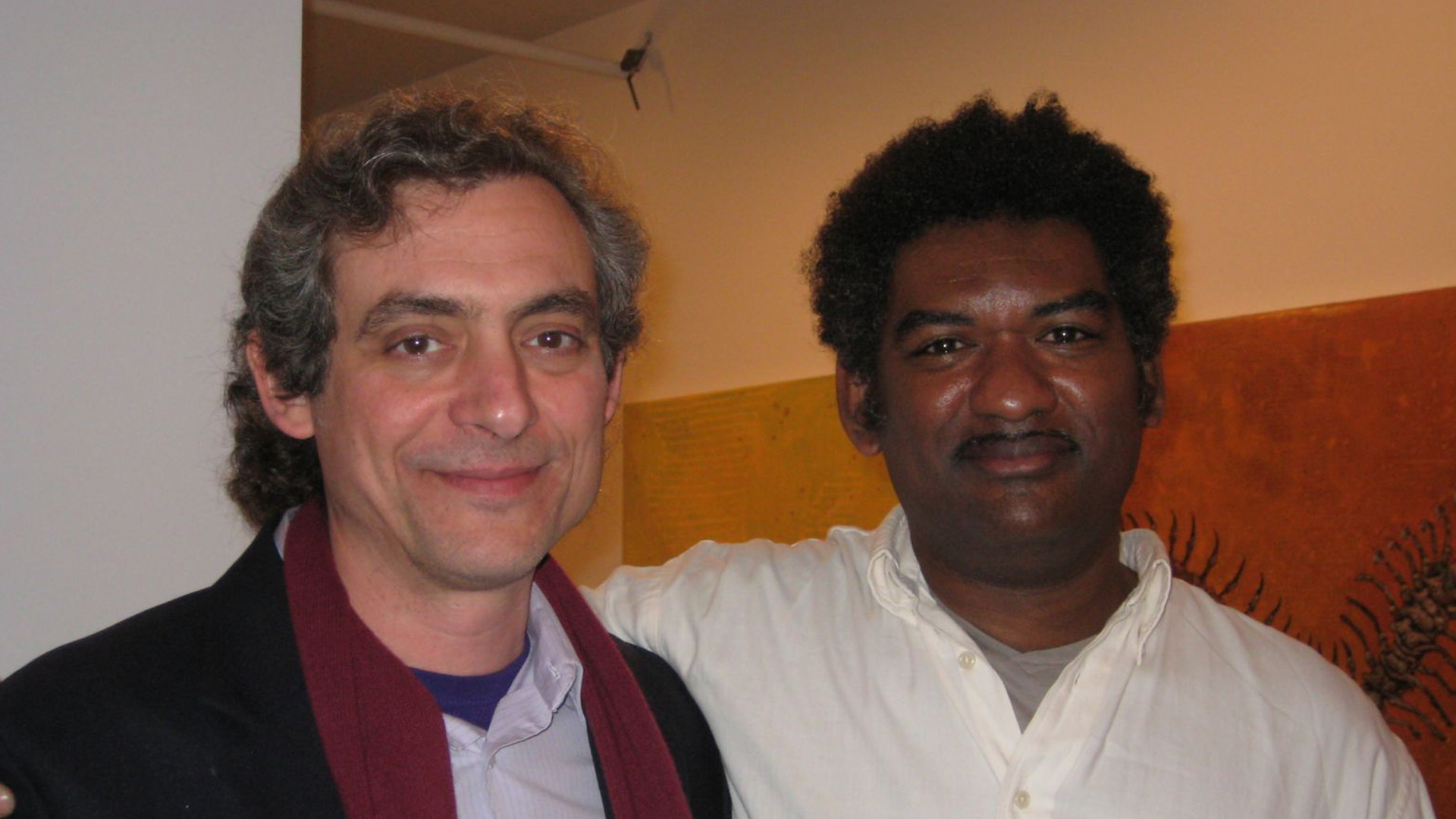 Alejandro de la Fuente, a professor of Latin American and Caribbean history at the University of Pittsburgh, and artist Elio Rodríguez Valdés are the co-curators of Queloides: Race and Racism in Cuban Contemporary Art, which recently opened in New York at The 8th Floor gallery. Cuban Art News caught up with the curators in two separate interviews, combined here in a conversation about the exhibition and contemporary Cuban art in general.

Cuban Art News first covered Queloides about a year ago, when it opened at the Wifredo Lam Center in Havana. Then we wrote about it again when it opened at the Mattress Factory art center in Pittsburgh. So our readers are probably familiar with its recent history. But perhaps you could give us a quick overview of the exhibition’s background—where it came from, conceptually speaking.

Alejandro de la Fuente: Queloides is a long-term collective project in Cuban art. It’s not a project that belongs to me or to Elio, or to any of the artists who are exhibitng now. This is a project that was born in the late 1990s. The first exhibition was curated by Alexis Esquivel and Omar Pascual Castillo. It was a modest exhibit, in 1997, at Casa de Africa in Havana. It got very little press coverage, and very little recognition. Then there was a second, bigger exhibit organized by the late Ariel Ribeaux Diago in 1999. Ariel Ribeaux began to expand the project—gave it additional theoretical coherence. And then of course Ariel Ribeaux died a few years later and the project got suspended. Nothing else happened.

When I learned about these exhibits, the first thing that caught my eye was how little information was available about the exhibits themselves, and about what I saw as a very important movement in Cuban art, and in Cuban culture more generally. But the exhibits have been ignored—and continue to be, actually—in the annals of Cuban art. If you look at the best books of Cuban art, you’ll see that in most cases the exhibits are not even mentioned.

Therefore, I thought it was important to create a new exhibit, to give new life to this project, which really has one central shared concern: issues of racial equality and racial justice.

The last exhibit had taken place in Havana in 1999. In the year 2007, I organized a solo exhibit for Elio Rodríguez here in Pittsburgh. And we began to discuss the possibility of doing a new Queloides. This time, however, we wanted to make sure that this Queloides was remembered. One way to do that, of course, is to create a catalogue for the exhibit. And that’s something we decided to do. The catalogue not only serves to document this exhibit but tries to recover images from, and document, the previous two exhibits, so that those important moments are not lost and can be remembered and studied, and so that people have access to some of the work that these artists were doing in the late 1990s.

Elio Rodríguez: Queloides is not only a show. It’s a brand. And it doesn’t belong to Alejandro or me. It belongs to everybody who wants to do something good related to the topic. I know that in the future, Omar Pascual will do something on his own [on this subject], because I know he wants to. And that’s the point—it’s the kind of project that can be approached from many different points of view. We can use the brand of Queloides to keep talking about the subject.

The show just opened in New York, where it runs through mid-July. What comes after that?

Alejandro de la Fuente: We are looking at other venues in the U.S. and South America. Nothing is firm yet, so I don’t want to make announcements that may raise false expectations.

Elio Rodríguez: We are very excited, but we have to wait until, I think, September. We are still a ways from [firming things up]. But we hope to have something settled by September.

Alejandro de la Fuentes: I want to keep working on Queloides as an ongoing project in Cuban art and culture. I think we need to start looking at younger artists who are beginning to deal with issues of race in their work, and have not been part of the project before. They should be invited to participate in a future Queloides exhibit—of which I’m sure there will be one, and hopefully more.

The basic idea behind Queloides is that there is a need to talk and publicize and to debate issues of racism and racial inequality. I think that that need is not going to disappear in the next few years, not in Cuba or anywhere else. These are not issues that are solved easily. This sort of scar on the Cuban national skin will not disappear, and Queloides can make a contribution to that. But in order to keep this going as an ongoing, viable cultural project, we need to open it up to new voices—younger voices, younger artists.

Elio Rodríguez: We’ve already begun to think about the next one. [With Queloides,] we are in a position to help younger artists—artists who live in Cuba and outside Cuba. At some point, we could even make something more international. Because this is a subject that doesn’t belong only to Cuba.

But I think it would take, maybe… five years to make [the next Queloides]. We’re still working on this one. We’re already talking about which artists might be in [the next exhibition], and the kind of things we would like to do with it, but I think it’s too early to really talk about it.

Do you think that the current version of Queloides has had an impact on contemporary Cuban art?

Elio Rodríguez: That was our goal, in a way. But the effect a project has can depend on the all-around situation. And in Cuba, this depends also on the government and the media. There is, we might say, a conversation that sometimes is not possible. We made our best [effort] in Cuba. But there is the other part [of the situation] also. Havana was not as good as we would have wanted it to be. It was good, but it could have been much, much better, in terms of promotion and in terms of the dialogue with the institution. I think they were afraid of what our purpose was with the show. It was as if we were talking on different levels, and couldn’t relate.

So the show was presented but it didn’t get much coverage?

Elio Rodríguez: I think almost nothing was reported. But regardless, if the project keeps moving ahead, its echoes outside [Cuba] will help in some way. Some people will start to see the work in a different light.

I think its main contribution is to showcase the work of a group of artists who have been working on issues of race and racism since the 1990s and who in many cases have not been recognized as an important group, even though many of them individually are appreciated and are recognized as important artists. What this Queloides does is to create a space for these artists as a group around this important topic in Cuban art. I hope that that will help correct the silence around those previous exhibits and around this issue in general in most accounts of Cuban art.

How would you describe the current state of contemporary Cuban art, on the island and elsewhere?

Why do you think that is?

Elio Rodríguez: This is a very personal perspective, based on the the few weeks [at a time] that I’ve spent in Cuba. [Rodríguez now lives in Spain.] For me, it’s not like it used to be, with openings that drew crowds of people, and the big arguments that used to come up about the shows. Now, people are more cold. Everybody’s insulated in the studio, working. I think it’s because in some ways the relationship with the audience is not what it used to be. The country changed, and the situation changed.

And [artists working] outside [Cuba] are perhaps trying to insert their work into the local art markets where they are living. And that also makes people use more international subjects and media.

Also, in the 1980s and ’90s, there were a lot of big [exhibition] projects that used to be done. Now it’s difficult to do. I mean, a project like Queloides, it’s difficult. To focus on a Cuban subject in a big show, at this time, is difficult.

How does the installation of Queloides in New York compare to the previous versions in Havana and Pittsburgh?

Elio Rodríguez: This is very close to the one in Havana. The space here is like that space. So what you see here is what we would have wanted it to be like in Havana. The work looks really good, and we’re quite happy with the way it’s hung.

Elio Rodríguez: The promotion we couldn’t do [for Queloides] in Havana, we are doing here. The ¡Sí Cuba! festival is a wonderful moment to make the show.

Alejandro de la Fuentes: Queloides has always been a collabative project. That continues to be the case—it is now a collaborative project that involves institutions and partners not just from Cuba but now from the U.S. as well. All these partnerships that have been created, I hope will continue to function as bridges for other projects of Cuban art in the future. If that happens, I’ll be a happy man.