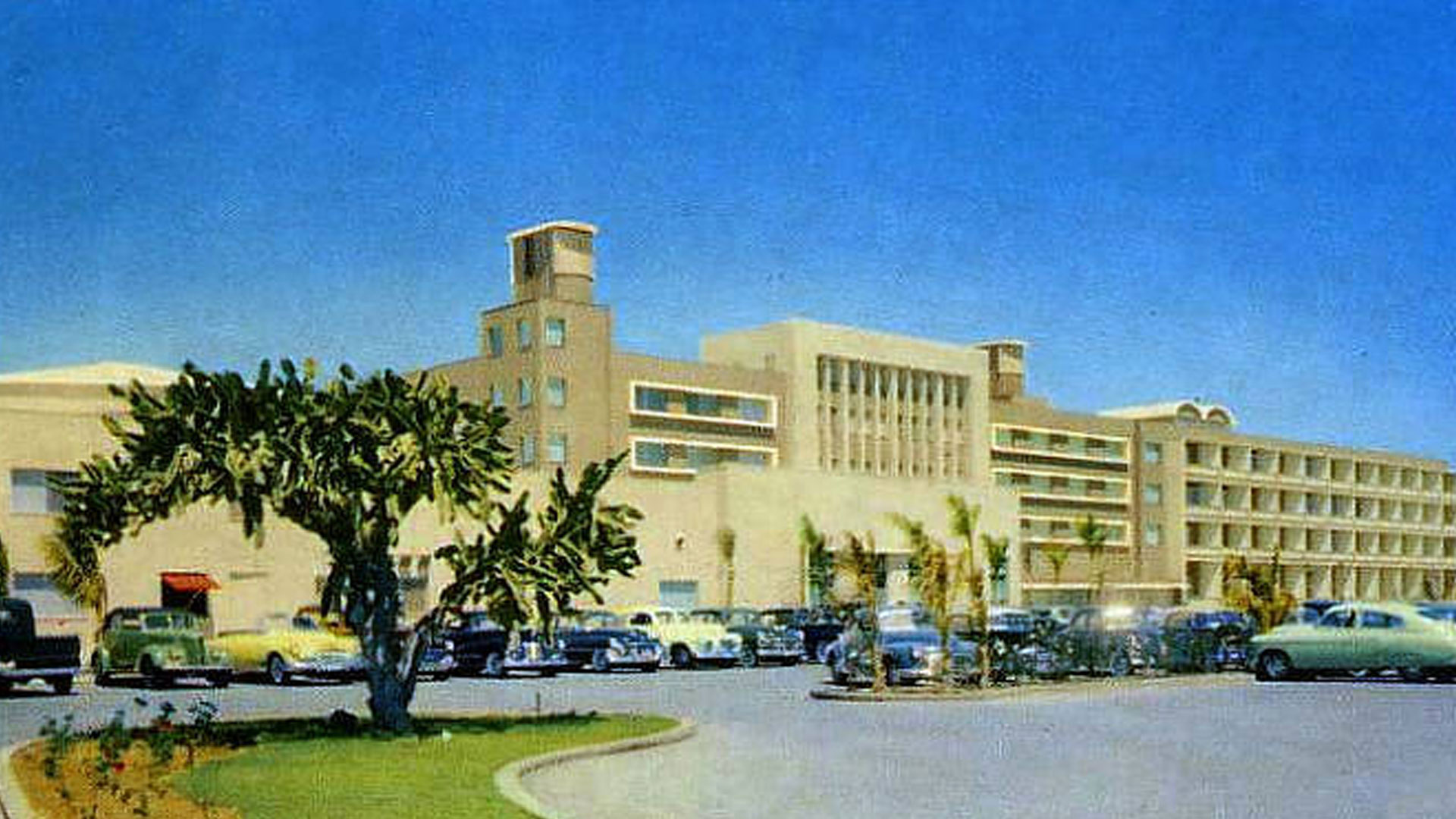 The Hotel Internacional in the Cuban resort town of Varadero first opened on December 24, 1950. Designed by architects Ricardo Galbis and Vicente Llanera, its construction took two full years, from January 1949 to December 1950. It was built by the Mira and Rosch Company, which also erected the Hotel Jagua in Cienfuegos and Hotel Comodoro in Havana. Very close to the Hotel Internacional, the Cabañas del Sol hotel was built in 1957, designed by architects Moenck and Quintana as an icon of Cuban modern architecture.

With its 161 rooms, the Hotel Internacional was an immediate showpiece of Cuban tourism. In the aftermath of the Revolution, it gained other historical connotations as well: on January 8, 1959, on his way to Havana, Fidel Castro stayed there. Later, during the battle at the Bay of Pigs, the hotel hosted young teachers participating in the Literacy Campaign. Until the 1990s—when Cuban citizens were banned from staying in hotels for international tourism—the building hosted thousands of people of humble origin.

On November 18, a message about the World Monuments Fund/Knoll Modernism Prize, which was making the rounds of Cuban email networks, held a disturbing piece of news: a foreign company was planning to demolish the Hotel Internacional. This message triggered an immediate reaction. Architect and city planner Julio César Perez, who had just returned to Cuba after participating in conferences in the U.S., was straightforward in his statement: “To demolish a good building in order to build a ‘more modern’ one is a fallacy. We already know from experience that in reality, better ‘more modern’ buildings have not been built here in many years. It’s an embarrassment that reflects how the true nature and value of architecture has been completely disregarded.”

Added Fausto Martínez: “No one has ever proposed the demolition of the Hotel Nacional, or the Sevilla or Plaza hotels to make ‘more modern’ ones, because those buildings have always had their defenders. But that has not happened with this emblematic hotel in Varadero, which is such a well-known and prestigious landmark, both on the island and abroad.”In the days that followed, the announcement spread through Cuban and foreign email networks. Natalia Bolívar, ethnologist and author of Los Orishas en Cuba, said:” I was appalled when I heard that the Hotel Internacional in Varadero would be demolished or turned into offices. Here, indeed, we have ‘brainless people’ who know nothing about history or culture, and so don’t care about them.” Many poets, writers, journalists, art curators, and actors such as Guillermo Rodriguez Rivera, Rogerio Moya, Felix Contreras, Abelardo Mena, Tomás Fernandez Robaina, David Camps, Alden Knight, and Armando Fernandez supported Natalia’s opinion. All questioned the authority of the Ministry of Tourism to undertake a decision like this one, concerning a building so symbolic of Cuban culture and history.

On the informal electronic networks, even the latest call by Cuban President Raul Castro to debate the topics to be discussed in the upcoming Cuban Communist Party Congress hadn’t caused this degree of reaction—an indication of the importance that the Internacional and Las Cabañas del Sol hotels have for many people.

As early as May 28 of this year, architect Maria Victoria Zardoya, vice-president of the work group for Docomomo-Cuba, the Cuban committee for the protection of Cuban modern architecture, sent a letter to Nilson Acosta, executive secretary of the National Commission of Monuments (National Council of Cultural Heritage), which closed with the statement: “We request immediate emergency actions to halt such a decision, which could have extremely negative and irreversible consequences for Cuba’s modern architectural heritage.”

A few days ago, Docomomo-Cuba emailed a detailed dossier about both buildings. About the Hotel Internacional, the dossier stated: “It is distinguished by its modern design in line with the best touristic architectural trends at that time, the expression of the values of the Cuban architectural culture assimilated by modernity, and an excellent visual integration with the beach, among other merits. It is part of Cuban cultural and historical heritage.” The dossier called Las Cabañas del Sol “a milestone for the history of Cuban architecture due to its aesthetic and functional values. It is an example of creativity and conciliation between international influence and the legacy of our architectural tradition.”

In the exchange of email messages to date, none has been issued by the Ministry of Tourism, the agency primarily responsible for hotel investments. But others have noted that the proposal to demolish these two facilities was characterized by irregular procedures that, while common, have been strongly criticized for quite some time. “I was told,” wrote the prestigious architect Mario Coyula, “that the planner for this project is a U.S. architect who has designed various hotels in Cuba, none of them memorable. There are many run-of-the-mill architects here,” he continued. “There is no need to import them and pay them as if they were star architects.”

In this, Coyula referred to a longstanding practice in Cuban architecture, prevalent even during the last years of the Batista dictatorship: projects by foreign architects must be executed by Cuban designers. But with the hotel boom of the 1990s, this informal rule was broken repeatedly by the Ministry of Construction and Tourism, with many hotels built by foreign professionals who ignored such important factors as aesthetics, climatic conditions, and the cultural traditions of the island.

In his article “Will the Hotel Internacional Survive?” Roberto Fernandez wrote about his visit to Varadero, where he interviewed the local authorities. There, he discovered the “(Taliban) intentions of the Ministry of Tourism also include the Hotel Kawama and the Mediterranean restaurant, both of them built during the 1950s.”

On November 23, architect José Fornés, president of ICOMOS-Cuba (the Cuban chapter of the International Committee on Monuments and Buildings), distributed a letter recounting the complaints presented, since May, to the Ministry of Culture and other authorities about the proposed demolitions in Varadero. “Throughout the world, the rescue of so-called “historic hotels” has been promoted repeatedly, each time with greater force, as a special category in cultural and economic terms. Considering the successes in this regard here in Cuba (hotels in Old Havana, the Great House in Santiago de Cuba, etc.), it appears to us counterproductive to waste the potential of this situation. The demolition of these buildings, which can be renovated and restored, carries a material cost that the country cannot afford. In the long run, restoration is much more economically advantageous.”