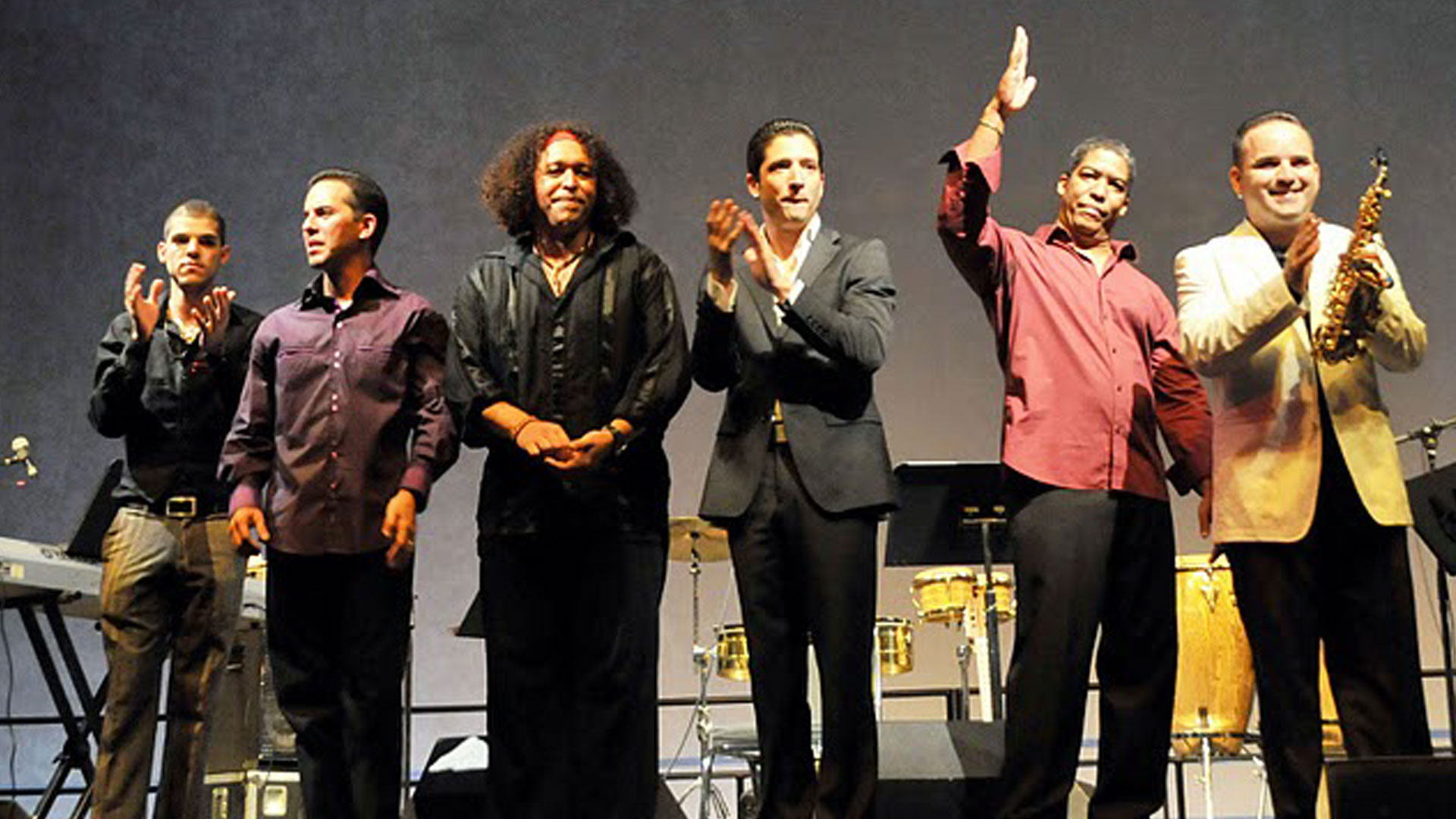 With its marble floors and soaring glass roof, the Winter Garden at the World Financial Center is an elegant, slightly chilly public space, befitting the international corporations that are headquartered there. It’s not necessarily the ideal place for the rhythms of Cuban music. But that didn’t stop an overflowing crowd from dancing, clapping, and singing to the music of Tiempo Libre (Free Time) and guest artist Julito Martínez.

Presented as part of Lower Manhattan’s annual summer-long “River to River Festival,” the free concert on August 4 was a mix of sizzling, high-energy Cuban timba and the slower, more seductive rhythms of son and trova. At times, Martínez took center stage for a solo; at other times, he stepped to the side while Tiempo Libre took over. At the opening bars of traditional favorites like “Dos Gardenias” and “Lágrimas Negras,” murmurs of recognition swept through the crowd as older couples gracefully took to the dance floor. Then the group would shift into timba mode, lifting the audience from their seats with the infectuous, nonstop rhythm. A second free concert the following night, presented outdoors in a nearby park—featuring guest drummers Román Diaz, Pedrito Martínez, and Marvin Diaz and billed as a “Tremenda Rhumba!”—was, if anything, even more high-voltage.

The seven members of Tiempo Libre were originally trained in classical music at the leading conservatories in Havana: La ENA (Escuela Nacional de Arte, the National Art School) and La ISA (Instituto Superior de Arte). “You start at age 5, and you spend 15 years,” explained Jorge Gomez, the group’s musical director and pianist. But the conservatory wasn’t the only influence. “At night, we’d go home and there’d be rhumba on every street corner,” he recalled with a smile. “And at home, we played the music of our grandparents, the cha-cha-chá.”

Both influences are reflected in Tiempo Libre’s recording history. In addition to industrial-strength timba on CDs like “Arroz con Mango” (“Rice with Mango”—a slang expression for something out of the ordinary) and “Lo Que Esperabas” (“What You’ve Been Waiting For”), last year the group released “Bach in Havana,” a fusion of Bach and Afro-Cuban rhythms with guest tracks by Cuban-born musicians Paquito d’Rivera and Yosvany Terry.

Gomez admitted that he’d had this approach to Bach in mind “since I was a kid. At the conservatory everyone has to play Bach. It’s obligatory.” At the same time, he explained, “Bach is one of the most popular composers of all time in Cuba. His melodies have a lot of the rhythms we need to play Cuban music. It’s mathematical.”

“Bach in Havana” was Tiempo Libre’s first CD on the Sony label, and earned the Miami-based group its third Grammy nomination (for Best Tropical Latin Album). Tiempo Libre is tentatively scheduled to head back to the recording studio in December, with a new CD expected by summer of next year. Bach, however, is not on the agenda, and neither is timba. “We’d like to do something more traditional,” said Gomez. “Like Bola de Nieve or Benny Moré [renowned Cuban musician-singers of the mid-20th century].” For now, they’re waiting for feedback from recording executives. “We gave Sony a few demos,” said Gomez, “and we’ll see what happens.”

The conversation turned to the recent flow of cultural exchange between the US and Cuba, with Cuban musicians like Carlos Varela and Los Van Van touring the US and Americans like Kool & the Gang performing in Havana. “We would like to go to Cuba to play,” Gomez said, a little wistfully. Asked what it might take, he shrugged and smiled. “An invitation from there?”

Meanwhile, Tiempo Libre remains on tour through mid-October, with stops in typical US cities such as Terre Haute, Indiana and Richmond, Virginia. How does Middle America respond to timba? “Great. Fantastic,” said Gomez. “They’re there to discover. They’re not just listening, they’re dancing. By the third number, they’re dancing in the aisles.”