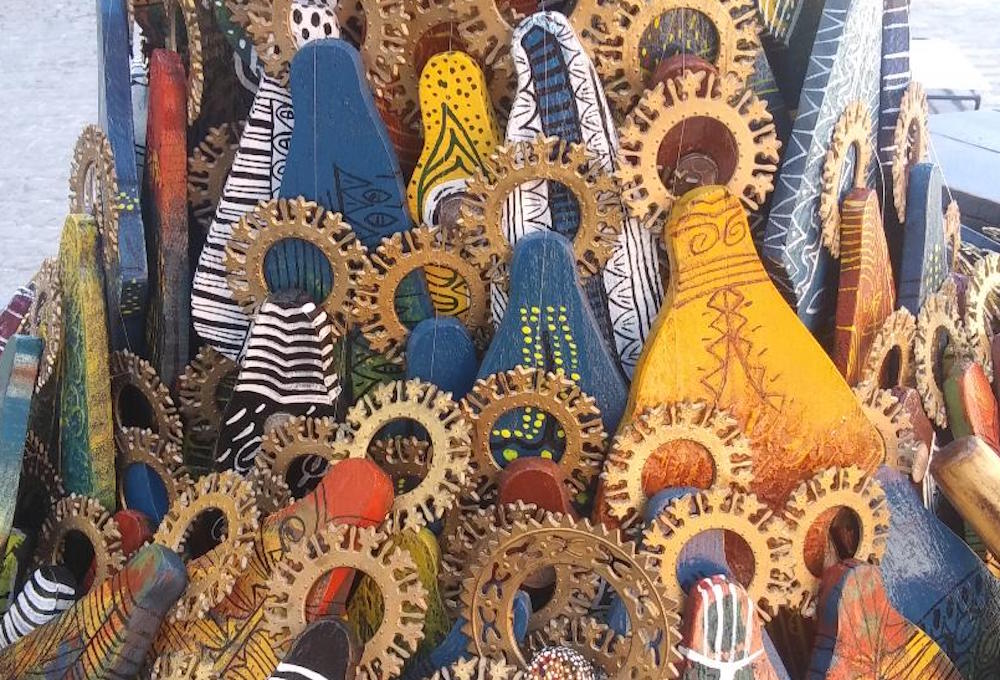 Since the 1800s, the city of Matanzas has been known as “the Athens of Cuba.”

“Matanzas is full of gifted and talented artists, poets, philosophers and other creatives,” María Magdalena Campos-Pons told the Vanderbilt University News, “but they have never received the global recognition that they deserve.”

As an artist, Vanderbilt professor, and Matanzas native, Campos-Pons is rectifying that situation with Ríos intermitentes. A project of the XIII Bienal de La Habana, Ríos intermitentes (Intermittent Rivers) throws an appealing spotlight on the creative community of Matanzas.

Campos-Pons is the founder and artistic director of the project, which she describes as “an integral artistic intervention that aims to build a vibrant city, taking into account its extraordinary cultural history, the geography of Matanzas and the tremendous traditions and heritage of the city.”

Located some 60 miles east of Havana, Matanzas is sited along two rivers and Matanzas Bay, and was for centuries a hub of the island’s sugar industry.

With exhibitions and interventions throughout the historic district, Ríos intermitentes brings generations of Matanzas artists together with international artists, including artists of the African diaspora.

Ríos intermitentes is headquartered in the former Palacio de Justicia, which is currently the office of the Conservador de la ciudad. The building also serves as the project’s main exhibition space, presenting works by more than a dozen artists.

Matanzas artists with works on view there include respected elders like Lorenzo Padilla and graphic artist José Ramón Chávez, and younger artists like Jorge Y. Salomon and Claudia Padrón.

In this building, Matanzas sculptor Agustín Drake is presenting Objects and Fantastic Animals, a room-sized installation combining found objects and metalwork. “It is a sculpture that makes use of junk,” his artist statement reads, “to compose images where objects, despite articulating a new representation, retain their original personality.”

In the former Palacio de Justicio, Edwards’s sculptural installation combines a welded metal ceiling frame with diverse lengths of chain outlining a niche in the marble floor, connected by strands of barbed wire.

“With Ríos intermitentes,” Campos-Pons stated, “I seek to revitalize and heal the city through artistic gestures that will revive forgotten traditions.” The intention, she said, is to “empower the community and help it to renew itself with a sense of cultural pride.”

That sense of purpose comes into focus most sharply in interventions that converge on and extend beyond the project’s headquarters.

For his project Sábanas blancas: Transparencia, 2018–2019 (White Sheets: Transparency, 2018–2019), Matanzas photographer Ernesto Millán purchased 31 bed sheets and screen-printed them with unique photographic images. He then gave each sheet to a family for a specific time period, asking them to document their use of it in cell-phone photos and videos.

He then collected the sheets, which currently hang in different locations in the historic district (including the Palacio de Justicia). He transformed the families’ documentation into a short video, which premiered the first week of the Biennial, with many of the participating families in the audience.

Calle Narváez, the promenade along the San Juan River, is the site of several open-air sculptures, including Banco (2017) by Matanzas artist Pedro Luis Cuéllar and Ofrenda (2018) by Agustín Drake.

One of the simplest but most suggestive interventions along the river is Contrahuella. Intervención urbana (Counterprint: Urban Intervention) by architects Rubier Bernabeu and Wendy Pérez. The project features a series of colored ladders that give users access to the actual riverbank.

According to the artists’ statement, the work aims to encourage the “conservation of the tangible and intangible values of the area” between two of the historic bridges across the San Juan.

Largely sited in Calle Narváez, Contrahuella also extends to Calle Comercio across the river, which includes “the ruined warehouses and the fishing community that, without a doubt, are an indissoluble part of the identity of the river and the city.”

“With the stairs, the river is sewn together,” the architects conclude, “creating platforms for meditation and unavoidable connections for the future development of the area.”

Staged under the river bridge nearest the bay, the performance included a drummer seated on the malecón wall, playing with and responding to a group of santería drummers and singers in a boat on the river.

The boat journeyed out to Matanzas Bay before coming back toward the drummer on the shore, stopping to join him in a traditional performance—another way, perhaps, of sewing the river together.

The following Saturday night, April 20, Campos-Pons presented her own Ríos intermitentes project: Bar Matanzas, a space for meeting, performance, and celebration in the traditional Matanzas style.

Presented in the patio of the former Palacio de Justicia, it was similar to a project of the same name that she and her partner Neil Leonard presented at Documenta 14 in 2017.

Public performances and events in May include performances by the Danza Espiral dance company, poetry readings, a concert by the Matanzas Brass Ensemble, and tree-planting with students of Camilo Cienfuegos University.

Ríos intermitentes runs through May 21. Along with support from the Havana Biennial and the Wifredo Lam Center, the project has been actively supported by institutions in Matanzas, including the Provincial Cultural Director, the Provincial Council for Visual Arts, and an international curatorial team that includes Octavio Zaya, Salah M. Hassan, Annie Aguettaz, and Selene Wendt.