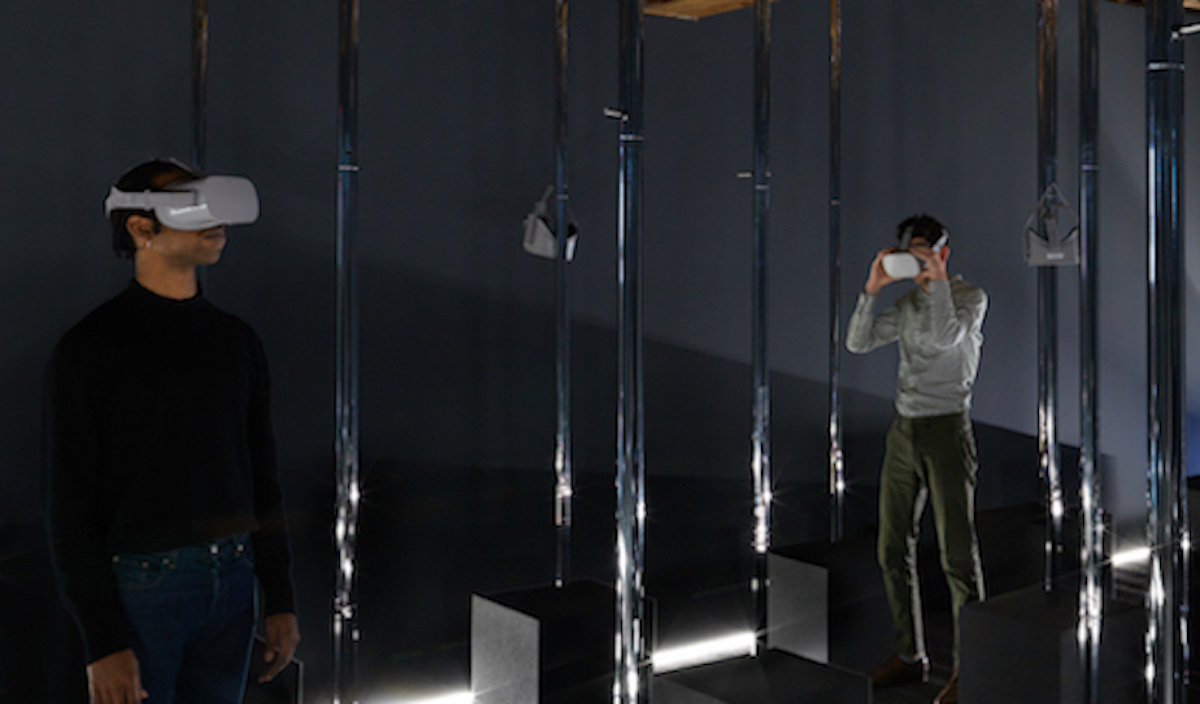 Cutting-edge technology may not be the first thing that comes to mind with Cuban art. But maybe it should be—given the questions it raises, and the possibilities it brings up for artists exploring the intersection between art and technology.

The project re-creates one of the last symbols of the ideological face-off between Cuba and the United States: part of a plaza that stands just beyond the US embassy in Havana, known as El monte de las banderas, the mount of the flags.

This space in Havana holds a flock of 138 65-foot-tall flagpoles, which were erected in 2006 as a memorial to Cuban victims of terrorism. Not coincidentally, the memorial went up soon after the US embassy—then the US Special Interests building—installed an electronic news ticker on its fifth floor, streaming messages that were visible to large numbers of habaneros. With flags flying, el monte de las banderas succeeded in blocking the message ticker from view.

In one VR video, titled The Year of the Horse, semi-nude dancers wriggle suggestively around the flagpoles, their dance evoking a sense of the porno-polítco of life in Cuba. In another, people throw pieces of cake at each other—an oblique reference, among other things, to the complicated history of the Cuban sugar industry.

En el monte is on view at Pioneer Works, an independent art space in Brooklyn, New York, where it runs through this Sunday, April 21.

The ten videos in the piece were filmed in Havana, New York, and Key West, Florida, using 360-degree cameras, with added 2-D video elements. To access the videos, visitors put on one of the virtual-reality viewers hanging from the metal, floor-to-ceiling flagpoles in the gallery.

Each viewer then has a full, 360-degree view of a virtual world; before the visitor’s eyes, ten stories unfold. None are connected, except by the context and the general issues they address.

En el monte took two years to complete. It grew out of the artists’ interest in expanding viewers’ sensory experiences, and is the first of their projects to incorporate 360-degree video as a a fundamental concept.

Together, Piñeiro Bello, Capaz, and Fabelo Hung are also known as the Havana-based art group Stainless, which they formed in 2010. At present the artists are prioritizing their individual careers, and have signed their own names to En el monte.

Pushing the limits comes naturally to the members of Stainless. From the start, the group adopted a deliberately explosive visuality, following the dictates of a kitsch aesthetic and global art-market trends.

Speaking with Cuban Art News, José Capaz said that as a painter, working with 360-degree video was for him the equivalent of Nam June Paik discovering everything he could do with television. “Once you put on on the VR glasses,” he said, “you consume space in a very different digital medium. It may seem quite real, but it’s also very digital and constructed—extremely abstract.”

En el monte opts for a dialogue between the physical and the digital, combining installation art with virtual-reality video. In that sense it’s a transitional work, and may mark the beginning of deeper, more exclusively virtual explorations in works to come.

“My new projects are a blend of painting and virtual reality,” said Capaz.

Beyond the dazzling visuality that En el monte aspires to, one of its strengths may well be its interest in posing new questions about Cuban art. To what extent does the use of this technology as an art medium lead to a new positioning of the subject within the digital space of the artwork?

Another artist from the island, Rodolfo Peraza, has similar but perhaps even more radical aspirations for digital realities in art. Founder of Fanguito Estudio in Havana, Peraza has developed several virtual-reality and game-art projects—not through the use of 360-degree cameras but in virtual environments created in computer programs.

In Peraza’s works, everything happens on the digital screen, accessed through a virtual-reality headset. The space that the viewer is exploring exists only on the screen, in that digital environment: in the physical world, the project’s only manifestation is the VR headset. His work points to the possibility of exploring a completely digital, constructed virtual space that the viewer interacts with and moves through.

“In my work there’s room for a playful element,” said Peraza, describing his interest in linking art and virtual reality. “The game—as part of the process of confronting the work, as the experience of the piece—was what brought me to the world of technology as a medium.”

Video-game aesthetics have had a strong influence on Peraza’s work, in that the viewer transforms the piece by the simple act of participating in it. In JailHead.com (available online), the user becomes part of the work when they access the page. Each player’s identity is the IP address from which they access the internet, and their presence is perceived by other users who, visiting the page, also inhabit that virtual space for a moment.

The collaborative dynamic is essential to Peraza’s work, and to Fanguito Estudio. That space was conceived as a workplace where he and other artists can meet to program computer works, in the style of a hackathon, then exhibit the results to the community.

For the Havana Biennial, Fanguito Estudio is presenting the work of 11 Cuban and international artists, including Peraza. The show, NPC: Non Playable Character, previewed this past Monday and officially opens this Friday, April 19, with an open studio at 5 p.m. It, too, originated with video games: NPCs are characters written into the script of a game, who are not controlled by real players but by artificial intelligence.

Peraza has found technology to be an important tool for expanding his creative scope and operating beyond the limits of a monetized art market. “Technology is very interesting for generating autonomy,» he said. «It allows me to concentrate on projects that really interest me and to not depend on the art system.”

“With technology we are experiencing a moment which, on the one hand, is dystopian and terrible,” he added. “But there are also many tools that can be used consciously to democratize art practices beyond the traditional art circuits, and can in some way differentiate us [as Cuban artists] from what most international artists are doing.»