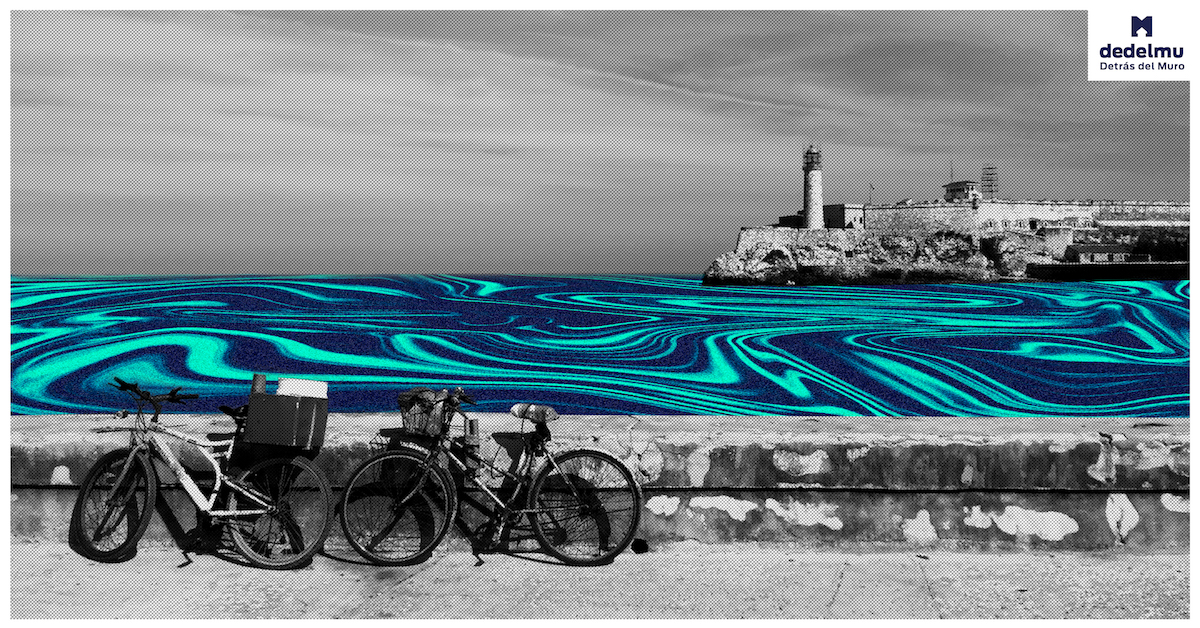 Since its debut in the 2012 Havana Biennial, the open-air art exhibition Detrás del Muro (Behind the Wall) has been a crowd-pleasing favorite among Biennial visitors and habaneros alike. In an email interview (edited for length), Detrás del Muro curator and producer Juan Delgado talked about this year’s edition and the project’s expanding role in the Cuban art scene.

How would you characterize this edition of Detrás del Muro (Behind the Wall)? What’s new?

This year will see the beginning of a new work direction for the Detrás del Muro team: the sociocultural project dedelmu. With dedelmu, we are no longer simply presenting an intervention on the Malecón during the biennials. We’re working to promote art, and to engage in dialogue and education with respect to the community.

So this edition pays more attention to the feedback between our project and the people, rather than simply inserting art in a public space. We’ll completely display what Detrás del Muro is—before, during, and after the event.

That is to say, it will be possible [for people in the community] to participate in the processes of assembling the presentation, to be involved in the actions we’ll be presenting, in the performances, the workshops—everything.

For this edition, dedelmu will be extended to new spaces near the traditional Malecón. This time we will also be sited in the Avenida de Puerto, the Prado, the Callejón de los Peluqueros, the Solar de La California, and the neighborhood of Colón.

Also, our exhibition doesn’t end with the Biennial’s closing on May 12, but continues to November as part of the celebrations for the 500th anniversary of Havana.

As of now, there are 71 artists from nine countries participating in the project—almost a third more than participated in the [most recent] 2015 edition.

About 40 international artists are part of the edition this year, among them the Peruvian American Grimanesa Amorós; Mexicans José Dávila and Javier Marín; Frenchman Laurent Grasso; and Spaniard David Magán.

Cuban artists of the diaspora are also an essential part of our exhibition—never forgetting that the founding essence of Detrás del Muro, and its very name [Behind the Wall], are about opening doors and windows in that wall. For this edition, Nereida García, Carlos Martiel, Juan Milanés, and Emilio Pérez will participate again, and for the first time they will be joined by Aimée Joaristi and Enrique Martínez Celaya, among others.

They are about thirty Cuban artists, mostly based in the island.

Tell us about what some of the artists on the Island are doing.

We have an impressive sculpture by Roberto Fabelo—a Dantesque form that draws our attention to the problems of daily life. Pedro Pablo Oliva will do an intervention at the Hotel Terrai, with a selection of bronze sculptures and paintings.

The performance by Jorge Otero is a suggestive invitation to concerts that are fundamentally natural. Also worth noting: projects by previous Cuban National Art Award winners, including Pedro de Oráa and Eduardo Ponjuán.

We’re also joined in this edition by Rachel Valdés, Duvier del Dago, and Arlés del Río. Ariamna Contino and Alex Hernández are making a site-specific work, Adrián Fernández will have an extraordinary sculptural piece, and Susana Pilar Delahante is presenting a performance.

José Ángel Vincench and Leonardo L. Roque will each do a mural, and so will Pablo Rosendo. Ernesto Rancaño has a surprising installation, and Felipe Dulzaides is proposing a very accurate work. These are just a few examples.

Right now we are producing many ideas. The city offers a storyline, and our restless artists want to deepen it—providing visual accidents that have the capacity to soothe the gaze of the city’s inhabitants and seduce its visitors. It is not a matter of pure formalism but of paying tribute, making a contribution, of effort, consecration, and commitment.

Foreign artists, on the other hand, have presented projects directly related to our architectural and cultural context. We have light works, we have wonderful environments—new constructive spaces, murals, interesting community actions.

There is a background, a process of understanding, that is very well grounded. At the same time, there’s a different perspective on the world—fresher, more global, more unprejudiced. And that perspective nourishes us in unexpected ways.

I’d love to tell you about the works with that Javier Marín, José Dávila, and Laurent Grasso are bringing, but I want to save some surprises for the opening. I know those are pieces that everyone will want to talk about.

Many of the works from the previous editions had a participatory or performative aspect. Could you talk about some works in this year’s edition that use these dynamics?

The happy blue cube of Rachel Valdés, Fe by Adonis Flores, Magdalena Campos-Pons’s performance of “Llegó Fefa,” the workshop of Nereida García and Owenna Fogartti, among many others, are paradigmatic examples from previous editions.

But every work that we install on the Malecón is a participatory artwork—sometimes involuntarily.

This year, every one of the works exploits interactive participation as its main task, to one extent or another. They engage with strategies like site-specific installation, artistic intervention, architectural design, experiential play with spaces, and direct dialogue with the audience.

On the one hand, there’s Transfusión, the piece by Arlés del Río, which is active and playful in the best sense. On the other hand, the work of Grimanesa Amorós is an impressive, luminous installation that, in the final analysis, is a purely contemplative act. Between these two we have many forms of dialogue, including social workshops. In this edition, we’ll have seven of these experiences—on literary writing, photography, and art, among others.

Detrás del Muro works with a very specific context, full of vertices and vortices. The essence of our project this year is to investigate the context that gives us sustenance. Interactivity is not just play, flirtation, fruition, or provocation. It is primarily about negotiation, dialogue, common good, and sustainability.

Tell us about the Cuban American artists who’ll participate this year.

The fact that Emilio Pérez is again with us and Enrique Martínez Celaya is becoming part of the dedelmu family is one of the greatest gifts that the third edition of Detrás del Muro has given me. I have no words to thank them and others, like Nereida García, Rubén Millares, and Antonia Wright.

The presence of Cuban American artists is a clear message that in art there are no geographical walls. Or if they exist, it is for the purpose of displaying work on, in front of, or behind them, depending on how you look at it.

Tell us about the theme for this edition: “Liquid Scenario.” How does it relate to the works that visitors will see?

There’s no one better than Elvia Rosa Castro—an essential part of the birth, growth, and existence of Detrás del Muro—to respond to this question, so I’ll use her words:

“The theme “Liquid Scenario” does not focus on the sea, as many will think. When it comes to Cuba—and even more so to our project—the sea is always latent, even when you try to go against it or ignore it. It is unavoidable. Right now it is, together with the sky, the exact dimension of the physical and symbolic space with which we work.

“Liquid Scenario” refers to two basic elements: the fluidity of the context-space with which we work, with its very intense and uncontrollable dynamics; and the fluidity that the presence of art in this space entails—the changes that occur in the web of works installed here, the vivacity that each work acquires here. No matter how static a work might be, in this context it unfolds before the viewer as a living process.

Is this the first time that Behind the Wall is an official part of the Biennial, not a corollary project?

Detrás del Muro has always had excellent visibility, partly because of the nature of our project and the success we have always had. In 2012 we were an official project of the Havana Biennial, and in 2015 we were a collateral project. In this new edition, we are an official Biennial project again.

On our website www.dedelmu.com, we have an informative and updated archive of our work. We invite you to visit us there, and on our official Facebook and Instagram pages.

We [at dedelmu] defend art as an opportunity to transform the way in which human beings interact in public space. Not for nothing have we been invited by the Office of the Historian of Havana to join in celebrating the 500th Anniversary of our capital. This will allow us to extend, in time and space, our gesture of gratitude towards this wonderful city. In addition, some of the foreign artists participating in our project have decided to donate their works to the city, which makes us very happy and proud.

There’s still much to do.