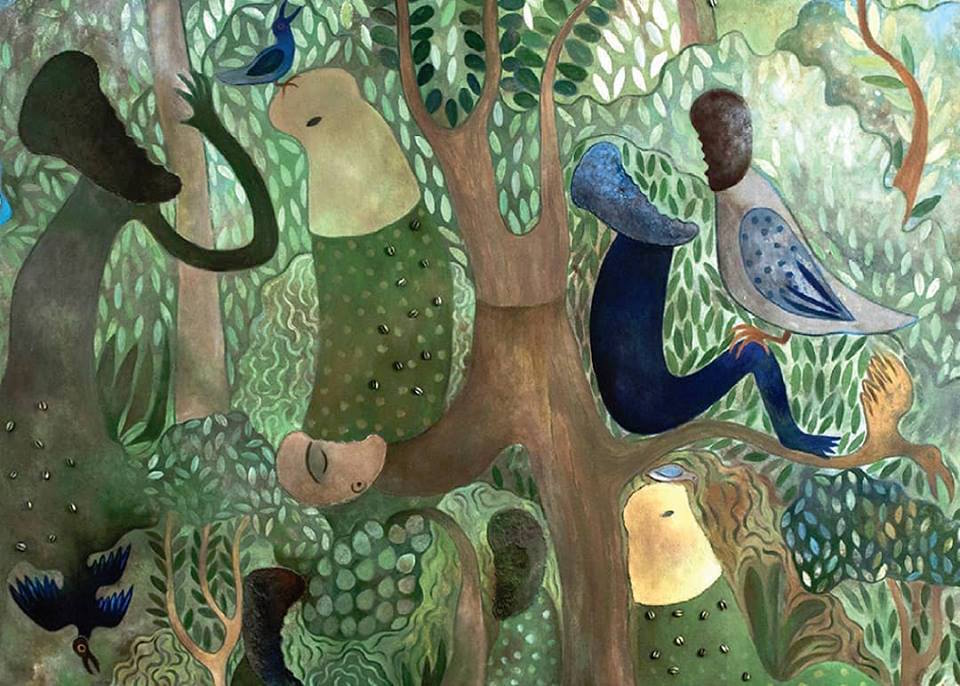 XXY at the Gran Teatro. Just opened last week, XXY, Humo y espejo (Smoke and Mirror) features 24 artists in the collection of the Consejo Nacional de Artes Plástica. Curated by María Carla Olivera, the show is “un llamado al Ser y a respetar al otro” (a call to the self and to respect others). On view into September, in the Sala Alejo Carpentier of the Gran Teatro de La Habana Alicia Alonso.

Diálogos y alianzas at Collage Habana. Galería Collage Habana and the magazine CubaPLUS have joined forces in an exhibition drawn from their collections. Featuring a cross-generation selection of artists, from Flora Fong and Manuel Mendive to Lidzie Alvisa and Carlos Quintana, the exhibition looks at shared influences and sources of inspiration. On view through August 30.

Opening Soon: Poblet at Galería Habana. What better way to beat the heat than to float away from it all? Mabel Poblet’s Flotabilidad / Buoyancy—a collaboration with Grammy Award–winning musician, composer, and producer Andres Levin—is slated to open on Friday, August 3. Combining video, sound art, and sculpture, the show kicks off with a 6 p.m. reception at Galería Habana.

Relatos íntimos at Galería Artis 718. This exhibition pairs photography by Daylene Rodríguez Moreno and US-based Charles Anselmo, who has made more than 24 trips to the island. From different perspectives, both artists tell stories of individuals, the spaces they inhabit, and the contours of their lives. Through August 20.

Mendive in the Bronx. The long-awaited exhibition Manuel Mendive: Nature, Spirit, and Body opens tonight at the Bronx Museum of the Arts. Curated by Christine Licata and Antonio Sergio Bessa, the exhibition presents paintings and sculptures, conceived as a coherent body of works, which explore the relationship of humankind to nature, centered on Yoruba mythology.

Manuel Mendive: Nature, Spirit, and Body runs through November 7 at the Bronx Museum of the Arts.

Martínez-Cañas & Domenech in New York. In 2012–13, María Martínez-Cañas and Rafael Domenech collaborated on a set of photo-based artworks they called the Bunker series. Starting with appropriated photographs of German bunkers, they passed the images back and forth, adding, cutting, and pasting graphic elements. Two of these Bunker works are now on view in DIY: Made in the Studio, the summer exhibition at Julie Saul Gallery in Chelsea, on view through August 17.

And Domenech in Miami. Domenech is also participating in Summer Hots, the current group show at Fredric Snitzer Gallery, Miami.

Castañeda in Miami. New paintings, photography, and a video animation are among the works in Consuelo Castañeda: Instants, on view at Dot Fiftyone Gallery in Little River. Through September 12.

This just in: Fusco wins Rabkin award. Coco Fusco is one of eight writers to be recognized by the Dorothea & Leo Rabkin Foundation’s program for visual arts journalists. The grant carries a $50,000 award. This is the second cycle of awards for the foundation, which is open by nomination only.

Teresita Fernández at Harvard. As Harvard students head back to campus next month, Teresita Fernández will unveil Autumn (…Nothing Personal), a public art installation in Harvard Yard. The installation will consist of wooden benches in three concentric circles, with thousands of polycarbonate tubes extending vertically, ten feet tall, from their backs. Each tube is embedded with fine orange and yellow lines, creating a shimmering effect throughout the park-like space, with its towering trees.

The installation is intended to convert what is normally an area of transit into a gathering place.

Fernández drew inspiration from James Baldwin’s text for the 1964 book Nothing Personal. A collaboration between Baldwin and photographer Richard Avedon, the book questioned and critiqued notions of American identity.

In a statement published by the university, Fernández said that Baldwin’s text inspired her to use “the vulnerable light of autumn as a metaphor for a nation still struggling so desperately with the same issues Baldwin so eloquently exposes.”

Autumn (…Nothing Personal) opens August 27 at Harvard University, where it remains on view through October 1.