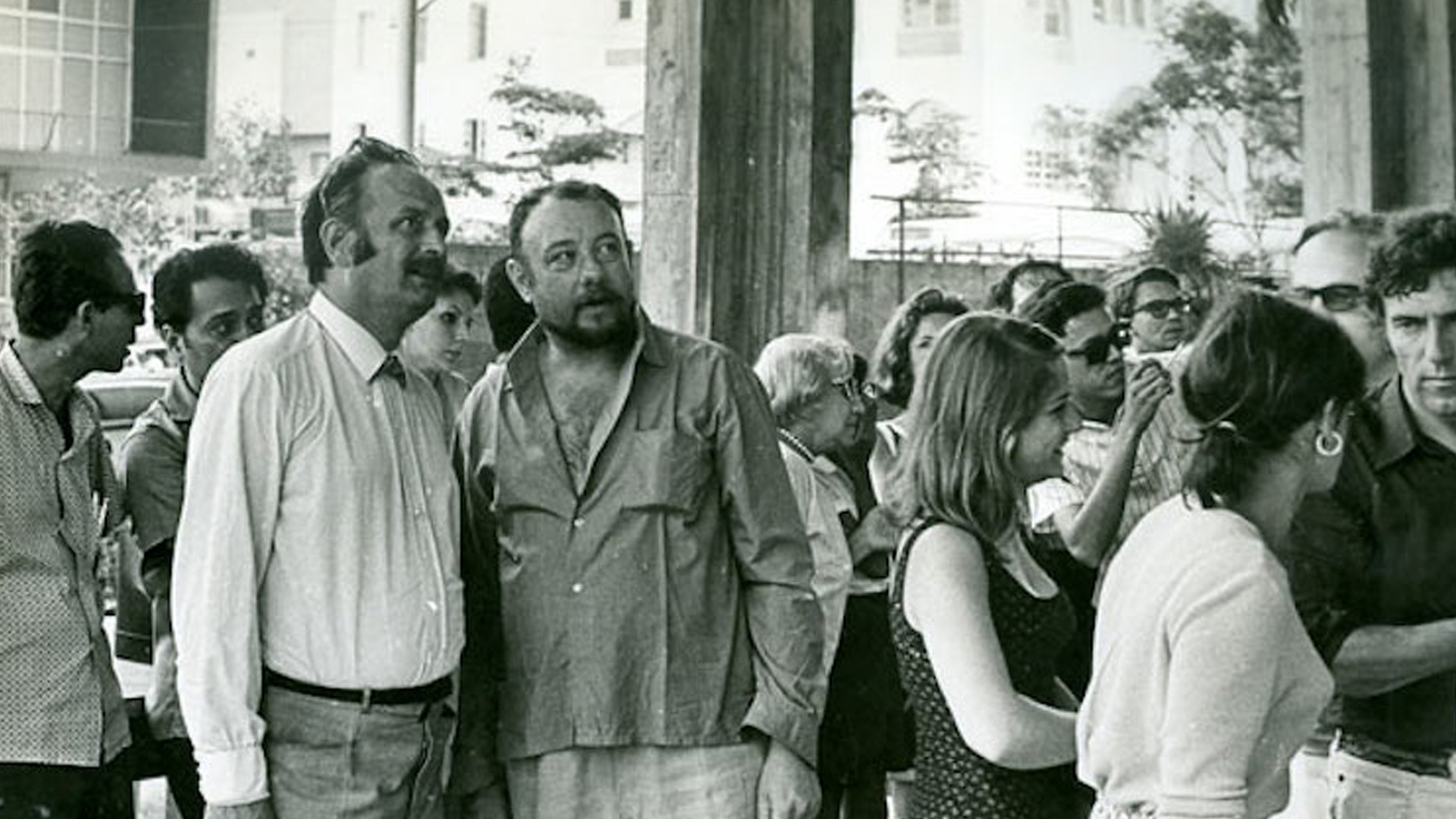 During World War II, under German occupation, a group of French artists in Paris organized the anti-Nazi Salon de Mai. The group presented its first exhibition in May, 1945.

More than 20 years later, the Salon de Mai came to Havana. It was the group’s first exhibition in the Americas.

Wifredo Lam had been a frequent participant in the Salon de Mai in Paris. In 1967 he was, with Carlos Franqui, a prime organizer of its arrival on the island.

More than a hundred artists of different generations—including Alexander Calder, René Magritte, and Lam’s friend Pablo Picasso—sent work for the exhibition or came themselves to participate in workshops, lectures, and panel discussions.

Together with leading Cuban artists, they fulfilled a longstanding ambition of Lam’s: a group mural that became known as Cuba colectiva. Spiraling out from a central painting by Lam himself, the mural stretched 10 meters long by 5 meters high (approximately 33 x 16 feet), marked out in roughly 100 different segments.

The mural was completed in one frenetic night—July 17, 1967—at the Pabellón de Cuba, the open-air exhibition space on La Rampa, the bustling thoroughfare of Vedado. In an article for La Jiribilla, Adelaida de Juan described the scene:

Painters, sculptors, caricaturists, designers, poets, narrators from different countries joined their Cuban counterparts to perform, in a hallucinated night that filled La Rampa with songs, dances, music, Tropicana dancers and public spectators, until the mural was finally finished at dawn.

Cuban artists participating in Cuba colectivaincluded Raúl Martínez, Umberto Peña, Antonia Eiriz, Mariano Rodríguez, and Fayad Jamis, among others. A segment of the mural was reserved for Fidel Castro, but he did not fill it in.

In her 2012 book about the Salón de Mayo, Llilian Llanes quoted French intellectual Alain Jouffroy, one of the participants in Cuba colectiva, who recalled the mural as “a sort of map of the cultural world as it could be seen and felt in Cuba during the 1960s.”

At the Museo Nacional de Bellas Artes, Cuba colectiva is the centerpiece of La Gran Espiral. Cincuenta años del Salón de Mayo de 1967. Curated by Delia Ma. López Campistrous, the exhibition includes a selection of works by Cuban and international artists that were shown in the 1967 Salón de Mayo and became part of the museum’s collection. Photographs and documents provide additional insights into the event and its planning.

La Gran Esprial was scheduled to close yesterday, December 11. It effectively recalled a moment in Cuban art history when, as Llanes wrote, the Salón de Mayo offered a “rich universe of artistic possibilities to a people who were rightly interested and curious. A population that deeply appreciated the opportunity to see for the first time original works of international contemporary art.”