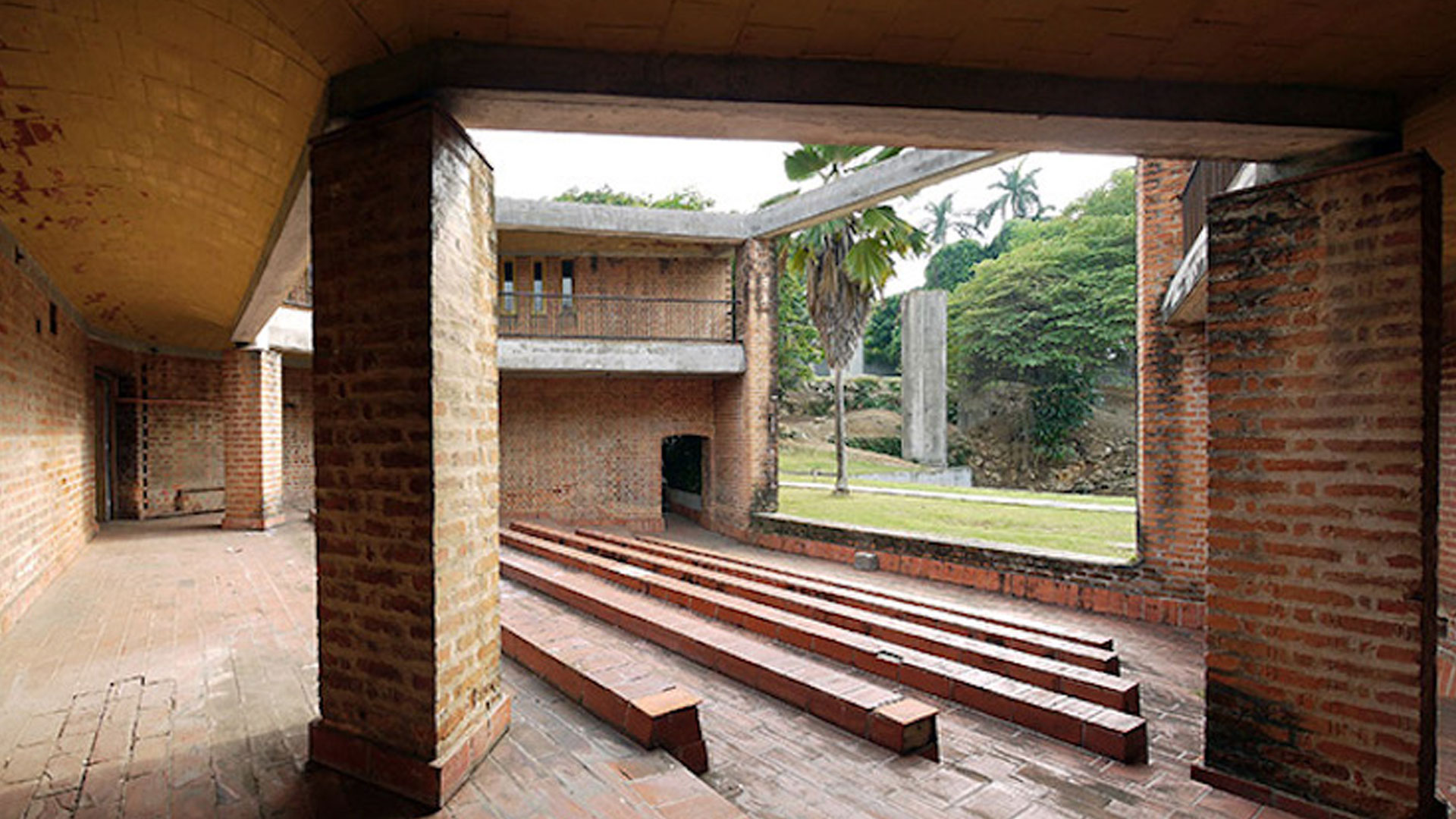 Roberto Gottardi, recipient of the 2016 Premio Nacional de Arquitectura, died August 20 in Havana. Gottardi was one of the designers of Cuba’s National Art Schools (now ISA), along with Ricardo Porro and Vittorio Garatti.

Roberto Gottardi, Cuban-Italian architect died of pulmonary failure on Sunday night, August 20, in Havana. He was one of the three creators of the most outstanding and controversial architectural achievement of the Cuban Revolution, the Escuelas Nacionales de Arte (1961–65).

Roberto Gottardi was born in 1927 in Venice, Italy to Francesco and Ida Folin Gottardi.

He graduated in architecture in 1952 from the Instituto Superiore di Architettura di Venezia in where Carlo Scarpa was his mentor and most important influence on his design. Following his studies he worked for the important post-war Milanese architect, Ernesto Rogers. There he met a Venezuelan architect who invited him to Caracas where in 1957 he worked in the architectural studio, the Banco Obrero, of the renown Carlos Raúl Villanueva.

While with Villanueva, Gottardi—with another young Italian architect, Vittorio Garatti—made a fateful friendship with Cuban exile architect and revolutionary, Ricardo Porro. After the victory of the Cuban Revolution, Porro invited Gottardi and Garatti to join him in returning to Cuba to build what was optimistically viewed as a new socialist utopia. They arrived in December 1960.

The Gottardi family in Venice was of old nobility, with more than one Doge in their lineage. However, the young Gottardi was smitten with the Cuban Revolution and the project of constructing a socialist state that would point the way to the future. He was ostracized by his Venetian family, but he never looked back.

Roberto Gottardi is best remembered for his part in the National Art Schools, situated on a site that was once Havana’s most exclusive country club. He was the designer of the School of Dramatic Arts, a seductively introverted complex with winding pedestrian paths uniting the community of classrooms and studios in a way that mimicked the intimate inward looking experience of a theater company.

Walking through the complex, with its narrow twisting vicoli that would suddenly open up to a welcoming placita, is a delightful, disorienting experience reminiscent of Venice. Construction was interrupted as the schools’ dynamic, free-flowing design fell out of favor in 1965.

Gottardi’s other accomplishments in Cuba are the National Agricultural Administration headquarters (1967–72), set designs for the Cuban Contemporary Dance company (1991), and the Prado y Neptuno restaurant (1999). He was commissioned to create a new design to bring to completion his unfinished School of Dramatic Arts, but it remains incomplete.

His greatest accomplishment, apart from the unfinished drama school, is a generation of architecture students who look back on him as their most inspiring formative influence. He had a broad intellectual curiosity and was passionate about theater, dance and music, especially Pink Floyd.

Along with Vittorio Garatti and Ricardo Porro, in 2012 Roberto Gottardi was awarded the Vittorio De Sica Award for Architecture by Italy’s President Giorgio Napolitano. In 2016 he was awarded the National Award for Architecture by Cuba. And in November 2016 the Italian government awarded him one of the prestigious Bacchelli pensions for Italians abroad who have made important contributions to international culture. Unfortunately, Gottardi was able to enjoy it for less than one year.

Nevertheless, the Italian government has pledged to fund the restoration of his School of Dramatic Arts.

Roberto Gottardi is survived by his wife Luz María Collazo, his daughter Sandra, and son Carlo.

And a warm personal remembrance by Alysa Nahmias, co-director and co-producer of Unfinished Spaces, the award-winning documentary film about the National Art Schools.

I awoke this morning to the painful news that my friend, my teacher, and subject of my film Unfinished Spaces, the extraordinary architect Roberto Gottardi, bid farewell to this world last night.

My heart immediately broke for his beloved wife Luz María, his daughter Sandra, and the rest of their family in Cuba and Italy. All day I’ve exchanged messages with our mutual friends, sharing memories of Roberto’s sense of humor, his immense talent, his devotion, and his gentle presence. The void in our lives is deeply felt already, and at the same time we celebrate what he gave us in over 90 years of life well-lived.

It’s fitting that on the morning after Roberto left, I had the rare fortune to witness a solar eclipse in Los Angeles, where I live. This was significant not only because one of Roberto’s favorite albums was Pink Floyd’s «Dark Side of the Moon,» but also because the celestial scale of the eclipse made me feel closer to faraway Cuba.

I stood in awe of the fragile magnificence of this world, realizing how the chances must have been like that of the Moon crossing the Sun’s path for me to be in Havana as a 20-something norteamericana and to meet none other than Roberto—and that our convergence would result in our making a movie together.

When I first met Roberto in 2001, he was an 80-something mustachioed man who I thought resembled Don Quixote. He had been told I wanted to study Cuban architecture, so he sat down with me at a table on the patio of the Ludwig Foundation in El Vedado, showing me a folder full of weathered photographs and documents relating to his masterpiece of modern architecture, the Escuela de Artes Dramáticas at Cubanacán.

I told him I wanted to see the structure in the flesh. He drove me to the art schools campus in his little red car and gave me a tour. We spent a few hours there, during which every stereotype I’d brought with me to the island was challenged. As we were leaving, I told him I thought that someone should make a film about the buildings and the architects’ stories.

I talked about how it would be impossible to capture the promenade architectural of Roberto’s design and those by Ricardo Porro and Vittorio Garatti in text or still photography. It had to be a film, in my mind. When I told Roberto the idea, he challenged me with playful seriousness that I would grow very fond of over the coming years: «Why don’t you do it?» He knew I had never made a film.

As a 20-something, Roberto had journeyed from his native Italy to Venezuela and then Cuba to participate in building boom in Latin America in the 1950s. He was brave and bold, handsome and ambitious. I wish I could have known him then, when he studied with Carlo Scarpa, sneaked into a photo of Frank Lloyd Wright on the street in Venice, and worked with Raul Carlos Villanueva in Caracas.

When I returned to the U.S. after that first meeting, I felt possessed by the stories Roberto had told me about his first months and years in Cuba. I teamed up with Ben Murray to embark on the making of Unfinished Spaces. Ben and I would visit Cuba several times over the next few years.

The filming of a documentary is intimate under any circumstances, but in the Gottardis’ small apartment in Havana it was even more so, and we grew close with Roberto and Luz María. They were always generous and eager to talk with us about art history and Hollywood films alike. They introduced us to friends and over time helped us build the trust we needed to interview artists and architects about some of the most joyous and devastating times they had lived through on the island.

Roberto’s School of Dramatic Arts remains unfinished. Ironically, the theater itself is the primary void, as it was never built after the construction of the schools stopped in 1965. This absence was a hardship on a theater school, yet it caused students and faculty to have to think more creatively and to discover new spaces for theaters on the campus over the years, to let their performances take place in the «streets» of Gottardi’s building’s hallways or on its rooftops.

Through this incomplete masterpiece, Roberto acutely understood the dark poetry that our work here is never complete, that buildings and people and ideologies tend to deteriorate in the cycles of nature. At the same time, as he drew and redrew his plans to complete «mi escuela,» as he called it, he held onto the hope for the future, for completion. He would not give up on his architecture or the people for whom he created it, in particular «el pueblo cubano.»

When Roberto came to the U.S. for the world premiere of Unfinished Spaces at the 2011 Los Angeles Film Festival (ten years after he dared me to make the movie with him in Havana), I think he was surprised by the lengthy standing ovation that he, Garatti, and Porro received at the end of the sold-out screening. This happened not only in L.A. but also in Havana and Miami.

As audiences whistled and clapped when the architects took the stage, Ben and I would look at each other knowingly. We smiled because we knew people were applauding for the architectural accomplishments but more so for the architects. Roberto was a real big-screen hero; he was vulnerable, valiant, and visionary. It has been a tremendous gift for Ben and me to have crossed paths with him and to share his story and his architecture with the world.