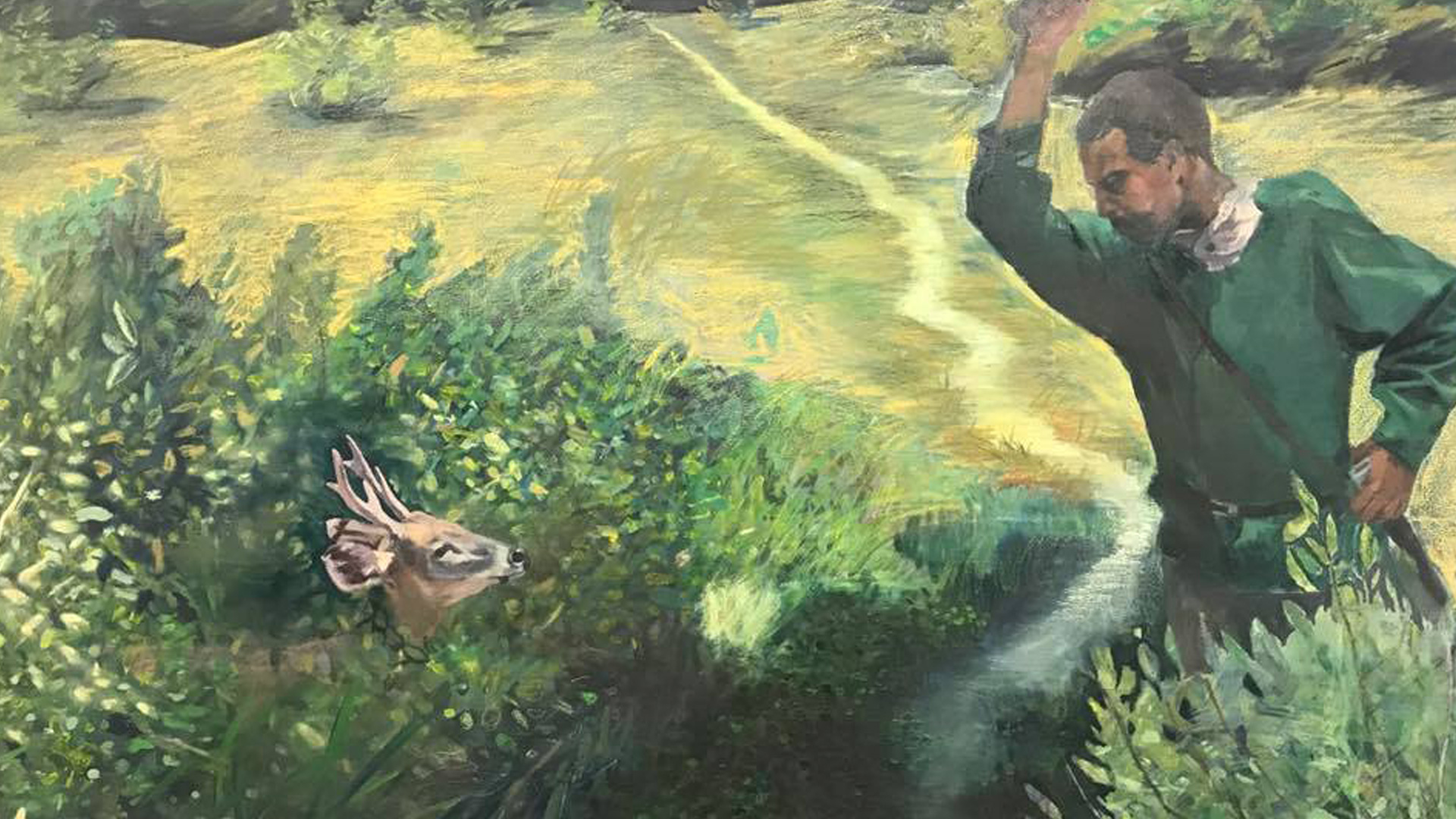 For José Manuel Mesías, history is the raw material of art, and much more. Filling two floors of Factoría Habana, his current show turns the genre of history painting to distinctly untraditional ends.

While some artists turn their attention to universal themes, Mesías delves deeply into the visual representation of Cuban history and its metaphors.

Re-examining revered legends and historical facts, he exercises a certain scientific curiosity and an eye for odd artifacts. The result is a post-modern cabinet of curiosities, and an alternate reading of the nation’s 19th-century past, especially the wars of independence.

Even viewers who are not familiar with the episodes Mesías examines are likely to find parallels with contemporary culture and how history and facts are interpreted.

Midway through its run, we take a photo walk-through—partial at best—of José Manuel Mesías: Índice de imágines, on view at Factoría Habana through October 20.

In one of the largest works in the exhibition, Mesías examines a 1908 painting by Armando García Menocal, La muerte de Antonio Maceo. Menocal’s painting depicts the death in battle of Maceo, the second-in-command of the Cuban Army of Independence, in 1896.

According to historian Antonio Álvarez Pittaluga (in his 2012 essay «The Fall of a Hero and the Kidnapping of a Myth«), Menocal’s canvas shows the instant of Maceo’s death, as his followers struggle to remove his inert body from the field of battle.

Following Pittaluga’s analysis, Mesías breaks this down into a four-part sequence: 1) Maceo is wounded and falls from his horse; 2) a small group surrounds him, stupefied by the reality of his death; 3 ) the attempt to remove his body from the battlefield (which is the subject of Menocal’s painting); and 4) the rescue of his body, along with the body of his compatriot, Francisco Gómez Toro.

In addition to the four studies, Mesías painted the large-scale Corrections to the work of Armando Menocal ‘La muerte de Maceo.’

Dreams and visions also play a part in Mesías’s scenario. Here, he paints four versions of Maceo’s death as dreamed by Manuel Piedra, another commander in the Cuban War of Independence. At top, “The conjuring of the birds;” below, from left, “The Lightning,” “The Incineration,” and “The Mountain.”

In another work, Mesías depicts a vision of Juan Eligio Ducasse, another colonel in the War of Independence.

Ducasse was one of many War of Independence leaders of Afro-Cuban descent. Pedro Díaz was another. Below, Mesías pictures him adding stars to his uniform.

Botany also comes into play in the exhibition. Hortus Conclusus, seen in the image at the top of the story, horizontally bisects one large composition to focus on its plant life. On a nearby wall, Mesías groups 21 individual studies of “undesirable” plants.

There are more aspects to the exhibition, but we cannot end without a glimpse of at least one example of its taxidermy works.

This piece is labeled “Fine rooster that belonged to José [Antonio] Maceo and the peacock killed by him.” An exhibition note states that the improvised cockfight may have taken place at a time when Maceo was convalescing from a battle wound at the end of 1895.

The ad hoc taxidermy would have been done by a doctor, cook, or perhaps an assistant to the rooster’s breeder. The note goes on to say that scholars give scant credibility to the work’s authenticity, “given the hunger for artifacts that prevailed among Maceo’s followers, and the history of false relics from the era of the Republic.”

For more on the exhibition, see the Factoría Habana Facebook page.