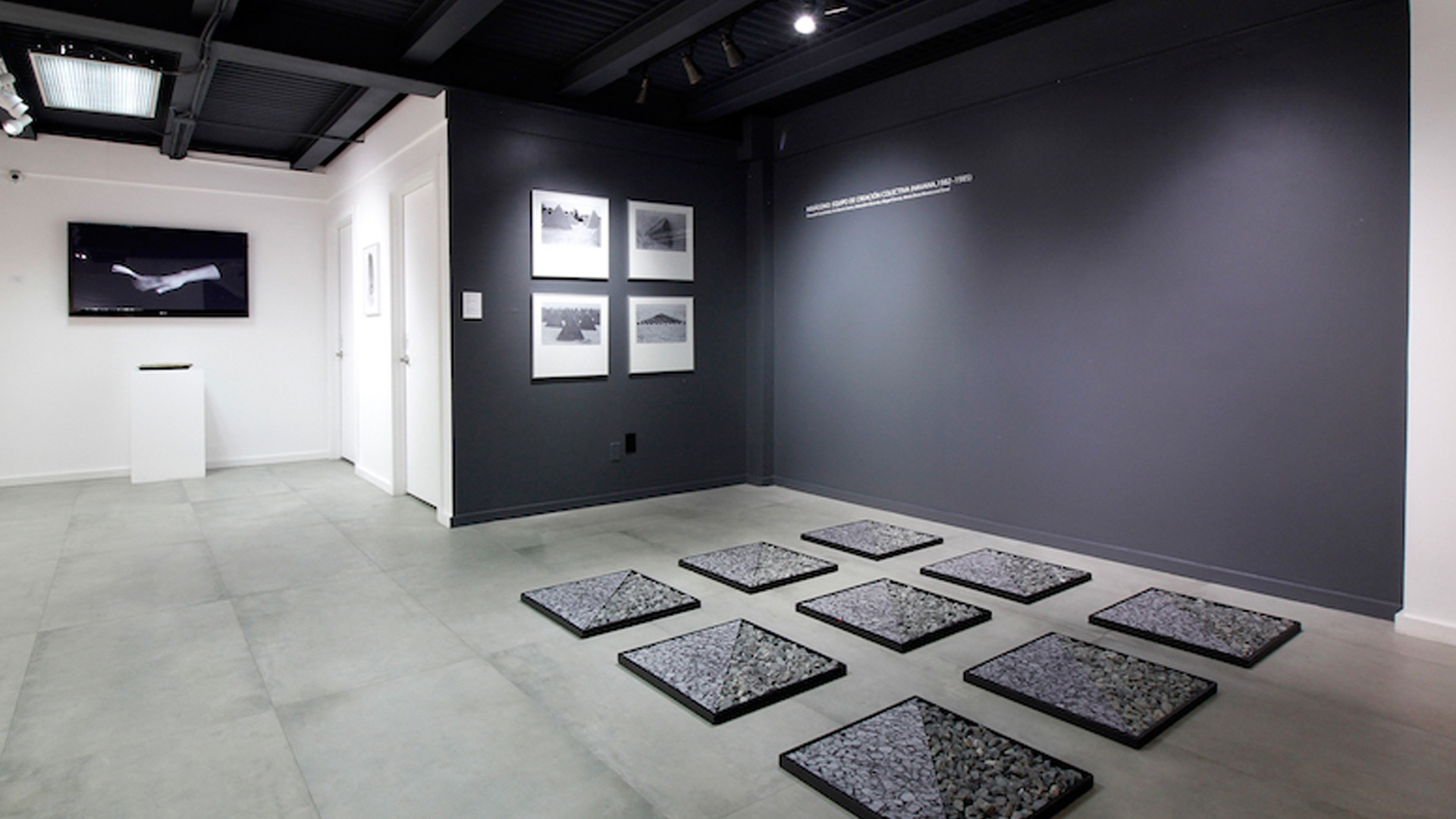 As many readers know, Cuban Art News has an interest in exploring less well-known aspects of Cuban art history. Here, critic and curator Elvia Rosa Castro brings us up to date on the 1980s art group Equipo de Creación Hexágono, and the current exhibition featuring its work.

Curated by Aluna Curatorial Collective (Adriana Herrera and Willy Castellanos) The object and the image (this is not a chair either) opened this spring at the new and promising Concrete Space Projects in Doral. Aluna, known for producing excellent curatorial projects, has once again demonstrated that its heart—and mind—are in the right place.

They agreed to work with a space that’s more or less in the middle of nowhere, far from the usual Miami art districts and surrounded by dust—a lot of dust. But they felt a powerful empathy for that setting. Concrete Space Projects is a perfect venue for The object and the image, which favors small and medium formats for its photographs and objects.

The object and the image (a paraphrase of Michel Foucault’s Les mots et les choses, “The Words and the Things”) brings together photographs that reflect on the ability to unfold an object within another object, and to alter its traditional use value. The exhibition also presents the object itself, the «original,» not as raw material but giving it the autonomy or weight of any installation work or sculpture.

This is perhaps the first exhibition in which such a revelation occurs. And as indicated in the second part of the exhibition title (“this is not a chair either”), in reference to the well-known Ceci n’est pas une pipe of René Magritte, the show points to the entrails of the representation. The thing in itself in the other thing in itself and so on. The mystery of the ordinary or The Anxious Object.

To expose artifice through the display of another artifice proves that in these photographed hybrids there is, contrary to what many may think, zero Photoshop. The viewer also discovers, after the coolness of the photographic image, a warm, handmade work. The exhibition brings up the epistemological revenge of all time: the deception of the object.

«I always prefer to work in the Studio. It isolates people from their environment. They become in a sense … symbolic of themselves,» photographer Richard Avedon said. The methodology of the pieces collected in The object is the same. Result: works that resemble advertisements for dystopian realities. «A minefield that questions, in many ways, the stable condition of the order of things and the surrounding reality,» the curators explain.

The only works in the show that don’t fully fit this methodology are by the art group Equipo de Creación Colectiva Hexágono. Their inclusion reflects no small amount of historical research. We’re talking about a short-term group (1982–1985) that has been studied by later generations only through a few short texts, or images damaged over time.

To recover and reactivate its archives, to establish new links between its members, and to bring back into the public eye the first self-aware art collective on the island, whose work did not depend on the individual production of its members—and was the only group in Cuban art history to focus on Land Art—has been an enormous contribution on the part of The object and the image, not only curatorially but historiographically.

In addition to photographic documentation of the group’s Arenas series, «the exhibition allowed us to see the iconic work Piedra 1 (1983), an installation originally composed of 16 square wooden modules, arranged on the floor and consisting of thick gravel shaped into diagonal triangles, and the photographic record of those same stoneworks, trimmed to exactly the same proportion—the object and the image,” wrote Adriana and Willy.

“In this way—and unlike other works in the show—the image is incorporated into the object itself as a single piece. This raises the famous paradox that Borges establishes between the map and the territory, when both have identical dimensions. Photography doubles as a mirror to the material, making it difficult to distinguish between one and the other, activating the game of illusions that mediate between reality and its photographic representation,” they continued.

Piedra I is a visually tautological piece, in which the idea of ​​the original and the copy is strongly fixed. Standing before the work, one feels the grace and prodigious touch of this art-making collective. I marveled, much as I did with the work of Gustavo Pérez Monzón in his show at the Museo Nacional de Bellas Artes in Havana.

Salon Paisaje ’82 was the space where Equipo Hexágono presented, for the first time, the photographic record of its inaugural conceptual incursions in the landscape: Loss and recovery of a landscape Homage to van Gogh and Six friends visit a landscape.

These actions were carried out in the Viñales Valley in May 1982, when the multisection team was formed by Consuelo Castañeda and Humberto Castro; Sebastián Elizondo and Abigail García Fayat; María Elena Morera and Antonio Eligio «Tonel.»

The works by Hexágono bear the authorship of Hexágono, and do not resemble, at least not resoundingly, the works of its individual members. Perhaps one reason is the circumstances of the group’s emergence: disinterested, one might say, more in the way of an amusement or a picnic, out there in Viñales, far from any art scene.

Perhaps for that reason their actions at that time were the most sensual and theatrical, the most endearing and epicurean.

It’s easy to deduce a direct relationship between Hexágono and Land Art artists like Richard Long and Robert Smithson. Hexágono worked with the freedoms offered by the land itself, at times dislocating its usual channels with a minimal gesture, introducing a certain order into the natural chaos (which already has its own order)—measuring it as a surveyor would, structuring that order into compositions of minimalist geometric visuality. Hexágono was up to its neck in the creative, liberating logic of Cuba in the 1980s, especially the first half of the decade.

Herrera and Castellanos underscore the relationship between object and image in Hexágono’s work. “Certain pieces such as Piedra 1 or Cascada, for example—all of them included in the 1983 exhibition—proceed from the assumption of the mirror image, or from a transition similar to that ocurring in the negative-positive process of the photographic image,” they noted. “Others, like Tierra, are reconstructed in inverse and no less photographic relationships of their volumes: the space of earth hidden in one plane, ends up duplicating itself in another, as under the effect of an inverted image, of a negative.”

The object and the image (this is not a chair either) continues at Concrete Space Projects through June 24.