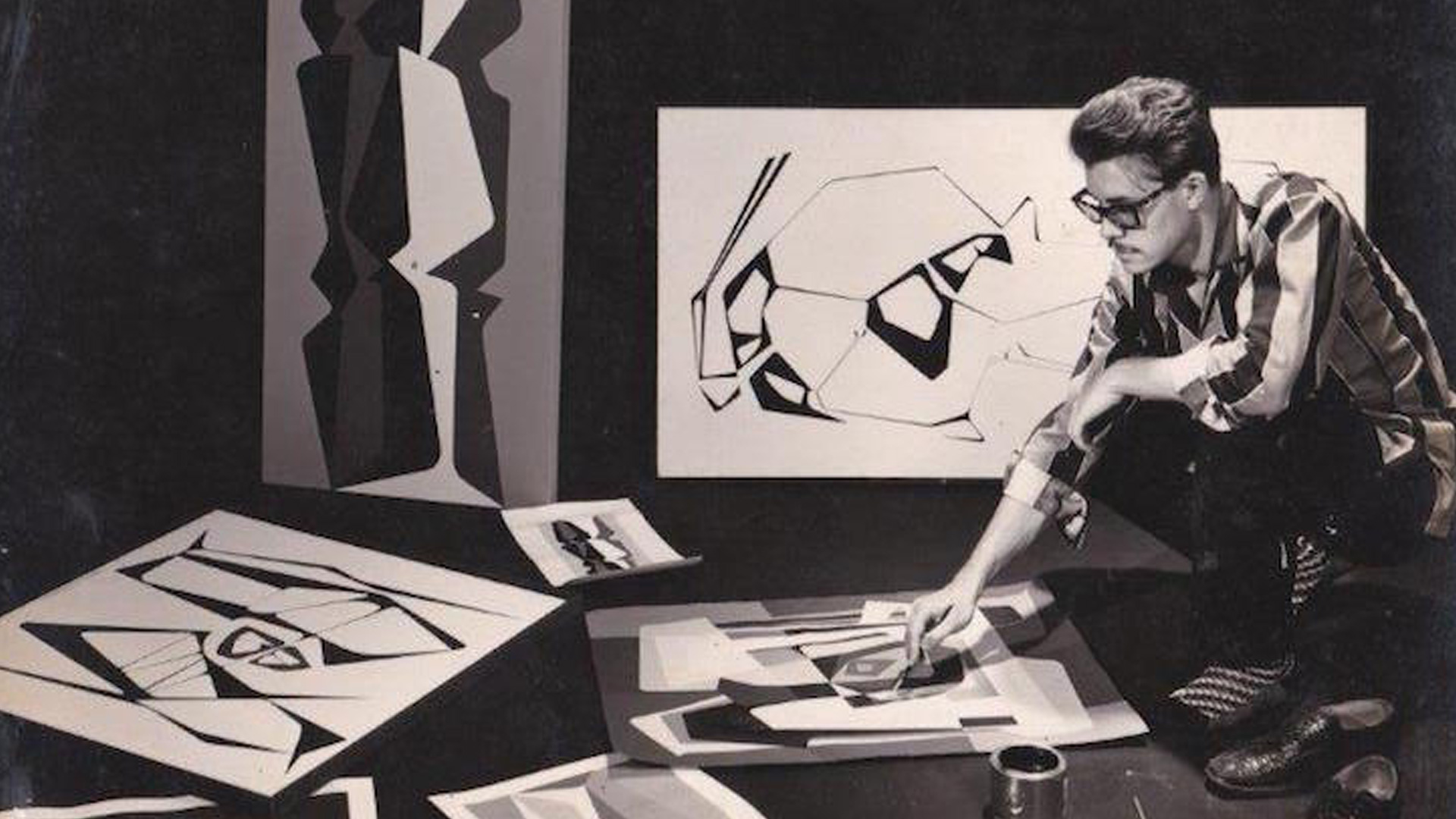 We know at least two things about the Cuban Premios Nacionales (National Prizes).

Announced late last year, abstract painter Pedro de Oraá now has his own Premio Nacional en las Artes Plásticas (Visual Arts). But, he says, he is alone—most of his generation have gone elsewhere, out of this world. His award, more than most, is late.

However, this seems to be, as never before, the moment for Cuban abstract painting on the international art scene. The current exhibition of Carmen Herrera—at 101 the grand dame of abstract painting—at the Whitney Museum (extended through January 9), the recent exhibition of Cuban Concrete Art at David Zwirner Gallery in Chelsea, and research and exhibitions in Miami and Los Angeles have broken the silence about a flowering, in the 1950s, of Cuban abstract art. Pedro de Oraá is living testimony—one of the last—of this movement, already recognized in the history of Cuban art.

Says de Oraá: «I have worked for a long time, accustomed to silence, but without feeling myself banished to the corner by the drumbeat of the new cavalry and the banners of its triumphal new emblem.» Of his 84 years, more than 50 have been marked by his artmaking, and have made him today a symbol of the Cuban abstract movement.

For that reason, perhaps few people know about his attraction to portraiture and still life, brief moments of distraction that offer a manner of repose. «I do not belong to that guild of abstract painters who could do nothing but abstract painting,” he says.

At this point in his career, and without excessive egotism, de Oraá wants his work to move and be moved, «to occupy spaces beyond the gallery walls and museums, in outdoor areas, where all people could enjoy the work.” Even with his long career and the hypothetical tranquility that recognition might give him, he says: «Now, as always, is the most difficult moment of my career: the work completed yesterday is long past.»

We speak about the art market, 20th-century avant-gardes, postmodernism, about his  contemporaries, and also of the new mediums and technologies: «In the 1960s and 1970s, the experimentation was not so diversified (at least among us),” he says. “Combinations and applications from the rupture of genres have gathered momentum today. There is contempt for traditional mediums. But the only way to express yourself in painting,” he says, “is by painting.»

With Pedro de Oraá, one feels the strange need to go back in time, to inquire into a generation of creators, long undervalued, that are today a crucial element in the history of Cuban art.

Do you feel the need, at this point, to reference other figures in Cuban art who are related to your career?

In the speech I gave when I received the 2015 Premio Nacional de Artes Plásticas, I alluded to painters such as Salvador Corratgé, who deserved this recognition for his professional career, and whose recent death has frustrated an opportunity for justice. I also mentioned Antonio Vidal, whose Premio Nacional in 1999 signaled, at last, the «approval» of abstract art in Cuba, and who himself was one of its most valuable representatives. I had a close relationship with both of them. And let’s not forget, all friendships are consolidated by both affinities and admitted differences.

You’re frequently linked to the group Los Once [The Eleven], but you never exhibited with them.

It’s not a mistake to include me in Los Once, once you know that it was an open, inclusive “congregation” of artists of that generation. The numeric name of the group was circumstantial. Only eleven artists responded to the open call for the first exhibition, held in 1953. So that’s how the group came to be identified.

In subsequent shows, that number gradually dwindled down to five, before the group collapsed in 1955. I never showed with them because I thought my work had not yet advanced enough. But I was very involved as a collaborator in the meetings and activities. The role that this group played in positioning another visual concept in Cuban art was immensely important.

You were a member of the Diez Pintores Concretos (Ten Concrete Painters) group. From your perspective, what defined this group and its role in Cuban art?

The phenomenon of “retro” is common in fashion, but not so much in the visual arts. But I would say that, by virtue of the “retro” phenomenon, right now geometric abstraction has come into a boom, to an extent that it did not enjoy in the 1950s or the early decades of the 20th century.

There is a growing demand for this rediscovered aspect of abstraction at art fairs, auction houses, and galleries, in open confrontation with the various tendencies imposed on the art market by the epidemic fever of “postmodernism.”

In the case of Cuba, the existence of the Diez Pintores Concretos group from 1958 to 1961 has almost been systematically omitted from the few studies on Cuban art before 1959. The significance of the group is perhaps based on the fact that it closely aligned its aesthetic praxis with the vigorous movement of concrete Latin American art, evident in Brazil, Venezuela, Colombia, Argentina, Uruguay, and Chile.

Because of its implicit connection with graphic and environmental design and architecture, proponents of Concrete Art have always understood the potential for social projection inherent in the abstract-geometric basis of this art and its broad application. Sandú Darie, Luis Martínez Pedro, and other members of the group bequeathed public works that are a striking example of social utility.

At that time, the influences on the abstract movement were more external than arising from Cuban reality itself. How did abstract artist get involved with and represent the Cuban situation that they were part of?

We have to remember, the Diez Pintores Concretos group went through the country’s own process of transition, from a phase of political and civil upheaval and bloody struggle against a dictatorship, to another phase of liberation and economic and institutional restructuring.

Abstract artists were labeled «escapists» from reality—before and after times of change—because of a certain line of critical thinking that was already giving off a strong dogmatic odor, out of an ignorance of the revolutionary origins and nature of 20th-century avant-garde and abstractionism.

We had some desertions in the group, even before 1959, but those of us who remained here did everything we had to do—above all, to join in on the art socialization programs already under way.

Regarding criticism, one of the “classic” texts of this time is the essay by Juan Marinello, “Conversation with Our Abstract Painters,” which was not exactly in favor of the movement.

I have never been able to explain how an intellectual like Juan Marinello could write such a misbegotten essay. Art history bears the responsibility for condemning the conjectures, assertions, and advice contained in those pages.

The abstract movement has proved to be an introspective path of human expression, an inquisitive interpretation of non-visible reality, and has been shown to be neither an ism nor mere fashion. Its resistance and validity in time has brought it—now, at this moment—to young generations.

Los Diez were concerned about deepening the art experience, an affirming response with respect to national identity and art, a topic that is currently so manipulated. (The Aguas Territoriales cycle of works by Martínez Pedro is representative of this group inquiry.) We quickly grasped the arbitrariness of this search for identity—you have it or you don’t, but if you pursue it, you lose it.

The assimilation of foreign artistic movements didn’t mean mimicry, but the absorbing of information and a natural habit of feedback—especially if you’re talking about an aesthetic trend, such as Concrete Art, that draws from many sources. As a whole, abstract art made in Cuba has been inserted into the discourse as an irreversible expression of our culture.

The reality of this fact is a resounding refutation of the point of view advanced by Marinello in his Conversación.

Did abstractionism, at some point, take as a manifesto the goal of removing its art from the common understanding of the viewer?

Although groups of Cuban artists are not accustomed to defining positions by manifestos—which were common in European movements and Latin American groups—there is the exceptional precedent of a certain declaration made by former members of Los Once, in which they expressed an intention to not take into consideration the ineptitude of the common viewer in interpreting abstract art.

I do not believe that an artist can really have this communication problem as a premise at the moment of creating, and even less the basic position of distancing the work from the potential viewer. It’s a valid question for all art. Why limit it to abstraction and abstract artists?

From a formal perspective, how do you define yourself as an abstract painter?

An abstract artist perceives and deciphers reality as interiorization and not as environment and surface. Reality is changing and relative, but the object of abstraction is to fix it in its invisible aspect. The abstract object is installed in the space of reality—whether painting, sculpture, or other created form—and becomes an unknown object, but real and concrete in its space.